Coral reef aorta (CRA) is a rare condition characterized by atherosclerosis and overt aortic calcification leading to severe luminal stenosis. Few reports describe CRA complicated by infected aortic aneurysms [1]. We describe a method of surgical treatment for this condition, and our case highlights the difficulty of treatment planning.

A 61-year-old woman with minimal risk factors for lifestyle diseases was referred to us because of chest pain on effort and easy fatigability while walking. Computed tomography (CT) showed overt aortic calcification of thoracoabdominal aorta: coral reef aorta (CRA) (Figure 1). She met the American College of Rheumatology classification criteria of claudication of the extremities, bruit over the aorta, and arteriographic abnormalities [2].

Her C-reactive protein level was low, so she was diagnosed as chronic and inactive Takayasu’s arteritis (TA). Moreover, coronary CT demonstrated no significant stenosis, so we monitored her symptoms. Five months later, she was admitted to our hospital with a fever and pain in her right wrist. CT showed no special findings except for CRA. Blood culture indicated Streptococcus pneumoniae; therefore, we diagnosed phlegmon and initiated antibiotic therapy. On admission day 12, she suddenly developed lumbar pain. Enhanced CT showed two thoracoabdominal aortic saccular aneurysms; the cranial aneurysm indicated impending rupture from the 7th to 8th thoracic vertebrae, and the caudal aneurysm extended from the 10th to 12th thoracic vertebrae (Figure 2). 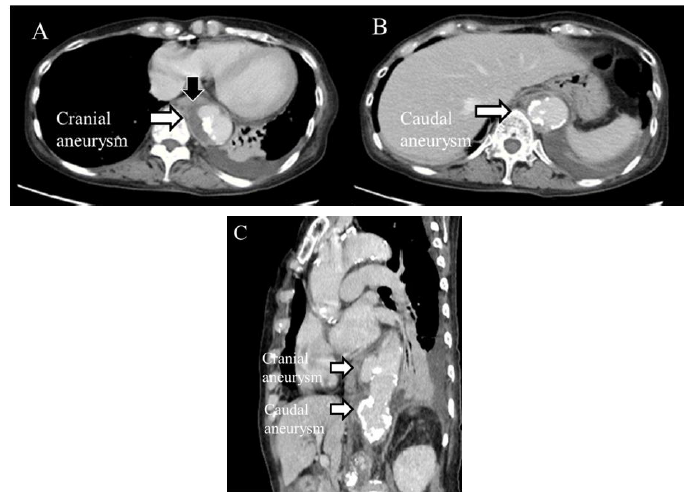 Moreover, it revealed occlusion of celiac artery (CA) and superior mesenteric artery (SMA) due to severe calcification. We diagnosed infected aortic aneurysms according to the positive blood culture results (Streptococcus pneumoniae), liquid accumulation around the cranial aneurysm, and aneurysmal morphology. It was most important for us to prevent their rupture. Therefore, we performed emergent thoracic endovascular aortic repair (TEVAR) only for the cranial aneurysm with impending rupture, because it was difficult to place a stent distal to the caudal aneurysm because of the severe aortic calcification (Figure 2C). We used transsubclavian access because the CRA made it difficult to use transfemoral access (Figure 1, 3). An 18-Fr introducer sheath was inserted for delivery of the main device. Two 32-mm × 45-mm ExcluderR devices (W. L. Gore & Associates, Flagstaff, Ariz) were deployed uneventfully (Figure 3).

We successfully performed TEVAR and continued enough antibiotics, but the caudal aneurysm gradually increased in size (Figure 4C, D, and E) and C-reactive protein level did not decrease to the normal ranges. 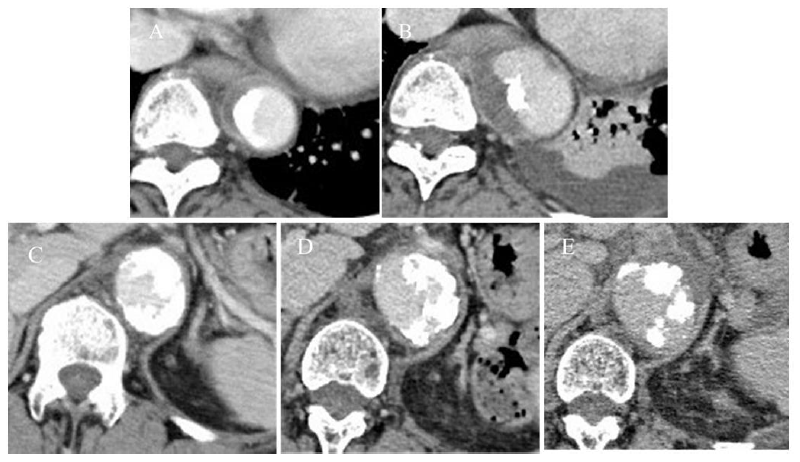 We performed open thoracoabdominal aortic repair on admission day 35. To prevent spinal cord ischemia, preoperative cerebral spinal fluid drainage was instituted. The right common femoral artery and vein were cannulated for partial cardiopulmonary bypass. We made a circumferential diaphragm incision, dissected the thoracic aorta and thoracoabdominal aorta and clamped the aorta proximally at the 6th, and distally at the 9th, intercostal space under partial cardiopulmonary bypass. We opened and transected the aorta, removed the stent graft, and thoroughly debrided the aortic wall. A rifampin-soaked graft (J graftR with four branches; Japan Lifeline Co., Ltd., Tokyo, Japan) was sutured to the proximal aorta. We released the proximal aortic clamp and repositioned the clamp between bilateral renal arteries (RAs) and the inferior mesenteric artery. The thoracoabdominal aorta was opened longitudinally, and the RAs were cannulated with 8-Fr cannulas and perfused. We removed overt calcification, back-flow from CA and SMA was confirmed and we completely resected the infected thoracoabdominal aortic aneurysm and tissue. The intercostal artery at the 12th intercostal space, which we believed was connected to the Adamkiewicz artery, was reconstructed with an 8-mm tube graft and anastomosed to the prosthetic graft. The other patent intercostal and lumbar arteries were then ligated. We reconstructed bilateral RAs, CA and SMA with the prosthetic branches and completed the anastomosis to the distal aorta. (Figure 5). 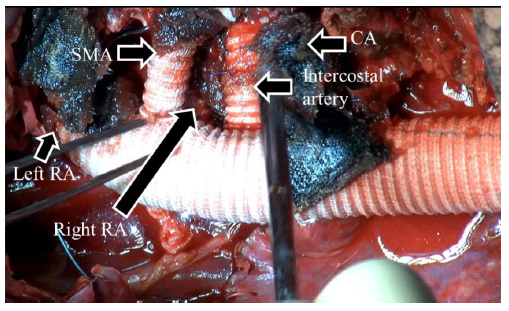 The postoperative course was uneventful, and the patient was intravenously treated by antibiotics for 1 month and discharged without morbidity. She is visiting outpatient clinic without recurrence of inflammatory symptom, taking oral antibiotics 9 months after surgery.

Figure 6: Histopathological examination of the resected aorta. Purulent inflammation (A, white arrow), and plate-like calcification (B, white arrow) in the intima.

The pathophysiological basis of CRA is unknown. Some authors suspected infections [3], TA [4], or local amyloidosis3 as the disease underlying CRA. Other authors suggested that exogenous trauma with an extensive repair process in the dissected aortic wall may cause excessive calcification [3, 4]. Our patient was never treated for TA, and we assumed that chronic TA caused CRA. CRA complicated by infected aortic aneurysms is rare and needs precise surgical planning [1]. In recent years, endovascular repair has developed and we think that strategy for CRA with infection has changed. So, we prevented infected aneurysm rupture with CRA, using TEVAR as bridging procedure, and successfully treated it by graft replacing.

In TEVAR, we used trans-subclavian access, though a femoral artery approach is the most common for TEVAR. In cases of CRA, access and the TEVAR landing zone were limited because of the overt calcification. So, precise treatment planning for CRA before operation is necessary. TEVAR is easier to perform than open repair in an emergency and is useful to prevent rupture, because TEVAR does not need cerebral spinal fluid drainage in many cases and is performed by small incisions, on supine position and two-lungs ventilation. TEVAR could save us more time than open repair. The risk of persistent infection may be important in the situation where sepsis is ongoing. TEVAR is reported to be effective and a durable option for patients with infected aortic pseudoaneurysms [5]. So, we performed TEVAR at first as a bridging procedure to save the patient from aneurysms rupture, and finally thoracoabdominal bypass grafting. If TEVAR is impossible according to access, landing zone, atherosclerosis, and vascular diameter, open repair should be required at first even if it is in an emergency. Open repair for infected aneurysm has been a reliable procedure for a long time, however, less invasive TEVAR should be considered as a bridging or a destination procedure in recent era.

Rapid surgical treatment is required to prevent rupture of infected aneurysms. TEVAR is easier to perform than open repair. TEVAR is effective as bridging procedure before open repair in an emergency.

All authors declare no conflicts of interest and no funding.