The sternal cleft is a rare anomaly occurring in 1 in 50, 000 – 100, 000 births. It results from either partial or total failure of sternal fusion early in embryological development. A few causes such as riboflavin deficiency, alcohol abuse during pregnancy, and disruption in the HOX-B4 gene have been postulated. Although asymptomatic, clinical diagnosis is easily made at birth due to the obvious chest defect and abnormal movements of the thorax. Surgery is indicated to prevent mediastinal injury, respiratory and hemodynamic sequelae, allow optimal growth of the chest, and cosmesis. We report a case of superior sternal cleft and skin defect associated with isolated ostium secundum type of atrial septal defect in an apparently healthy term female newborn. This is to create awareness among Paediatricians on this very rare type of congenital anomaly that should warrant further investigation for aetiologies and full evaluation in Nigeria. Also, to share the knowledge that will aid counseling of affected families because of possible environmental/social causes, and concerning recurrence in other siblings due to a genetic predisposition.

The sternal cleft is a rare anomaly occurring in 1 in 50, 000 – 100, 000 births. Globally, it is a very rare chest wall deformity, with a dearth of such case reports from Africa [1]. It accounts for <1% of all chest wall deformities and corresponds to type 11 chest deformities from the Willital classification [2, 3]. Embryologically, the sternum is formed by the medial migration of cells from two bands of the lateral plate mesoderm present on either side of the developing chest wall with the process of fusion completing between 7th -10th week of intrauterine life. This starts cranially at the manubrium and finishes distally at the xiphoid process. A sternal cleft results from either partial or total failure of sternal fusion early in embryological development [4].

Depending on when the developmental process stopped, the sternal cleft may be partial or total. In total sternal cleft, the two halves of the sternum are entirely separated. The partial sternal cleft can be superior or inferior [5]. The superior cleft is often associated with malformations like facial haemangioma or abdominal raphe while the inferior cleft is associated with either ectopia cordis alone or as pentalogy of Cantrell [6]. A superior partial cleft is either a U-shaped defect with the cleft ending at the level of the fourth costal cartilage or a ‘V’–shaped defect if the sternum is cleft to the xiphoid process. Inferior clefts are rare and are usually associated with other abnormalities of midline fusion [1].

We present a case of term female neonate delivered with superior sternal cleft and skin defect with an incidental discovery of an atrial septal defect.

A term female neonate was delivered to a 32-year-old now para 2 woman at a gestational age of 40 weeks through caesarian section (C/S) on account of a failed attempt at vaginal delivery. She had a history of one previous C/S. The baby cried well at birth with an Apgar score of 9 in one and 10 in five minutes. Her birth weight was 3.5kg while her head circumference and length were 35cm and 51cm respectively. Mother received antenatal care at Alex Ekwueme Federal University Teaching Hospital from the second trimester of pregnancy and was regular with her visits. She did not have a fever or rash in her first trimester of pregnancy. She was non-reactive to retroviral screening, hepatitis B surface antigen, and venereal disease research laboratory tests. She did not use any form of alcohol, cigarette, marijuana, or herbal medication during the index pregnancy. She took her iron, vitamin B complex, folic acid medications as prescribed and her pregnancy was uneventful. She had ultrasonography in the second trimester of pregnancy which did not reveal any fetal anomaly. She had a miscarriage at 3rd month of pregnancy.

Physical examination revealed a term female neonate with a 4 × 5cm ‘U’-shaped concave defect involving the upper two-thirds of the sternum. At the distal part of the defect are a spot of deficient skin and a subcutaneous wound covered only by a transparent epidermal layer of about 1cm in diameter and visible cardiac bulge and pulsation. While crying, the bulge of cardiac structures was noted over the defect (Figure 1b). Her heart rate was 144 beats/minute, respiratory rate was 58 breath/minute and the first and second heart sounds were heard, they were normal and there was no audible murmur. Other systemic examinations did not show any abnormalities.

The anteroposterior and lateral views of the chest radiograph showed increased interclavicular distance and deficiency of the superior part of the sternum sparing the distal ¼ of the sternum (Figure 2). Two-dimensional echocardiography revealed a normally located heart in its pericardium with an 11.4 mm ostium secundum ASD. The abdominal ultrasonography did not reveal any abnormality. The full blood count on the first day of life showed a total white cell count of 13 × 109/L, neutrophil of 68%, and lymphocyte of 30%, and blood film was normal. A primary diagnosis of the superior sternal cleft was made. The second diagnosis was the ostium secundum type of atrial septal defect. The baby was admitted and prophylactic intravenous antibiotics were given for the first three days because of the skin defect. The deficient skin was covered with sterilized gauze and the baby placed on SpO2 monitoring which showed normal reading. The baby remained stable and was discharged four days later for planned primary repair of the sternal cleft as soon as the parents are financially capable. Baby is well, being followed up and was last seen at the newborn clinic a week ago. 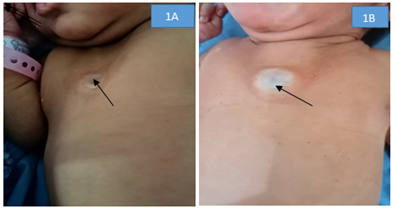 Figure 2: A- Widening of the interclavicular distance 2B- Deficiency of the superior part of the sternum sparing the distal ¼ of the sternum.

A few causes such as methylcobalamin or riboflavin deficiency, alcohol abuse during pregnancy, and disruption in the HOX-B4 gene have been postulated in murine models [7]. An association with some syndromes have been observed. The acronym “PHACE” has been proposed to describe the association of posterior fossa malformation, hemangiomas, and arterial anomalies, coarctation of the aorta, eye abnormalities, and sternal nonunion [8]. Rare association with other malformations such as Cantrell’s pentalogy, gastroschisis, VACTERL syndrome, Dandy-Walker syndrome, pectus excavatum, and chest wall hamartoma have also been described [8]. We could not precisely identify the cause of this defect in our patient, although the mother may likely have riboflavin deficiency as she did not receive this drug during the first trimester of pregnancy. No syndrome complex was observed in the patient apart from the isolated ASD identified during echocardiography. Torre et al. [9] also reported a frequent association between sternal cleft and skin tags. However, the skin tag was not seen in the index patient.

Even though the condition is frequently diagnosed at birth, patients may present with this condition even in adolescence. This defect is usually asymptomatic and tends to have a predilection for the female gender. The absence of a skeleton in the front part of the chest wall gives rise to a severely paradoxical movement of this part of the thorax. Moreover, the pulsations of the heart and large vessels are visible because they are covered only by soft tissues [10]. The index patient was a female who was asymptomatic at birth apart from the presence of chest defect and had a visible bulge and pulsation of the heart especially while crying (Figure 1).

The condition can be diagnosed prenatally or at birth. At birth, diagnosis is largely clinical. Imaging modalities help in confirming the defects’ location, types, sizes, and other associated disorders. Computed tomography is the modality of choice to evaluate the anatomic detail of the sternum [11]. However, in resource-challenged environments or in situations where caregivers are low-income earners, this may not be obtainable. Hence, a chest radiograph will be necessary. A widened interclavicular distance on chest radiograph with other clinical findings on examination confirms the diagnosis. Echocardiography is needed to identify the intracardiac defects and shunts [12]. In the index patient, due to cost and limited availability of CT scan machines, a chest x-ray was used to confirm the absence of the superior part of the sternum. Echocardiography was further requested to identify any underlying cardiac anomaly which revealed an isolated atrial septal defect, a rare association that has also been reported by few researchers [9,12].

The absence of a sternum introduces multiple risks to the patient, including mediastinal injury, hypothermia, insen­sible fluid losses, respiratory and hemodynamic sequelae [9]. The indications for surgery are to prevent these complications, allow optimal growth of the chest, and cosmesis [13]. The consensus about the timing of sternal cleft repair is in the neonatal period as the flexibility of the thorax is maximum at this age leading to minimal compression of the underlying structures [10]. Primary closure is the preferred modality in infants under 3 months. After 3 months, sliding or rotating chondrotomies, autologous grafts such as costal cartilages, parietal skull, tibial periosteum, ribs and the use of prosthetic materials such as marlex, acrylic, silicone elastomer, Teflon and stainless steel mesh were described [14].

A sternal cleft is a rare congenital anomaly. Although usually asymptomatic, surgery is indicated to improve respiratory dynamics and protect the mediastinal structures from direct injuries, to allow a normal life as well as for cosmesis. Treatment in the neonatal period is most favorable, though other modalities are available in the later stages of life, it can be challenging. Adequate follow-up is necessary as these patients can develop chest wall deformities such as pectus excavatum. Counseling of affected families on possible environmental/social causes to prevent recurrence in other siblings is advocated.

DC and SA wrote the case summary, DC and OB did the literature review. All authors managed the case, read, and approved the final manuscript.

We thank the parents for their understanding and kind permission to take the patient’s pictures and de-identify them for use in this publication.