Hearing loss (HL) is observed among pathologies in patients affected by Myhre syndrome and it is predominantly conductive and sometime sensorineural or mixed. Hearing loss if not treated properly can have impacts on cognitive behavioural and communicative language. We describe the benefits of hearing rehabilitation by using hearing aids in a patient with conductive HL, that carries a mutation (c.1498A>G; p.lle500Val) within the SMAD4 gene as detected by whole exome sequencing [1]. Despite the relevant delay of hearing aid and language rehabilitation in this baby girl because of the COVID-19 pandemic restrictions, we demonstrate the positive impact of the hearing rehabilitation on listening skills, on cognitive abilities and working memory in syndromic HL which is characterized by behavioural disorders and mild to moderate intellectual disability, thus improving quality of life.

Myhre syndrome (MS) is a rare genetic autosomal dominant connective tissue disorder, first observed in 1981 [2], has thus far been reported in about 80 patients worldwide [1]. It is characterized by developmental delay, characteristic facial features, various bone and joint abnormalities, distinctive cardiovascular, ophthalmological and ear, nose and throat manifestations including deafness, in association with mild to moderate intellectual disability and autism or autism spectrum disorder-like behaviour [1,3-5]. Although MS is a rare syndrome, in almost all cases reported an intellectual deficit of varying degrees which may be life-threatening, while limited intellect and autism spectrum disorder-like behaviour may affect the capability of having normal social interactions [1,6]. Behaviour was reported as abnormal with difficult social interaction, attention deficit, repetitive/stereotypic activities and depressive traits [1,6]. Hearing loss is observed in about 80% of subjects affected by MS [7] and it is predominantly conductive even if cases of sensorineural or mixed HL have been observed. Of note, most infants pass the universal newborn hearing screening. The HL loss usually becomes evident in early childhood and is typically present in adults, its underlying aetiology is often unclear or unknown; often patients have a history of bilateral myringotomy tube placement. The diagnosis of MS is established corroborating the clinical findings with SMAD4 heterozygous mutation identified in most of the patients. SMAD4 gene mutations result in abnormal TGF-β signalling in several cell types, which affects the development of several body systems and leads to the specific phenotype of MS [1]. Considering the gain-of-function mutations responsible for MS and the consequent proliferative response seen in tissues, it has been suggested that HL depends by the abnormalities of the cartilaginous and bony structures of the ossicular chain and bony labyrinth even otospongiotic abnormalities [6]. We underly the importance to hearing aids rehabilitation in counteracting the cognitive developmental impairment that is a phenotype character of MS and improving quality of life. 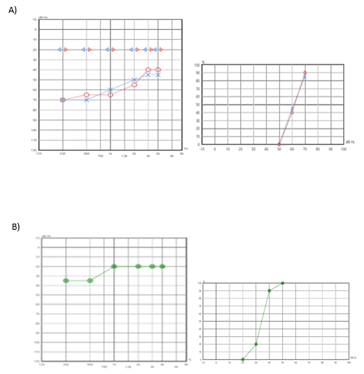 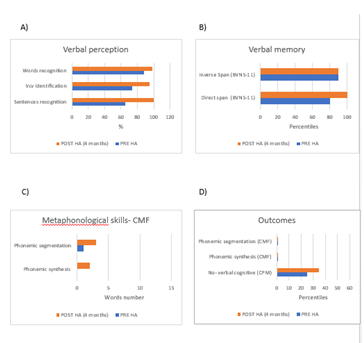 We described a rare case of MS caused of de novo variant in heterozygous missense mutation MAD4, c.1498A>G, p. (Ile500Val) of SMAD4 gene. Although the rarity of syndromic disease, typical clinical picture of SM was observed in our case including developmental delay with mild intellectual disability, characteristic short stature, facial and ophthalmological dysmorphisms, cardiovascular malformations and deafness [1,3-5]. However, in this case we describe the impact of delated diagnosis and treatment of HL mainly due to the poor consideration of Clinicians of this impairment among different clinical manifestations of disease and secondly for the difficulty in accessing the multiple facilities required for diagnosis the rehabilitative process during COID-19 pandemic. Despite the advancement in understanding genetic causes, there is still limited consensus on management of paediatric syndromic patients with HL. In this case, the genetic diagnosis was appropriately done in infant, however the moderate conductive hearing loss was untreated for 4 years and speech therapy was unsuitably performed in child who did not adequately undergo to hearing aid rehabilitation. Likely, the family was not enough informed and denied the cure of their baby girl. The attitude of parents with syndromic children could be to reject the possibility of genetic stigma. Indeed, major goals in the management of paediatric patients with HL are timely and proper diagnosis and determining appropriate aural rehabilitation and familiar counselling (Belcher et al., frontiers pediatric 2021). Thus, the aim is to optimize communication and language development in these children especially in cases with associated multisensory, developmental, and cognitive comorbidities. Prompt and adequate hearing rehabilitation is crucial especially in these children. Deaf children with conventional hearing aids can benefit of speech therapy in improving language skill and cognitive development (landolfi et al., 2022). Thus, the delay in hearing aid prescription is a key point for the rehabilitation of a SM child who is affected by intellectual disability and behavioural dysfunctions. In agreement with the few cases associated with progressive HL [6], we found a typically conductive HL likely related to the otospongiotic abnormalities even if the CT scan did not showed morphological abnormalities. Interestingly, despite the late hearing aid fitting the baby girl showed an early improvement of speech and language skills which can positively affect cognitive development and social interaction. The early effect on the outcome of rehabilitation, even in this case of SM associate a variable cognitive defects, suggests more attention in the management of mild to moderate HL in these patients who must to be insert in a long term surveillance program for risk of late onset or progression to severe and profound HL reaching the indication to cochlear implant [6]. Finally, this case highlights the risk of delay the diagnosis and treatment of severe syndromic patients because of the COVID-19 pandemic consequences including ‘‘social distancing,’’ prolonged lockdowns, cancelling elective procedures, and limiting nonessential services. Given critical period for language development and the long-term impact of auditory deprivation, especially in syndromic children, audiologic and speech disorders Services should be considered essential. In conclusion, we describe a case of SM with a typical presentation in which HL rehabilitation was severely delayed demonstrating the positive impact of hearing aids on acoustic and perceptive skills and, also, on all cognitive and communicative performances (verbal and non-verbal), with beneficial outcomes even in the early stages of the hearing aids wearing [8-13].