Percutaneous coronary interventions (PCI) of right coronary artery (RCA) aorto-ostial lesions are well-known to be associated with high restenosis rates. Positioning of the stent to include ostial coverage and allow for adequate dilation while avoiding protrusion into the aorta that could prevent future engagement of the vessel can be difficult. The Flash Ostial System is a post-dilation balloon system that enables the operator to precisely position the dilation balloon at the aorto-ostium and prevent distal migration of the balloon during inflation for optimal post-dilation. We present a case series describing use of the system.

Percutaneous coronary interventions (PCI) of right coronary artery (RCA) aorto-ostial lesions are well-known to be associated with high restenosis rates because of excessive elastic recoil after dilation.  Much of the recoil is due to the highly elastic composition and non-tubular anatomy of the ostium.  Therefore, an important strategy for treating this lesion is to prevent the recoil with appropriate dilation of the ostium [1].  At least mild protrusion (1-3 mm) of the ostial stent into the aorta is required in order to ensure ostial coverage, making the sizing, positioning and flaring of the stent in the ostium of the RCA extremely important. However, the protrusion of a stent from the ostial RCA into the aorta may lead to considerable diagnostic and interventional challenges, including difficulty in subsequent imaging of the RCA or during re-interventions due to inability to obtain guiding catheter support or pass the guidewire through the stent’s central lumen.  Hence, some operators will flare the ostial portion of the stent to allow easy repeat catheter access to the treated vessel.  However, given the anatomy of the ostium, geographic miss is common, reported in up to 54% of cases, and results in a three-fold increase in restenosis and re-interventions [2].

In order to address this issue, the Flash Ostial System was developed as a post-dilation balloon system that conforms to the ostium during stent post-dilatation and angioplasty.  The system is a 0.014” (0.36mm) guidewire-compatible, rapid exchange angioplasty balloon catheter with a dual balloon design featuring an anchoring balloon that enables the operator to precisely position the catheter at the aorto-ostium and prevents distal migration of the balloon during angioplasty. The dual balloon catheter is comprised of an outer compliant anchoring (proximal) balloon oriented coaxially over an inner semi-compliant angioplasty (distal) balloon. The anchoring balloon has a larger diameter spherical shape in the proximal segment. The inflation lumens for the inner and outer balloons are connected to a hub with two female lure connectors, as shown in Figure 1.  The balloons are 145cm in length and the distal angioplasty balloon is 8mm in length and comes in 4.0mm X 12mm, 4.0mm X 17mm, and 5.0mm X 17mm semi-compliant balloon diameter sizes, all 6 French guide and 0.014” wire compatible.  The proximal anchoring balloon on all sizes is a 14mm compliant balloon.

The Flash Ostial System is contraindicated for use in unprotected left main angioplasty or Coronary artery spasm in the absence of a significant stenosis.

The procedure for using the Flash Ostial System can be seen in Figure 2.  First, the system is brought into the deployed stent at the ostium, with the middle marker band lined up with the true ostium of the vessel. The distal marker should be proximal to the distal edge of the stent, with the proximal marker outside the guide in the aorta. Then, the distal semi-compliant balloon (which lies between the distal and middle markers) is inflated with an indeflator to recommended pressure.  Then, the compliant, anchor balloon (which lies between the proximal and middle markers) is inflated with the 1cc syringe (filled with 100% contrast) provided with the system. After adequate dilation, the balloons are deflated and the system is removed. 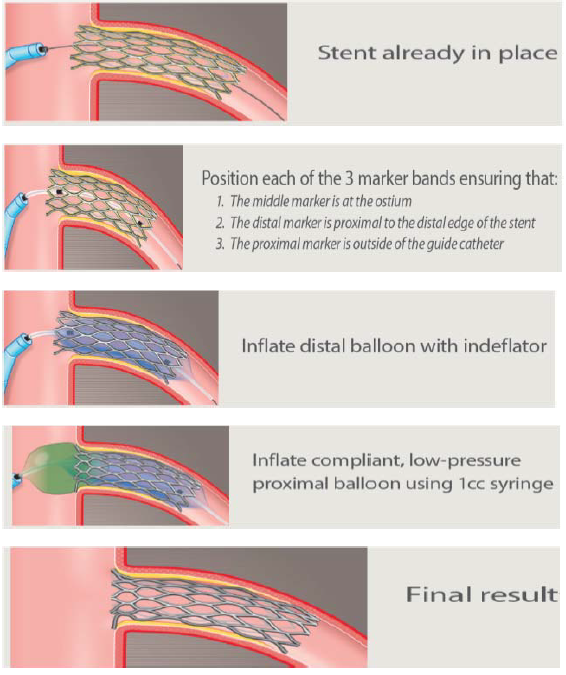 At the University of Washington, we have begun using the Flash Ostial System on a routine basis for PCI involving the ostium of the RCA.  We have a database of 25 cases over the past four months, three of which will be presented here.

The patient is a 69 year-old male with Canadian Cardiovascular society (CCS) class III angina despite optimal medical therapy (beta-blockers and long-acting nitrates) and a positive nuclear stress test in the inferior distribution. He was referred for PCI of his known right coronary artery (RCA) chronic total occlusion (CTO). We decided on an anterograde approach due to the lesion being a short-segment CTO with an unambiguous proximal cap due to in-stent restenosis. We were able to cross the lesion using a Pilot 200 wire and microcatheter. We then performed laser atherectomy of the CTO segment with a 0.9mm laser catheter. The laser catheter was then removed and a 3.5 X15mm cutting balloon was taken into the lesion for further pre-dilation. The balloon was removed and a 3.5 X28mm drug-eluting stent (DES) was inflated in the lesion and inflated to 14 atm. A 4.0mm X 8mm ostial flash balloon was taken into the stent and used for post-dilation. Post-PCI angiography showed Thrombolysis in Myocardial Infarction (TIMI) 3 flow down the RCA, excellent stent expansion with evidence of the ostial stent flash-created metal rim around the aorto-ostium (yellow arrow), and no evidence of complications. 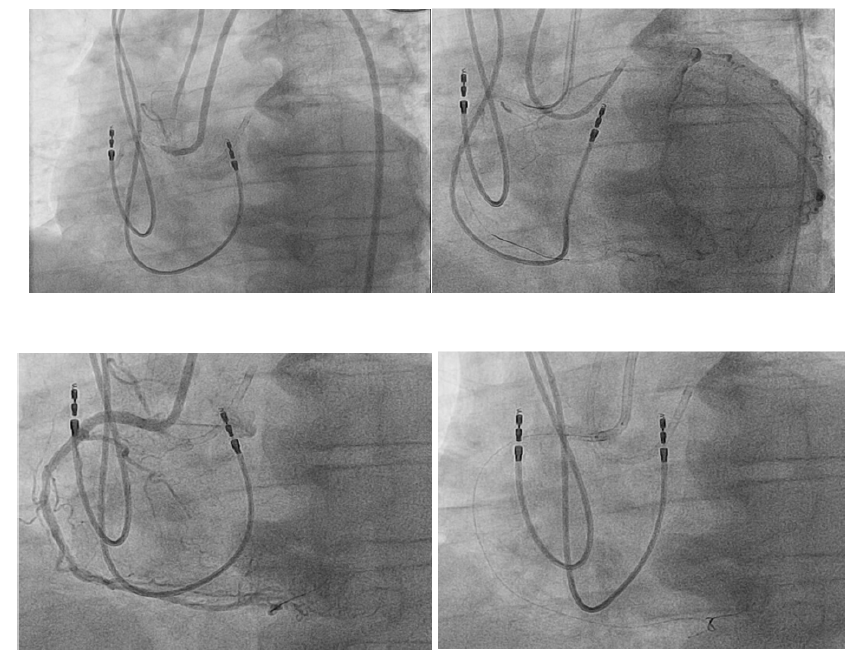 71 year-old male with CCS class III angina despite optimal medical therapy (beta-blocker and long-acting nitrates) who underwent a stress myocardial perfusion scan that showed a large area of reversible ischemia in the inferior and lateral segments. He subsequently underwent angiography that showed significant three vessel obstructive coronary artery disease (80% mid-LAD, CTOs of the RCA and left circumflex [LCX] coronary arteries). Viability imaging after his angiogram showed that the inferior and lateral segments were viable. The patient was not a candidate for coronary artery bypass surgery and was referred for PCI of his RCA and LCX CTOs.

The LCX CTO was crossed using anterograde wire escalation, followed by laser atherectomy, and finally stenting of the LCX into the obtuse marginal branch with an excellent angiographic result. The RCA CTO was short but had an ambiguous cap, so we decided to begin with a retrograde approach. We took a Corsair and Fielder FC down septal collaterals and into the RCA. We were then able to take this to the proximal cap and externalize the FC wire into the aorta. We then switched out the FC for a RG3 wire and externalized it through the anterograde JR4 guide using a 7 French snare. We then performed laser atherectomy of the lesion, followed by pre-dilation and PCI of the CTO segment, including a 3.0 X38mm DES that we deployed 2-3mm outside of the ostium of the RCA.  We then brought in a 3.5mm X 8mm flash ostial system and performed post-dilation with an excellent angiographic result with evidence of the ostial stent flash-created metal rim around the aorto-ostium (yellow arrow).

73 year-old female with a history of coronary artery bypass graft (CABG) surgery (left internal mammary artery graft [LIMA] àLAD and saphenous vein graft [SVG] àRCA) and CCS class III angina despite optimal medical therapy (beta-blocker and long-acting nitrate).  She had a recent positive nuclear perfusion stress test showing inducible peri-infarct ischemia in the inferior and infero-lateral walls. She had subsequently had a PCI of her SVGàRCA graft but a recurrence of symptoms prompted repeat angiography, revealing re-occlusion of the graft. She was then referred for PCI of her RCA CTO.

Initially, we tried a retrograde approach through the SVGà RCA graft due to the ambiguous nature of the proximal CTO cap.  We were able to traversed the graft and into the distal RCA using a microcatheter and Pilot 200 wire. However, despite wire escalation, we were unable to penetrate the distal cap, mostly due to the acute angle from the graft into the distal RCA that prevented the microcatheter from advancing into the vessel. We then switched to a retrograde approach through the septal collaterals, which we were able to traverse using a Sion wire and microcatheter. We then brought in an anterograde guideliner and were able to perform reverse controlled antegrade and retrograde subintimal tracking (CART), externalizing a RG3 wire. We then performed pre-dilation of the CTO segment, followed by PCI of the segment, including a 3.5 X38mm DES inflated to max 12 atm into the ostium of the RCA, with 2-3mm of the stent hanging into the aorta. We had trouble engaging the RCA with our 8 French AL1 guide for post-dilation of the stents after stent expansion (red arrow). We were able to deliver a 4.0 X8mm Flash Ostial System to perform post-dilation, which then allowed us to seat our guide catheter in the ostium of the RCA.  Post-PCI angiography showed with excellent angiographic result.  This case illustrates how using the Flash Ostial System improves the ability to re-engage the coronary post-ostial PCI. 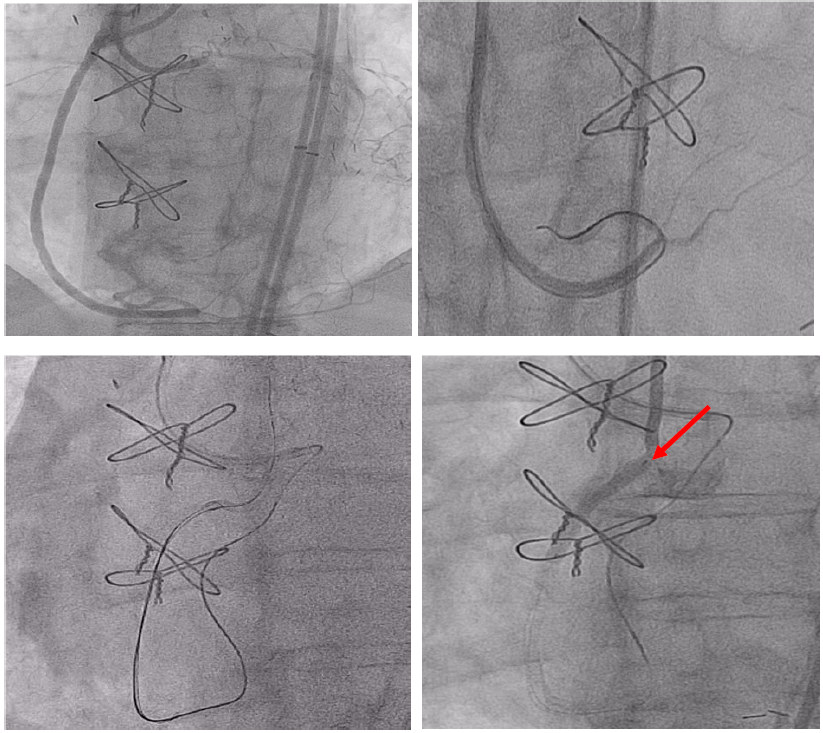 Figure 5a: Solving the Dilemma of Ostial Stenting in 73 years old man 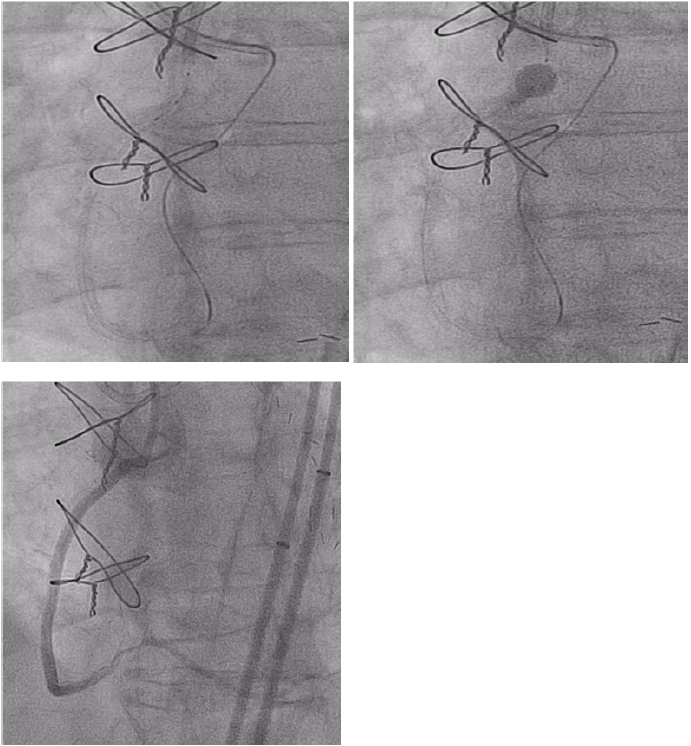 Figure 5b: Solving the Dilemma of Ostial Stenting in 73 years old man