A Simple and Effective Method to Treat Perigraft Seroma: A Case Report

Background: Perigraft seroma following creation of arteriovenous graft is uncommon but relatively difficult to solve. Progression of seroma not even will cause problem in graft puncture but sometimes will eventually result in failure of graft function or even infection. There are many different methods for the treatment of seroma, including serial aspiration, incision and drainage or graft replacement. Most of these methods are complicated and sometimes, the results are uncertain.

Case Report: We report a case of perigraft seroma found over left forearm arteriovenous loop graft. It has been observed for over one month and no resolution is noted. We used the outer fibrous pseudocapsule to wrap around the weeping graft to create a high pressure container to prevent further active transudation of serum-like fluid.

Conclusions: This case show the feasibility of using pseudocapsule to fully cover the graft to prevent progression of seroma. The result is good and less recurrence rate is noted. This technique is considered a simple, effective solution to treat perigraft seroma and finally preserve the function of graft for dialysis.

Seroma is a complication related to prosthetic arteriovenous graft (AVG), appearing as ball-like formation by transudation of sterile and clear serum [1]. It is confined by a non-secretory fibrous pseudocapsule. The incidence of 2~4% reported in literature may be underestimated due to some spontaneous resolution of seroma [2]. A seroma is typically located to the arterial anastomosis and usually occurs within the first month after AVG creation [3]. Until now, there are still many different methods for the treatment of seroma but only few of them are relative simple and effective solutions. Furthermore, recurrence of seroma is still common and this will require repeated intervention, in which can possibly lead to secondary infection and access loss. Herein we describe one case of perigraft seroma successfully treated by using pseudocapsule to wrap over the weeping graft to stop further secretion of ultrafiltered serum.

This patient was a 70-year-old man with end-stage renal disease on regular dialysis. A left forearm brachial artery to basilic vein 6-mm loop polytetrafluoroethylene (PTFE) vascular graft (Gore-Tex, W.L., Gore & Associates, Flagstaff, AZ) had been implanted for vascular access because of poor quality of distal cephalic vein. A perigraft seroma gradually developed around the arterial anastomosis after operation. A ball-like formation was noted over his left elbow over the surgical incision (Figure 1A). Due to progressive enlargement of the seroma and the patient started to complaint of wound tenderness, we decided to perform the surgery to remove the seroma. The previous wound incision was entered and the fibrous pseudocapsule was carefully dissected from surrounding tissue. After the ball-like seroma was fully exposed, the pseudocapsule was incised and the fluid was drained and the weeping graft was exposed (Figure 1B), in which transudation of serum-like fluid coming from. Pseudocapsule was carefully dissected from surrounding tissue and we partially resected the pseudocapsule, except those adherences to the transuding segment of the prosthesis on the arterial side (Figure 2). The pseudocapsule was left large enough over both sides of the graft to cover the whole segment of weeping AVG. A 5-0 polypropylene (Prolene; Ethicon, INC., Somerville, NJ, USA) was used to wrap over the pseudocapsule in continuous running, double layer method (Figure 3). After it was closed, the suture was carefully inspected for few minutes to observe for any further discharge from underlying weeping graft and see whether any extra suture needed to stop the leakage (Figure 4). After complete hemostasis, the skin was properly trimmed, and the wound was closed with no drainage tube left in the wound. The patient immediately resumed hemodialysis using this dialysis access after surgery. We have followed up the patient for over 3 months without any evidence of recurrence of the seroma.

Figure 1: (A)  Perigraft seroma was found after creation of left forearm AV loop graft in one month later; (B) After fluid drainage and cyst removal, the weeping graft was exposed, in which transudation of serum-like fluid coming from. 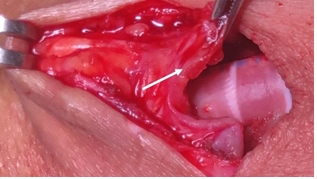 Figure 2: Pseudocapsule (arrow), in which formed by fibrous tissue, was carefully dissected from surrounding tissue and trimmed to certain size to cover the weeping graft. 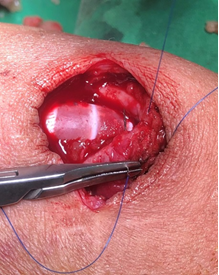 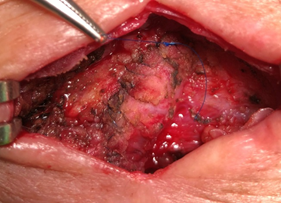 Figure 4: After closing the pseudocapsule over the whole weeping graft segment, it was observed for any further leakage of fluid. Any necessary extra suture is needed to totally close the gap.

PTFE Prostheses are widely used for vascular access for hemodialysis in patients with no suitable superficial vein. Despite its rare incidence, some seromas are clinically troublesome and sometimes will eventually cause graft infection or even loss of access. The etiology of seromas is uncertain. Several predisposing factors such as heparin use, glucocorticoid use, extensive dissection during the procedure, and excessive handling causing graft injury have been suggested for possible mechanisms.

Drainage of the seroma content with or without removal of the pseudocapsule has been the most common surgical technique adopted by surgeons [4]. However, recurrence of seroma is high using this method due to the remaining segment of the transudating prosthesis. Other surgical techniques, including application of microfibillar collagen or a fibrin sealing, have been found in some case reports [5]. To remove the weeping graft, some authors suggested replacement of the graft with saphenous vein graft [6], homograft iliac artery [7] or a new PTFE graft. Besides, other authors also recommended dialysis graft artery inlet revision with pseudocapsule removal as an effective method to completely remove the transudation segment of the proximal prosthesis [8]. However, the methods mentioned above usually involved complicated procedure and temporary loss of AVG function due to surgery is very common.

In the present report, we describe a relative simple and easy procedure to deal with perigraft seroma of dialysis graft. All patients with seroma will be asked for this procedure only after at least one month after the presentation of perigraft seroma since we believe the pseudocapsule will be tough enough to wrap around the transudating prosthesis and become a strong barrier to create a high pressure container to stop further transudation. It is important to dissect enough pseudocapsule from the surrounding tissue and trimmed it into proper shape to fully cover the weeping graft. Using continuous running, two-layers suture is crucial to prevent any further leakage, in which recurrence of seroma will be expected if the suture is not secure enough. In addition, postoperative compression of the seroma sac is also required to further stop transudation and enhance the healing process of the wound.

Using the pseudocapsule to become an effective barrier to stop progression of seroma is relatively simple and reproductive procedure. The dialysis function of AVG is preserved since it is only necessary to enter the original wound incision and reduce the ball-like shape of the seroma. It is straightforward to resect most of the pseudocapsule and preserve adequate fibrous tissue to cover the weeping graft to prevent further seroma formation. We recommend this simple method since it is a reproductive and effective way to treat the perigraft seroma and eventually keep AVG functioning well.