Findings were consistent with bone marrow metastasis of prostate adenocarcinoma. Other haematological malignancies and tumoral markers were normal. Later, the patient was consulted to urology and after initial evaluations, 12 core needle transrectal ultrasound guided prostate biopsy was performed. Pathology report revealed a prostate adenocancer with Gleason score 4+3 in six cores positive of twelve fragments. Tumour rate was between 50%-100% in positive cores. Bone scintigraphy was performed for clinical staging and it was compatible with extensive bone metastasis (Figure 2). These results were discussed in urology-oncology council and patient was conducted chemotherapy and radiotherapy. Medical oncology began a docetaxel chemotherapy regimen with maximum androgen blockade (MAB) and denosumab for bone lesions. Radiation oncology also began radiation therapy for bone lesions. Patients current PSA and haemoglobin were 0.04 ng/ml and 10.1 g/dl, respectively. The patient is still on oncological follow-up. Written informed consent was obtained from the patient for their anonymized information to be published in this article. 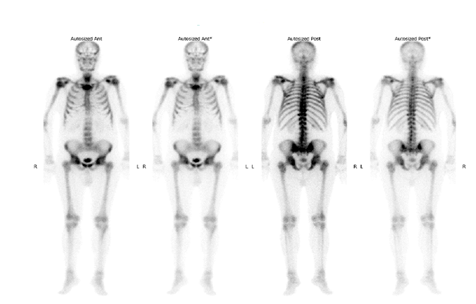 Figure 2: Findings compatible with extensive bone metastasis, The lesion in the manubrium sterni was observed in a lytic-sclerotic manner leading to cortical irregularity.

Bone involvement by solid tumours can be diagnosed on CT, MRI or bone scan. It is very rare to detect non-hematologic malignancy while examining the bone marrow biopsy. Detection of bone marrow metastatic deposits is important to determine the stage of the malignancy, chemotherapeutic response, prognosis and follow up [5]. Hypercalcemia, bone pain, raised the level of ALP and LDH, unexplained cytopenias and lytic or sclerotic bony lesions on radiology suggest bone marrow metastasis.

Declining use of the PSA test has been associated with an increased incidence of metastatic prostate cancer. Prostate cancer is a slowly developing malignancy but untreated cases can present symptoms of advanced disease such as bone pain, spinal cord compression, fatigue, depression, obstruction, weight loss, constipation and anaemia. We must systematically evaluate patients and keep in mind possibilities malignancy. We should be convincing, informative against patients. It should not be forgotten that prostate cancer is diagnosed at an early stage 5-years relative survival rate for local stage is almost 100% and for distant stage is 28%.

The Author(s) declare(s) that there is no conflict of interest.

Written informed consent was obtained from the patient(s) for their anonymized information to be published in this article.

Our institution does not require ethical approval for reporting individual cases or case series.

The authors would like to thank the anonymous reviewers for their comments on an earlier version of the manuscript, which have led to significant changes to the final manuscript.