Introduction: Nephrotic syndrome (NS) is the commonest glomerular disorder in childhood. Cyclosporine-A (CsA) has been used widely for children around puberty with moderate to severe steroid dependency. As long term CsA is potentially nephrotoxic, continuing CsA beyond 5 years is not recommended. This retrospective study was conducted to evaluate the outcome of different strategies when withdrawing CsA in patients after 5 years of therapy.

Method: The study was carried out in a tertiary care facility which conducts 2 dedicated outpatient clinics for children with NS where CsA was used since 2003. Patients who have completed 5 years of therapy between 2007 to 2017 were considered for analysis. Patients who had a stable disease activity after commencing CsA, the drug was withdrawn and was kept under surveillance with no further treatment. The patients who had more severe disease were commenced on either levamisole (LV) or mycophenolatemofetil (MMF). The number of patients who relapsed within one year after withdrawal of CsA was compared.

Conclusion: This retrospective study demonstrates a clear benefit of administering either LV or MMF when withdrawing long term CsA therapy in patients with NS.

Nephrotic syndrome (NS) refers to the tetrad of heavy proteinuria, oedema, hypoalbuminaemia and hyperlipidaemia. While NS is usually classified as secondary, congenital or idiopathic; the most common paediatric type is idiopathic NS [1, 2]. Disease mechanism of idiopathic NS is largely unknown, but there is evidence to suggest that it could be a primary T-cell disorder leading to podocyte dysfunction [3]. Idiopathic NS is initially treated empirically with corticosteroids. Steroid-responsiveness is regarded to have greater prognostic value than renal histology [4]. Depending on the response to initial steroids, second-line agents such as Cyclosporine A A (CsA), Levamisole (LV), MycophenolateMofetil (MMF) or alkylating agents may be started [2]. Approximately 80-90% of children with idiopathic NS will achieve remission with steroid therapy, and they are said to have steroid-sensitive NS (SSNS) [2]. However, around 50% of children with SSNS develop frequently relapsing NS (FRNS) or steroid-dependent NS (SDNS) [2]. FRNS and SDNS are usually treated with other immunosuppressive agents, but 10-20% of children receiving these agents may still continue to have frequent relapses or steroid dependence during or after treatment [2, 3].

Most common histological findings in childhood idiopathic NS are classified under minimal-change disease (MCD) and focal segmental glomerulosclerosis (FSGS) [2]. Of these, MCD is the most common form of idiopathic NS in children, showing a good response to steroids, and is characterized by minimal immunologically mediated damage to the glomerulus with podocyte foot alterations evidenced by electron microscopy [4]. Characterized by focal glomerular damage with secondary sclerosis and Bowman's capsule adhesions, FSGS is found particularly in steroid-dependent or steroid-resistant forms. These two forms of idiopathic NS are thought to be two different severity grades of the same immunological disease spectrum [4].

CsA is a lipophilic cyclic polypeptide which acts as a powerful T cell suppressor [5]. It causes reversible inhibition of transcription of interleukin-2 and other cytokines, in T helper lymphocytes reducing the activation and maturation of various cell types, involved in cell-mediated immunity [5]. CsA has numerous side effects but nephrotoxicity due to renal structural changes on long-term administration has been a major concern [6].

MMF, depletes guanosine nucleotides preferentially in T and B lymphocytes inhibiting their proliferation and also reduces the recruitment of lymphocytes and monocytes into sites of inflammation, thereby suppressing cell-mediated immune responses and antibody formation [7]. Adverse effects of MMF are listed as haematological disorders (such as marrow disorders, anaemialeucocytosis, leucopenia, thrombocytopenia), hepatic disorders and seizures [8]. Unlike calcineurin inhibitors like CsA, MMF is not nephrotoxic and does not induce the production of fibrogenic cytokines like TGF-beta. MMF does not markedly increase blood pressure, cholesterol levels or triglyceride levels in the recipients [9, 10]. LV, an anthelmintic, has demonstrated promising results in effectively maintaining remission in SNDS. Despite clinical effectiveness, there is a lack of molecular evidence to explain its mode of action with regard to treatment of NS. It is hypothesized to induce expression of glucocorticoid receptor and to provide protection against podocyte injury [11]. Adverse effects of long-term LV are listed as haematological abnormalities, vasculitis, seizures [12]. Of the 3 drugs, CsA is undoubtedly more efficacious but its long term use is limited by potential nephrotoxicity. Hence, most clinicians will attempt to withdraw the drug after 2-5 years of therapy and it is not uncommon for these patients to relapse following the withdrawal [13, 14]. This study aimed to ascertain the efficacy of commencing either LV or MMF following CsA withdrawal, in preventing relapse of SDNS.

This single center retrospective study was carried out in a nephrology unit of a tertiary care facility where two dedicated clinics were conducted per week for patients with NS. The treatment with CsA was commenced in this unit in 2003 mainly for children around puberty and due to cost constraints and the lack of facilities to routinely measure the plasma CsA levels, the unit policy was to prescribe CsA as a steroid sparing agent usually for two years. However, when the disease was not well controlled it was continued up to 5 years at which point when patients were free of relapses for more than a year then CsA was withdrawn. When the treating clinician decided to withdraw the drug, some patients were commenced on MMF at 750 mg/m2 in 2 divided doses daily if they had demonstrated a more complicated disease course or were commenced on LV at a dose of 2.5 mg/kg on alternate day if they had a relatively less complicated disease course or CsA was withdrawn with no further treatment if they have had a relatively stable disease course during the therapy. All patients/guardians with NS were trained to test and record urine protein excretion on daily basis. Patients receiving immunosuppressive medications were routinely reviewed on monthly basis focusing on recurrence of proteinuria and potential adverse effects of the medications. Information of these patients was entered in a database approved by the Ethics Committee Faculty of Medicine, University of Peradeniya, Sri Lanka. From the data base the patients who had completed 5 years of CsA therapy for SDNS were identified and were considered for the analysis. Patients who had renal histology other than minimal changes and patients with secondary NS were excluded. Among those patients who fulfilled the inclusion criteria three groups of patients were identified: first group who received MMF, second group who received LV and the third group that received no treatment following CsA withdrawal. In each group the number of patients who relapsed within one year of CsA withdrawal was identified. Urine protein excretion of +++ or more for 3 consecutive days was considered as a relapse.

Statistical analysis of the data was done using IBM SPSS Version 24. Clinical demographics were explained using descriptive statistics. Relative risk and Pearson’s chi-square tests were used to compare relapse incidences between the groups. All procedures performed in the study were in accordance with the ethical standards of the Scientific and Ethics Committee, Faculty of Medicine, University of Peradeniya and with the 1964 Helsinki declaration and its later amendments or comparable ethical standards. The informed consent to be included in the data base was obtained from all individual patients and/or parents.

Eighty-one patients who had completed 5 years of CsA therapy with no recurrence of proteinuria during last 12 months were considered for the analysis. The median age of the study population was 16.5 years while the patient age ranged from 12.1 to 17.7 years. The male to female ratio was 1.8:1. Of the 81 patients, 27 who had no further treatment (no treatment group), 31 were treated with LV (LV group), and 23 were treated with MMF (MMF group). There was no significant difference in the age or sex distribution among the 3 groups. As demonstrated in Table 1 and Figure 1, of the patients who received no treatment following CsA withdrawal (No-treatment group), 48.1% relapsed during the period of observation. The percentage of relapses for LV and MMF were 19.4% and 17.4% respectively. LV lowered relapses by 2.48 times compared with the No-treatment group (RR= 2.48, P= 0.020, CI 95%) and MMF displayed a reduction of relapses by 2.77 times in comparison to the No-treatment group (RR=2.77, P= 0.022, CI 95%). The statistical difference between LV and MMF relapse percentages were found to be insignificant (p > 0.05, CI 95%). 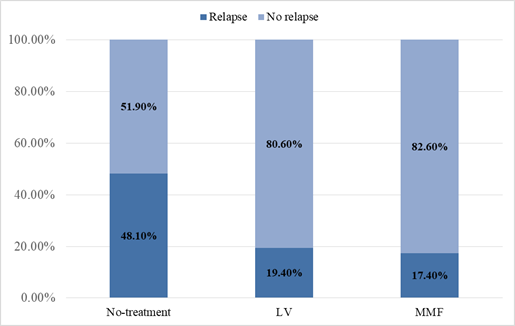 CsA is a highly efficacious drug that is widely used for NS with variable success rates and adverse effects. The success rate for maintaining remission of idiopathic NS is the highest in steroid-dependent patients, where complete remission is achieved in over 75% of cases with minimal change histology [14]. CsA dependency is well known to clinicians as most of these patients tend to relapse when CsA is withdrawn [14]. However, different strategies have been adapted in an attempt to overcome this challenge. Furthermore, success has been reported in a considerable number of cases by prescribing a tapering dose of CsA before the withdrawal or to prescribe a low maintenance dosage sufficient enough to maintain stable remission without the risk of nephrotoxicity [15]. However, evidence of success of switching from CsA to less toxic drugs due to potential nephrotoxicity which could arise with its long term use is lacking in the published literature. LV, which is an immune-modulatory drug have been reported to reduce the relapse rate and the annual cumulative steroid dosage [13]. Similarly, several studies have demonstrated the efficacy of MMF in maintaining remission in SDNS with a low side effect profile [16, 17]. Although switching from CsA to LV alone has not been studied previously, a study in 2001 showed stable remission without severe side-effects in patients who switched to LV from cyclophosphamide and/or CsA [18].

The results of this study clearly indicate that administration of both LV and MMF following CsA withdrawal in SDNS patients significantly reduced the relapses. There was no significant difference in the efficacy between MMF and LV. However, it is worth mentioning that MMF had been prescribed for patients with more severe disease and therefore the actual efficacy of the drug is probably under estimated. Although a retrospective study, the remarkable reduction of disease relapse by MMF and LV highlighted in the present study strengthens the current knowledge on SDNS treatment, and would pave way to develop new immunosuppressive regimens with milder adverse-effects.

In conclusion, this retrospective study demonstrates that LV and MMF significantly reduce the relapses following CsA therapy in SDNS and there is no statistically significant difference between LV and MMF in reducing relapse rates.

Authors declare that there are no conflicts of interest.