Objective: To determine the frequency of microalbuminuria in Type 2 Diabetes Mellitus with good glycemic control.

Diabetes Mellitus (DM) is a chronic illness characterized by hyperglycemia, insulin resistance, or relative insulin deficiency [1]. DM is a worldwide public health problem and puts a substantial burden on health care resources. The prevalence of diabetes for all age-groups worldwide was estimated to be 2.8% in 2000 and 4.4% in 2030. The total number of people with diabetes is projected to rise from 171 million in 2000 to 366 million in 2030. The urban population in developing countries is projected to double between 2000 and 2030 [2]. DM is a significant problem in Pakistan, having a prevalence of ranging from 3-14%, which varies in the Urban and Rural areas [3]. The screening for DM type 2 may either be in the form of a 2-hour oral glucose tolerance test or via HbA1c testing, as per the recommendations of the American Diabetes Association (ADA) [1].

Type 2 DM (formerly known as non-insulin dependent DM) is the most common form of DM, and its prevalence is continuously increasing [4]. People having type 2 DM are more vulnerable to various forms of both short- and long-term complications, which often lead to their premature death. The chronic hyperglycemia of DM type 2 is associated with end-organ damage, dysfunction, and failure, including the retina, kidney, nervous system, heart, and blood vessels [1]. This tendency of increased morbidity and mortality is seen because of its insidious onset and late recognition [4]. Diabetic Nephropathy (DN) is the leading cause of premature deaths in diabetic patients due to renal failure [5]. Older age, male gender, long duration of DM, smoking, obesity, and elevated blood pressure are risk factors. Mortality due to kidney failure in a diabetic patient is 20-40 times more than those without DM. An early sign of impending nephropathy is microalbuminuria (MA). The study shows that the overall prevalence of microalbuminuria was 29.5% [6]. Diabetic patients with poor glycemic control and good glycemic control have the frequency of microalbuminuria of 35.9% and 10%, respectively. A study done in Pakistan shows a prevalence of microalbuminuria 72.72% in patients with type 2 DM [7]. To prevent acute complications and to reduce the risk of long-term complications, to continue medical care, and to educate patients for self-management is needed [4].

Since no such study had been done in Balochistan to assess the frequency of microalbuminuria in DM 2 patients in association with good glycemic control, therefore, it will be a novel study in the area mentioned above.

A cross-sectional study is conducted at the Department of Medicine, Sandeman Provincial hospital Quetta Pakistan. The duration of the study was from 25th Sept 2016 to 25th Mar 2017. A sample size of a total of 140 patients of type 2 DM was selected with a 95% confidence interval. Diabetic patients (Type 2 DM) with good glycemic control, with either gender having age in the range of 30 -50 years, were enrolled in the study. Patients with Urinary Tract Infection, previous cardiac disease, Hypertension, Hematuria, any Urinary tract tumor, or had plasma creatinine of >1.2 mg/dl were excluded from the study.

A total of 140 patients fulfilling selection criteria was included by their consent in the study. Venous blood was collected after 12 hours of fasting in a test tube with ethylene diamine tetraacetic acid (EDTA) anticoagulant for HbA1c. 24-hour urine was collected for the estimation of MA. HbA1c is estimated by boronate affinity chromatography via High-Performance Liquid Chromatography (HPLC), which separately totals glycated hemoglobin by binding to solid-phase dehydroxylation using Nycocard immunoassay kit (USA). After the exclusion of infection and hematuria, urine samples were examined for microalbuminuria. Urinary albumin was measured with an autoanalyzer (analyzer medical system, Italy) using Randox kits (urinary albumin measured with the immunoturbidimetry method, United Kingdom). A second 24-hour urine sample was obtained and examined for microalbuminuria if the first measurement exceeded 30 mg of albumin. The diagnosis of microalbuminuria was confirmed when >30 mg/dl albumin was found in the second sample. 24-hours urinary albumin concentration of <30 mg were considered as normal (Normoalbuminuria), 30-300 mg as microalbuminuria and > 300 mg as microalbuminuria (Overt proteinuria).

A total of 140 patients having Type 2 DM were included in the study. Mean, and the standard deviation was computed for quantitative variables like age, duration of type II DM, HbA1c level. Frequency and percentages were calculated for qualitative variables like gender, microalbuminuria. Effect modifier like age, gender, and duration of DM was controlled through stratifications. Post-stratification Chi-square test was applied to see the effect of these on outcomes (i.e., microalbuminuria) by taking P-Value ≤0.05 was considered significant. 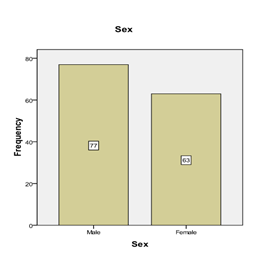 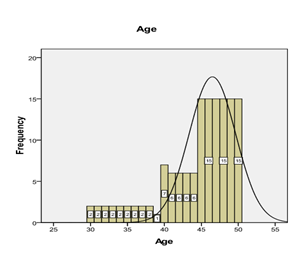 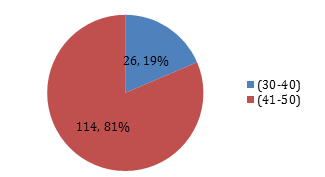 Graph 3: Percentage of patients according to age groups. 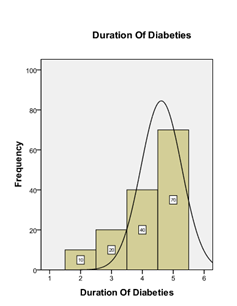 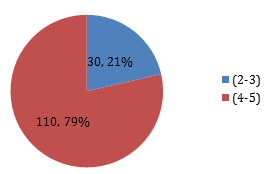 Graph 5: Percentage of patients according to the duration of Diabetes groups. 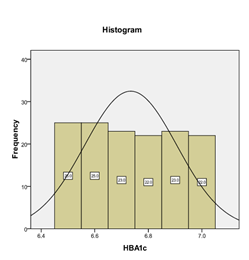 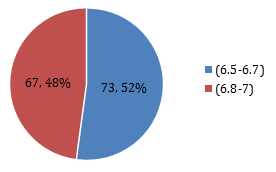 Graph 7: Percentage of patients according to HBA1c.

Table 2: Descriptive statistics of the duration of DM (years) (n=140).

Chi-Square test was applied. P-value ≤ 0.05 is considered as significant, therefore the results were statistically significant.

A Chi-Square test was applied. For statistically significant, the P-value ≤ 0.05, therefore, the results of this table were not significant.

Chi-Square test was run on the above table. The results are not statistically significant since the P-value is not ≤ 0.05.

A Chi-Square test was run, and the results were not statistically significant as the P-value is not ≤ 0.05.

A Chi-Square test was applied where the results were statistically significant in the above table.

A Chi-Square test was applied. The results were not statistically significant as P –value was not ≤ 0.05.

Table 11: Microalbuminuria according to gender (n=140).

A Chi-Square test was applied. But the results turn out to be statistically significant as the P-value was ≤ 0.05.

Table 12: Microalbuminuria according to the duration of DM. (n=140).

A Chi-Square test was applied. The results were statistically significant as the P-value was ≤ 0.05.

DM is a global health problem. The majority of patients are in the young or middle age group [2]. The prevalence of DM is high in Pakistan, ranging from 3-14%, which varies in the Urban and Rural areas and is a major health problem in Pakistan [8]. Microalbuminuria, which is an early marker of diabetic nephropathy, may be present at diagnosis of type 2 DM. It progresses to overt nephropathy and eventually leads to a decline in glomerular filtration rate and, ultimately, to end-stage renal disease or premature cardiovascular mortality [9]. The frequency of microalbuminuria in our study in type 2 DM with good glycemic control was 15% as compared to the frequency of Microalbuminuria in Khan et al. study was 29.5% [7]. Similar results have also been shown by other studies with slight variations in the frequency of microalbuminuria ranging from 24-34% [10]. This slight variation in the frequency may be due to different factors like the variation in the definition of DM, stage of the disease, method of assessment, and ethnic susceptibility to develop nephropathy. Another finding in Khan et al., the study was that females were major sufferers with 23 cases while males were 13 [7]. Female dominance has also been noted by other studies. A high frequency of DM was found in patients between 40–50 years of age. Similar results were also reported by another study.

According to Yokoyama et al., the nation-wide large-population study revealed that the prevalence of microalbuminuria in Japanese type 2 diabetic patients was 32% [11]. The DEMAND (Developing Education on Microalbuminuria for Awareness of Renal and Cardiovascular Risk in DM) study stated that the overall global prevalence of microalbuminuria among 24, 151 patients with type 2 DM was 39% [12] and the Microalbuminuria Prevalence (MAP) study reported the prevalence at 40% among 5, 549 Asian patients [13]. These findings indicate that microalbuminuria is common. The study of Yokoyama et al. is the second-largest study in terms of the number of subjects investigated and achieved high data availability, with 60% of multiple quantitative measurements for United Arab Emirates (UAE), while other large-population studies performed single measurements by dipstick with 20–40% of data-missing rates for A1C and blood pressure levels [11-13].

The team acknowledges the assistance of the hospital's administration.

All authors contributed to designing the project, Data collection, and interpretation, literature review, and gave the final evaluation.