Objective: The objective of this study was to report our experience of the management of penile fracture at the Zinder National Hospital (NIGER). Patients and methods: This is a retrospective, descriptive study of 13 cases of penile fracture treated in the urology department of Zinder National Hospital between February 2014 and June 2021. The parameters studied were patient age, circumstances of occurrence, marital status, clinical signs, treatment, and outcome. Results: The average age of our patients was 33 years old with extremes of 19 years and 51 years, there were 12 married patients, 3 of whom were on their wedding night, and 1 was single. The circumstances of occurrence were coitus for all patients. The interrogation found the use of erectogenic drugs by the 12 married patients. The classic coitus misstep was found in 9 cases, the other 4 admitting that it was the woman above who ended up crushing the penis. All patients heard a crunch followed by sudden collapse of the erection, and pain before seeing penis deformity. The average time elapsed before management was 7 hours with extremes of 12 and 46 hours. Surgical treatment was suture of the tunica albuginea of the corpus cavernosum through a coronal incision 11 cases and an elective incision in 2 cases. The mean follow-up was 18 months (range 4-24 months) before being completely lost of view. Three complications were recorded including a curvature, an albuginea nodule interfering with sexual intercourse, and one case of erectile pain.

Penile fracture is a rare urological emergency [1- 3]. It is defined as a rupture of the tunica albuginea of the corpus cavernosum occurring on an erect penis [1, 4, 5]. The mechanism is a hyper-curvature of the erect penis, following a misstep of coitus, manipulation, or rolling over in bed [1-3]. The associated lesion can be a concomitant urethral injury. The diagnosis is essentially clinical, based on the context of occurrence, the clinical examination signs [1-3] and then confirmed by surgical exploration. It is an urological emergency requiring adequate care to prevent serious sexual complications. The objective of this work was to report our experience of the management of penis fracture at the National hospital of Zinder in Niger republic.

This is a retrospective, descriptive study of 13 cases of penile fracture treated in the urology department of Zinder National Hospital between February 2014 and June 2021. The patients were from Zinder erea and its neighboring regions. The inclusion criteria were penile fracture diagnosed on the circumstances of occurrence, the clinical arguments and confirmed by surgery. The parameters studied were the age of the patients, the circumstances of onset, the marital status, the clinical signs, the treatment, and the outcome.

The average age of our patients was 33 years with extremes of 19 years and 51 years, on the They were 12 married patients, 3 of whom were on their wedding night, and 1 was single. The circumstances of occurrence were coitus for all patients. Investigations found a use of erectogenic drugs among the 12 married. The classic coitus misstep was found in 9 cases, the 4 others admitted that it was the woman above who ended up crushing the penis. All the patients had heard a cracking sound followed by sudden collapse of the erection and intense pain before noticing a deformation of the penis (Figure 1). 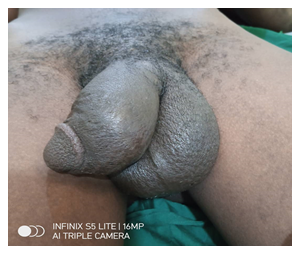 Clinical examination found a swollen, deviated penis in all cases. None of our patients have association with urethral injury. The average time elapsed before management was 7 hours with extremes of 12 and 46 hours. Treatment was surgical for All patients. Two types of incision were used; a coronal circumscribing-degloving incision in 84.61% of cases (Figure 2) and a direct incision for others. Those incisions were followed by evacuation of the hematoma and exposure of the defect in the corpus cavernosum and suture. 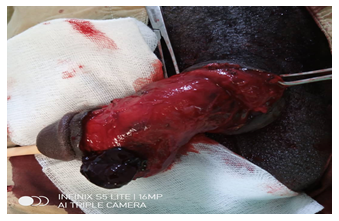 The lesion was right in 76, 92% of cases and 23, 08% left. The mean follow-up was 18 months (range 4-24 months) before being completely lost of view. Three complications were recorded including a curvature, an albuginea nodule interfering with sexual intercourse, and one case of erectile pain.

Penile fracture is a rare event. A meta-analysis by Eke Reported 1331 cases published worldwide in 65 years. According to the literature, highest frequencies were recorded in Maghreb [1]. In Sub saharian Africa, the incidence of penile fracture is particularly low, as evidenced by the various published series. In Niger before our series of 13 cases in 8 years, Sanda [2] had reported 2 cases over two years at Niamey. Our results are similar to those reported by some authors in the sub-region such as Diallo [3] in Senegal with 13 cases in 8 years, Rimtebaye [4] in Chad 14 cases in 8 years and Barry [5] in Guinea with 22 cases in 10 years. This low incidence observed in the different sub-regional series could have the same explications.

Indeed, in addition to the socio-cultural considerations which make questions of sex a taboo in these different countries, the use of traditional medicine also contributes to the under-evaluation of this pathology. The penis fracture occurs exclusively on an erect penis. The tunica albuginea is the solid membrane around the corpora cavernosa. This solidity is correlated to its thickness, which goes from 2mm in the flaccid state to 0.5-0.250mm when in erection [1, 6]. Young person, has particularly vigorous erection, which could explain the relatively high frequency of this pathology in men under 40 [7, 8, 4]. The average age of our patients was 33 years (19-51 years) and it was close to most literature reports [5, 9, 10]. Coital missteps or manipulations of the erect penis are the main circumstances for the occurrence of penis fracture [3]. Rimtebaye [4] and Kpatcha [11] respectively reported 62.28% and 66.66% of coitus missteps, whereas for Ndiaye [7] forced manipulation was the most frequent circumstance found in 17 cases. (33%) followed by Coital missteps in (20%) patients. The same etiology was found by certain authors from the Middle East [12-14]. In our study coital misstep was the only circumstance reported by all patients. The development of the media has contributed to the popularization of sexual fantasies. Three patients (10%) in our study had confided that it was the partner who had crushed their penis during a sexual intercourse where she was on it. This tendency was underlined by Erondu [15]. In our series, 92.30% (n=12) of our patients were married, three of whom were on their wedding night. It is now known for husband, that the wedding night is decisive for his sexual evaluation. Many of them therefore use aphrodisiac drugs to enhance sexual performance. Twelve (92.30%) of our patients confessed taking an aphrodisiac drug. Only one patient was single. Sexual intercourse was once allowed only after marriage in our traditional African societies. Lifestyle changes, urbanization, and the availability of contraceptive drugs have promote premarital sex. What makes the fracture of penis is seen lately in singles. In our series, we note one case, but for some authors such as Ndiaye [7], the frequency is higher in single people with 73% of cases.

The symptomatology of the penis fracture remains dominated by the triad of cracking, acute pain and sudden detumescence [10]. But the crackle is not always reported by all patients. The physical examination found a deviation of the penis on the opposite side of the lesion. A hematoma and subcutaneous edema will gradually develop, deforming the penis, giving the appearance of an "eggplant penis". The defect of the tunica albuginea can also be recognized on palpation. A bilateral fracture is possible but rare [16]. A urethral injury should be considered in the presence of urethrorrhagia or dysuria or even acute urinary retention. No medical imaging is essential for the diagnosis of corpora cavernosa rupture [12]. In our cases this triad was found in all our patients followed by a deformation of the penis. The average consultation time is variable in the literature. It was 7 hours with extremes of 2 and 46 hours in our series. It varied from 2 hours to 7 days for 63.9% of patients for Rajandeep et al. [10]. For Rimtebaye et al [4], it varied from 4 hours to 6 days.

The standard treatment for rupture of the corpora cavernosa in the acute phase is surgical consists to evacuate the subcutaneous hematoma and to suture the tear of the albuginea of the corpora cavernosa. Several approaches are possible. The coronal incision at the level of the balano-prepu¬tial sulcus with complete degloving of the penis has the advantage of allowing wide access to the cavernous bodies and the spongy body but exposes to complications such as infection, edema and skin necrosis, the frequency of which varies from 14 to 25% [17, 18]. The lateral and longitudinal incision opposite one of the corpora cavernosa allows an elective approach to the fracture site without cutaneous risk but sometimes at the cost of an unsightly scar. As in our series, the coronal approach (84.61%) was favored by Kpatcha, Sylla, Barry with respectively 100%, 83.33% and 95.45% of cases [5,9,11]. The lesion was on the right in 76.92% of our patients and 23.08% on the left. This predominant right of the tunica albuginea rupture was also found by Barry and Sylla in respectively 59.09% and 58.33% of cases [5,9]. The mean follow-up was 18 months. We recorded one penile curvature, a case of tunica albuginea nodule limiting sexual intercourse and one case of isolated per coital pain as adverse effects in three of the 13 patients. No cases of erectile dysfunction were reported in our series. Few complications have been reported in the literature, Rimtimbaye reports a single case of induration of the penis that did not compromise sexual intercourse, Idriss report 2.2% penile curvature, 5.5% scar fibrosis and Padja 12.5% penile curvature, 8.33% painful intercourse [19, 20]. 5. Conclusion The fracture of the penis is a relatively rare urological emergency occurring most often in young adults under 40 years of age. The diagnosis is clinical based on the circumstance of occurrence and triad; cracking, pain and swelling of the penis. Immediate surgical repair seems to be the best way to prevent complications such as fibrosis, curvature of penis and erectile dysfunction.