Lipomas are benign mesenchymal tumours that are rarely seen in the scrotum. Few cases of primary scrotal lipomas originating from the scrotal wall have been reported in the literature. They can mimic common affections such as an inguinoscrotal hernia, hydrocele or a testicular tumour. We describe the case of a giant primary intrascrotal lipoma presenting as scrotal swelling and discomfort. Findings from scrotal magnetic resonance imaging were highly suspicious for lipoma. The mass was completely excised and histological examination confirmed the diagnosis of lipoma. One-year follow-up revealed no local relapse.

Among the tumors affecting the scrotum and its contents, testicular neoplasia is the most commom. The para-testicular localization represents only 7% of the intra-scortal neoplasia localization, 70% of them are benign.lipoma is the most common type.We report a new case of para testicular lipoma in a 42 years old patient who confirmed by the pathological study of lumpectomy.Our work includes a literature review with a focus on diagnostic and therapeutic aspects.

A 42 years old, known with arterial hypertension, who had an increase in scrotal volume for 2 years without any notion of trauma or inflammatory involvement with moderate pain. The physical examination had returned to a good general state, with a scrotal mass right of elastic consistency, painless, of 8 cm, well defined and individualizable of the right testicle which is of normal aspect without nodule nor thickening. The left hemi-scrotum was normal and the ganglionic areas were free (Figure 1 Clinical aspect of the scrotal tumour.). It was easily distinguishable from the testicle. Both testicles and spermatic cords were normal and the tumour was without transillumination. Laboratory values were in normal ranges, including β-human chorionic gonadotropin and α-fetoprotein.

The scrotal ultrasound had objectified a straight testicle of size and echo normal structure, driven by a voluminous mass discreetly heterogeneous, well limited and without calcifications or necrosis ranges measuring 8 cm high and 7 cm thick. The contralateral scrotum was without abnormalities. Serum α-fetoprotein, beta-human chorionic gonadotropin, and lactate-dehydrogenase levels were within the normal ranges. The clinical and ultrasonography features determined us to request a scrotal magnetic resonance imaging. Images showed a globular shaped right scrotal tumour mass, with well-defined margins (Figure 2). 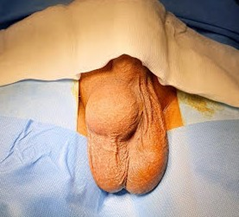 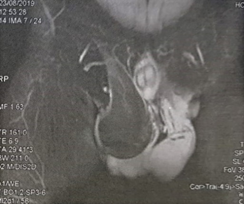 Surgery was performed, with excision of a mass about 10cm in major diameter from the right scrotal wall (Figure 3). Postoperative evolution was good. The anatomopathological study had objectified a mass weighing 25 gr, measuring 8 cm in diameter, of yellowish appearance and of soft consistency with a thin capsule. On histological examination, there was a benign tumor proliferation made of adipocytes arranged in lobules, of variable size, separated by conjunctival septa (Figure 3). After one year of follow-up, the patient is asymptomatic with no signs of tumor recurrence. 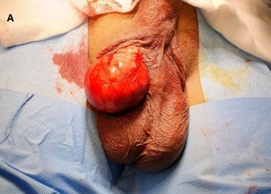 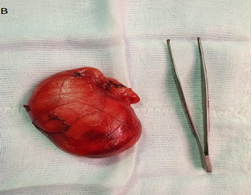 Figure 3: Intra-operator images. B): macroscopic aspect of the scrotal lipoma.

The para-testicular region is a complex anatomical area that includes the spermatic cord, testicular tunnels, epididymis, and embryonic remnants. Histologically, this region contains a variety of tissues (epithelial, mesothelial and mesenchymal) that explain the heterogeneity of tumors that can develop there. The para-testicular localization represents only 7% of the intra-scrotal neoplastic sites. The spermatic cord is reached in 90% of cases [1, 2]. About 70% of para-testicular tumors are benign. Lipoma is the most common benign tumor of testicular tissues across all ages [3].

It is a tumor of mesenchymal origin, derived from structures of the spermatic cord, formed by the proliferation of adipose tissue [4]. Found at any age, their development is most often unilateral, rarely bilateral, of variable size [5]. Clinically, the lipoma is not very symptomatic, manifesting itself by a sensation of scrotal fullness, with a rapidly progressive increase in scrotal volume, without any notion of previous trauma or inflammatory signs. The clinical examination reveals a scrotal or inguinal mass of soft, fluctuating and sometimes multilobed consistency. However a case of hard tumor, of stony consistency has been described [6]. But the data of the clinical examination can not prejudge the benignity or the malignancy of the lesions and no sign is pathognomonic. In the doubt of a testicular tumor, the determination of tumor markers (alpha-FP, beta-HCG) is always required. Ultrasound examination is the cornerstone of any scrotal mass syndrome. The ultrasound appearance of para-testicular lipomas is similar to that observed in the rest of the body, of variable echogenicity, usually hyperechoic or showing hyperechoic streaks, if the mass is bulky or showing signs of necrosis, it is difficult to differentiate it liposarcoma [7, 8]. In this case, it seems useful to use other means of imaging, the greasy nature of the mass is always recognizable: in CT, the spontaneous density of it is less than -30 Hounsfield Units. The MRI shows a hyperintense signal in T1 weighting, whereas in T2, it presents an intermediate signal in classical spin echo and a hyper signal in fast spin echo. In case of diagnostic doubt, a sequence with fat erasure can most often solve the problem by showing a decrease in the signal of the lesion [9].

Surgical treatment is required in case of symptomatic tumor, it consists of a tumorectomy after release of the testicle and spermatic cord.Histology is usually typical of lipomas found in other areas of the body, with a lobular, yellow-orange surface appearance that is irregular at the cut. The lesion is well defined and separated from the other structures by a thin capsule. Under the microscope, the cells are mature adipocytes, with a clear and bulky cytoplasm, separated by thin fibrous septa [10]. These tumors are of good prognosis and no case of malignant degeneration has been reported.On the other hand, cases of recurrence have been described [11].

Angiolipoma is an uncommon benign tumour that is rarely found in the scrotum but need to be considered when assessing a patient with scrotal mass. Ultrasound findings can be indecisive. An inguinal surgical approach provides a suitable exposure for complete resection. Histopathological examination is the only way to provide the definitive diagnosisto distinguish it from a lipoma-like well differentiated liposarcoma, thus determining the appropriate course of treatment.