Citation: Abeyagunawardena S, Jayaweera H, Abeyagunawardena AS. The Effect of Montelukast Sodium on the Reduction of Relapse Rates in Children with Steroid Dependent Nephrotic Syndrome. Archives of Nephrology and Urology 4 (2021): 009-017.

Background: Montelukast sodium (MS) a leukotriene receptor antagonist is known to reduce upper respiratory tract infections in children with asthma. A single centre study was conducted in Sri Lanka to evaluate the efficacy of MS in reducing the relapse rate of nephrotic syndrome (NS).

Methods and Findings: Patients with minimal-change disease, who were already on low-dose (<0.6 mg/kg) alternate-day prednisolone for a minimum of 12 months with or without adjuvant therapy were prescribed MS (4 mg for <6 years and 5 mg for >6 years) for 12 months. Urine protein excretion was recorded daily, by parents. Patients were on monthly follow-up, to assess relapse of proteinuria, episodes of infection and side effects of MS. 118 children were prescribed MS and 112 completed the 12 months of therapy. Median age was 6.2 years. Age range was 3.5-14.7 years. 79 were male and 33 were female. Significant reduction (p<0.001) in relapses was observed during MS therapy (mean=2.52 ± SD 0.60) compared to that of the previous year (mean=1.41 ± SD 0.87). The difference of relapse rates before and after the completion of MS therapy (mean=1.72 ± SD1.05) was also significant (p<0.001). The type of adjuvant therapy (Levamisole, Mycophenolate mofetil or cyclosporin A) did not have an impact on relapse rates during MS treatment. No significant side-effects were encountered with MS therapy.

Conclusion: The prescription MS is a potential therapeutic strategy in maintaining remission in childhood NS.

Nephrotic syndrome (NS) is the most common glomerular disease in children characterised by nephrotic range proteinuruia, hypoalbuminemia, hyperlipidemia and generalized oedema [1]. Studies have shown that incidence of NS is particularly high in South Asian children [2, 3]. Minimal-change nephropathy (MCD) is the most common histological pattern and a majority of these children respond favourably to corticosteroid therapy. However, about 70-80 % of children are likely to relapse after the initial oral corticosteroid therapy of 8 weeks, necessitating further courses of steroids and other immunosuppressive agents. These children are considered to have steroid dependant nephrotic syndrome (SDNS) [4]. Relapses are associated with life threatening risks such as sepsis, thrombosis, malnutrition and hypovolemia [5-8]. The aetiopathology of MCD is not fully understood and remain elusive. Some studies have suggested that MCD is a T helper 2-dominated (Th2) disease, because higher levels of serum interleukin-13 (IL-13) were observed in patients with MCD [9, 10]. Studies done on rats have also shown that over-expression of IL-13 leads to podocyte injury inducing a minimal-change-like nephropathy [11]. Infections, mainly viral upper respiratory tract infections (URTIs) are a frequent cause of relapse in NS [12, 13] which has led to the hypothesis that the up-regulation of T lymphocytes and cytokine release accompanying an URTI mediates a relapse [10]. Major cytokines that are involved in this process are interleukin (IL) 2, 4 and 13 [14]. Being a tropical country, viral respiratory tract infections are common in Sri Lanka. Patients with SDNS who are on immunosuppressive therapy, are likely to be more susceptible to viral infections due to the compromise in the immunity. Environmental and socio-economic conditions could further increase the risk of infections in these patients.

Montelukast sodium (MS), a selective reversible cys-leukotriene-1 receptor (LTD4 receptor) antagonist is used in the treatment of asthma and is reported to reduce airway inflammation associated with this disease [15-17]. Cysteinylleukotrienes(CysLT), leukotrienes C4, D4, and E4 (LTC4, LTD4, LTE4) are secreted mainly by eosinophils, mast cells, monocytes and macrophages, and exert a variety of actions such as inflammatory cell recruitment, bronchoconstriction, vasodilatation, increased microvascular permeability, exudation of macromolecules, and edema which emphasizes their importance as pathogenic elements in inflammatory states [3, 18, 19]. Several studies show MS is effective in reducing URTIs and delaying exacerbations of asthma [20-22]. The observation of relapses precipitated by viral episodes in the described tertiary centre [23], prompted the authors to test effectiveness of MSin reducing the upper respiratory tract infections which could potentially reduce the viral induced NS relapses.

All patients recruited for this study were attending the nephrotic syndrome clinic at Teaching Hospital, Peradeniya, which is a tertiary nephrology referral centre in Sri Lanka. As an institutional policy the medications could be provided only for a month, and as such all these patients were routinely reviewed on a monthly basis. Demographic data and clinical data was entered in a data base while patients too had patient held records. The parents were all trained to test and record urinary protein excretion. Patients receiving low dose (<0.6 mg/kg) prednisolone on alternate-day for a minimum of 12 months with or without adjuvant therapy as maintenance prior to the study were considered for this study. Having had two or more relapse episodes during the past 12 months was an essential criterion for recruitment. Levamisole (LEV), Mycophenolate Mofetil (MMF) or Cyclosporin A (CyA) were used as adjuvant immunosuppressive drugs. One hundred eighteen patients (81 males and 37 females) who satisfied the inclusion criteria (Table 1) were prescribed MS for a period of 12 months of which 112 patients were considered suitable for analysis. Age at entry ranged from 3.5 to 14.7 years (median 6.2). At the NS clinic, patients were reviewed on monthly basis focusing on urine protein excretion and potential side effects of MS therapy. Following the completion of 12 months of MS therapy these children were monitored for a further 12 month period focusing on viral infections and the relapse of the disease.

Table 1: Inclusion and exclusion criteria to the study.

Montelukast sodium was prescribed for a period of one year at a dose of 4 mg for children below 6 years and 5 mg for above 6 years. The number of relapse episodes was compared with the twelve months before, during therapy and after completing MS therapy. Each patient had a patient health record and parents of the patients were trained to test and record urine protein excretion. A freshly voided urine sample was tested each morning and the presence of 3+ proteinuria, for three consecutive days was regarded as a relapse. In the case of a relapse the nephrology team was contacted by the parents or through their local healthcare clinic, and the patient was commenced on the standard relapse regimen. At each clinic visit the parents were interviewed to ascertain whether any side effects were observed namely cough, diarrhea, fever, headache, abdominal pain, runny nose and throat irritation. Full blood count, serum creatinine and liver enzymes (SGPT) were performed on all patients, every 6 months. All procedures performed in the study were in accordance with the ethical standards of the Scientific and Ethics committee, Faculty of Medicine of the University of Peradeniya and with the 1964 Helsinki declaration and its later amendments or comparable ethical standards. Informed, written consent was obtained from the parents and/or the patients where appropriate prior to enrolment.

Results were described as the mean ± SD, as appropriate. The significance of the data was assessed using SPSS version 20.0 (SPSS Inc, Chicago, IL, U.S.A.). P values < 0.05 were considered significant. The rates of relapse episodes and mean steroid doses were analyzed by using t-tests.

There was a significant reduction in the rate of relapse during the 12 months of MS therapy when compared to the 12 months prior to MS therapy (p<0.001). The mean yearly relapse rate was 1.41 during MS therapy, compared with 2.51 for the 12 months before, suggesting that prescribing MS can reduce the risk of relapse in frequently relapsing NS (Table 2 and Figure 1). The mean relapse rate for the 12 months post MS therapy is 1.72 which is significantly lower than the rate prior to therapy (p<0.001), suggesting a natural improvement to the disease with age or an alteration of the disease course by MS. The results also confirm that MS therapy has significantly reduced the number of viral URTI rate during MS therapy (Figure 2). No significant side-effects were encountered. Six children were excluded due to non-compliance.

Table 2: Summary of results in the years prior to, during and after MS therapy. 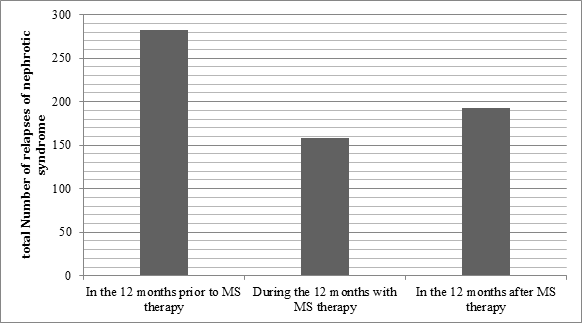 Figure 1: Comparison of the number of relapses during the three stages of the study. 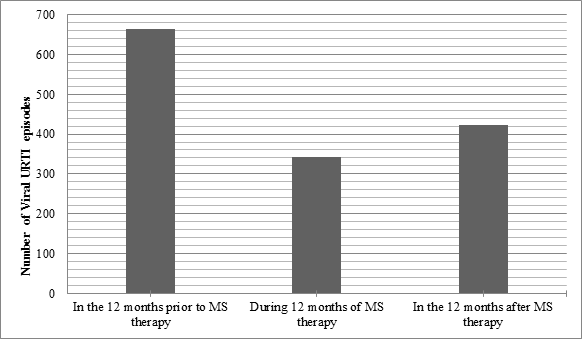 Figure 2: Comparison of the number of episodes of viral URTIencountered during the three stages of the study.

Several studies reveal that MS is effective in delaying exacerbations of asthma arising due to viral respiratory tract infections [20, 21, 24] and also in reducing incidences of viral infections in adult asthmatic patients [22]. Kloepfer et al. found that MS attenuates eosinophilic inflammation in the airway and thereby it contributes to clinical benefits during a viral infection [25]. In another study MS attenuated initial response to primary respiratory syncytial virus infection and altered consequences of re-infections in mice [26]. This evidence points to a significant role of MS in reducing the incidences of viral infections. The results of this study too supported this observation with a significant reduction in the number of episodes of viral URTI observed during MS therapy. Hence it could be argued that this role of MS could be beneficial to patients with nephrotic syndrome as well. There is strong evidence that proteinuria in MCD is mediated by cytokines [27]. Several studies have shown the up regulation of IL-13 gene is correlated with relapses and long term outcome of children with NS [10, 28, 29]. Kimata et al. state that IL-13 is involved with the enhanced production of IgE and IgG in NS.[28]. Receptors for IL-13 have been demonstrated in podocytes, with evidence favouring direct effects of this cytokine on podocytes [30]. Considering these facts, a study by Lai et al. in 2007 revealed that IL-13 overexpression in the rat could lead to podocyte injury [11]. Although not yet studied extensively in the field of nephrology, IL-13 is known to influence leukotriene levels [31] and there is evidence of a cross-talk between IL-13 and leukotrienes in exerting the inflammatory effects of IL-13 [4, 32]. Leukotrienes are pro-inflammatory, arachidonic acid metabolites produced by leukocytes, eosinophils, mast cells, and macrophages via 5-lipoxygenase [33]. IL-13 can up-regulate both the leukocyte biosynthesis of leukotriene D4 (LTD4) and the expression of cellular type 1 cysteinyl leukotriene receptors (CysLT1). Moreover, LTD4 can up-regulate production of interleukin-13, as well as the expression of its receptor. The result of this cross-talk is a self-perpetuating circuit in which IL-13 and its receptor mediate some of the actions of LTD4 and LTD4-CysLT1 mediates some of the actions of IL-13 [34]. Based on these findings it is possible that apart from the reduction in URTI episodes during MS therapy, MSis potentially useful in inhibiting the pro-inflammatory effects of leukotrienes and thereby IL-13 resulting in fewer relapse episodes in NS.

The results of this study showed that the relapse rate in children with frequently relapsing NS decreased significantly after MS treatment with no significant side-effects. This could be mainly due reduction of viral upper respiratory infections by MS, which in turn resulted in a reduced relapse rate. An additional possibility is that MS acted to inhibit the pro-inflammatory effects of LTD4 and thereby IL-13. Thus reduced expression ofIL-13 could have restored permeability of the injured podocytes as well. Future in vitro studies could investigate such possibilities in order to establish mechanisms and pathways of Leukotriene receptor antagonists action in renal disease. These results suggest that the use of MS could be one of the potential therapeutic strategies in minimal change nephrotic syndrome, with the added advantage of reducing the steroid burden. Our results would be particularly of interest to South Asian and African countries where similar environmental and clinical settings to Sri Lanka are often found.

The study was self-funded.