Lower ureteric strictures are a common cause for unilateral hydroureteronephrosis, commonly resulting from previous surgeries, weather endoscopic, laproscopic or open. Devascularisation of the ureter resulting in fibrosis forms the underlying pathophysiology of stricture formation. We report a case of ureteral stricture resulting from angioembolization done for a bleeding arteriovenous malformation (AVM) of the uterus.

A 24 year old female presented with right flank pain for 3 months. Her medical history revealed sputum positive pulmonary tuberculosis for which she received anti tubercular medication. She also had history of vaginal bleeding, following incomplete abortion, for which suction evacuation was performed. Ultrasonography revealed a mass in the uterus which showed increased vascularity on Doppler examination, suggestive of an arterio-venous malformation. For continuous vaginal bleeding, angiography followed by angioembolisation of AVM was done with PVC beads. She developed right flank pain two months after the angioembolisation. On ultarsonography, patient was found to have right hydroureteronephrosis. On further workup, computerized tomography (CT) scan revealed right hydronephrosis with right hydroureter till lower border of sacroiliac joint. Renal scan suggested decreased right renal function (split function of 18% for the right kidney). Hence, right percutaneous nephrostomy (PCN) was done for urinary diversion, and daily PCN output was 700-900 ml over 24 hours. Patient was investigated for cause of ureteric stricture. Workup for genitourinary tuberculosis, which included urine for acid fast bacilli (AFB), TB-PCR, MTB culture, and cytology for malignancy was negative. It may be noticed here that, the ultrasonography done prior to angiography was normal and ultrasonography done two months after angioembolisation was suggestive of hydronephrosis (Figure 1). 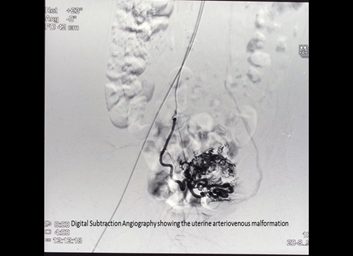 Combined study of nephrostogram and retrograde pyelogram was suggestive of right hydronephrosis with hydroureter with smooth, abrupt tapering at lower border of sacroiliac joint. Urinary bladder and both ureteric orifices were normal on cystoscopy. Urinary bladder capacity was 550 ml. On RGP there was 3 cm complete stricture above right ureteric orifice. No radiological evidence of tuberculosis, could be found. Patient was then planned for an ureteroneocystotomy. Intraoperatively right ureter was found to have a smooth, thin walled, complete stricture of around 4 cm lengths, at the lower border of sacroiliac joint. There were minimal adhesions around ureter and uterus and the adjoining viscera were normal. Right ureteric stricture was resected and ureteroneocystotomy (anti refluxing) with psoas hitch was done. Histopathology of the resected stricture was suggestive of ischemic tissue with no necrosis and/or granuloma. Postoperative nephrostogram and cystogram were performed on 12th postoperative day, which revealed a healed ureterovesical anastomosis with no contrast leak present (Figure 2). 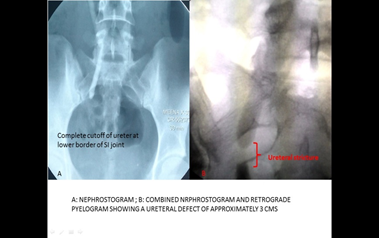 Figure 2: A: Nephrostogram; B: Combined Nephrostogram and retrograde pyelogram showing a ureteral defect of approximately 3 cms.

Ureteral strictures may be classified as extrinsic or intrinsic, benign or malignant, and iatrogenic or non iatrogenic. Benign intrinsic stricture may be congenital (eg, congenital obstructing megaureter), iatrogenic, or non iatrogenic (e.g., those that follow passage of calculi or chronic inflammatory ureteral involvement [e.g., tuberculosis and schistosomiasis]). Iatrogenic benign strictures may result from previous pelvic surgeries like various gynaecological procedures, for both benign and malignant conditions, radiotherapy for varios malignancies, diagnostic and therapeutic ureteroscopic surgeries and renal transplantation surgeries. Ischemic strictures tend to be associated with fibrosis and scar formation and thus are less likely to respond to endoureterotomy [2-6].

Patients with ureteric strictures present with flank pain, flank fullness, or abdominal fullness or even deterioration of renal function. Diagnosis involves initial evaluation with imaging studies such as ultrasonography or computerized tomography scans which reveal hydroureteronephrosis proximal to the site of stricture. Intravenous pyelography and a retrograde pyelogram would establish the exact location and length of the strictured segment. Indications for intervention in patients with ureteral strictures include pain, infection, or obstruction, which may threaten a patient's renal function. Less common indications may include stone formation proximal to an obstruction or hematuria.

Our patient had a history of angioembolization done for a bleeding arterio venous malformation of the uterus. Angioembolization was done for a branch of the uterine artery, which in turn is a branch of the anterior division of the internal iliac artery. Other branches of the internal iliac artery, arising in close proximity of the uterine artery are the superior vesical, inferior vesical and the middle rectal, all of which contribute to the blood supply of lower part of ureter. Jeopardization of blood supply from any of these branches, during the angioembolization process, may result in ischemia and development of stricture of the lower ureter, as happened in our case.

Development of ureteric stricture following surgeries or due to infection like tuberculosis is a common presentation, but that following angioembolization for any reason is unheard off. The clinical presentation of these patients are not straightforward, and a diagnosis cannot be reached unless it is kept in mind that angioembolization for arterio venous malformations of the pelvis can lead to stricture formation in the lower ureter, the basic pathophysiology being ischemia related fibrotic changes and resultant narrowing.