Broiler meat is the most consumed poultry product in Nepal. To increase the productivity and met the demand there is high use of antibiotics for prophylactic and as growth promoter in poultry industry. Continuous use of Antibiotic in broiler and supplying them in market before with-drawl period had led to development of Antibiotic Residue. This study aims for detection of antibiotic residue in marketed broiler meat of Kathmandu Metropolitan City. A total of 150 meat samples were taken (75 liver +75 breast muscle), and 300 tests performed for two group of antibiotics Group A(Tetracyclines) and Group B (macrolides, aminoglycosides and sulphonamides). Purposive and randomized sampling procedure was done and commercially available test kit was used. 74 tests were found to be positive for antibiotic residue and 53 of them were above the Minimum residue level. The true prevalence was found to be 28.25%. The presence of antibiotic residue in meat found to be statistically significant(p<0.05). Antibiotic residue was found higher in liver than in muscle. This study concluded that antibiotics residue was found higher than recommended in poultry meat of Kathmandu metropolitan city, which could expose serious human health hazard. Hence to mitigate the situation one health and multisectoral approach guiding for safe and rational use of antibiotics should be implemented.

There is widespread use of antibiotics in animal production, these antibiotics are not only used as therapeutic or prophylactic purpose but as growth promoter. In poultry industry antibiotics are feed with drinking water or with feed [1], [2]. Antimicrobial drugs are used haphazardly in the treatment of disease [3] by the farmers without laboratory diagnosis, veterinary prescription and supervision [4]. Unsafe drug residue tends to accumulated in edible parts of food animal e.g. breast muscle of chicken [5]. The residue level above the Maximum Residue Level (MRL) is called violative residue which causes serious public health hazards and development of antibiotic resistance [6]. The consumption of these trace antibiotic residue from food animal, disrupt the human intestinal microflora. These intestinal microflora acts as barrier for colonization of pathogenic bacteria in intestines [7]. The consumption of animal foods with antibiotic residue may impose health issue like hypersensitivity reaction and disruption of normal gastrointestinal microflora [8]. In a survey conducted in Kathmandu city capital of Nepal, it had shown that the total veterinary drugs sold without prescription increased from 29% to 71% in the period of two years from 2010-2012[9]. This also suggests that there is huge exploitation of antibiotics in animal and poultry sector in Nepal. Very few studies had been done for detection of antibiotics residues in poultry meat. The objective of this study was to determine the level of antibiotic residue in marketed meat of Kathmandu Metropolitan City and compare with Minimum Residue Level set by WHO and FAO.

This study was carried out in Kathmandu Metropolitan city. It is the capital city of Federal Democratic Republic of Nepal.It has an area of 51 square kilometer and population density of 13,225 per square kilometer [10].

The cross-sectional Studywas conducted from February to June 2019. 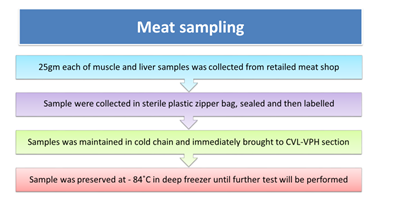 The flow chart of sample collection is illustrated as follow:

For analysis process, Samples were tested for two group of Antibiotics that is Group A(Tetracyclines) and Group B (Macrolides, Sulphonamides and Aminoglycosides) 300 test was performed. RR test Kit of Co. Ltd., Thailand used was used for test. The protocol of the test kits was followed as per the instructions given in manual provided by the G9 Co. Ltd. At very beginning sample was minced in mortar and pestle. Now 5gram of the sample was mixed with 50gram of water and placed in centrifuge tube. In the centrifuge tube 5ml of extraction solution either of Group A or Group B is added. The centrifuge tube is placed in Shaker for 15 minutes, followed by water bath 60 degree Celsius for 5 minutes. The centrifuge tube was paced in centrifuge machine and centrifuged at 3000-4000 rpm for 51 minutes. After this 3.75ml supernatant liquid was collected and its ph was adjusted by adding few drops of 1N NaoH solution. Now 4 drops of Supernatant in Prepared Tubes and Negative control in prepared tubes, they are placed for incubation in water batch at 64 degree Celsius for 2.45 hours. 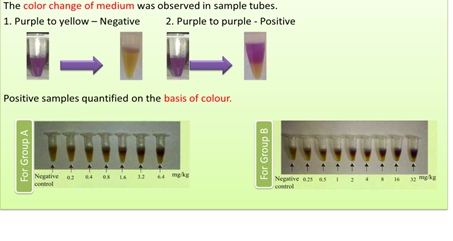 Datawere entered in MS-EXCEL 2010 and chi square analysis was done with OpenEPi Version`3.01 with significance level defined at P<0.05.

The results of this study indicated that residues of antibiotics like aminoglycosides, tetracyclines, sulphonamides and macrolides are detected in breast and liver samples. 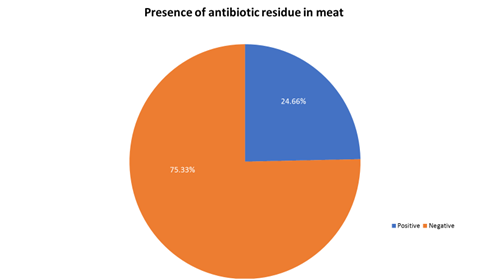 Liver is one of major site for metabolism of drug and storage of metabolites. Total of 60(40%) liver samples were found to be positive for antibiotic residue. Group wise illustration is mentioned in a table.Presence of antibiotic residue in liver was found statistically significant (P<0.05) 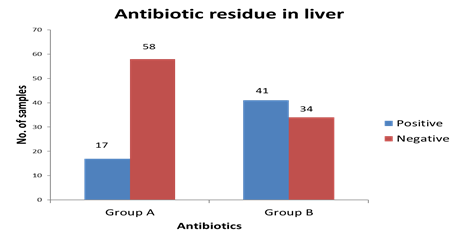 3.4 Antibiotic residue of group A (Tetracyclines)

Total of 21 meat sample was found be Antibiotic from Group A. Further illustration is given in table alongside.Presence of residue of tetracycline group in different samples were found statistically significant (P<0.05).

Table 4: Residue of Group A antibiotics in different samples.

Figure 5: Residue of Group A antibiotics in different samples.

3.5 Antibiotic residue of Group B (Macrolides, Aminoglycosides and Sulphonamides)

A total of 21 samples were found to be positive for Group B antibiotics. Presence of residue of macrolides, aminoglycosides and sulphonamides in different samples were found statistically significant (P<0.05). Further illustration is given in alongside table.

Table 5: Antibiotic residue of Group B.

Figure 6: Residue of Group B antibiotics in different samples.

52 samples were found to be over the minimum residue limit. 71.62% of positive samples exceeded MRL value as compared with MRL value set by Codex Alimentarus Commission, 2018[12]. Further illustration is in table. 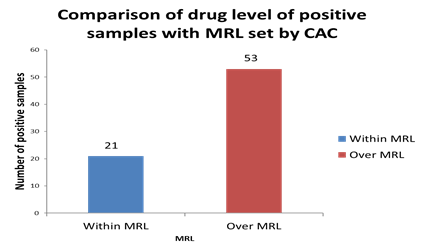 In this study, presence of antibiotic residue in the marketed chicken meat from retail meat shops was found to be 28.25% which is found to be higher than the findings of that is 22% [13] and 18.91% by [14].This difference may be due to increasing trend of marketing birds just immediate after using antibiotics [15] reported 63.88% in Chitwan and Kathmandu, [16] reported 60% and [17] reported 50% prevalence for at least one of the antibiotics. The differences may be due variation in methodology used and test kits used. Among 24.66% of positive samples, the residue was found higher for Group B (35.33%) than Group A (14%).This might be due to extensive use of Group B in the poultry that’s why the residue may be higher than that of Tetracycline.Among 24.66% of positive samples, the residue was found higher in liver (40%) than in muscles (10.66%).This is similar to the findings of [13] with 17.12% positive in liver and 13.62% positive in muscle, of [14] with 16 (39%) muscle and 10 (71%) liver samples positive for antibiotic residue.The higher percentage of residues in liver than muscles in this study may be probably due to the involvement of hepatic metabolism in drug elimination through the mechanism of biotransformation and excretion [18].Among 24.66% of positive samples, 28.37% samples exceeded the MRL value set by Codex Alimentarus Commisson,2018. This might be due non-observance of withdrawal period prior to slaughter of poultry birds.

The results of present study suggest that there is high use of antibiotic in poultry sector which leads for residue in poultry meat. There is significant antibiotic residue in the marketed broiler meat of Kathmandu Metropolitan City. This also questions for effectiveness of various program launched by government and nongovernment sector to control haphazard use of antibiotics and recommends for establishment of proper surveillance program at national and local level to detect the antibiotic residue in marketed meat. Raising awareness on various negative effect of antibiotic residues among the framers, consumers, pharmacy staffs, paravets and giving proper training to veterinarians to follow specification, guidelines, standards related to antibiotics.

Authors declare that this study was carried out through the internship allowance of Tribhuvan University, Institute of Agriculture and Animal Science, BVSc and AH program. The kits were supplied by Central Veterinary Laboratory, Tripureshwor, Kathmandu.

Authors would like to acknowledge Dr. Tulsi Ram Gompo, Mr. Yogendra Prasad and all the helping hands while carrying out this research.