Pain management is a worldwide public health concern particularly in women given its high prevalence and severity. Moreover, current pharmaceuticals induce numerous side effects including dependence and tolerance. Therefore, the search for novel therapeutic targets for the treatment of various forms of pain is of foremost importance. In this regard, Curcuma longa (C. longa) or turmeric has shown anti-inflammatory and immunomodulatory effects. Henceforth, in this work, we evaluate the potential anti-nociceptive and anti-inflammatory effects of C. longa in two models of peripheral inflammation in male and female rats. Rats were administered with the inflamogens carrageenan (acute inflammation inducer) and complete Freund’s adjuvant (CFA) (persistent inflammation inducer) in the hindpaw to elicit mechanical allodynia and paw oedema. At the peak of mechanical allodynia, C. longa was administered orally and mechanical thresholds and paw size were monitored until the mechanical thresholds were back to baseline values. C. longa reduced mechanical allodynia in rats with acute or persistent inflammation-induced allodynia in male and female rats to a similar degree. This is the first study to employ a combination of pharmacodynamic models of acute and persistent inflammation to assess efficacy of C. longa on inflammatory pain behavior, also considering sex differences. We found that C. longa reverses inflammation-induced mechanical allodynia in male and female rats therefore showing promise as an effective anti-nociceptive agent. When using the carrageenan and CFA models, both male and female rats can be used without concerns related to sex bias.

Inflammation is known to induce swelling and pain [1]. While acute inflammation is protective, chronic is detrimental, displaying spontaneous pain, allodynia and hyperalgesia [1]. Moreover, there is a major prevalence and intensity of pain in women compared to men [2]. In addition, current therapies for treatment of chronic pain are inadequate and some can induce chronic pain, e.g. opioids [1] and chronic use of non-steroidal anti-inflammatory drugs (NSAIDs) can result in several adverse effects including damage to the gastrointestinal tract [3]. To bridge this gap and find novel therapeutic targets, we rely on animal models that mimic inflammatory processes and have translational value.

Administration of the inflamogens carrageenan or complete Freund’s adjuvant (CFA) results in mechanical allodynia and swelling, therefore, extensively used to test prospective analgesic and anti-inflammatory compounds [4, 5]. For instance, CFA produces a long-lasting inflammatory response accompanied by mechanical allodynia lasting between 1 and 2 weeks with peak observed on day 3 post-administration [6]. Moreover, CFA increases the expression of prostaglandins as well as COX-2 in the spinal cord within hours [7]. Carrageenan induces acute inflammatory pain, which is established already at 1 hr and peaks at 4 hr post-carrageenan administration [5, 6].

At the site of injection, carrageenan increased the expression of prostaglandins, nitric oxide (NO) and tumor necrosis factor-α (TNF- α) [8, 9] and interleukin (IL)-1β (IL-1β) in serum [10]. Therefore, CFA and carrageenan are two well-stablished models to test potential anti-inflammatory and analgesic compounds.

Plants provide abundant secondary metabolites with possible physiological effects in humans [11, 12]. Curcuma longa (C. longa) or turmeric is a plant member of the Zingiberaceae, native to Asia [11, 12]. C. longa consistently displays anti-inflammatory and anti-oxidant properties [11-13]. In particular, C. longa reduced the expression of IL-6, TNF- α and interferon-γ (IFN- γ) in vitro [14], molecules of the inflammatory soup, in vitro. Therefore, in the current study and, for the first time, we characterized the possible anti-inflammatory and anti-nociceptive effects of C. longa in two pharmacodynamic rat models of peripheral inflammation and pain in male and female rats.

Male (n=61) and female (n=62) Wistar rats 2-3 months of age from our local animal facility at the Centro de Investigacion en Reproduccion Animal (CINVESTAV, Mexico) were housed three to four per cage in a room maintained on a 12-hour light/dark cycle with ad libitum access to food and water. Three cohorts of rats were used for our experiments to test biological properties of C. longa. The first cohort was treated with carrageenan, the second cohort with CFA and a third cohort used for open field test (OFT) experiments.

All procedures complied with the National Institutes of Health Guide for the Care and Use of Laboratory Animals, within the technical guidelines for the production, care and use of animals in the laboratory issued by SAGARPA Mexico (NOM-062 ZOO-1999) and ARRIVE guidelines for the use of animals [15]. All efforts were made to minimize animal suffering. If animals displayed signs of distress prior or during experimentation, they were immediately assessed by a veterinarian and, if necessary, euthanized.

In brief, rats were acclimated to a stainless steel grid within individual Plexiglas boxes (20 x 13 x 10 cm; three white opaque walls and one clear wall) for 60 min, and then tested for baseline (BL) mechanical thresholds with Von Frey monofilaments (Stoelting Inc., IL, USA) [6, 16]. For each animal, the mid-plantar region of the left hind paw was stimulated with an incremental series of eight monofilaments of logarithmic stiffness. The 50% withdrawal threshold was determined using the up-down method of Dixon, modified by Chaplan et al.(1994) [17] . First, an intermediate Von Frey monofilament (number 4.31 exerting 2.0 g of force) was applied perpendicular to the plantar skin, causing a slight bending. If there was a positive response, consisting of a rapid withdrawal of the paw within 6 seconds, a smaller filament was applied. In contrast, a negative response within six seconds resulted in the use of a larger filament. After BL mechanical thresholds were evaluated, paw thickness was determined with a calliper according to the McCarson method [4]. Then, either CFA or carrageenan was injected.

To dissociate the impact of C. longa on antinociception from sedation, locomotor activity was measured using the OFT. The OFT assessed the total locomotion of the animals after treatment with C. longa. In brief, this test was carried out in a square arena (90*90*45 cm) with no top lid [5]. The arena was divided into 25 equal-size squares with 300 LUX of light intensity.

Paw oedema measurement and von Frey filament assessment were performed at 15, 30, 60, 90 and 120 minutes post-treatment. For OFT, rats were first habituated to the behavioral room for 60 min, then injected with either C. longa or vehicle, placed in the arena and recorded for a 60-min period. Total locomotion in the arena was evaluated by a subject blind to the testing condition. The arena was cleaned with ethanol solution (70%) prior and after each trial.

3.2 Curcuma does not modulate locomotor behaviour in rats 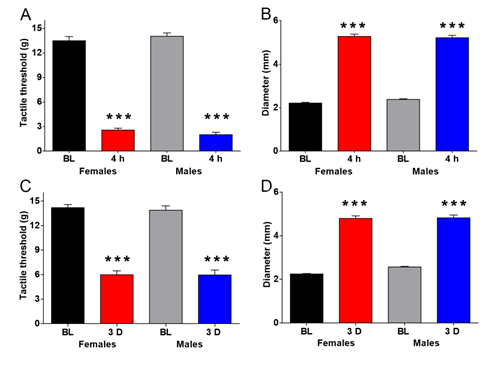 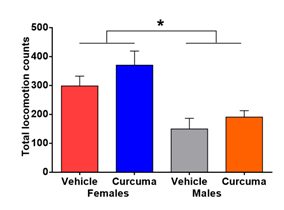 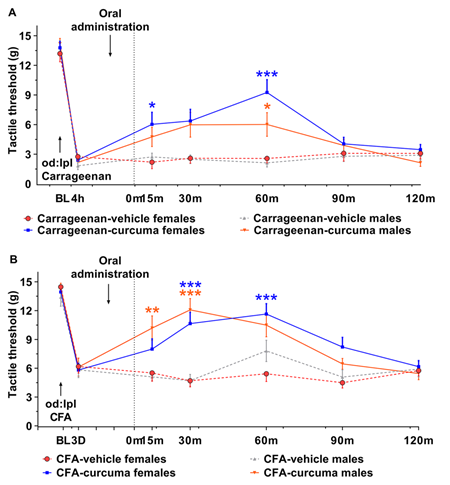 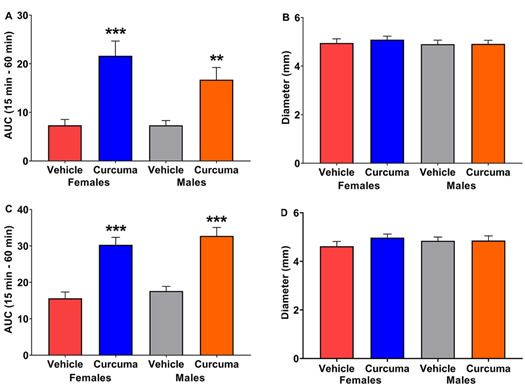 As expected, administration of carrageenan or CFA induced oedema and mechanical allodynia ipsilateral to the site of injection. Moreover, this is the first study that evaluates the anti-nociceptive effects of C. longa in two models of peripheral inflammation and pain in male and female rats. Administration of C. longa transiently reversed the inflammation-induced mechanical allodynia in both sexes in rats. First, we evaluated the effect of C. longa, administered at 100 mg/Kg in rats undergoing nociception and locomotor behavioural tests.  Previously, Zhu et al. (2014) showed that curcumin dosed at 10-40 mg/Kg, did not affect spontaneous locomotor activity. Similarly, the present study showed no changes in locomotor activity suggesting an analgesic rather than a sedative effect.

The present results show that C. longa displays anti-nociceptive effects on carrageenan- and CFA-induced mechanical allodynia in male and female rats.  Previous studies have shown that curcumin, display anti-nociceptive properties in other models of pain. For example, in rats treated with CFA in the joint, curcumin reduced behavioural signs of pain [18]. Acute administration of curcumin also transiently reversed the mechanical allodynia in a male rat model of postoperative pain [19]. A limitation of both studies is they were carried out only in male rodents. The present study show  an anti-nociceptive role of C. longa in male and female rats. Moreover,, co-administration of C. longa with Allium hookeri supressed the expression of cytokines namely IFN- γ, IL-1β, IL-6, IL-13 and IL-17, known to regulate inflammation and pain [14]. Therefore, we hypothesize that C. longa induces anti-nociceptive effects by modulating the inflammatory soup.

Most of the studies using preclinical models of pain are usually only run in males although women present higher prevalence of pain [2, 20]. Oddly, no more than 10% of preclinical research is undertaken evaluating sex differences [20]. Preclinical studies show that  female rodents have greater sensitivity to pain while male rodents are more sensitive to analgesic compounds [2]. In the present study, we observed that inflamogen induced mechanical allodynia generates a similar response in male and female rats, adding to previously published literature. Moreover, C. longa presented similar anti-nociceptive effects in male and female rats in both the models assayed. In contrast, there is cumulative evidence of pharmaceutical compounds displaying greater benefits in male rats [2]. Our group recently showed that cerebrolysin, a multimodal neuropeptide preparation, was more effective in female rats treated with CFA or carrageenan, suggesting that these models of inflammation-induced pain can be used to determine sex differences [6]. These models will be useful given the need for further research to assess sex differences in the mode of action of bio-pharmaceutical preparations.

The results presented in this study are novel as we are the first to demonstrate analgesic properties of C. longa in two models of inflammatory pain and, importantly, the first to show such analgesic properties in both sexes in rats, which will permit further studies to be conducted in either sex, without concerns of bias. These findings extend our knowledge of the effect of C. longa on pain and inflammation, signalling the need for further clinical studies to confirm translational relevance.

The authors have no known conflicts of interest in regards to the materials discussed in this manuscript.

JCMM and GF recognize the National Research System of Mexico (CONACyT) for membership. MABC and GGP thanks CONACyT for scholarships (No. 775675 and 2019-000037-02NACF) respectively.. This work was funded by CINVESTAV.