Benefits of Robot-Assisted Rehabilitation in Stroke Patients: A Follow up Study

Background: Stroke is found as leading cause of death in the world. Yet, the consequences of stroke spread beyond patient mortality and thus the post-stroke care to reduce patients’ dependency relies on rehabilitation.

Purpose: To quantify the benefits of robotic tilt table rehabilitation on improving the quality of living and ga- ining functional independence in stroke patients.

Methods: A total of 63 stroke patients (age 50.8 ± 6.86 years) were assigned for 30 days of robotic tilt table rehabilitation on Erigo tilt-table. NIHSS, MMSE, Modified Ashworth Scale, QOL and muscle strength (affected upper and lower limb) outcomes were assessed at baseline (day 0), after (day 30) intervention and on 90th day of follow up.

Results: Patients had shown a significant improvement in all the variables with time.

Conclusion: The robot-assisted training along with home-exercise program is found to be effective in rehabilitation of stroke patients.

Stroke is the most common, serious, and disabling health-care problem worldwide. The Early mobilization of the patient prevents the ill effects of deconditioning and prevents secondary impairments after stroke [1]. The use of therapeutic rehabilitation robots is rapidly increasing during the last two decades as they deliver a high-dosage and high-intensity training, making it useful for patients with motor disorders [2]. The robotic tilt-table consists of a stretcher which can be tilted between 0°-80° and footplates with integrated springs for leg loading. Footplates do stepping-like movements. The basic principle of robotic tilt-table is a combination of mobilization out of bed, body verticalization, along with cyclic loaded rhythmic leg movements. It is aproven prophylaxs to prevent various secondary complications due to prolonged bed rest in various motor disorder patients. The benefits offered by the robotic tilt-table are as follows:

Acute stroke patients' rehabilitation the acute stroke patients during the hospital stay has decreased, so recovery often is not complete at the time of discharge. The consequences after discharge may involve not only persistent neurological impairment but also lifetime disability. Thus, a further exercise program is needed to maximize patients’ function in overcoming their disabilities. Several studies have suggested that home rehabilitation is more effective and cheaper than usual care [8, 9].

It may not be feasible for therapists to supervise all rehabilitation, especially in a home environment. The patient's adherence to home exercise programs is vital for a complete rehabilitation and could improve the quality of living [10], The home exercise program can cut short the treatment cost and help to avoid morbidity and potential ill effects of immobility [11]. It also has a positive effect on functional outcome [12]. Thus, our study hypothesize that robot-assisted the intervention followed by a home-exercise program is effective in the rehabilitation of post-stroke patients

Total of 63 hemiplegia patients from in-patient and out-patient department of Neurology, aged 30-60 years either male or female who was diagnosed clinically by a neurologist with ischemic or hemorrhagic stroke, within 7-28 days of onset and National Institutes of Health Stroke Scale (NIHSS) between 11-22 were included for this study. The present study has the approval of the Institutional Local Ethical Committee and informed consent were obtained from all the participants. Subjects were excluded from the study if they are with metal implant, repeated stroke, chronic renal failure/associated renal problems, MMSE scores less than 10 and speech problem (aphasia), hemiplegic due to malignancy, infections, tumors, brain injury etc., Poor or loss of sensations in lower limbs and balance issues in sitting.

The subjects assigned for robotic tilt-table rehabilitation. The same tester and the same physiotherapist who is supervising assessed the outcome variables such as Upper extremity and lower extremity muscle power, NIHSS, Modified Ashworth scale of spasticity, MMSE, and QOL Day 0 (baseline), Day 30 (Completion of protocol) and on Day 90 (follow-up). Test and retest were conducted in the same place in the same environment. Before starting of the treatment protocol, the subjects were explained and made clear about the variables to be measured and their outcomes. The subjects were also informed about the experimental risks if any. The robot tilt-table training was given for 30 regular days (except Sunday) and the patient stayed in the hospital for these 30 days treatment. The duration of each individual treatment session was about 50 to 60 minutes per day. During the period of 30 to 90 days, all the subjects were asked to do a home exercise program (Figure 1). All subjects were allowed to take treatment under the supervision of the neurologist for their comorbid condition. No other treatment will be allowed other than mention above.

Number of sessions per week: 6

Duration of each session: 40 minutes.

Number of weeks of treatment: 4 weeks.

A 15 minutes range of motion, strengthening and stretching exercises for shoulder, elbow wrist and hand was given after the Robotic tilt table exercise (Figure 2).

2.3.2 Follow-up program (Home Exercise Program): In a period of 30-90 days, subjects were asked to do a home-exercise program. All the patients were provided with a manual consisting of exercises to be followed at home with instructions and pictorial illustrations. These exercises were once asked to do under the supervision of physiotherapist and advised to adhere to the exercise program strictly. The patients were asked to perform daily the prescribed home exercises on their own or with the help of attendant. After every 15 days, the adherence of the patient to home exercise programme is ensured either by direct contact at hospital or telephonically. Patients can come for follow-up at any time during this period when they forget or need to have any other problem while performing it. All the exercises were carried out into two sets of ten repetitions twice a day.

No specific gait training or weight-bearing exercises was given but ambulation was suggested to all the patients if they could ambulate. 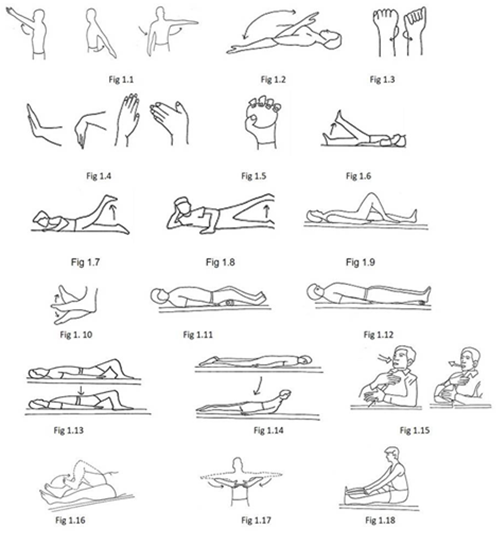 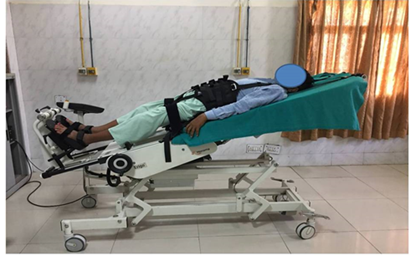 The quality of living was assessed in accordance SF-36 assessment tool [15]. This scale is a short form health survey patient self administered, multipurpose with 36 questions which measures generic health status in the general population and also used earlier in acute stroke patients [16]. Muscle strength was measured by MRC (Medical Research Council) classification of Manual Muscle Testing (MMT) [17]. The National Institutes of Health Stroke Scale (NIHSS) is an objective tool used by health care professionals quantify the stroke related impairment [18]. The cognitive impairment in stroke patients was quantified by using Mini-Mental State Examination (MMSE) which is a 30-point questionnaire [19]. The Modified Ashworth Scale is a 6-point rating scale that is used to measure muscle tone with ratings from 0 indicating no increase in tone to 5 indicating limb rigid in flexion or extension [20].

time. MS EXCEL (MS Office 97-2013) was used for the analysis. Probability (P) value between 0.05 (P <0.05) & 0.01 was considered statistically significant; Values are reported as mean ± standard deviation (SD) and for ordinal data as Median.

A total of 63 patients were assigned from Department of Neurology. Eight patients dropped out due to death, recurrent stroke or lost to follow up. Fifty-five patients had completed the study with mean age 50.8 ± 6.86 years. Patient demographic parameters are presented in Table 2. The graphical representation was shown in figure 3. Training was started on average 8.92 ± 6.49 days after the stroke. Repeated measures ANOVA within group comparison among the variable scores with time show that, the performance of the robotic tilt-table therapy group improved significantly (p<0.01) in all outcome variables i.e. Quality of life, upper/lower limb muscle strength, NIHSS, MMSE and Ashworthwith time (Table 2).

Table 2: Repeated measures ANOVA within Group comparison among the variable scores with time. 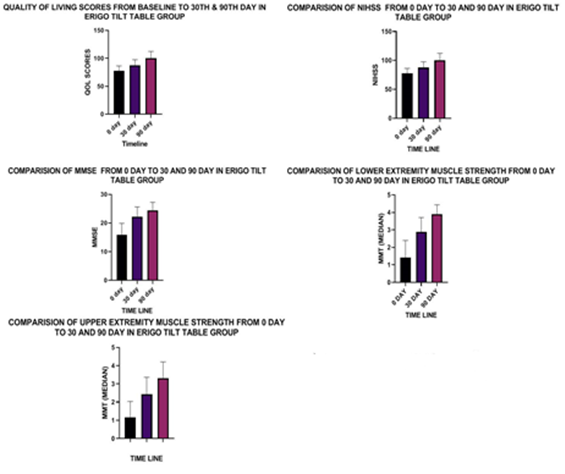 Figure 3: Graphical Representation of comparison between various variables with time.

The present study has provided more data supporting the remarkable benefits of robotic tilt table training and home rehabilitation program in post-stroke hemiplegic patients. This study revealed that with two months of home exercise program post one month robotic tilt table rehabilitation has been effective in gaining greater functional independence, Muscle strength, Mental status of the patient, Tone, ability, and quality of life in post stroke patients. The intervention appears to have accelerated recovery within three months compared to usual care. Rehabilitation begun early in the acute stage optimizes the patient’s potential for functional recovery. It was evident that the Robotic tilt table rehabilitation promotes motor activity by enhancing brain plasticity [21, 22]. The robotic tilt table verticalization promotes greater cerebral blood flow and supports the plastic changes within sensory-motor areas and vestibular system, with the consequent motor and cognitive function amelioration [23, 24]. In addition to improving orthostatic tolerance, it was also evident that the robotic tilt-table is an effective exercise tool to improve the aerobic fitness which could be decreased because of prolonged bed rest in patients with stroke and motor dysfunction. It also helps in initiating the rehabilitation process at the earliest possible time point after stroke and improves the aerobic fitness that reduced due to inactivity. It was also found that robotic tilt-table can be used to give a strong training stimulus to complement conventional physiotherapy practices and serve the dual purpose of increasing orthostatic tole-rance and attenuating the decline in aerobic fitness [25]. One of the findings also showed that extensor spasms reduced after tilt table standing [26]. Early Verticalization leads to increased cerebral blood flow which promotes cortical plasticity mostly in frontal lobes resulting in enhanced cognitive performances. [27].

Robotic verticalization is a promising tool that aids in improving ventilation, enhanced coherence and early arousal response, early weight-bearing of the lower limbs, and facilitation of antigravity exercise of the limbs [28]. Earlier it was found that using a supplementary tilt table, a progressive task-oriented training can improve the lower extremity muscle strength and spatiotemporal parameters of gait at an early stage of rehabilitation of subjects with stroke which is in line with our preliminary study [29]. The robot-assisted movement practice activates the motor cortex by a phenomenon known as "motor priming" and helps in learning complex motor activities needed for voluntary movements [30]. The cyclic rhythmic repetitive movements of robotic tilt table work as an external proprioceptive cue, by strengthening the neuronal circuits involved in limb movements. The cyclic external rhythm provided by Robot-assisted training could improve motor output bypassing the defective internal motor generation system [31]. The effectiveness of robotic tilt-table has already proved but the home exercise program after tilt-table intervention proves to be much more beneficial in the rehabilitation of stroke patients as it prevents the deterioration after hospital discharge and supports in sustaining the achieved improvement and help in further improvement of patients to gain most function and reduce dependency. Although the study found to be beneficial in many aspects but has several limitations. Most importantly, this study does not have any control group to combine our findings and help move our promising rehabilitation approach closer to clinical practice for a more reliable evaluation of the robotic tilt table. Other limitations are the lack of long duration follow-up and larger sample size trials, which can be answered in future studies.

Our study concludes that early rehabilitation through robotic tilt table followed by home exercise program during the first three-month period in patients with acute stroke provides a better outcome for improving function and reducing disability and the implementation of this program will certainly enhance stroke survivors’ recovery and quality of life.