Blunt carotid injury that occurs as a result of near-hanging or strangulation carries a significant morbidity as a result of subsequent ischaemic stroke. Clinical examination is poorly predictive in identifying patients with vascular injuries and imaging plays a central role in screening these patients in the emergency setting. We present the case of young woman who presented to the emergency department following near-hanging. CT angiogram examination of the neck demonstrated an enhancing focus at the carotid bifurcation which was initially misidentified as a carotid artery pseudoaneurysm. Ultrasound demonstrated absence of flow within the mass which was interpreted as thrombosis of the pseudoaneurysm. Following an unsuccessful attempt at embolisation, the imaging was reviewed and the correct diagnosis of a carotid body tumour reached. Differentials for an enhancing mass within the carotid space include a pseudoaneurysm, carotid body tumour, enhancing lymph node, schwannoma or neurofibroma. General radiologists should be aware of the imaging distinctions between these carotid space pathologies.

A 24-year-old woman was brought to the emergency department following a suicide attempt through hanging. She was cut down and two rescue breaths were administered. GCS was 15 at the scene. Due to agitation, she was sedated to facilitate transfer. A feint ligature mark was evident on the anterior neck. Arterial phase CT neck was performed to investigate for a vascular injury. An enhancing focus was seen adjacent to to the left carotid bulb. Delayed phase imaging was subsequently performed. 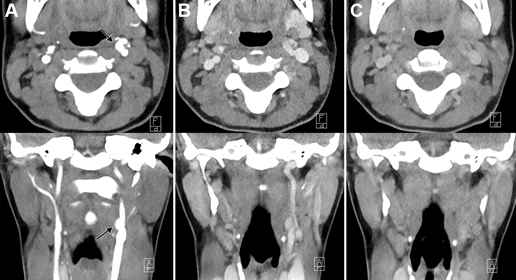 Figure 2: Ultrasound demonstrated an ill-defined abnormality posterior to the common carotid artery which was suspicious for a thrombosed pseudoaneurysm arising from the external carotid artery.

The patient was transferred to a tertiary centre for vascular surgery review and underwent angiogram to investigate the presumed traumatic carotid artery injury. 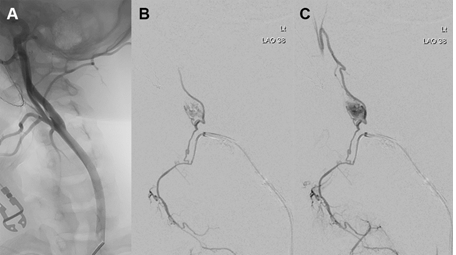 Figure 3: A: Left common carotid angiogram did not show a pseudoaneurysm. B, C: selective angiogram of the left external carotid artery demonstrated a mass arising from a branch of the superior thyroid artery. Unsuccessful attempts were made to coil the vessel before the procedure was abandoned.

Due to the small size of the tumour, MR imaging was non-contributory. 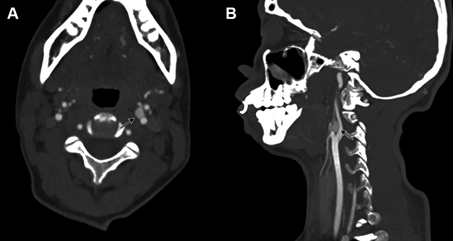 Figure 4: A (axial), B (sagittal). On review of the initial presentation CT, with appropriate windowing, the mass is seen to incompletely follow the arterial pool. The feeding branch arising from the superior thyroid artery is evident anterior to the mass.

Near-hanging and strangulation may result in arterial dissections, haematoma, stenosis or pseudoaneurysm formation involving the carotid or vertebral arteries. These injuries are poorly predicted based on examination alone, mandating a low-threshold for radiological evaluation in patients presenting following high-risk mechanisms. Arterial injury is not uncommon, occurring in 2% of non-fatal hangings [1]. Treatment is intended to minimise the risk of ischaemic stroke, which occurs in half of untreated patients with blunt carotid artery injuries. Where patients do become symptomatic following traumatic carotid artery injury, neurological defect was identified an average of 10-72 hours following patient presentation in one study. Anticoagulation remains the mainstay of therapy, however endovascular treatments are becoming increasingly commonplace in managing these injuries [2].

Arterial-phase CT is the most frequently performed investigation in the emergency setting. Sensitivity of CT in detecting blunt carotid injuries is reported between 82% and 100% when compared with the gold-standard conventional angiogram. Modern CT scanners with 16-64 channel technology demonstrate higher sensitivities and specificities, allowing the detecting of almost all clinically significant blunt vascular injuries [3, 4]. CT has the additional advantage of identifying associated injuries, and in particular cervical spine fractures, which occur more commonly than vascular injuries.

No direct comparison between the sensitivity of CT or ultrasound in the detection of traumatic vascular injuries have been reported. The portability of ultrasound means that it can be employed at the bedside to rapidly assess the unstable patient. The lack of need for intravenous contrast also provides an advantage in patients where contrast is contraindicated. Despite these advantages, interobserver variability and difficulty in visualising the entire vertebral arteries limits its use in the emergency setting [5]. Sensitivities between MRI and CT appear comparable but scanning time and availability currently make MRI impractical in screening unstable patients [4].

The differentials for an enhancing mass at the carotid bifurcation include a carotid body tumour, lymph node, schwannoma or neurofibroma arising from the lower four cranial nerves, carotid sheath meningioma and carotid pseudoaneurysm [6-8]. Enhancing lymph nodes should prompt consideration of thyroid malignancy or squamous cell carcinoma of the head or neck. Large lesions centred within the carotid space will displace the ipsilateral parapharyngeal fat anteromedially. Second brachial cleft cysts external to the carotid sheath may also have a similar location [6].

Carotid body tumours are rare, highly vascular neuroendocrine tumours that arise from the paraganglion cells of the carotid body. Incidence is estimated at 1-2 per 100,000 with presentation most common within the fifth and sixth decades, with a slight female predominance described [9]. The majority of tumours are asymptomatic, being diagnosed incidentally on imaging or presenting as a painless, rubbery masses in the lateral neck. Where symptomatic, patients may present with dysphagia, odynophagia or hoarseness of voice due to compression of the adjacent glossopharyngeal or vagus nerve [10]. Paragangliomas may be treated surgically or with radiation. Risk of vascular injury and nerve damage increases with tumour size and hence radiation therapy is typically reserved for extensive tumours where surgical would result in significant morbidity [11, 12]. As 10% of cases are malignant and aggressive lesions are poorly differentiated from benign lesions on imaging, long-term follow-up is mandated where resection is not performed.

When large, these tumours classically splay the internal and external carotid arteries. They display rapid enhancement on arterial phase CT [10]. On MRI, they classically demonstrate a 'salt and pepper' appearance on T1 with areas of punctate high intensity areas due to haemorrhage and low intensity areas due to flow voids [13, 14]. The lesions are usually higher signal than muscle on T2. Schwannomas and neurofibromas are generally slightly less avidly enhancing than paragangliomas. Schwannomas may demonstrate a target sign with high T2 signal peripherally and central hypointensity [6].

In this case, the site of the enhancing focus is typical of a carotid body tumour location. The mass did not completely match arterial phase enhancement on CT and the walls of both the internal and external artery appeared intact, without thrombus or other secondary features of traumatic injury. Additionally, the absence of internal vascularity on Doppler ultrasound mandates consideration of a solid lesion in addition to a thrombosed pseudoaneurysm. The majority of carotid body lesions are supplied by the ascending pharyngeal artery or via other branches of the external carotid artery and as such, the presence of a large vessel arising from the external carotid artery should also raise suspicion for a mass rather than a vascular injury [15].

This case also highlights the importance of appropriate windowing in vascular studies. An initial radiological diagnosis of a mass is likely to have prevented this patient from undergoing an unnecessary angiogram.