We present a case of a 38-year-old male with osseous Diffuse large B-cell lymphoma (DLBCL) involving bilateral femur, with secondary cardiac dissemination involving right atrium and pericardium extending into SVC. The article discusses the osseous involvement of lymphoma and emphasizes the presence of cardiac involvement in the extra nodal lymphoma which may cause secondary symptoms like SVC obstruction. Such cases carry poor prognosis and require treatment modification and careful monitoring to avoid cardiac complications after initiation of chemotherapy. Only few such cases have been described in literature so far.

Lymphoma is a common malignancy in elderly occurring in patients with mean age of 60 years. Most lymphomas in elderly are Non-Hodgkin’s type (NHL) with Diffuse Large B-Cell lymphoma (DLBCL) being the most common subtype. Osseous involvement of lymphoma is mainly seen as a part of multifocal nodal/ extra nodal disease and less commonly as a primary osseous lymphoma. Also, secondary cardiac involvement in lymphomas is not common and has been described in literature occurring in 8-20% of cases as per autopsy studies. Primary cardiac lymphoma is even rare accounting for only ~1.3 % of cardiac tumors. Cardiac lymphoma carries poor prognosis due to risk of post chemotherapy life threatening complications.

The patient presented to the OPD with chief complaint of progressive painless swelling around bilateral knee joints (right >left) since last two months. The patient also had history of fever and weight loss. There were no presenting cardiorespiratory symptoms. On clinical examination patient had firm nontender swelling above and around the right knee joint. Overlying skin was normal. Mild swelling was also seen around the left knee joint. Pulse rate was 90 per minute and BP was 120/70. Physical examination and laboratory tests were unremarkable.

3. Imaging and Histopathological Findings and Diagnosis

X--ray of bilateral knee joints and chest was performed. Chest Xray did not reveal any significant abnormality. The X-ray of right knee joint revealed an ill-defined permeative type of bony lesion in the distal femur with wide zone of transition (Figure 1). There was cortical thinning with associated soft tissue mass seen on both medial and lateral aspect with fullness of suprapatellar recess. No e/o matrix mineralization was seen. Xray left knee revealed subtle permeative lesion in the distal femur. Soft tissue shadows were unremarkable.

Further, contrast enhanced MRI of bilateral knees was performed which showed a soft tissue mass lesion in the right distal femur showing isointense to hypointense signal on T1WI (Figure 2) and heterogenous iso to hyperintense signal on STIR/T2WI (Figure 3) with erosion of medial cortex and a large extraosseous extension of soft tissue circumferentially around the femur with heterogenous post contrast enhancement (Figure 4). The left distal femur also showed a similar intramedullary soft tissue lesion with no extraosseous extension. Restricted diffusion was noted in the involved areas. Findings were consistent with a malignant lesion likely lymphoma however metastatic bone lesions were also a differential. The biopsy specimen was taken from the mass around right knee. Histopathological examination revealed a cellular tumor comprised of large lymphoid cells intermingled with small lymphocytes. The large lymphoid cells had irregular nuclear membrane, prominent nucleoli, and scanty pale eosinophilic cytoplasm (Figure 11 (a & b)). The cells showed frequent mitosis and increased apoptosis. They were immunoreactive for CD20, PAX5, CD79a which are B cell markers. The small lymphocytes were immunoreactive for CD3 (Figure 11 (c & d)). The findings were consistent with Diffuse large B cell lymphoma.

In view of multifocal bone lesions PET CT was performed. Apart from the lesions in both femur showing FDG uptake, it also revealed a FDG avid heterogenous enhancing mass lesion completely filling the right atrium lumen and extending into the SVC and left brachiocephalic vein causing their luminal occlusion and distension (Figure 7 & 8). The wall of the atrium could not be delineated from the mass. Diffuse pericardial thickening was also seen with focal FDG uptake in the pericardium along the left atrium (Figure 10). On the basis of above findings final diagnosis of extra nodal lymphoma involving bilateral femur with secondary involvement was made. 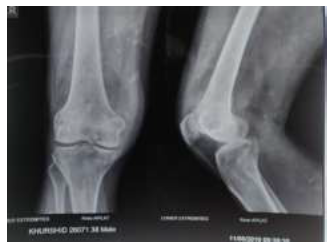 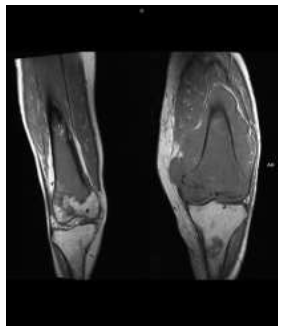 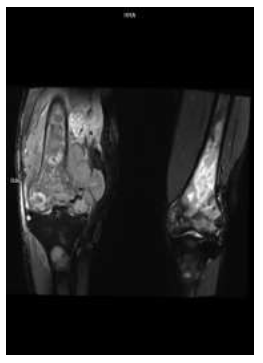 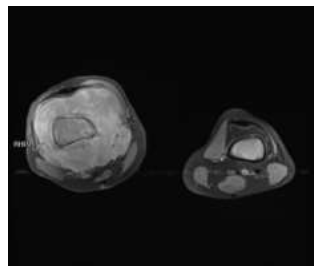 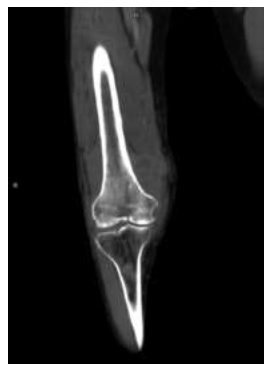 Figure 5: CORONAL CECT image of the right thigh and knee in soft tissue window shows that the lesion is causing permeative type of bone destruction in the distal femur with soft tissue component showing heterogenous enhancement. 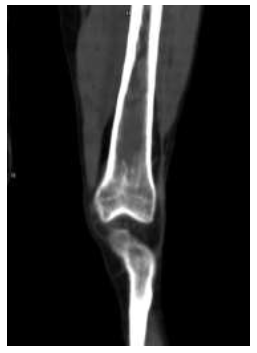 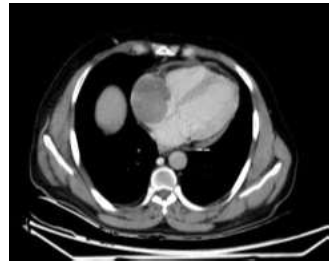 Figure 7: AXIAL CECT images of the chest shows another enhancing mass lesion in the right atrium displacing the interatrial septum mildly. There is diffuse pericardial thickening (--). 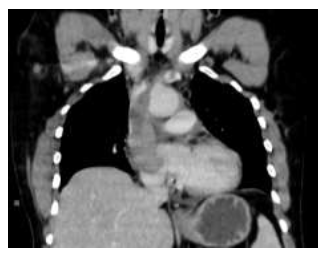 Figure 8: CORONAL CECT image of the chest shows the mass extending into the SVC and left brachiocephalic vein. 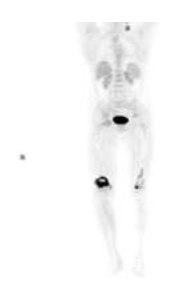 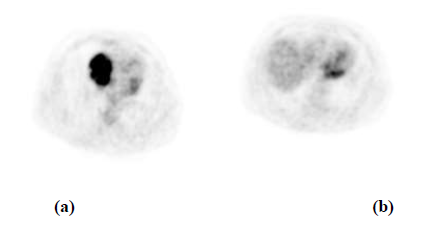 Figure 10: (a) AXIAL PET images reveal increased FDG uptake within the lesion in the right atrium and; (b) Pericardial region. 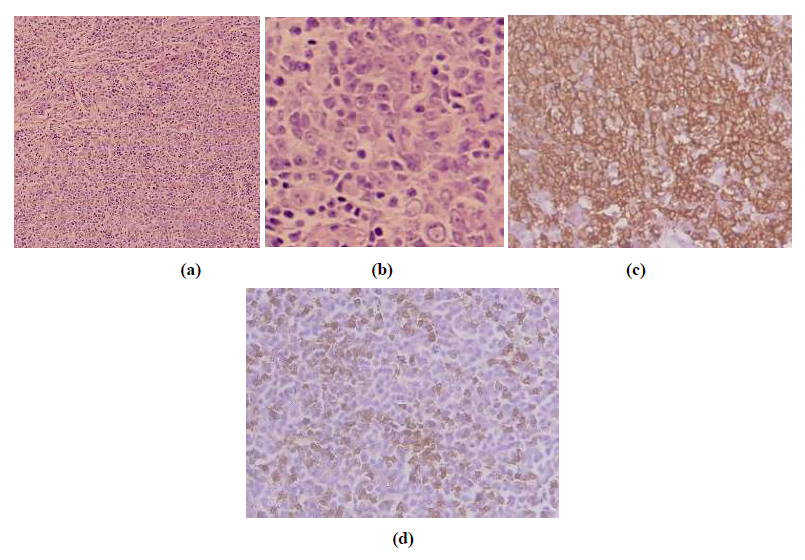 Lymphoma is a relatively common malignancy of all ages mostly occurring in adults and elderly and presents as large nodal or extra nodal masses. DLBCL is the most common histopathological subtypes of extra nodal lymphomas. Lymphoma of the bone constitutes ~7% of bone malignancies. Osseous lymphomas have been divided into four types [1]. A solitary Primary Bone Lymphoma (PBL) [2], multifocal PBL without soft tissue or nodal involvement [3], simultaneous osseous and nodal/soft tissue involvement, and [4] osseous involvement presenting more than 6 months after confirmed diagnosis of lymphoma [2]. PBL has been described as solitary or multifocal osseous involvement in absence of distant nodal/ extra nodal disease within 6 months of diagnosis. PBL tends to involve the appendicular skeleton whereas secondary lymphomas more commonly involve vertebrae, skull, and pelvis. Solitary or multifocal PBL have a predilection for bones around knee joints including femur and tibia. The site of involvement in long bones includes meta diaphyseal region in most cases, however localized involvement of epiphysis and diaphysis alone may also be seen. On radiographic imaging, bone lymphomas usually appear as ill-defined lesions with permeative or moth-eaten type of bone destruction. The pattern maybe lytic, mixed lytic and sclerotic or purely sclerotic. They show wide zone of transition and are usually associated with soft tissue masses. They can cause cortical erosion and pathological fractures. They also have the tendency to cross the joints and involve adjoining bones and soft tissues. Sometimes the lesions can be subtle on radiographs and the involved bone may appear as near normal. MRI helps in assessment of marrow involvement and also soft tissue extension. It also serves as imaging for further assessment of lesions which are subtle or indefinite on radiographs and also helps to identify multifocal lesions which can be missed on plain radiographs.

CT has a limited role and mainly aids in identifying bony erosions, pathological fractures, matrix mineralization and characterize periosteal reaction. The imaging patterns of osseous lymphoma are however not specific and has multiple mimics including metastasis, chronic osteomyelitis, osteosarcoma, and Ewing’s sarcoma. When present in axial skeleton the differential diagnosis of multiple myeloma and metastasis needs to be considered especially in elderly patients with multifocal involvement. Lymphomas of bones carry good prognosis and 5-year survival rate as high as ~80% has been described [4]. The treatment mainstay is chemo and radiotherapy.

Cardiac lymphoma is also most commonly seen as secondary involvement in disseminated lymphoma and is seen in approximately 30% cases of disseminated lymphoma [3]. Clinical presentation of patient with cardiac involvement may be varied like dyspnea, chest pain, cardiac failure, arrhythmias, thromboembolism and hemodynamic disturbances due to mass effect/valve involvement. Most commonly patient with cardiac masses present with cardiac failure, followed by tumor thromboembolism. Few studies have also reported patients presenting with cardiac ischemia and raised troponin levels due to myocardial infiltration by lymphoma [5]. Due to advancement of imaging techniques and early detections sometimes the findings are incidental without any initial symptoms as seen in this case [4]. Imaging modalities used for evaluation of cardiac masses include echocardiography, CT, and Contrast-Enhanced MRI. Echocardiography is non-invasive first imaging of choice for evaluation of suspected cardiac lesions. It allows localization of mass and assessment of related cardiac functional abnormalities at the same time. Transesophageal echocardiography (TEE) provides better visualization window as compared to transthoracic echocardiography. TEE has sensitivity of almost 100 % in detection of cardiac masses.

CT has excellent spatial resolution and allows characterization of the mass and its anatomical relations. it however has low soft tissue contrast and therefore has limited evaluation of myocardium and epicardium. Cardiac MRI is the preferred modality for cardiac mass assessment since it provides better soft tissue contrast without contrast administration and allows functional as well viability evaluation.

Most cardiac lymphomas, ~80% are DLBCL types. They mainly present as single or multiple infiltrating masses involving myocardium and epicardium. Pericardial thickening and effusion are also common findings. Hemopericardium can also occur in some cases. Right sided cardiac involvement is more as compared to left, right atrium being the commonest site [6, 7]. SVC involvement is also seen in many cases causing SVC obstruction. There may be encasement of coronary vessels in the epicardium. Involvement of the atrioventricular septal walls is also seen Few cases reports have also documented diffuse cardiac involvement of lymphoma seen as multiple diffuse epicardial and myocardial lymphomatous deposits, diffuse pericardial thickening and pericardial effusion causing cardiac failure [8].

On CT cardiac lymphomas appear as iso-hypoattenuating infiltrating masses with involvement of the epicardium. The enhancement is mostly heterogenous. On MRI lymphomas are hypointense on T1WI and hyperintense on T2WI. CE imaging shows heterogenous enhancement within the mass. Delayed CE images also depict the extent of mass and myocardial viability. CE MRI also helps to distinguish between tumor and bland thrombus. The differential diagnosis considerations of cardiac lymphoma include metastasis, myxomas, thrombus and sarcomas. Most common cardiac malignancy is metastasis commonly occurring from lung carcinoma, breast carcinoma or malignant melanoma [9]. It may be direct extension of tumor mass or hematogenous deposits from the primary malignancy. Most common primary sarcoma of heart is angiosarcoma. As compared to lymphoma the sarcomas are more aggressive and appear as necrotic masses with heterogenous enhancement pattern on contrast enhanced CT and MRI. Invasion into the surrounding structures including cardiac valves and vessels is more commonly seen in sarcomas.

Cardiac involvement in lymphoma carries poor prognosis and median survival of patient is approximately 3 months [11]. Chemotherapy is the mainstay of treatment while the other modalities include radiotherapy and palliative surgical resection. The advent of chemotherapy has led to prolongation of survival time [11]. The current treatment guidelines for DLBCL include chemotherapy with CHOP regime (Cyclophosphamide, doxorubicin, vincristine, and prednisone) along with rituximab [1, 10].

Declaration of Conflict of Interest

I hereby declare that there is no issue of conflict of interest associated with this publication.