Primary hypoparathyroidism is a rare endocrine condition characterised by an abnormally low level of parathyroid hormone (PTH) which has significant effects on calcium metabolism, homeostasis and can have a wide range of clinical manifestations. We report a case of a 43-year-old female who was referred to our emergency department following a witnessed generalised tonic-clonic seizure lasting seven minutes. Blood tests and investigations confirmed a diagnosis of primary hypoparathyroidism. Computed tomography (CT) imaging of the brain revealed rare findings of diffuse bilateral intracranial calcifications affecting the cerebellum, brainstem, basal ganglia, internal capsule and numerous other cortical areas.

In an unenhanced CT scan of the brain, hyperdense areas represent either calcium or acute hemorrhagic extravasation. There are numerous causes of intracranial calcification, many of which are non-pathological. In a non-contrast enhanced CT scan of the brain, areas where physiological calcification is commonly seen include: the pineal gland, habenula, basal ganglia, the choroid plexus and dural coverings including those that constitute the falx cerebri and tentorium cerebelli. In a contrast enhanced scan, vascular structures including the venous sinuses and the pituitary gland also appear hyperdense due to the radiodense property of iodine. The differential diagnoses of pathological intracranial calcifications are vast. Primary hypoparathyroidism is a recognised metabolic causes of intracranial calcification. There have been a few documented cases of this phenomenon in the literature [1-3].

A 43-year-old female patient was initially referred to our emergency department in April 2018 after experiencing a seven minute generalised tonic-clonic seizure in the community. She was initially brought into our resuscitation department and given several doses of anticonvulsant medication in order to terminate the seizure. On initial assessment after the seizure terminated, she was in the post-ictal phase but had no other focal neurological signs or sequelae. She had no significant medical or surgical history of note except community management for vitamin D deficiency with oral calcium and vitamin D supplementation.

Blood tests including arterial blood gas (ABG), full blood count, renal function tests, liver function tests, creatine kinase and inflammatory markers were taken in the first instance. These were largely unrevealing aside from a raised lactate (8 mmol/L; normal <1.5 mmol/L) on the ABG which was expected secondary to rhabdomyolysis as a consequence of muscle contraction during the seizure. As part of on-going assessment, bone profile tests were requested, in addition to computed tomography (CT) imaging in order to exclude an organic intracranial pathology. Bone profile biochemical tests revealed severe hypocalcaemia (1.34 mmol/L; normal 2.15-2.61 mmol/L) and hyperphosphataemia (1.65 mmol/L; normal 0.74-1.52 mmol/L). These results, in addition to an undetectable parathyroid hormone level (C < 0.4 pmol/L; normal 1.4-6.4 pmol/L) and a normal 25-hydroxyvitamin D level of 67 nmol/L, were in-keeping with a diagnosis of primary hypoparathyroidism. An unenhanced CT examination of the brain by a 64-slice CT scanner was performed. The protocol included a non-contrast CT scan with a 4mm slice thickness. As demonstrated in Figure 1, dense bilateral intracranial calcification was demonstrated involving the cerebellum (A), the brain stem (B), the basal ganglia and internal capsule (C) and numerous other cortical areas (D). There were no other focal cerebral or extra-axial abnormalities noted. She was treated aggressively with intravenous calcium replacement and was subsequently referred to an endocrinologist.

This patient was re-referred to our department for a follow-up CT scan of the brain in January 2019 following a one-week history of new onset muscle stiffness, abnormal gait and mild tremor. On this admission, biochemistry remained consistent with the initial diagnosis revealing hypocalcaemia (1.31 mmol/L, normal 2.15-2.61 mmol/L) and a worsening hyperphosphataemia (2.03 mmol/L, normal 0.74-1.52 mmol/L). As demonstrated in Figure 2 below, there was no significant interval change in the intracranial calcifications as compared to the CT examination from April 2018. 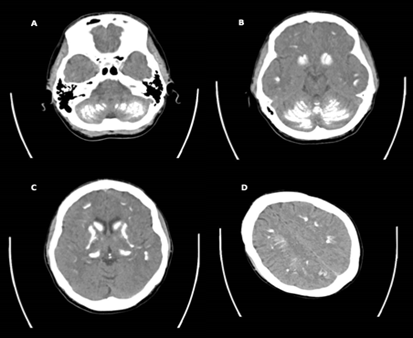 Figure 1: Non-contrast computed tomography scan (reported in April 2018) of the brain illustrating the distribution of dense calcification including the cerebellum, brainstem, basal ganglia nuclei, the internal tract and other cortical areas. 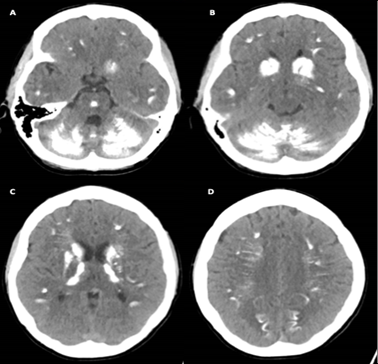 Figure 2: Non-contrast computed tomography scan (reported in January 2019) of the brain illustrating the distribution of dense calcification including the cerebellum, brainstem, basal ganglia nuclei, the internal tract and other cortical areas

The most common metabolic cause is pseudohypoparathyroidism, followed closely by hypoparathyroidism. Whilst the exact mechanism of calcification in both of these conditions isn’t fully understood, it is thought that chronic hyperphosphataemia plays a significant role in promoting ectopic cerebral calcification via elevated levels of calcium-phosphorus product [8]. In such metabolic diseases, the distribution of calcification is often diffuse and bilateral, with the most commonly affected sites including the lentiform and caudate nuclei of the basal ganglia [9]. One notable facet of this case is that despite minimal change in the biochemical corrected calcium level between these two presentations that were nine months apart; there was a notable difference in the severity of the presenting symptoms. When the patient initially presented following a seizure; she was noted to have a serum calcium of 1.34 mmol/L. During her second presentation with symptoms that were less severe including muscle stiffness and gait disturbance, the corrected calcium was found to be 1.31 mmol/L. This suggests that the severity of biochemical hypocalcaemia does not necessarily correlate with the severity of the clinical symptoms of hypocalcaemia. This also highlights the challenges of long-term management of primary hypoparathyroidism. Despite the reported evolution of new symptoms over the nine-month period separating both presentations, there was no significant interval changes reported in the distribution or density of the intracranial calcification noted on the CT scans of the brain.

It can therefore be surmised that an individual patient’s clinical sequelae is independent to the density of the intracranial calcification and more related to the biochemical hypocalcaemia itself. Intravenous calcium replacement is the mainstay of treatment in patients with severe symptomatic hypocalcaemia. Mild hypocalcaemia is often treated with oral calcium supplementation whilst specific secondary causes of hypocalcaemia are managed according to aetiology e.g. supplementation with alfacalcidol in patients with chronic kidney disease. The ultimate goal is to achieve symptom control and to avoid life-threatening complications of hypocalcaemia e.g. seizures, tetany and fatal arrhythmias.

We have no conflicts of interests to declare in writing this case report.