Neutrophil Extracellular Trap Formation (NETosis) facilitates thrombosis and contributes to reperfusion resistance - a major challenge encountered during the treatment of acute ischemic stroke. The effect of acute stroke on plasma NETosis biomarkers remains unclear. In this study, young adult C57BL/6 Wildtype (WT) mice were subjected to acute brain Ischemia-Reperfusion (IR) injury. The IR-subjected mice exhibited a drastic increase in plasma citrullinated histone 3 (CitH3) and Neutrophil Elastase (NE) on day 1 (p<0.05) while Deoxyribonucleic Acid (DNA) and Myeloperoxidase (MPO) reached their peak levels on day 3. IR-subjected mice also showed a significant increase in peripheral neutrophils and decline in peripheral leukocytes, lymphocytes, and monocytes on day 1 and day 2 (p<0.05). The ratios of neutrophil to lymphocyte, neutrophil to leukocyte, and lymphocyte to monocyte dramatically increased on day 1 (p<0.05). Plasma NE, CitH3 and MPO were positively correlated with peripheral neutrophil and the ratio of neutrophil to lymphocyte, but inversely correlated with peripheral lymphocyte (p<0.05). Our data suggest that there are time dependent changes in plasma NETosis biomarkers, reducing these biomarkers before their peak may offer potential therapeutic options to reduce cerebral infarction and prevent functional deterioration after acute ischemic stroke.

Stroke is the fifth leading cause of death and the leading cause of serious long-term disability in the United States [1]. One component of stroke pathogenesis is a robust inflammatory response and a trafficking of peripheral immune cells into the ischemic brain post -stroke [2]. Of these peripheral immune cells, neutrophils are the first group to infiltrate ischemic tissue. In the process, neutrophils form and release Neutrophil Extracellular Traps (NETs), web-like DNA structures containing histones and cytotoxic proteins, into the brain parenchyma and within cerebral microvasculature [3-6]. Increasing evidence suggests that NETosis (NET formation) facilitates thrombosis and contributes to reperfusion resistance, a major obstacle encountered during the thrombolytic treatment of Acute Ischemic Stroke (AIS) [7, 8]. In fact, plasma Deoxyribonucleic Acid (DNA), a known marker for NETosis, has been used to predict the mortality and morbidity of patients suffering from acute stroke [8-11]. Thus, approaches to minimize or prevent NETosis may have pro-thrombolytic potential in the treatment of AIS and Acute Myocardial Infarction (AMI) [12-18]. Activated neutrophils release nuclear and granular contents to form NETs comprising of DNA and histones, along with associated neutrophil granule proteins, such as Myeloperoxidase (MPO), Neutrophil Elastase (NE), and peptidyl arginine deiminase type IV (PAD4). When activated by calcium binding, PAD4 deiminates histones inside the nucleus of neutrophils, catalyzing the conversion of positively-charged histone H3 arginine into neutral citrulline. Histone citrullination causes the histones to decondense and promote a rapid version of NET formation that is independent of NADPH oxidase (NOX) and is instead dependent on calcium influx. Histone Citrullination (CitH3) is considered the hallmark of calcium-mediated NOX-independent NETosis. On the other hand, NOX-derived reactive oxygen species (ROS) create an optimal environment for the generation of NE and MPO, two factors that are critical components of NETosis. Both NE and MPO are stored in the primary granules of naïve neutrophils and synergize to promote histone decondensation. Although cell-free DNA does not originate exclusively from activated neutrophils, it is an appealing and acceptable NETosis biomarker and has been used as a surrogate given its reliable, simple, and high-throughput ascertainment.

Wildtype (WT) C57BL/6 mice were purchased from the Jackson Laboratory (Bar Harbor, ME). All experiments involving animals were performed following the protocols in accordance with the Revised Guide for the Care and Use of Laboratory Animals and were approved by the Institutional Animal Care and Use Committee (IACUC) of the Barrow Neurological Institute. The study was carried out in compliance with the ARRIVE guidelines. All methods were performed in accordance with the relevant guidelines and regulations.

Adult male mice (aged 12 weeks) were exposed to middle cerebral artery occlusion (MCAO) using an intraluminal filament method as described previously [30]. All surgical manipulations were performed under aseptic conditions. Briefly, mice were anesthetized with 3% isoflurane followed by maintenance with 1.5% isoflurane. Mice were placed in the supine position on a heating pad, and the body temperature was monitored using the small animal anesthesia system (Kent Scientific Cor. FL, USA). Under a stereo dissecting microscope (AmScope, CA, USA), the right Common Carotid Artery (CCA), External Carotid Artery (ECA), and Internal Carotid Artery (ICA) were exposed and isolated. To induce MCAO, a nylon monofilament coated with silicon (Doccol, MA, USA) was introduced into the internal carotid artery through the external carotid artery, then further advanced to the origin of MCA. Successful MCAO was confirmed by >80% decrease in cerebral blood flow monitored by laser doppler flowmeter (MoorVMS-LDF2, Moor Instruments, UK).The incision was sutured, and the mouse was put into a portable animal intensive unit (ThermoCare, CT, USA) to recover from anesthesia. Mice were re-anesthetized and the filament was withdrawn for reperfusion at 60 minutes of MCAO (Ischemia-Reperfusion, IR). The incision was re-sutured, and the mouse was put into a portable animal intensive unit to recover then transferred to the home cage.

One-way ANOVA with post-hoc Tukey’s test was applied in GraphPad Prism version 9.1 for the data from multiple groups. Pearson’s correlation analysis was used for the relationship between NETosis biomarkers and all parameters of whole blood cell count and the ratios of neutrophils, lymphocytes, and platelets. All data are presented as mean ± SEM. Statistical significance was defined as p < 0.05 for all analyses. 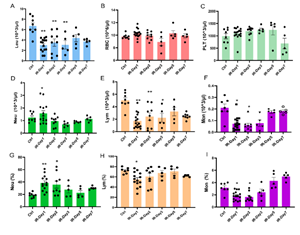 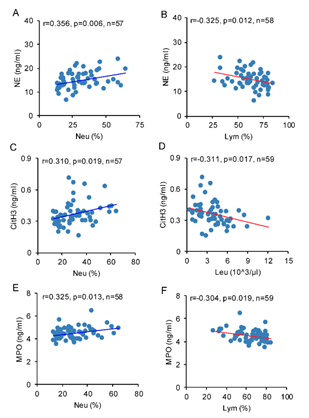 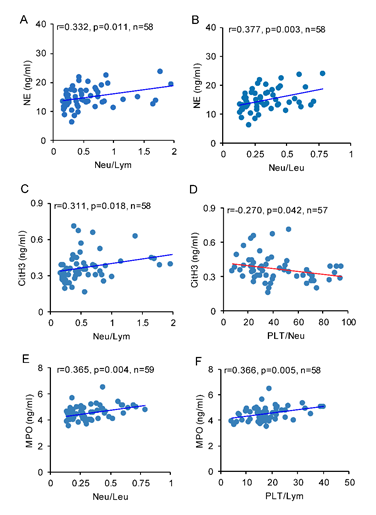 Ischemic stroke is a major public health disease with high cost, social burden, and incidence worldwide. Intravenous tissue plasminogen activator and endovascular mechanical thrombectomy are the only FDA approved treatments for AIS, and there remains a large subset of stroke survivors suffering from profound long-term impairment and poor prognosis. Reperfusion resistance exacerbated by impaired microvascular perfusion continues to be a major challenge encountered with thrombolytic treatment of AIS [7, 8]. Recent evidence suggests that NETosis facilitates thrombosis and increases reperfusion resistance [7]. Moreover, prevention of NETosis is reported to have pro-thrombolytic potential in the treatment of AIS [12-18]. Details regarding the precise evolution of various post stroke NETosis biomarkers and their implication and potential effect on cerebral infarct expansion and aggravation of functional deficits are still not fully understood. In cerebral ischemia, neutrophils are the first group of cells to infiltrate the damaged tissue and undergo NETosis in the brain parenchyma and microvasculature [3-6]. In this study, the time course of NETosis biomarkers in mouse plasma is reported. The data show that four NETosis plasma biomarkers (CitH3, NE, dsDNA, and MPO) increased after stroke. CitH3 and NE reached their respective peaks at 24 hours while dsDNA and MPO peaked at 3 days. All plasma NETosis biomarkers levels exhibited resolution from peak during our seven day timeline reaching their respective baselines by day 5 post stroke. A previous mouse study reported that the level of CitH3 protein in brain tissue reached its peak around 3 to 5 days after stroke [21]. The delayed peak of CitH3 observed in the previous study could be due to the fact that it employed a distal MCAO model that results in smaller infarction and lower severity of BBB impairment. Moreover, there may be an interval between neutrophils infarct infiltration and their ongoing NETosis and CitH3 release in brain. However, such a relationship between NETosis biomarker peaks in peripheral blood and brain parenchyma remains to be tested. Previous human data showed that the maximum lesion volume was reached at day 3 after stroke onset, plateaued at day 4, and then slowly decreased starting on day 5 [22]. This human data along with our and others’ preclinical data suggests that the detection and tracking of plasma NETosis biomarkers may be a promising strategy for optimizing NETosis –based therapies aimed at mitigating cerebral infarction progression.

NE and MPO are both released from neutrophils and can facilitate histone decondensation and exacerbate NETosis. A recent study reported that a neutrophil elastase inhibitor (Agaphelin) exhibited a neuroprotective effect by reducing infarct volume, improving neurological function and decreasing mortality following ischemic stroke in mice [23]. The antithrombotic effects, promotion of brain tissue survival, and inhibition of thromboinflammation identifies neutrophil elastase inhibitors as another potential treatment option for ischemic stroke. MPO plasma concentration in patients suffering from acute cerebral ischemia has also shown positive correlation with stroke severity and worse outcome [24]. Our study, along with this additional data suggests potential strategies for early intervention of NETosis with efficacy monitoring via plasma NET biomarkers consequently resulting in better outcomes after AIS. Evidence shows that neutrophil counts increase after AIS and higher circulating neutrophil counts are independently associated with higher mortality rates and worse outcomes in patients with AIS [20, 21, 24]. However, it is not fully understood how the profiles of peripheral blood cells change with time after stroke. To address these key questions, whole blood cell counts were assessed at multiple time points after ischemia-reperfusion in this study. It was found that neutrophils dramatically increased while leukocytes, lymphocytes, and monocytes significantly decreased on day 1 and day 2 after AIS. Our finding is further supported by another MCAO study in which an increase in leukocyte levels was observed within 15 minutes of reperfusion and the levels decreased significantly at 24-hours post-reperfusion[25]. Interestingly, human patients are presented with higher leukocytes at the time of admission and these levels remain elevated for at least the first 24-hours after AIS [20]. This discrepancy in leukocytes level between the preclinical models and clinical observation at 24-hours is possible because of the percentage of neutrophils in peripheral WBCs, generally 20-30% in mice [26] and 50-70% in humans. Therapeutic interventions, such as tPA or endovascular thrombectomy, may also modify leukocyte profiles in the first 24-hours post-stroke [20, 27]. However, a comprehensive study is required to fully understand the discrepancies found in human and preclinical stroke studies. In our study, the data show that peripheral blood cell profiles gradually returned to their basal level by day 7 post stroke. Interestingly, the correlation analysis showed a significant, positive relationship between the concentrations of CitH3, NE, and MPO in mice plasma and neutrophil counts, while a significant inverse correlation was observed between the concentrations of plasma NETosis biomarkers (NE, CitH3, and MPO) with leukocyte and lymphocyte counts. This data suggest that higher plasma CitH3, NE, and MPO may be positively associated with worse outcomes in mice; however, further investigation is needed to confirm this hypothesis and its clinical implication.

This research was funded by a grant from the Barrow Neurological Foundation.

The authors declare no conflict of interest. The funders had no role in the design of the study; in the collection, analyses, or interpretation of data; in the writing of the manuscript, or in the decision to publish the results.