Objective: To find the effectiveness of Functional electrical stimulation on improving erectile function in Post-stroke patients.

Methods: It is a single - blinded randomized controlled trail, 486 hemiplegic patients from a 1st stroke admitted into the Hospital were screened for the study of whom 180 patients full filled the inclusion criteria and were randomly divided into two groups. 120 patients completed the study. Functional electrical stimulation group was given functional electrical stimulation, for a period of 4 weeks with 4 sessions per week with 15 min each session. After the intervention, the patients were trained for pelvic floor and home exercises. Conventional Physiotherapy group was given pelvic floor and home exercises. The erectile dysfunction was measured by International Index of Erectile Function and erectile function was measured by erectile hardness.

Conclusion: We conclude from this study that Functional electrical stimulation improves erectile function in stroke survivors and is a treatment of choice for erectile dysfunction in post-stroke patients.

Stroke is a medical emergency characterized by the WHO as “rapidly developed clinical signs of focal (or global) disturbance of cerebral function, lasting more than 24 hours or leading to death, with no clear cause other than of vascular origin”. Stroke is the 3rd leading cause of death and one of the major causes of long-term disability. Sexual dysfunction is a disability arising post-stroke which is not often addressed and greatly influences the quality of living among stroke survivors as well as their partners in a negative way [1]. Stroke often leads to decrease in physical ability that might affect sexual health in a negative way [2]. Sexuality ease is one of the most complex aspects of human life with myriad physiological and psychological influence [3-5], The common sexual dysfunction amongst stroke survivors often observed is decreased libido, impaired erectile and ejaculatory functions decreased vaginal lubrication, impaired ego, self-esteem, and depression [6]. The sexuality in stroke patients is affected by the motor, sensory, cognitive and physiological factors that are resulting from stroke and affect the desire and ability to engage in sexual activities in many ways [7]. Male sexual dysfunction is defined as a physical or psychological condition preventing a man from achieving sexual satisfaction and encompasses erectile dysfunction (ED), premature ejaculation, loss of libido, and hypogonadism [8]. The process of sexual activity for men, including male sexual arousal, penis erection, penis inserting into vagina, ejaculation, is called sexual dysfunction [9]. Sexual dysfunction is a change in a phase of the sexual activity that can result in frustration, pain, leading to reduction in the number of sexual intercourses [10].

1.1 Objective of the study

To find the effectiveness of Functional electrical stimulation on improving erectile function in Post-stroke patients.

The study was conducted at Lalita Super specialty Hospitals, Guntur, Andhra Pradesh, India during 2016-17 for a period of 1 year. It is a single - blinded randomized clinical controlled trail, (the subjects of the study are blinded). A total of 486 hemiplegic patients from a 1st stroke admitted into the Hospital were screened for the study of whom 180 patients full filled the inclusion criteria and agreed to join the study as subjects. They were randomly divided into two groups Functional electrical stimulation group (FES) experimental and Conventional physiotherapy group (CP) control group. At follow up 120 patients completed the study and were analyzed for statistical significance. Patients had to satisfy the following inclusion criteria for this study

The patients were explained about the study and took prior consent before enrolling them into the study. The patients are randomly assigned into two groups after satisfying the inclusion criteria, Functional Electrical Stimulation Group (Experimental) (n=60) and Conventional Physiotherapy group (control) (n=60). (Figure 1) 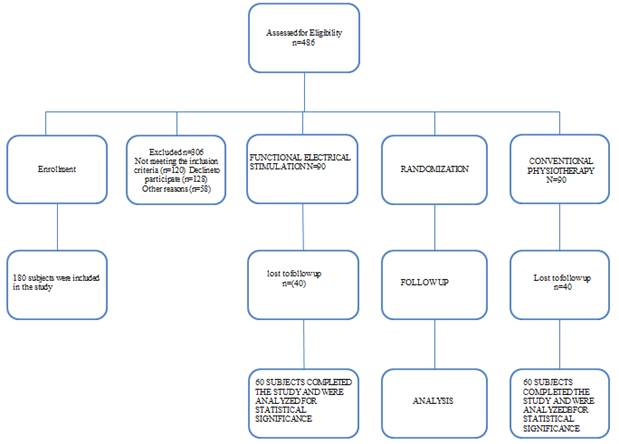 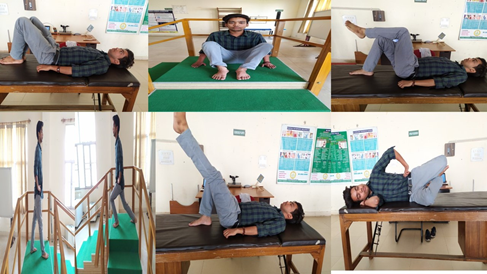 The erectile dysfunction was measured by International Index of Erectile Function (IIEF). The Domain A of this score was taken which measures the erectile function of patients. Domain A has 6 questions, with scoring from 0-5 for each question, thus making a total score 30. A score less than 14 is considered as having erectile dysfunction. The more the score the better is the Erectile function in Patients. The erectile function was also measured by Erection Hardness score (EHS) which is a single-item Likert Scale which measures the rate of hardness of erection in males. The scores are between 0-5, where 0 represents penis does not enlarge and 4 is penis is completely hard and fully rigid.

In this study to analyze the role of Functional electrical stimulation on erectile dysfunction in stroke patients, The pre - training outcome variables of age, time since onset of stroke, Diagnosis (Ischemic or Hemorrhagic), side of hemiplegia were compared using Mann Whitney U test. ( Table-1). All Pre intervention and post intervention scores of IIEF and EHS were expressed as Mean +/- Standard deviation (SD) and was statistically analyzed using paired t test within the groups and unpaired t-test to determine statistical difference among the groups at 5 % level of significance. To explore the practical significance of group differences, the effect size was calculated. The established criteria of the ES, which reflects the effect of treatment within a population of interest, are small (<0.41), medium (0.41 to 0.7), or large (> 0.70) [15].

There was no clinically relevant difference for age, Diagnosis, Side of Hemiplegia, Time since the onset of stroke which was analyzed by Mann Whitney U test. (Table 1).

*Mean & SD; The variables were analyzed using Man-Whitney “U” test

The variables are tested for statistical significance by paired ‘t’ and independent ‘t’ test.

We conclude from this study that Functional electrical stimulation improves erectile function in stroke survivors and is a treatment of choice for erectile dysfunction in post-stroke patients.

All procedures performed in studies involving human participants were in accordance with the ethical standards of the Lalita superspecialities Hospital Ethics committee Ref.no:ECR/439/Inst/AP/2013/RR-16 and with the 1964 Helsinki declaration and its later amendments or comparable ethical standards.

We would like to express our gratitude to the management of Lalitha Super specialty Hospitals, Guntur who permitted to conduct the study and special thanks to the staff members of the hospital, for their guidance and timely help throughout the project. We would also like to thank all the subjects who participated in this study, without them this project would not have been successful.

The authors declare no conflicts of Interest.

The study was not funded by any organization.