Puberty is a critical risk period for eating disorders, especially in girls. Previous reports showed that the association between puberty and eating disorders is mainly due to genetic factors, but the nature of these factors is unclear. To identify these genetic factors, we carried out exome analysis in 10 girls with anorexia nervosa compared to 10 unaffected women controls and identified low-frequency variants in genes among a list of 185 puberty-associated genes. After filtering data, 9 controls and 9 affected girls had at least one potential pathogenic rare (PPR) variant. In controls, 35 PPR variants were identified located (in 31 genes) whereas 52 PPR variants (in 38 genes) were identified in patients with AN. Among the genes identified only in the AN patients, we found a significant enrichment as compared to the general population and the control sample, in variants previously identified as associated with age at menarche (TNRC6A, LAMB2 and FAAH2). Two AN patients presented at least one rare missense variant in these genes. Moreover, nine patients with AN carried out missense/frameshift variants in puberty-associated genes previously identified by GWAS studies. Our results suggest that rare variants in genes involved in the timing of puberty such as TNRC6A, LAMB2 and FAAH2 may predispose to anorexia nervosa susceptibility during puberty.

Puberty is the maturational process of the reproductive endocrine system that results in adult height and body proportion, in addition to the capacity to reproduce. The time of human puberty is highly variable, and sexually dimorphic. Known influences on the timing of this event in mammals include the light/dark cycle, lept in levels, and the increased expression of neurokinin B, kisspeptin, and their receptors, NK3R and KISS1R [1-3]. Moreover, over 20 genes carrying rare pathogenic variants have been identified in pubertal disorders, many of them encode critical components of the hypothalamic-pituitary-gonadal (HPG) axis [4]. Recent genome-wide association studies (GWAS) have also identified more than 100 candidate genes at loci associated with age at menarche (AAM) or voice breaking in males [5, 6].

To better identify these genetic factors predisposing to eating disorders, we carried out an exome analysis in 10 girls with anorexia nervosa and in 10 unaffected women as controls, and searched for low-frequency variants among a list of 185 puberty-associated genes.

Patients with AN were recruited at the Clinique des Maladies Mentales et de l’Encéphale (CMME) (Hôpital Sainte-Anne, Paris, France). Diagnosis was made according to Diagnostic and Statistical Manual of Mental Disorders 5 (DSM5) scores. Individuals that consented to participation in the study had blood drawn for the collection of DNA and received a diagnostic interview administered by a trained research team member. Consensus diagnosis was obtained by agreement of clinicians specializing in AN. Eight individuals were considered as having a restrictive-subtype anorexia nervosa and two with the bulimia subtype. Three of these eating disorders (ED) patients are prepubertal at the time of the examination. Exclusion criteria included other types of ED than AN, confounding psychiatric diagnoses, for example, psychotic disorders, medical or neurological conditions causing weight loss. This cohort of patients consisted of 10 female individuals (13 to 47 years-old). Control group consists of 10 unaffected women. These controls were used to determine the frequency of rare variant in the different candidate genes.

All individuals provided a signed informed written consent. Peripheral blood samples were collected from patients and controls in EDTA tubes. Genomic DNA was extracted from blood samples by a standard procedure using the Maxwell system (Promega, Madison, WI, USA) and the LEV DNA BLOOD AS 1290 kit (Promega, Madison, WI, USA). Whole exome capture, next-generation sequencing and data analysis were carried out by Cochin Institute and Paris Descartes Platform, respectively. Briefly, libraries were prepared from 3 μg genomic DNA extracted from whole blood using an optimized SureSelect Human Exome kit (Agilent) following the manufacturer's instructions. Captured, purified and clonally amplified libraries targeting the exome were then sequenced on a Nextseq 500 instrument (Illumina) according to the manufacturer's recommendations. Obtained sequence reads were aligned to the human genome (hg19) using BWA software. Downstream processing was carried out with the Genome analysis toolkit (GATK), SAMtools and Picard Tools (http://picard.sourceforge.net). Single-nucleotide variants and indels were subsequently called by the SAMtools suite (mpileup, bcftools, vcfutil). All calls with a read coverage ≤20× and a Phred-scaled SNP quality of ≤20 were filtered out. We only searched for variants in a list of 185 puberty-associated genes (23 genes with known mutations in patients diagnosed with Kallmann syndrome, normosmic hypogonadotrophic hypogonadism or precocious puberty; 145 candidate genes near genetic variants identified in large-scale GWAS studies for age at menarche in women; 7 genes associated with age at menarche; and 10 literature-based genes) [14-17]. Variants were annotated with an in-house Paris Descartes bioinformatics platform pipeline based on the Ensembl database (release 67). Four consecutive filters were applied to narrow down the variants: 1- exonic or located in consensus splice junction (+/- 2 bp); 2- non-synonymous; 3- located in a gene identified by an NM_accession number (NM_); and 4- minor allele frequency (MAF)<1% (in gnomAD database https://gnomad.broadinstitute.org/). In all cases, sequences variant in a gene are numbered starting from the first base of the ATG codon, numbering based on the reference sequence. Description of the sequence (Human Genome Variation Society, http://www.hgvs.org/mutnomen/recs.html) was done with the assistance of Alamut Visual software version 2.4.2 (Interactive Biosoftware, Rouen, France).

3.3 In silico analysis of missense variants

To find the influence of each missense variant on its protein structure that may have an important role in disease susceptibility, in silico analysis was performed. For each variant, bioinformatics tools (SIFT, MutationTaster, Polyphen-2) (https://www.interactive-biosoftware.com/alamut-visual/) were used to identify non-synonymous variant as possibly or probably damaging. These prediction tools are based on the degree of conservation of amino acid residues in sequence alignments derived from closely related sequences.

4.1 Rare variants identified in AN patients

We performed exome sequencing for ten affected girls and 10 unaffected women as controls. In total 122,380 to 140,758 single nucleotide variants and 16,162 to 19,483 small deletions/insertions (1-10 bp) were identified across the exomes [18]. To identify genetic factors involved in anorexia and age of menarche, we search for low-frequency variants in genes among a list of 185 puberty-associated genes (Table 1). After filtering our data, it resulted in 9 affected individuals (9/10) at least one variant (no variant in patient NR279) (Table 2). In these patients, the number of variants varied from 2 (NR227) to 11(NR224) for each affected AN individual. In total, 52 variants were identified including 11 variants not previously described in all genomic databases (Table 2). One variant was a frameshift variant (VGLL3), two were in frame deletions (SCRIB, GALNT10) and all other variants were missense variants (Table 2). In total, variants were identified in 38 of the tested genes.

Table 1: List of the puberty-associated genes selected in the analysis of exome. 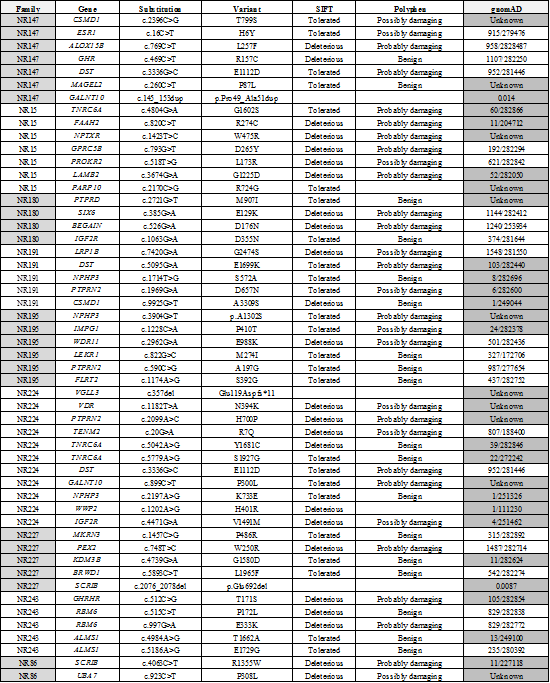 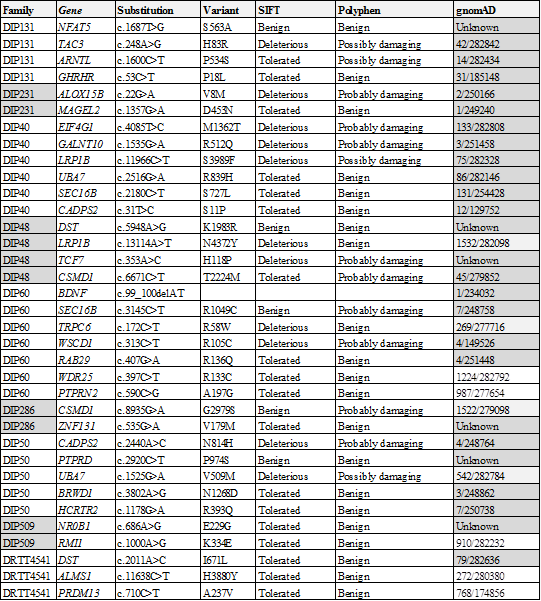 4.2 Prediction of pathogenicity of variants

To identify genetic factors that appear to become “activated” during the pubertal period increasing the phenotypic risk for AN in girls, we searched for rare variants in genes associated with age at menarche in 10 women affected by anorexia nervosa.

We identified an excess of rare variants in genes associated with age at menarche in AN patients as compared to controls. When its number is corrected by the total number of variant identified in the exome, the difference was not significant (Table 4). However, interestingly, we identified a significant enrichment of extremely rare variants and variants in genes previously identified associated with age of menarche (i.e. TNC6CA, LAMB2 and FAAH2) (Table 4) [15]. Indeed, in 2015, Lunetta and colleagues found that five missense variants (in ALMS1, LAMB2, TNRC6A, TACR3, PRKAG1) and two X-chromosome loci (IGSF1, FAAH2) were associated with age of menarche [15]. In the present study, one AN patient carried three rare variants in these genes (p.G1225D in LAMB2, p.G1602S in TNRC6A, and p.R274C in FAAH2) and another AN patient two rare variants in TNRC6A (p.Y1681C, p.S1927C). TNRC6A encodes a trinucleotide repeat-containing gene 6A protein, a member of the trinucleotide repeat containing 6 protein family. It functions in post-transcriptional gene silencing through the RNA interference (RNAi) and microRNA pathways [23]. It associates with messenger RNAs and Argonaute proteins in cytoplasmic bodies known as GW-bodies or P-bodies [24]. Variants identified in our two AN patients (NR15, NR224) were located in the C-terminal part of the protein (amino acids 1603-1622, PABPC1-interacting motif-2), known to be important for translational repression, and may impair RNAi and microRNA-induced gene silencing affecting metabolic pathways [25]. LAMB2 encodes the Laminin subunit beta-2 protein, a member of the family of extracellular matrix glycoproteins, major non collagenous constituent of basement membranes implicated in a wide variety of biological processes including cell adhesion, differentiation, migration, signaling, and neurite outgrowth. Recently, compound heterozygous missense variants were identified in patients with congenital nephrotic syndrome, ocular abnormalities and neurodevelopmental delay [26]. Interestingly, Laminin b2 is highly expressed during pituitary development and may explain the abnormal parenchyma of the anterior pituitary gland in this patient. Taking into account the role of the hypothalamus-pituitary-adrenal axis in eating disorders, variant in LAMB2 may play a role in the biological vulnerability to ED. Finally, FAAH2 encodes the Fatty acid amide hydrolase 2 (EC 3.5.1.99, oleamide hydrolase 2, anandamide amidohydrolase 2), a member of the serine hydrolase family of enzymes. Fatty acid amide hydrolase 2 degrades endocannabinoids and defects in this enzyme have been associated with neurologic and psychiatric disorders [27]. Patient carrying the missense variant p.A458S in this gene presented hypotonia, autistic features, seizures, but also anxiety disorder, suicidal ideas and feeding difficulties. Interestingly, we previously identified a rare variant (p.H312N) at the hemizygous state in a male patient with AN [28].

In the present study we identified rare variants in genes initially associated with age of menarche by GWAS analysis and confirmed by other approaches. This is the case for MKRN3 (NR227) and VGLL3 (NR224).Up to now, one of the most relevant gene underlying central precocious puberty (CPP) is the makorin ring finger protein 3 gene (MKRN3) [33]. MKRN3 is a single-exon, maternally imprinted gene, which is expressed only from the paternal allele. Consequently, only paternally-inherited loss-of-function mutations in MKRN3 cause CPP. Interestingly, MKRN3 is expressed in the mouse and human hypothalamus, a structure containing integrative systems that support physiological processes such as food intake and energy expenditure [34]. VGLL3 is a transcriptional co-factor that binds TEAD family transcription factors to regulate events ranging from wing development in fly, to muscle fibre composition and immune function in mice. Interestingly, Vgll3 play a role in the sex-biased disorders such as autoimmune diseases and may participate to the sex-biased rate of anorexia nervosa. We hypothesize that these genes account for, at least part of, the underlying shared genetic factors between age at menarche and eating disorders [13].

We also identified 29 GWAS puberty-associated genes via coding variation, without significant enrichment as compared to general population and our control sample including 10 unaffected women. The majority of these genes are localized in candidate regions for age of menarche and puberty, but were not clearly involved in puberty. For example, this is the case for the rare variant in PTPRN2 (NR224). PTPRN2 is also known la-2beta and was identify as a candidate associated with pediatric obesity [35, 36].

Disclosure and Conflict of Interest

We thank the patients for their enthusiastic participation and all physicians from the different medical and psychiatric centres.

Ethical approval All procedures performed in this study were in accordance with the ethical standards of our national research committee (Comité Protection Personnes Paris Pitié Salpétrière N°33-03) and with the 1964 Helsinki declaration and its later amendments. Informed written consent was obtained from all patients included in the study.