Phyllodes tumor is a rare fibroepithelial tumor of the breast that account for less than 1% of all breast neoplasms [1]. Clinically, it is typically a large, smooth and fast-growing mass that forms from the periductal stroma of the breast [2]. Phyllodes tumor can be considered benign, borderline, or malignant and the percentage of malignant tumors ranges from 23 to 50%. This classification depends on histologic features, as the degree of stromal cellularity and atypia, mitotic count and stromal overgrowth [3]. We report a case of a huge malignant phyllodes tumor in a 62-year old woman who presented with a large breast mass with 10-month disease evolution time. The patient underwent total mastectomy and the pathology analysis revealed a malignant tumor.

A 62-year old woman presented with a large breast mass with 10-month disease evolution time on left breast, with accelerated growth in recent months. The patient had no known breast disease or family history of breast cancer. Physical exam reveals a protruding giant mass occupying all left breast but with no evident signs of cutaneous involvement or axillary lymphadenopathy. The patient was submitted to mammography and breast ultrasound to a better characterization of the breast mass. Mammogram revealed a huge dense mass obscuring all normal breast tissue (Figure 1) and ultrasonography showed a volumous solid mass with heterogeneous echotexture, with endoluminal cystic areas and internal flow with Doppler evaluation (Figure 2). The patient was submitted to ultrasound-guided biopsy that reveals a phyllodes tumor and then underwent total mastectomy.

A breast mass with expansive limits and heterogeneous appearance, measuring 26.5 × 26 cm in dimensions, (Figure 3) was resected and the microscopic analysis showed a lesion with fibro-adenomatous changes with proliferation of epithelial and stromal components. The hypercellular stroma demonstrated marked nuclear pleomorphism, increased mitotic activity as well as irregular large cystic spaces with protruding leaf-like structures and areas of necrosis and hemorrhage (Figure 4). These features were consistent with malignant phyllodes tumor of the breast. Postoperatively the patient received local radiotherapy and is now on follow-up without signs of distant metastasis. 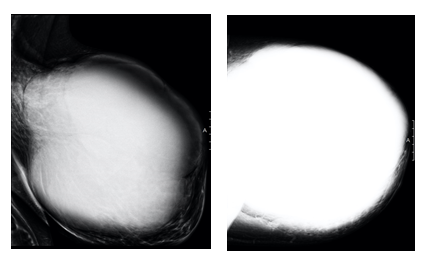 Figure 2: Ultrasound of the left breast showed a heterogeneous mass, difficult to accurately measure given it extent. Some cystic spaces are seen as well as some solid areas with vascularity. 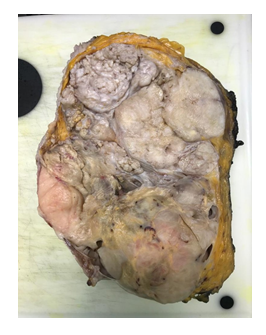 Phyllodes tumor is a rare breast tumor that occurs more frequently in women between 35-55 years old and has an incidence of less than 1% of all breast neoplasms. Clinically, these tumors frequently present as a rapid growth mass and they’re usually painless and difficult to differentiate from fibroadenomas [1, 2]. Histologically, phyllodes tumors are biphasic neoplasms characterized by the presence of stromal and epithelial components with a leaf-like appearance and cystic spaces oh histological examination. The stromal elements project into the ductal lumen with a foliaceous aspect. Phyllodes tumors are classified into benign, borderline or malignant tumors depending on histological characteristics as increased mitotic activity, degree of cellular atypia, and stromal proliferation [2-4].

Radiologically, there are no mammographic or ultrasonographic pathognomonic findings but these tumors usually present as isodense and well-circumscribed masses on mammogram with solid and cystic areas and internal flow on ultrasound with Doppler evaluation [2, 4]. Complete surgical resection of these tumors with a wide local excision is the treatment of choice as there is a high tendency to recurrences, in up to 25% of the cases. For borderline and malignant phyllodes tumors or in cases of positive margins or tumor recurrence, mastectomy is the first option and it’s essential to follow up the patients due to the risk of distant metastasis (up to 10%) [5-7].

In conclusion, it’s important that clinicians, radiologists and pathologists be familiar with the features of phyllodes tumors as they are rare breast tumors with possibility of malignancy and rapid growth [1, 2].