We report the rare case of an adult sepsis patient with very low urea blood values, a high anion gap metabolic acidosis, and high ammonia levels. After exclusion of a primary disturbance of the urea cycle, we found a severe pyroglutamic (also called 5-oxoproline) acidemia, 841 µmol l-1 (norm: 5-150), indicating a disrupture of the gamma-glutamyl cycle, a cycle which is responsible for amino acid transportation, redox metabolism, and detoxification of medications, e.g., analgesics and antibiotics. The patient initially was treated with long-term, high-dosage rifampicine, linezolid, and piperacillin/tazobactam. Such cycle defects are rarely reported and are mostly found as an inborn disease in early childhood. In adults, diseases of the liver or renal failure, sepsis or diabetes, and certain medications may trigger a secondary cycle disturbance by depletion of vitally important glutathione stores or enzyme inhibition. We recommend that physicians remain aware of extremely low blood urea values that may indicate the beginning of gamma-glutamyl-cycle failure. Countermeasures such as discontinuation of causative medication and nutrition adaption must follow.

The gamma-glutamyl-cycle, also known as Meister-cycle [1], is a metabolic pathway for transportation of amino acids across cell barriers (Figure 1). The amino acids then undergo metabolization into urea (urea cycle in the liver). The gamma-glutamyl cycle plays an important role in the liver and kidneys in detoxification processes of certain medications, e.g., xenobiotics or analgesics such as acetaminophen [2]. There exist rare inborn deficiencies of the enzymes glutathione synthetase or 5-oxoprolinase (OMIM number 266130 and 231900), resulting in accumulation of pyroglutamine acid (5-oxoproline) in blood and urine. The children show clinical signs of growth retardation, hemolysis with anemia, and neurological symptoms, e.g., ataxia and acidosis. Since the late 1990s, a few cases of otherwise healthy adult patients presenting with pyroglutaminacidemia and acid-base disturbances have been published [3,4]. Mostly, chronic application of analgesics (e.g., acetaminophen) and antibiotics was the cause of metabolic failure with a high anion gap metabolic acidosis (HAGMA) [5]. We report the case of an adult patient who presented with extremly low urea and high ammonia (NH3) values and pyroglutaminacidemia, probably due to a defect in the gamma-glutamyl-cycle in addition to septic liver impairment, high protein turnover, and antibiotic combinations. 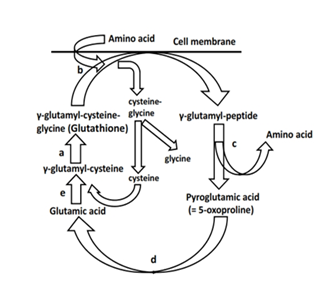 A 59-year-old male patient (body-mass-index 46.6 kg m-2) suffered from a thigh fracture due to a fall. He presented with preexisting non-insulin dependent diabetes, an arterial hypertension, and hyperlipidemia. The surgical procedure (long femur nail) was uneventful. After 5 weeks, he suspected a prosthesis fracture and the nail needed to be changed. The patient subsequently suffered from a severe chronic wound infection requiring periodic deep wound revisions under general anaesthesia; he was hospitalized for over 4 months. The lowest haemoglobin value was 6.9 g dl-1 (norm: 14-18), and in total he was transfused 23 red blood cell concentrates. The wound pathogens were as follows: Enterococcus species, Enterobacter sp., Staphylococcus aureus, and Pseudomas sp. Hospital medical staff administered a broad spectrum of antibiotics: cefuroxime (12 days in total), meropeneme (19 days), cotrimoxazol (3 days), ciprofloxacin (9 days), linezolid (33 days), piperacillin/tazobactam (33 days), and rifampicin (33 days). He was sustained with protein-rich oral nutrition (1.3 to 1.4 g protein kg-1 d-1). Three weeks before his death, he exhibited a change in mental status and showed cerebral confusion. At this time point, blood urea values of 2 to 5 mg dl-1 (norm: 10 to 50 mg dl-1) were noticed for the first time. In retrospect, these extremely low values existed 2 weeks before. The patient’s NH3 was very high - 113 µmol l-1 (norm: < 33). The plasma osmolality was 309 mOsmol kg-1 (norm: 280-296), lactate was 1.48 mmol l-1 (norm: 0.1-2.2), lowest pH 7.14, highest anion gap (HAGMA) 21.6 mmol l-1 (norm: 8-16), but normal values returned after application of sodium bicarbonate within a few days. He always had normal kidney function without any clearance impairment. A neurological evaluation and brain computed tomography scan showed normal results. A portal vein thrombosis was excluded by ultrasound. Immune diseases of hepar or hepatitis were excluded by a broad spectrum of serum tests. However, low levels of cholinesterase 573 U l-1 (norm: 7000 to 19000) and decrease of coagulation factors indicated a severe liver impairment; although aspartate aminotransferase AST was only minimally increased with 80 U l-1 (0-35 U l-1) alanine aminotransferase ALT with 32 U l-1 (0-45) and bilirubin with 0.1 mg dl-1 (0.1-1.1) were in the normal range. Selective bowel decontamination was performed and protein-rich nutrition stopped. He then obviously began to recover. But finally, the NH3 climbed to 661 µmol l-1 and the patient had generalized cerebral cramps, his trachea required intubation, and application of levetiracetam 2 g d-1 was started. The EEG presented with severe general disturbances with triphasic potentials but no epileptic signs. Liquor probe was normal. To exclude a primary hyperammonemia, the patient’s blood and urine samples were repeatedly investigated: there was a high elevation of pyroglutamine acid (5-oxoproline) 841 µmol l-1 (norm: 5-150), but no signs of a primary genetic urea cycle disorder or primary aminoacidopathy. Orotic acid in the urine was in the normal range (elevated values account for ornithine transcarbamylase deficiency, the most common urea cycle disorder) [6]. One week later, a MRT and CCT scan revealed a massive cerebral edema and the patient passed away.

We believe that a defect in gamma-glutamyl-cyclus in combination with septic liver impairment, a skeletal muscle proteolysis, protein feeding, and application of antibiotics resulted in a secondary hyperammonemia. Known as an inborn disease in early childhood, acquired disturbances of gamma-glutamyl-cycle in adults have been reported since the late 1980s [3-5]. Acetaminophenabusus impairs the cycle with HAGMA, but this drug can be excluded in the present case. In severe illnesses such as sepsis, liver diseases, renal insufficiency, or diabetes, there may exist a lack of glutathione [7]. Glutathione serves as substrate in the gamma-glutamyl-cyclus (Figure 1). It is used for the initial step to transport amino acids through cell membranes into the cell [1]. Moreover, glutathione is a redox-system and scavenges free radicals. At the end of the cyclus, glutathione is recycled and the transportation process starts again. If there is a depletion of glutathione storage, there will be an accumulation of pyroglutamine acid (5-oxoproline) resulting from a backup of the cycle and from an increasing conversion of gamma-glutamyl cysteine to pyroglutamine acid (5-oxoproline). What exactly happened to our patient is unknown, but according to his age and medical history, he did not suffer from an inborn cycle failure. During his long-term sepsis state, he developed a temporary cycle disruption. He experienced a severe glutathione depletion and/or glutathione synthetase defect and/or the antibiotics heavily impaired the enzyme 5-oxoprolinase. According to the literature, especially high doses of flucloxacillin impair 5-oxoprolinase [8]. The patient was treated with high dosages of linezolid, piperacillin, and rifampicin. Moreover, cumulative doses of rifampicin (900 mg d-1 for 5 weeks) may have aggravated his liver damage [9]. Worthy of mention, during long-term rifampicin application, initially elevated AST and ALT may again decrease and mask any liver impairment. And cotrimoxazole is known to lower rifampicin clearance [9]. In sum, the high NH3 could not adequately be transferred into the urea cycle of the liver and converted to urea and then excreted by the kidneys. A bacterial overgrowth in the bowel additionally may have increased NH3 production.

NH3 is toxic to the central nervous system. Metabolisms of huge amounts of NH3 to glutamine in the astrocytes of the brain result in osmotic effects that cause the brain to swell, resulting in edema and seizures. Kidneys excrete about 20% of daily generated NH3 load. Being the patient had normal kidney function and adequate diuresis, we initially did not consider renal replacement therapy to lower NH3; reports on this technique are not very encouraging and patient outcomes in general are very poor [10]. However, as ammonia is amenable to dialysis, continuous renal replacement therapy could have been an important option for our patient to reduce his high blood ammonia concentrations; although optimal timing and duration of dialysis or hemofiltration is not defined yet [11]. In a cohort study by Cardoso et al. the overall reduction in median serum ammonia level with continuous renal replacement therapy was 37.9% [12]. In general, dialyzer membrane should have a surface area ≥ 800 ml min-1. Machad and co-workers recently described the successful application of renal replacement therapy in an adult patient with late-onset ornithine carbamoyltransferase deficiency whose hyperammonemia was triggered by pancreatitis [13]. However, this patient suffered from a primary urea cycle disorder.

We recommend that physicians remain aware of extremely low serum urea values in severely ill patients. This could be the first sign of an impending gamma-glutamyl cycle or urea cycle dysrupture with increasing concentration of NH3 which requires immediate countermeasures, i.e., adaption of nutrition regimes and discontinuation of causative medications.

Published with the written consent of the patient’s guardian. No external funding or competing interests declared.