The use of intrathecal baclofen pumps (ITBP) has become increasingly common worldwide for the treatment of severe spasticity. Increased prevalence of patients using ITBPs makes encounters ever more common with surgical teams, these surgical interventions may be related to ITBP manipulation or completely unrelated to these devices. The anesthetist must be familiar with the normal functioning of ITBPs and be aware of baclofen pharmacokinetics in the cerebrospinal fluid, the occurrence of baclofen overdosing or withdrawal, and the potential pharmacological interactions between baclofen and drugs commonly used intraoperatively.

We present the case of a successful management of a patient with chronic use of an ITBP which had to be suspended before undergoing a surgical procedure to perform intraoperative neuromonitoring to guide the surgical intervention.

A good communication and organization of the multidisciplinary team improves the prognosis of the patient and reduces morbidity and mortality.

Baclofen is an analog of the inhibitory neurotransmitter gamma-aminobutyric acid (GABA), specifically the GABA-B receptor in the posterior horn of the spinal cord. Its union with GABA-B hyperpolarizes neurons, increases potassium conductance, and lowers calcium and other excitatory neurotransmitters entrance [1]. Relieving the spasticity and stiffness originating in the brain or spine occurs through pre- and postsynaptic inhibition, reduction of the mono- and polysynaptic reflex, decreased gamma motor neuron activity, and reduction of afferent transmission from muscle bundles in the spinal cord [2,3]. ITBPs are useful for spasticity or myoclonus cases which are oral-baclofen refractory, and their use is becoming increasingly more common. The perioperative period may be of great risk in these patients because of lack of experience managing these devices. It is important for the anesthetist to be familiar with baclofen pharmacokinetics in the cerebrospinal fluid, the occurrence of baclofen overdosing or withdrawal, and the potential pharmacological interactions between baclofen and drugs commonly used intraoperatively. We present the case of a successful management of a patient with chronic use of an ITBP which had to be suspended before undergoing a surgical procedure to perform intraoperative neuromonitoring.

Written informed consent to publication was obtained from the patient to present the following case. A 62-year-old male had a neurostimulator implanted at the T8 level for treatment of chronic lumbar pain secondary to surgical instrumentation of L4-L5 two years prior. On the fourth day after the neurostimulator implantation, an epidural hematoma appeared which was immediately surgically drained; however, the patient developed complete spinal cord syndrome as a sequela at a neurophysiological motor level of T11, without remission of pain, myoclonus, and spasticity. Consequently, a baclofen intrathecal pump of the brand Synchromed (Medtronic, Minneapolis, MN) for myoclonus and spasticity management was placed, as well as multiple pharmacological and non- pharmacological treatments to manage chronic pain. One year later, the patient consulted at the Pain Clinic at Hospital Ángeles Lomas for treatment of the chronic pain which had never resided after his previous intervention. X-rays were taken to locate the neurostimulator which was located at T8. The battery, however, was located in the right paravertebral region at L1 level (Figure 1) and was displacing the dural sac from right to left, thus causing constant pain. The battery was scheduled to be relocated at the right gluteus level on the upper right quadrant (Figure 2). 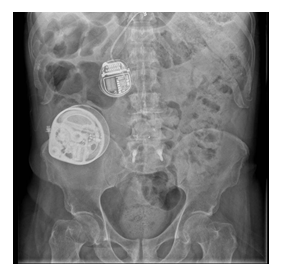 Figure 1: Original location of neurostimulator battery at the right paravertebral region at L1. 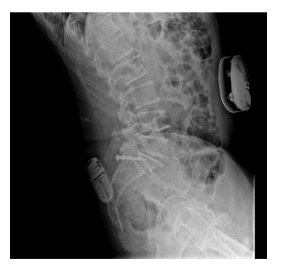 The ITBP, which was administering 235.48 micrograms (mcg)/day of baclofen, was stopped 12 hours before the surgical procedure. Upon entering the operating room non-invasive monitoring was placed with normal vital signs, train of four (TOF), and Bispectral Index Monitor (BIS). The patient received preoxygenation at 5 liters per minute with a face mask for 5 minutes, and induction was performed with midazolam 2 milligrams (mg), fentanyl 250 mcg, propofol 150 mg, and cisatracurium 6 mg. A direct laryngoscopy was performed with a #3 Macintosh blade with a Cormack-Lehane I visualization, an armored orotracheal tube with an internal diameter of 8 centimeters was placed. Its proper placement was verified with capnography and symmetrical bilateral auscultation. The patient’s eyes were protected, he was placed in a prone position and bony prominences were protected. During the procedure he was hemodynamically stable with a mean blood pressure of 80 mmHg, heart rate (HR) of 65-78 beats per minute, with volume-controlled mechanical ventilation. Maintenance was done with total intravenous anesthesia with a 3-mg total dose of ketamine, an 80-mg total dose of lidocaine, a 350-mcg total dose of fentanyl, a 740-mg total dose of propofol. Analgesic and anti-inflammatory coadyuvants were added: dexamethasone 8 mg, paracetamol 1 gr, and parecoxib 40 mg. In the neurophysiological monitoring the T8-level somatosensory evoked potentials were observed to progress to T10. Lysis emersion was performed after corroboration of TOF 100 % and the patient was extubated without adverse incidents. He was taken to the Postanesthesia Care Unit (PACU) with a blood pressure of 126/73, respiratory rate of 13, HR of 77, O2 saturation of 94 %, a visual analog scale (VAS) of 2/10, without Postoperative Nausea and Vomiting (PONV). The baclofen intrathecal pump was restarted 6 hours after the surgical procedure was finished. During the perioperative period no clinical data were present of withdrawal syndrome, baclofen overdose or pharmacological interactions between the anesthetic agents and baclofen.

The low penetration through the blood-brain barrier and subsequent high doses (60-120 mg/day) necessary for a therapeutic effect, along with its corresponding systemic adverse effects, are disadvantages of oral baclofen administration [4]. Refractory spasticity or adverse effects due to intolerance to baclofen are present in up to 25% of the patients. These same patients can benefit from the administration of intrathecal baclofen by using a pump implanted in the abdominal wall which administers the drug through a catheter that is surgically placed in the intrathecal space. Direct intrathecal distribution lowers the total dose > 100 times compared to the oral administration, as well as the systemic adverse effects. The intrathecal baclofen doses necessary for a clinical effect vary widely from one patient to another (12-2003 mcg/day) [4]. Knutsson et. al. measured serum and cerebrospinal fluid (CSF) baclofen levels in patients who were receiving treatments of 30-90 mg/day orally, and they found serum levels of 50-650 mcg/ml (a probable therapeutic minimum of 90 mcg/ml) with corresponding CSF levels < 12 to 95 mcg/ml [5]. Multiple interactions between oral baclofen and drugs commonly used during general anesthesia have been reported. Paneira et. al. observed a longer analgesic effect of intravenous fentanyl with concomitant oral baclofen dosing, as well as a significant decrease in the total dose used in patients having general anesthesia with nitrous oxide and fentanyl [6]. Studies conducted in rats have shown a decrease in onset of action, and an increase in duration of action of inhaled anesthetics in rats that had previously received oral baclofen [7]. Severe bradycardia and hypotension have also been reported in patients under balanced general anesthesia who had received oral baclofen before the surgery, leading to assume a mechanism of lowering the central sympathetic activity [8]. Intrathecal baclofen administration in boluses of 100-600 mcg reaches serum concentrations of 5-10 mcg/ml, while a continuous infusion of 50-1200 mcg/day reaches serum concentrations of 0-5 mcg/ml [14] Baclofen concentrations in the CSF reach ranges of 130-950 mcg/ml with administration of direct intrathecal baclofen [9]. Considering the almost void serum baclofen concentrations of our patient, we predicted a low probability of pharmacological interactions during the transanesthetic period. The general recommendation is to continue using the ITBP intraoperatively; however, with our patient this was not possible due to the neuromonitoring of somatosensory and motor evoked potentials to guide the surgical procedure. Using ITBP results in a significant decrease in the integrated electromyographic activity both at rest and during stimulation, [9] as well as a marked elimination of wave area and amplitude as measured with somatosensory evoked lumbosacral potentials [10]. A decision was made to pause the ITBP 12 hours prior to the surgical procedure considering the 5 hour mean life of the ITB in continuous infusion, and also considering that the clinical effect usually lasts for about 9-16 hours following a bolus [11]. The lumbar:cistern concentration gradient of baclofen is 4:1, the drug concentration being higher at the catheter tip area and a exponentially lower farther away from it [12]. Considering neuromonitoring of evoked potentials at T11-L5, should there be a residual effect of baclofen, it would be expected at T10 and therefore would probably not interfere with neuromonitoring. The biggest risk expected in our patient was acute intrathecal baclofen withdrawal syndrome, which usually occurs 1-3 days after stopping the intrathecal administration of baclofen [13]. It is characterized by an increase in spasticity, high blood pressure, tachycardia, hyperthermia, and altered mental status; severe cases exhibit seizures, autonomic instability, rhabdomyolysis, multiple organ failure, and death. Its treatment consists of life support, oral o enteral administration of high doses of baclofen and intravenous doses of benzodiazepines (among other agents) while intrathecal administration is restarted. The patient’s evolution was closely monitored throughout the perioperative period and did not present this complication. Manipulating and restarting the ITBP increases the possibility of overdosing. This may occur minutes after the administration, and it is characterized by generalized flaccidity and hyporeflexia, respiratory depression or apnea, seizures, comma, autonomic instability, hallucinations, hypothermia and heart conduction anomalies [14]. Its management consists of life support measures, especially invasive mechanical ventilation, which is usually necessary for some days. In severe cases, the use of lumbar puncture has been described in which 30 ml of cerebrospinal fluid are aspirated, and the same volume of 0.9% saline solution is administered. The patient did not present any overdose-related symptoms. Successful transoperative use of an epidural catheter has been described in patients implanted with an ITBP, always considering its anatomical location, and in collaboration with the team in charge of taking care of the ITBP [15]. In the case of our patient this anesthetic technique could not be considered in view of the need to monitor somatosensory and motor evoked potentials. Using an ITBP is increasingly common, and the anesthetist must know its impact on their perioperative management. Due to the low serum concentration baclofen reaches when intrathecally administered, systemic effects and pharmacological interactions do not usually appear in the transanesthetic period. Handling the dose of intrathecally administered baclofen requires extreme care since a baclofen overdosing or withdrawal syndrome may occur, both with the potential risk of the patient’s death. A good communication and organization of the multidisciplinary team improve the prognosis of the patient and reduce morbidity and mortality.