Postoperative Residual Curarization in Difficult Environment for the Practice of General Anesthesia: Inventory of the Yaounde/Essos Hospital Center

1Departement of surgery and specialities, Faculty of medicine and biomedical sciences, University of Yaounde 1, Cameroon

2Departement of surgery and specialities, Higher institute of medical technology, University of Douala

3Departement of surgery and specialities, Faculty of health science, University of Buea

This was a prospective and descriptive study carried out over a period of 3 months in the anesthesia department of the Yaounde-Essos hospital center. It included all adult patients operated on under general anesthesia for elective surgery, and who received vecuronium bromide administration during the anesthetic procedure.

A total of 80 patients were collected from 150 acts of anesthesia performed during the study period. The average age was 44 years old, the sex ratio of 1.10 in favor of men. The patient's extubation was based in the majority of cases (82.6%) on the combination of the following clinical criteria: the presence of spontaneous ventilation and swallowing reflex, the positive head lift test and the level of correct consciousness. The incidence of postoperative residual curarization was 50%. The main complications were hypoventilation associated with hypoxia (40%), diplopia (35%) and apnea (25%).

The incidence of residual curarization remains high at the essos hospital centre. Reliable detection of curarization can only be done with a measuring instrument.

Curarization is caused by the administration of curarizing substances which cause muscle paralysis. Residual postoperative curarization is the persistence of curative clinical effects or the absence of complete restoration of muscle strength after administration of curare [1,2,3]. It is defined by a T4/T1 ratio of less than 90% at the train of four on the abductor of the thumb in the postoperative period [1,3]. It is potentially responsible for postoperative respiratory complications [3]. Monitoring of curarization is an essential part of the practice of general anesthesia [1,3]. It makes it possible to use non-depolarizing curares with precision, to obtain good intubation conditions, muscle relaxation adapted to the type of surgery, as well as a rigorous assessment of the decurarization process. In sub-Saharan Africa, the lack of adequate infrastructure for the correct practice of general anesthesia makes extubation of the patient difficult at the end of the surgical procedure. The decision to extubate the patient at the end of the surgery is usually based on finding the clinical criteria for decurarization. This work was initiated with the aim of evaluating the relevance of clinical extubation criteria in the prevention of postoperative residual curarization in regulated surgery in adults, in an environment unfavorable to the practice of general anesthesia.

This was a prospective descriptive study over a 3-month period, from November 28, 2019 to February 28, 2020. It took place in the anesthesia department of the Yaounde-Essos hospital center. After ethics committee approval, patients over 18 years of age seen in an anesthesia consultation for scheduled surgery under general anesthesia were included in the study. Myasthenic patients and pregnant women were excluded, as were those who refused to participate in the study. A detailed explanation of the protocol was provided to patients in order to obtain free and informed consent. All participants were seen in a pre-anesthetic consultation to assess the anesthetic and operative risk. To avoid misinterpretation, the premedication was non-drug only. The method of calculating the preoperative fasting compensation was that of Holliday and Segar (4-2-1 rule). The surgery was said to be "short" when it was less than 90 minutes, "medium" if it was between 90 and 180 minutes, and "long" if it was longer than 180 minutes. All patients received the same anesthetic induction protocol: fentanyl 5μg/kg IV, propofol 3mg/kg IV, vecuronium bromide 0.10mg/kg IV. The patient's extubation on the operating table was decided on the basis of clinical decurarization criteria:

- The positive “head lift test” or the possibility of keeping the head elevated above the plane of the bed for 5 seconds,

- The resumption of spontaneous ventilation with a respiratory rate between 10 and 30 cycles per minute,

- The presence of the swallowing reflex,

- The absence of diplopia

- And the positive “tongue depressor test” which designates a clinical test which assesses the muscle strength of the masseters by asking the patient to squeeze a tongue depressor between the incisors.

During the study period, 80 patients met the inclusion criteria for a total of 150 acts of anesthesia performed during the same period, or 53.3%. The characteristics of the study population are shown in table 1. The average age of the patients was 44 years with extremes ranging from 18 to 75 years. The sex ratio was 1.10 in favor of men. According the physical status classification system of American Society of Anesthesiologist (ASA), the patients mainly belonged to the ASA I (53%) and ASA II (46%) classes. Almost half of the workforce (47%) received reinjection of curare during the anesthetic procedure. Antagonization of vecuronium by neostigmine at the end of the surgical procedure was performed in 28 patients (17.5%), of whom 18 (11.25%) had persistent neuromuscular block (T4/T1 <90%). The criteria which authorized antagonization by neostigmine in our sample were: either the resumption of spontaneous ventilation in 57.2% (with the absence of other clinical signs of decurarization), or the total absence of clinical criteria for decurarization (42.8%). The decision to extubate the patient at the end of the surgery was based on the combination of the following criteria: the presence of spontaneous ventilation with a respiratory rate greater than 10 cycles per minute (cpm), the presence of the reflex of swallowing, the positive head lift test and the correct level of consciousness (82.6%). The association "presence of the swallowing reflex and spontaneous ventilation with FR >10 cpm" guided the decision to remove the tracheal tube in 15% of cases. Half of the study population had a T4/T1 ratio <90% by the first minute after tracheal extubation (Figure 1). The surgery was of average duration in more than half of the cases (59%), of short duration in 21% of cases and of long duration in 20% of cases. The frequency of complications from postoperative residual curarization was 40%. The main complications were bradypnea (40%), transient apnea (35%), diplopia (25%). The management of these complications was straightforward in all cases: supplementation with oxygen with a face mask, and ventilation with a self-inflating balloon with a one-way valve for the patients who presented with apnea. There was a significant correlation between age group and depth of postoperative residual curarization (Table 2). The level of postoperative residual curarization was deeper in the subject over 65 years of age. There was also a significant link between the duration of surgery and postoperative residual curarization (Table 3). Residual curarization was found mainly in the group of patients who had undergone short-term surgery in 88.2% of cases. Furthermore, there was no causal link between the residual curarization, the history and the ASA class of the patient.

Table 1: Characteristics of the study population

Table 2: Distribution of patients with postoperative residual curarization according to age group

Table 3: Distribution of patients with postoperative residual curarization according to the duration of surgery 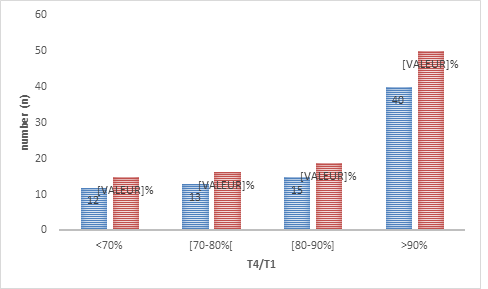 Figure 1: Distribution of patients according to the depth of curarization at the first minute after extubation.

Conflict of interest for each author

All authors contributed to the development and conduction of this manuscript. All authors have read and approved the final version of the manuscript.

The authors wish to thank the anesthesiologists, surgeons and the nursing staff of the operating theatre of the Yaounde/Essos Hospital Center for their support of this study.