Post-Traumatic Stress Disorder (PTSD) is a psychiatric disorder that develops after a traumatic event. PTSD in a surgical patient can impact postoperative outcomes. Evidence suggests that the perioperative process can transiently exacerbate PTSD symptoms. Anaesthetist should be aware of its association with cardiovascular dysfunction, chronic pain, depression and cognitive dysfunction. So managing PTSD intraoperatively and trying not to provoke an acute episode perioperatively is extremely challenging for an anaesthetist. Here we are reporting a case of intraoperative onset and management of post-traumatic stress disorder during femur nailing.

Post-Traumatic Stress Disorder (PTSD) is an anxiety disorder that can occur after experiencing or witnessing a traumatic event which involves threatened death or serious injury [1,2]. The presence of PTSD in a surgical patient before, during and after perioperative period is associated with co-morbidities including cardiovascular dysfunction, chronic pain, depression and cognitive dysfunction, all of which can influence the risk of peri and postoperative morbidity and mortality [3]. So management of comorbidities associated with PTSD and prevention of evoking post-traumatic symptoms in the intraoperative period by interacting with patients and ameliorating anxiety is important for anaesthetist. 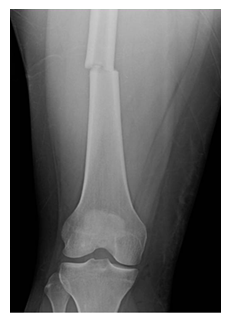 Patient was planned for ORIF with nailing under sub-arachnoid block for fracture left shaft of femur. 2.6 ml of 0.5% heavy Bupivacaine was injected in the sub-arachnoid space. Desired and adequate level of anaesthesia was achieved. Intra-operative vitals were monitored and maintained. Surgery lasted for 2 hours. Towards the end of the surgery, patient became anxious, agitated and started shaking, had tachypnea of 33 breaths/min and tachycardia with HR of 130 beats/min. He suddenly started responding less to commands and had difficult to arouse on commands. He was given 100% O2 through Bain’s circuit. Vitals were monitored. However, patient continued to be agitated and tachypnea persisted with respiratory rate (RR) 40 breaths/min. An ABG was sent which revealed pH=7.513, pCO2= 22.4 mm of Hg, pO2= 118.9 mm of Hg, HCO3=26.8 mmol/l, SpO2=99%, BE= 2.1mmol/l. Auscultation of chest revealed normal vesicular breath sounds with bilateral chest clear and normal heart sounds. Patient was irritable so was given injection midazolam 1mg i.v.  His father was called in operating room to calm him and to make him feel safe.  After some time his RR settled down to 20 breaths/min. He was conscious, responding to all the commands and maintaining his vitals. However, tachycardia persisted with HR 106 beats/min. He was observed in the HDU. Repeat ABG showed pH=7.4, pCO2=39, pO2=90, HCO3= 24 mmol/l, SpO2= 98%, BE= 0.4 mmol/l. Blood sugar, urea, creatinine were sent. Urine for fat globules, d-dimer, fibrinogen degradation products were sent to rule out fat embolism. All blood reports came normal. ECG, chest x-ray and fundus examination were all normal. After ruling out all medical causes, psychiatric consultation was sorted. The provisional diagnosis of PTSD was made by the psychiatrist. Injection lorazepam 1mg i.v. was given 2 hours post-operatively as advised by psychiatrist, after which patient was comfortable. Vitals were normal and then he was shifted to the general ward by afternoon. Oral benzodiazepines were prescribed by consulting psychiatrist as a part of the regular post-operative treatment regimen and were continued for 4 weeks. On regular follow ups in out-patient department, the patient complained of intermittent difficulty in sleeping and concentrating at work, having flash backs of the operating room scenes, not being interested in any daily chore, getting irritable and avoiding recall of the road traffic accident he underwent. The diagnosis of post-traumatic stress disorder was confirmed by the psychiatrists and appropriate treatment with regular follow up was continued for the patient.

Post-Traumatic Stress Disorder (PTSD) is a psychiatric disorder whose diagnostic criteria include exposure of the patient to a traumatic event that evoked feelings of horror, fear and intense hopelessness (b) presence of at least one symptom of re-experiencing (c) avoidance or emotional numbing (d) persistant arousal (e) symptoms persisted for at least one month (f) these symtoms significantly impacted functioning or resulted in significant distress to the patient [4]. The presence of PTSD in a surgical patient can be of importance because it is associated with use of psychoactive medications and presence of psychological symptoms e.g. depression, chronic pain, cognitive dysfunction and occasionally cardiovascular co-morbidities which may increase the risk of peri-operative morbidity [3]. In preoperative assessment anaesthetist should focus on presence of cardiovascular disease, history of substance abuse, depression, use of psychoactive medications, presence of chronic pain [3]. To avoid withdrawal, psychoactive medications should generally be continued throughout the perioperative period [5]. Multimodal analgesia should be used in surgery. Patients with PTSD are anxious around unfamiliar people and unfamiliar environments [6]. So for evoking symptoms of PTSD the operating room team should interact with the patient to establish trust, ameliorate anxiety and should assure the patient that the environment is very safe. Staff should minimize loud noises and movements to avoid gaining the attention of patient. Also, whole team should emphasize that its goal is to make the patient comfortable during surgery. Triggers which precipitate acute anxiety should be avoided [7].  Evidence suggests that the perioperative process can transiently exacerbate PTSD symptoms [3]. There is a case report in which a young woman developed PTSD after sexual assault. She became acutely agitated and was physically violent towards operation room staff. Later she reported reexperiencing her prior abuse during that episode [7]. So surgery and anaesthesia can exacerbate posttraumatic symptom severity. PTSD patients stay undiagnosed and so do not receive psychological help [8]. In our patient, after ruling out the possible cardiovascular, respiratory system and psychological causes for the symptoms, patient was referred to the psychiatrist who made the diagnosis of PTSD and prescribed benzodiazepines (BDZ). Patient favourably responded to BDZ which relieves the symptoms of irritability, insomnia, anxiety and panic. Other treatment modalities include Selective Serotonin Reuptake Inhibitors (SSRI), Monoamine Oxidase Inhibitors (MAOI), Tri-cyclic Anti-depressants (TCAD), atypical anti-psychotics and anti-convulsants [8]. Nonpharmacological treatment of PTSD includes various forms of cognitive behavior therapy, reprocessing and desensitization of eye movements [9]. In spite the high frequency and potential severity of the psychological consequences of road traffic accidents, psychological services for patients are not provided in a routine comprehensive way. Often severity of psychological distress is undermined in these patients [10]. In our patient extensive pre-operative psychological interview would have benefitted. If diagnosed in early preoperative period, factors provoking PTSD would have been avoided in intraoperative period.

The diagnosis and anaesthetic management of a       patient with PTSD can be challenging. The operative team comprising the anaesthesiologists and operating surgeons should establish trust while interacting with patient. Team should introduce themselves and should explain their respective roles in the surgery, calmly. They should reassure the patient that environment is safe there. Staff should minimise un-expected loud noise and extra movements. Pain and anxiety should be ameliorated. In future more research should be there to find PTSD implications in postoperative morbidity and mortality and to find ways to diagnose and treat it perioperatively.