Giant CELL ARTERITIS (GCA) is a systemic autoimmune disease that classically presents with jaw claudication, temporal headache and transient visual loss, affecting mostly people above the age of 50 years. However, diplopia due to cranial nerve 6 palsy (CN VI) has been rarely reported in GCA. Moreover, bilateral CN VI palsies, occurring in a sequential fashion in GCA is exceedingly rare. We report a case of a 70-year-old man who was admitted to our hospital twice within the span of one month with persistent binocular diplopia due to sequential, bilateral, CN VI palsies (right followed by left CN VI palsy) with associated eye pain, temporal headache, malaise and joint pain. The inflammatory markers including Erythrocyte Sedimentation Rate (ESR) and C-Reactive Protein (CRP) were elevated at both admissions. He was treated with intravenous steroids with a complete resolution of his binocular diplopia, eye pain and temporal headache. Despite a negative biopsy of the temporal artery for evidence of inflammation, he was diagnosed with GCA by rheumatology, considering the fact that GCA pathology may have a patchy distribution, and a negative biopsy does not rule it out absolutely. This case underscores the importance of recognizing GCA as a differential diagnosis in patients presenting with binocular diplopia.

Giant Cell Arteritis (GCA) is the most common type of vasculitis in large sized vessels. It primarily targets the tunica adventitia and media of arteries, such as branches of the ophthalmic artery [1]. If GCA is not identified and treated promptly, adverse effects such as ischemia of the visual pathways can occur, causing monocular or bilateral vision loss [2]. Other ophthalmic symptoms that can occur include ptosis, proptosis, eye pain, and diplopia. Sixth nerve palsy is one of the most common causes of diplopia [3]. However, CN VI palsy as a presenting manifestation of GCA is rare. There is growing data regarding the involvement of multiple cranial nerves in GCA, and CN VI palsies is one of them.  Herein, we report a rare case of a patient, who presented with binocular diplopia due to sequential bilateral CN VI palsies and was eventually diagnosed by rheumatology with presumed GCA, based on his clinical picture, raised inflammatory markers and resolution of symptoms after receiving steroids.

Our patient is a 70-year-old man, who presented with a five-day history of binocular diplopia. Diplopia was horizontal, and worse in right.  He also had associated right periorbital and temporal pain. He further gave a history of malaise and joint pain mostly in the neck, knees and wrists for a month prior to his presentation.   His past medical history was significant for type 1 diabetes (last A1C 8.1 mg/dL and presenting blood glucose 115 mg/dL), hypertension, hyperlipidemia, and deep vein thrombosis. Neurological examination showed complete right CN VI palsy, with restriction of right eye abduction on horizontal gaze testing. Rest of the neurological exam, including fundoscopy was normal. Computer Tomography (CT) of the brain was unremarkable. Magnetic resonance imaging (MRI) of the brain showed non-specific tortuosity of the optic nerves bilaterally raising suspicion for idiopathic intracranial hypertension. There were no areas of restricted diffusion on MRI. Magnetic resonance angiogram and venogram of head were normal. ESR was 79 mm/h (normal <20) and CRP was 7.7 mg/l (normal <0.8).  The impression at this point was right CN VI palsy, likely secondary to a microvascular ischemic infract, given his elevated hemoglobin A1C, and hence a full stroke workup was instituted. The workup revealed a normal Low-Density Lipoprotein (LDL) of 56 mg/dl, and normal transthoracic echocardiogram (including ejection fraction and the left atrial size). He had a complete resolution of diplopia, along with total resolution of horizontal gaze restriction, 2 days after admission, and was therefore discharged home. The final impression at that time was transient right CN VI palsy due to microvascular ischemia, given his stroke risk factors. However, this did not explain the spontaneous resolution of the diplopia, nor the elevated inflammatory markers.

Three weeks later, he presented again with binocular diplopia with associated bitemporal headache and left eye pain and conjunctival injection. This time, however, the examination demonstrated bilateral CN VI palsies, left worse than right. Again, there were no other neurological findings on examination except for mild bilateral temporal tenderness. Repeat brain MRI continued to show nonspecific bilateral optic nerve tortuosity. ESR and CRP were persistently elevated at 92 mm/h and 12.2 mg/l respectively. Due to the MRI findings, lumbar puncture was performed and showed opening pressure of 16 cm H2O. He was evaluated by rheumatology, who strongly suspected giant cell arteritis. Therefore, he was started on a three-day course of methylprednisolone 1000mg daily. His diplopia, headache and eye pain resolved completely by the third dose of steroid. He underwent a bilateral temporal artery biopsy, which was negative for signs of active inflammation, including giant cell formation, but pathology report noted that healed arteritis could not be excluded. He was followed by rheumatology throughout his hospital course and their final impression was biopsy-negative giant cell arteritis. The negative biopsy was supposed to be due to patchy nature of the disease, and administration of steroids prior to biopsy, which could have potentially altered the biopsy results. The patient was then discharged on oral prednisone and continued to be free of diplopia and headache at his 2 months follow-up. 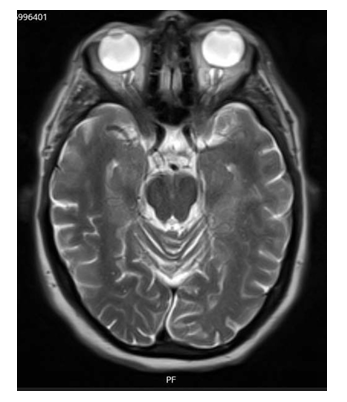 Figure 1: A T2 sequence of brain MRI demonstrates bilateral optic nerves tortuosity with no features of optic or preoptic sheath enhancement or flattening of the globes.

Although a temporal artery biopsy was negative for giant cell formation in this case, we cannot completely rule out GCA, as steroids were used before the biopsy, and diplopia caused by cranial nerve palsies has been noted in this condition. ESR, the most important test to indicate inflammation, and CRP can be both elevated in GCA [7]. The fact that our patient was over 50 years of age, and had a new-onset headache, in presence of elevated ESR and CRP, were all strongly suggestive of diagnosis of GCA. In addition, 19% of patients whose temporal artery biopsy is negative for giant cell formation develop GCA later on [13]. Our case emphasizes the fact that diplopia due to bilateral CN VI palsies may occur in GCA. GCA mainly affects large arteries, including intracranial vasculature, and multiple cranial nerve palsies, although rare, have been and reported. In a case report two patients were described presenting with multiple cranial neuropathies due to GCA. One patient with cranial neuropathies involving CN III, IV & VI demonstrated active arteritis on temporal artery biopsy, while the other patient had involvement of CN III, V and VI, with temporal artery biopsy showing thickening and multinucleated giant cells [4]. In another case report, a patient with GCA had CN III, VIII and X palsies without the presence of typical giant cells [5]. All the patients showed resolution of some of their symptoms after receiving intravenous steroids followed by oral prednisone, potentially suggesting cranial nerve palsies in GCA can improve with the use of steroids. In addition, when multiple cranial nerves are affected in GCA, CN III commonly affected [4, 5, 9]. However, in our case, although more than one cranial nerve was affected, the pattern was bilateral, sequential CN VI involvement, with sparing of CN III, and symptoms completely resolved with the use of steroids.

GCA has many ophthalmic and neurologic manifestations, including headache, pain in the eye, jaw or temporal region, and myalgias [9]. Patients with GCA can present with vision loss that is serious, sudden, or sequential, where the other eye gets affected days to weeks after the initial eye [10]. It is usually the first manifestation of the condition, often permanent, and unlike diplopia, may not improve with the use of steroids [8, 12]. Diplopia secondary to CN VI palsy should always be considered as a clinical possibility in patients with GCA. In a retrospective and multicenter analysis, 10 of the 19 GCA patients who had constant diplopia had CN VI palsy [6]. Moreover, in two case reports, patients with CN VI palsy had diplopia [7,9], suggesting that there is a likely association. Our patient was atypical in that he developed horizontal-gaze diplopia to either side, after sequential bilateral CN VI palsy. Therefore, atypical manifestations of GCA, such as binocular diplopia, are important considerations for diagnosis of this disease. GCA due to specifically CN VI palsy is rare, as it usually occurs due to ocular ischemic manifestations, such as Anterior Ischemic Optic Neuropathy (AION), Posterior Ischemic Optic Neuropathy (PION), and central retinal artery occlusion (CRAO) [12]. In a case series study, out of the 36 patients who had systemic GCA, only 1 had isolated CN VI palsy and no ocular ischemic manifestations, whereas 17 patients had AION, 2 patients had CRAO, and 1 patient had PION. Moreover, in patients with occult GCA, similar findings were present. Out of the 6 patients with occult GCA, only 1 had isolated CN VI palsy and 5 had AION [11]. In conclusion, this case reinforces the importance of considering the diagnosis of GCA when evaluating patients with diplopia and unexplained isolated cranial nerve findings, such as CN VI palsy.