Pseudo-pseudo Meig’s syndrome (PPMS) is an exceedingly uncommon disease in patients with diagnosed systemic lupus erythematosus (SLE) or mixed connective tissue disease (MCTD). This is a case report of a 23-year-old woman with a history of systemic lupus erythematosus (SLE), presented with rapidly increasing abdominal girth, facial/pedal edema, oliguria, and dyspnea, who was presumed to be developing pre-eclampsia in her 35th week of gestation. She was managed by an emergency Cesarean-section, and an incidental finding of peri-operative ascitic fluid was obtained and a right-sided pleural effusion. Upon further investigations, her CA-125 levels were found to be elevated. Her anti-double-stranded DNA titers were increased whereas complement levels (C3 and C4) were reduced indicating SLE flare. All these features suggested the diagnosis of pseudo-pseudo meig’s syndrome, a rare condition associated with SLE. It is asserted in our case that her pregnancy triggered the lupus flare.

A 23 year old female of Asian ethnicity, primigravida, weighing 60 kilogram, known case of systemic lupus erythematosus for 2 years, with a family history of tuberculosis and preeclampsia, presented to us at 35 weeks of gestation with complaints of rapidly increasing abdominal girth, facial puffiness, bilateral pitting pedal edema up to the shins, decrease urinary output with frothing, and dyspnea for 1 week. She denied any easy fatigability, abdominal pain, bleeding per vagina, yellow discoloration of eyes and skin, nausea/vomiting, fever, night sweats, or skin rash. Empirically the patient was started on oxygen inhalation, nebulization with salbutamol, and furosemide 40 mg intravenously. The emergency cesarean section was planned and a healthy male alive baby was delivered. Intraoperatively, ascitic fluid was found incidentally and 800 milliliters of ascitic fluid were drained and sent for further workup.

The physical examination was unremarkable except for blood pressure of 150/90 mmHg, mild pallor, bilateral periorbital puffiness, bilateral pitting pedal edema up to the shin, chest expansion was decreased on the right side, with stony dull percussion note, decreased breath sounds, and heart sounds were also muffled. The initial laboratory workup was hemoglobin 8.4 milligrams/deciliter, total leukocyte count (TLC) was 20.1 cells per ml of blood with neutrophil count of 60% and lymphocytes 20%, total protein was 3.99 gram per deciliter, while albumin was 1.37 gram per deciliter, and globulin was 2.62 gram per deciliter, total albumin to globulin ratio was 0.52, Erythrocyte sedimentation rate (ESR) was 98 mm/hour, prothrombin time (PT) was 29.3 seconds, international normalized ratio (INR) was 0.95. Urine analysis shows 3.5 grams per deciliter of protein along with the granular cast and red blood cells. A protein to creatinine ratio was turned out to be 1.3. A chest x-ray showed right-sided pleural effusion and enlarged heart shadow (Figure 1). A transthoracic echocardiogram showed pericardial effusion. Ultrasound abdomen and pelvis showed ascites and post-partum changes (Figure 2). The differential considerations were meig’s syndrome, pre-eclampsia, disseminated intravascular coagulation, HELLP syndrome, and abdominal tuberculosis. 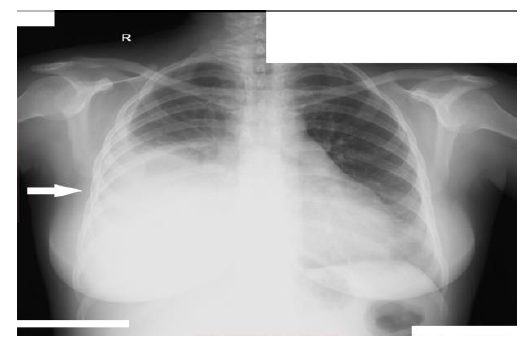 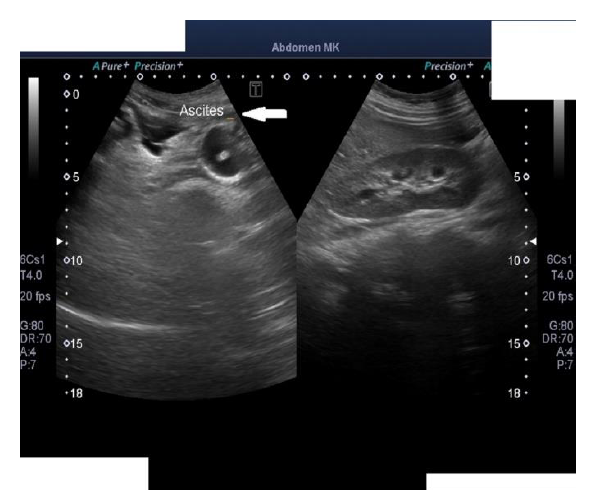 Figure 2: Ultrasound abdomen and pelvis showing gross ascites with post-partum changes and ruling out any mass or cystic lesion.

Ascitic fluid workup showed albumin of 3.4 gram per deciliter and Serum ascites albumin gradient ratio of 0.3. Ultrasound-guided tap for pleural effusion was done which showed pleural fluid albumin of 3.2 gram per deciliter and Lactate dehydrogenase of 2 units per liter. Immunologic work up index was anti-neutrophil cytoplasmic antibody (ANCA) 1:1000 (+1), Anti double-stranded DNA antibodies (Anti-DNA ds) titers were >1:80, while C3 levels were 30 milligram/deciliter and C4 levels were 6 milligram/deciliter. Ferritin levels were >1000 nanograms/milliliter. CA-125 levels were turned out to be 225 units/milliliter. The diagnosis of pseudo-pseudo meig’s syndrome was confirmed, and the patient was started on pulse therapy with injection methylprednisolone 1 gram intravenously on a daily basis for 5 days. After that the patient was switched to oral methylprednisolone 60 mg daily in two divided doses, oral leflunomide 20 mg once daily, and oral hydroxychloroquine 200 mg twice daily for 6 weeks. The patient was discharged after 1 week with regular follow-ups in the ambulatory clinics at the rheumatology and gynecology department for 6 months.

Pseudo-pseudo Meig’s syndrome (PPMS) was first pioneered by TJALMA in 2005 by describing a case of a young female with concomitant history of SLE and classical characteristics of the syndrome. PPMS is an exceedingly uncommon disease in patients with diagnosed systemic lupus erythematosus or mixed connective tissue disease [3]. SLE is an autoimmune disorder that can potentially involve any organ or system. Serositis including pericardial, pleural or peritoneal membranes can lead to fluid accumulation, adherence, and even fibrosis. In a recent European study of 100 patients with SLE, the frequency of serositis was estimated to be 16% [4], with lupus peritonitis being the rarest.

The pathophysiology of PPMS is still not understood however it is suggested that an SLE phenotype which preferentially involves the serosa is responsible for the inflammation which may result in lympho-aggregation of plasma cells, immune complex deposition on the peritoneal membrane triggering a local inflammatory reaction or a vasculitic phenomenon involving the peritoneal vessels [5]. The presence of high ferritin levels (an acute phase reactant) also provides evidence to the underlying basis of this syndrome [6]. The pleural effusion can be explained by passive transfer of ascites through either trans-diaphragmatic route, lymphatic vessels or intracellular gaps, provided by the evidence that pleural effusion resolved when therapeutic paracentesis was done [1, 3]. Therapeutic control of SLE flare also settles the pleural effusion [1].

The elevation in the level of CA-125 in a patient with PPMS is a matter of concern. Considering the degree of inflammation in SLE, this can be explained as CA-125 is produced by mesovarium and omentum [7], so due to up-regulation of inflammatory mediators like interferon-gamma, Interleukin 1-b (IL-1b), Vascular endothelial growth factor (VEGF), and Fibroblast growth factor (FGF), it's synthesis is increased [8]. Few publications suggest that the diminishing of CA-125 levels after the resolution of serositis, explains a correlation between ascites and CA-125 elevation [9]. High levels of CA 125 can also occur in pelvic tuberculosis and nephrotic syndrome [10].

Our case describes a 23 year old woman with a past medical history of systemic lupus erythematosus, presented with rapidly increasing abdominal girth, facial/pedal edema, oliguria, and dyspnea, who was presumed to be developing pre-eclampsia in her 35th week of gestation based on hypertension and proteinuria, on a background of her family history. She was managed by an emergency Cesarean-section, and an incidental finding of peri-operative ascitic fluid was obtained (which was exudative), and a right-sided transudative pleural effusion. Upon further investigations, her CA-125 levels were found to be elevated. Her anti-double-stranded DNA titers were increased whereas complement levels (C3 and C4) were reduced indicating SLE flare. All these features suggested the diagnosis of pseudo-pseudo meig’s syndrome, a rare condition associated with SLE. It is asserted that her pregnancy triggered the lupus flare.

Treatment options of PPMS include treating the underlying SLE by steroids usually in the pulse dose followed by the maintenance therapy [11]. Anti-CD 20 monoclonal antibodies like rituximab also have a role in the treatment of refractory ascites based on its pathophysiology and involvement of pro-inflammatory cytokines [12].

Ethical approval was not required in this study from the institutional review board, and consent to participate has been taken from the patient’s guardian with informed written consent.