Hypermobile Ehlers-Danlos Syndrome (hEDS) is a genetic disease that is hard to diagnose. The diagnosis relies solely on clinical features due to the lack of a diagnostic test. It is characterized by a high level of pain and fatigue, as well as instability of the body, affecting the quality of life. The variability and the invisibility of the symptoms have an impact on the psychological well-being and behaviour of the patients, and make the situation difficult to understand by their relatives. We report here the case of several family members affected by hEDS, showing psychological symptoms often found in hEDS patients. Adopting a multidisciplinary approach, both physical and psychological, is decisive to more efficient medical and global care.

Ehlers-Danlos Syndromes (EDS) are a heterogeneous group of hereditary connective tissue disorders characterized by joint hypermobility, skin laxity and tissue fragility. Their prevalence is estimated at 1/5000. The 2017 International Classification of the EDS defines 13 subtypes, due to gene mutations encoding connective tissue structural proteins or enzymes involved in their metabolism [1].

Hypermobile EDS, the most frequent type (more than 80% of patients with EDS), is defined by diagnostic criteria [1]. Genetic transmission most often has an autosomal dominant pattern. The diagnosis relies solely on clinical features due to the lack of a diagnostic test. The patients show repeated sprains and dislocations which cause functional consequences leading to disabilities. They also suffer from chronic pain and fatigue, affecting their quality of life [2, 3]. Other clinical features are often found in hEDS patients such as pulmonary, abdominal, neuropsychological, cardiac, gynecological or bladder and sphincter-related symptoms [4, 5].

Hypermobile EDS is poorly understood by health professionals, which frequently leads to medical wandering, and alternative diagnosis are frequently initially wrongly made. These situations are especially hard to cope with by the patients because of the misunderstanding they are facing and the impossibility to move forward. The medical wandering, chronic pain and fatigue are known to have psychological consequences [6, 4, 7]. We report here the case of several members of a large family affected by hEDS and showing psychological features arising from the diagnosis’ annoucement, lack of recognition and chronic pain.

We received a 44-year-old female (patient II1) in the Non Vascular Ehlers-Danlos Reference Center for a suspicion of hypermobile EDS (hEDS). Her clinical history and her medical examination led to a hEDS diagnosis according to the 2017 International Classification of the Ehlers-Danlos Syndromes [1]. She reported that her siblings, her children and several of her nephews and nieces also displayed symptoms. Consequently, we decided to meet the family members who had suggestive symptoms (Figure 1).

The diagnosis of hEDS was confirmed for three of this patient’s nieces : III5, III7 and III9. However patients III2 and III8 did not meet enough criteria to reach a hEDS diagnosis. Moreover hEDS diagnosis was excluded for patients II3, II5, III1, III3, III6, III10. Patients IV1 and IV2, aged 3 and 6, displayed joint hypermobility and will have to be reevaluated later. Patients I1, I2, II7, III4, and III11 were not examined. 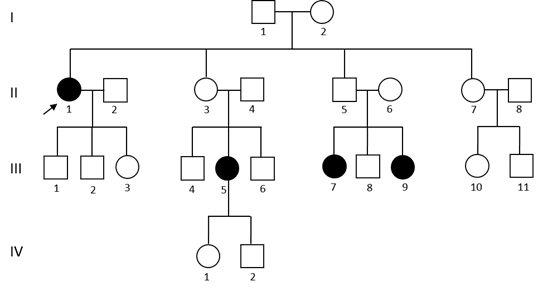 Some family members have met the psychologist after their medical consultation. For patients II1, III5, III7 and III9, the diagnosis, with the recognition of their symptoms and a feeling of being understood, came as a relief [8]. The diagnosis allowed them to recognize and deal with their limits. Patient III7 accepted her weaknesses and difficulties to manage her daily life. Interestingly patient II2, who was seen independently of his wife, (patient II1), had a less positive reaction because he suddenly had to give up any hope that the symptoms might lighten or disappear. He also mentioned a fear of the future. Patient II3 had also suffered from chronic pain for a long time. Her hope of getting a hEDS diagnosis was deceived and she tended to show depression symptoms. The impossibility to make a hEDS diagnosis would extend the period of medical wandering, which idea was difficult to bear for her.

Diagnosed patients suffered from chronic pain and fatigue which could vary in intensity depending on multiples factors. They also suffered from a lack of credibility due to the invisibility and variability of the symptoms. They developped very different strategies to deal with their symptoms. Patient III7 showed hyperalgesia (increased sensitivity to pain) and a predisposition toward somatosensory amplification (a tendency to perceive normal somatic and visceral sensations as being relatively intense, disturbing and noxious). Thus, she would have needed to adapt her school hours to her physical condition, which was not accepted by the university staff. This led to the interruption of her studies. Patient III5 had high scores of kinesophobia (apprehension of movement), this factor hindering rehabilitation and actually prolonging disability and pain.

On the other hand, patient III9 spontaneously developped fatigue management strategies, according to its intensity, for example by resting in anticipation of a trip or a planned outing. She noticed that even if she felt fine, she should not exceed a given threshold regarding the intensity of physical activities.

All four diagnosed patients admitted that chronic joint instability and proprioceptive disorders induced a feeling of not being in control of their body and gave them a strong feeling of insecurity and fear. Patient III7 was ashamed of it, which lead to social exclusion. Patients II1 and III7 consequently developed feelings of anger, which did not seem to affect their relatives.

Illness seemed to have a big place in this family, where they all tended to compare their symptoms and diagnosis to each other’s. Family dynamics played an important role on each patient’s disease management. The relatives’ behavior also impacted the way the patients dealt with their illness. For example, patient II1 mentioned that her daughter acknowledged her sufferings only when the disability became visible, which lead to complicated mother-daughter relationships. She then needed a lot of care and attention from her husband, who was her caregiver and very present at home. He tried to not become overprotective, especially since his wife came to be quite demanding and difficult to handle. He admitted it was not always easy and was aware of how important it was that he took time for himself.

Although genetic diseases usually expose relatives to specific feelings of guilt due to the hereditary characteristic of the illness, in this family, patient II5, (father of patients III7 and III9), did not feel guilty for transmitting the disease to his daughters. His daughters were not resentful towards him for transmitting it. His wife (II6) generally tended to prioritize her two sick daughters and to ignore her own needs and limits. She confessed that it could eventually lead to resentment or anger. Patient III9 stressed that her parents’ attention was focused on her sister who was more affected than her and that she felt neglected. She experienced the typical difficulties of having a sick sibling, even though she had been diagnosed with hEDS too. She expressed that her brother developed the same feeling of lack of parental attention.

Chronic pain and fatigue are the most challenging features of hEDS. The invisibility and variability of the symptoms exacerbates others’ misunderstanding of the disease and contributes to a lack of social support [9]. In the school and work environments, the understanding of the principals and employers can vary highly, as sadly experienced by patient III7. Any deschooling should alert doctors, especially as it is often detrimental to health and wellbeing [10]. In case of abnormal fatigue, health professionals should look for an associated pathology, such as dysautonomia. Therapeutic education is essential to help the patient develop strategies for managing fatigue. When they manage to do so, they substantially improve their management of pain and fatigue in the long term, a situation stressed by patient III9.

However among the patients visiting the non-vascular EDS National Reference Center, and in particular in this family, patients such as II3, whose hEDS diagnosis has not been confirmed, tend to show more depression symptoms than patients diagnosed with hEDS. The impossibility of making an hEDS diagnosis for her extended the period of medical wandering. Studies show that anxiety and depression are linked to chronic pain and decreased functionality, independently of the EDS diagnosis [4, 7].

Indeed our experience shows that patients’ psychological difficulties are more related to fatigue and the genetic transmission of the disease than to the diagnosis itself. When the hEDS diagnosis can be confirmed, the patients seem to be less anxious or depressed.

The diagnosis puts the family into a long-term perspective [11]. Most relatives worry about the future of the child or of the sick parent. The illness of their relative confronts some of them to their helplessness which results in specific defense mechanisms. Patients could interpret it as aggress-iveness or indifference. Other relatives become overprotective contrary to the patient’s wish, since the child or relative with hEDS often appreciate it when they are given a chance to be independent.

Genetic transmission of hEDS most often has an autosomal dominant pattern with a theoretical risk of transmission of 50% to each child [1]. Unlike patient II5, most of the parents feel guilty of transmitting the disease to their children, even though they do not feel responsible for it. However, they are never resentful toward their own parents for transmitting it to them. Unlike their own parents, the future parents now know that they have hEDS and that their illness is genetically transmitted. This knowledge accentuates their guilt in having potentially ill children and raises a lot of questions.

The doctor answers their questions and guaranties the child will receive well- adjusted medical care if needed. We notice that sometimes the sick child can feel a special “link” with the sick parent, creating mutual understanding from which the healthy child can feel excluded. This adds to the typical difficulties of having a sick brother and sister, experienced by patients III9 and III8. Their symptoms force patients to modify or restrict their behaviors and activities [9], as for patient III7. The first step for her was to accept what she couldn’t do anymore while being aware of everything she could still do. These remaining abilities were valued and built upon. Once she accepted her limits and capabilities, she was able to accept being helped. Hypermobile EDS is a disease that can lead to disabilities.

Patient II1 had worries regarding the future and particularly the evolution of her physical abilities, especially since she occasionally used a wheelchair. She was aware that consulting a psychologist could help her manage her fears. When the patient apprehend the future more positively, the evolution of the symptoms is in favor of an improvement of his global well-being; he surrounds himself with helpful relatives, feels less excluded, has a better acceptance of his body and of the way others look at him, is more proactive in finding helpful solutions and taking better care of himself.

In conclusion, this family is highly reprensentative of the psychological difficulties hEDS patients, and their families, meet. Hypermobile EDS is a rare genetic disease leading patients through a long period of medical wandering. Patients suffer from chronic pain and fatigue.

The variability of the symptoms makes the situation difficult to understand for relatives, who can have a hard time adopting the right attitude. Taking a multidisciplinary approach, both physical and psychological, is decisive to the long-term efficiency of the care.

The authors declared no conflicts of interest with respect to the authorship or the publication of this article.