Brain stones are a rare form of intracranial calcification. They are defined as large, well-circumscribed foci of pathological calcification and can be classified according to location and aetiopathology. Clinical history and imaging are principally used to narrow the differential in the absence of a tissue diagnosis. We report the highly unique case of a 47-year-old female patient who presented following a witnessed tonic-clonic seizure, preceded by worsening neurological symptoms. Blood tests were unremarkable however imaging demonstrated multiple, large, discrete areas of bony hard calcifications that were distributed exclusively within the left cerebral hemisphere - a localisation characteristic that is unreported in literature to date.

In the initial clinical work-up of a patient presenting following a first seizure, computed tomography (CT) and magnetic resonance imaging (MRI) of the brain play a pivotal role. Differentials that can be evaluated on neuroimaging imaging include: stroke, post-traumatic sequelae, haemorrhage, neoplastic, mesial temporal sclerosis, malformation of cortical development, cavernoma and perinatal insult [1]. Several reviews have also demonstrated the value of MRI, beyond that of CT in identifying epileptogenic lesions with a greater sensitivity [2]. The numerous causes of intracranial calcifications (both physiological and pathological) are also well documented in the literature [3] however little is known regarding the rare finding of brain stones and the determinants of their development.

A 47-year-old Portugese female patient initially presented to our Emergency Department in February 2020 after experiencing her first seizure. The London Ambulance System (LAS) conveyed this patient to our department after the seizure self-terminated where she underwent a thorough clinical assessment. The patient revealed a two-week history of a predominantly frontal “band like” headache which she had never experienced before. This headache was persistent and would intermittently worsen in severity over the course of the two-week period. It would often start upon waking in the morning and at its worst, last up to four hours. Simple analgesics including paracetamol did not provide any symptomatic relief. There were no other pathognomonic features that would suggest the aetiology of this headache was related to migraine, raised intracranial pressure, or meningism. This patient denied any history of foreign travel or fever. Of note, she revealed a 3-month history of blurred vision. No recent eye tests were reported and she did not wear glasses. There was no notable past medical or surgical history.

The generalised tonic-clonic seizure was witnessed by her husband who observed the patient lose consciousness before noting rhythmic jerking movements of the upper and lower limbs. He also reported associated tongue biting and urinary incontinence. The seizure lasted approximately five minutes before self-terminating. The patient, who was described as being in a post-ictal phase following the seizure, was then placed into recovery position before an ambulance was called. On assessment by paramedics, the patient had no memory of these events, remembering only the moment at which she was asked to open her mouth (which revealed blood from having bitten her own tongue).

On examination, her observations were all within normal range, with a normal cardiac, respiratory and abdominal examination. She also had a normal central nervous system examination, peripheral nervous system examination (including both upper and lower limbs) as well as a normal cerebellar examination. Fundoscopy was also unrevealing. Initial blood tests were largely unremarkable with a normal full blood count, renal function and bone profile. Notably, the serum sodium, adjusted calcium and magnesium levels (significant derangements of which can potentially precipitate seizure activity) were all normal at 139 mmol/L, 2.47 mmol/L and 0.80 mmol/L, respectively. Curiously, there was no elevation in lactate on the venous blood gas.

An unenhanced CT examination of the brain by a 64-slice CT scanner was performed. The protocol included a non-contrast CT scan with a 1mm slice thickness. As demonstrated in Figure 1, multiple extra-axial solid calcifications were found to be scattered throughout the subarachnoid space of the left cerebral hemisphere. The largest, measuring 2.4 cm in length and 0.8 × 0.9 cm in cross-section, was noted to be occupying the large part of the left sylvian fissure. A gadolinum-enhanced MRI was also performed for further evaluation of aetiology. Figure 2 illustrates the diffusion-weighted imaging sequence of the MRI which illustrates signal dropout at the cortical areas corresponding to the site of the brain stones. There was no abnormalities detected in the post-contrast images, in-keeping with a diagnosis of ‘benign brain stones’.

Figure 1: Unenhanced CT scan of the brain from Febraury 2020 illustrating multiple extra-axial calcific densities (‘brain stones’) in various of the L cerebral hemisphere; the largest occupying the posterior part of the left sylvian fissure and others distrubted peripherally. 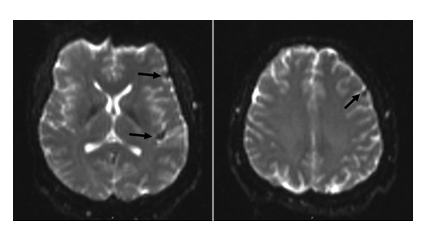 Figure 2: Diffusion weighted images from an MRI scan of the brain from Febraury 2020 illustrating signal ‘drop-out’ in the corresponding areas of the L cerebral hemisphere where brain stones were detected on CT imaging.

Following review by the in-patient neurology team, this patient was initiated on levetiracetam 250 mg BD, to be up-titrated following two weeks to 500 mg BD.

Brain stones, also known as cerebral calculi, are a rare phenomenon. They can be classified according to their aetiology and distribution. Brain stones is the general term used to refer to “large, solitary or multiple, well circumscribed bony hard areas of pathological calcification” [4]. Intracranial calcifications are commonly reported in the literature however the finding of brain stones is less frequently encountered. Both phenomena are commonly detected incidentally or following either sudden neurological disturbance (e.g. a seizure) or progressive neurological symptoms (persistent worsening headaches or visual changes) [5].

Primarily, brain stones are classified on the basis of their location, i.e. whether they are intra-axial (within the parenchyma of the brain) or extra-axial (external to brain parenchyma). Whilst extra-axial stones typically arise from tumours or exaggeration of physiological calcification, the differential for intra-axial stones is vast and can be further classified according to aetiogenesis: neoplastic, vascular, infectious, congenital, endocrine or metabolic [6]. Meningiomas are an important cause of extra-axial brain stones with one study citing up to 60% of cases demonstrating some degree of macroscopic calcification [7]. Other pathological causes include dural osteomas (thought to be arising secondary to ossification of the fibrous dural coverings) and calcifying tumours such as craniopharyngeomas. Physiological calcifications that can affect numerous cortical areas including the pineal gland, habenula, basal ganglia and the dural coverings can, if accentuated, can give the appearance of brain stones [6].

Typically, brain stones are undetectable on plain skull x-rays due to the amount and configuration of calcium salts they contain. The superiority of CT in detecting intracranial calcification as compared to plain film imaging has resulted in CT being commonly used to quantify calcification. CT is also considered to be better than MRI in identifying and characterising intracranial calcification. However, T2-weighted MRI imaging has shown to correlate better with clinical symptoms than with CT identified calcifications. Hence, evaluation with both imaging modalities is recommended [8].

This particular case is of significant interest due to the finding of multiple, discrete brain stones that were distributed solely across a single cerebral hemisphere. All cases identified in the literature to date have reported either a singular focus of dense calcification or multiple scattered foci that are not restricted to a single cerebral hemisphere [3]. Furthermore, whilst it’s uncommon for brain stones to manifest with a seizure; their location in such circumstances is almost always intra-axial as opposed to extra-axial. In addition to this, the majority of patients with brain stones are asymptomatic and as a result, often go undiagnosed. The median age of symptomatic patients who do present is 70, with the finding rarely reported in patients under the age of 50 [9].

Treatment for brain stones is often limited to anti-seizure medication in the majority of cases (as in our patient). In highly symptomatic individuals, surgical resection is a potential alternative however total resection is rare due to the potential for complications and so the symptomatic mass is often removed with close follow-up in case of need for further neuro- or radiosurgery [10].