Background: The dimensions of the styloid process (SP) coming from the temporal bone normally measure 2.5 cm in length. An elongated SP generates compressions on adjacent structures, developing unspecified presentation symptoms such as facial pain, sore throat, earache, dysphagia and headache among the most common, known as Eagle Syndrome (ES). When conservative management fails, intervention or surgical options are sought. Ultrasonography is an accessible, safe tool, avoids radiation, and is an effective technique that allows SP identification by guiding the application of local anesthesia (LA) and a steroid. We describe the case of a 45-year-old female patient with ES whose conservative treatment failed, and who was subsequently subjected to an SCPB and steroid injection, and LA in the SP USG-guided with adequate pain management. Likewise, ultrasound-guided (USG) superficial cervical plexus block (SCPB) is a suitable option, which involves its mastoid, auricular transverse, supraclavicular rami and its anastomotic rami.

Case study: We describe the case of a 45-year-old female patient with ES whose conservative treatment failed, and who was subsequently subjected to an SCPB and steroid injection, and LA in the SP USG-guided with adequate pain management.

Conclusions: USG-guided SCPB and SP infiltration is a treatment option for ES patients.

ES was described by Dr. W. Eagle in 1973, an otorhinolaryngologist, in a report of 2 patients with improvement in symptoms following styloid reduction surgery [1]. ES is an uncommon condition, most patients may be asymptomatic; however, when the styloid apophysis elongation or the stylohyoid ligament calcification exert pressure on different structures that can generate a wide range of symptoms, characterized by dysphagia, odynophagia with irradiation to the jaw, ear or neck, painful movements of the tongue, voice changes, increased salivary secretion, earache and headache [2]. The styloid apophysis is surrounded by several important neurovascular structures and projects in a caudal, medial, and anterior direction to the maxillary-vertebral pharyngeal recess where the carotid arteries, the internal jugular vein, and the facial, vagus, and hypoglossal nerves are located. The length of the styloid varies widely, with values considered normal between 2.5 and 3.0 cm, patients with ES have an elongation greater than 3.0 cm [3]. The ES diagnosis is a clinical diagnosis and is made based on a combination of symptoms, a physical examination and radiological evidence. Conservative therapy includes Non-Steroidal Anti-Inflammatory Drugs, opioids, carbamazepine, gabapentin, and infiltration of steroidal drugs or local anesthesia, in most of the cases injections are given based on reference points to access these nerves, or guided by fluoroscopy with contrast confirmation [4]. The advantage of using USG is the ability to identify vascular structures and decrease radiation times. However, long-term remission usually requires surgical treatment with partial resection of the styloid apophysis through a transoral or extraoral approach. SCPB provides effective anesthesia and analgesia in the head and neck region [5-8]. As the role of ultrasonography has expanded in the head and neck region, an SCPB can be safely and accurately performed, thus achieving visualization of muscles, cervical vertebrae, large vessels, nerves, and neck fascia [9]. The cervical plexus is located in a groove between the long muscle of the head and the middle scalene muscle. The nerve rami formed by the union of the anterior spinal nerves C2-C4 emit four superficial sensory rami in cranial-caudal order: lesser occipital (C2,3), greater auricular (C2,3), transverse cranial nerves (C2,3) and supraclavicular (C3,4), which perforate the prevertebral fascia and migrate to superficial structures of the neck, skin, subcutaneous cellular tissue, posterior face of the head and shoulders through the sternocleidomastoid muscle. In contrast, the fibers that emanate anteromedially from the upper (C1-C2) and lower (C2-3) roots join together at the level of the omohyoid central tendon to form the ansa cervicalis. The anterior rami of C3 and C4 combine with C5 to form the phrenic nerve (Figure 1). The cervical plexus is known for anastomosing with the accessory spinal nerve, hypoglossal nerve, facial nerve, vagus nerve, glossopharyngeal nerve, and sympathetic trunk [10]. 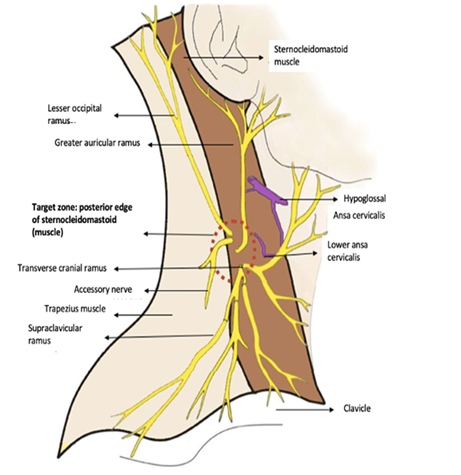 A 45-year-old woman, who started two years ago with stabbing neck pain, otalgia, jaw pain, dysphagia, and oppressive pain at the level of the left-side of the trapezius muscle. She was treated by the Otorhinolaryngology and Orthopedics services with gabapentin and non-Steroidal Anti-Inflammatory Drugs with no clinical improvement. Thorough physical examination was performed at the Neurosurgery department. Upon touching her neck on the left-side, and flexion and extension cervical movements, she experienced severe pain, and upon touching her left tonsil base, pain was triggered on neck, ear, and ipsilateral jaw with irradiation to the trapezius. A computed tomography was ordered with third-dimensional reconstruction, in which prominent styloid processes were reported on both sides, right process being 4.96 cm, and left process 4.83 cm (Figure 2). 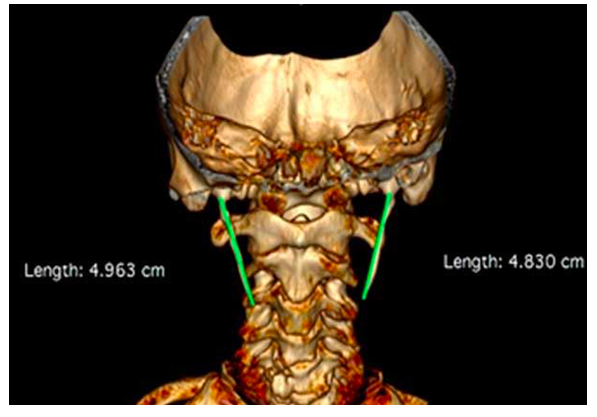 Figure 2: Computed tomography with third dimensional reconstruction where styloid processes of increased dimensions are seen on both sides

In conjunction with the image study and physical examination, the ES diagnosis was integrated. Multidisciplinary treatment was offered at the Neuroanesthesiology service. The infiltration of local anesthesia and steroid on SP and the performance of SCPB, both eco-guided, were decided. After the informed consent was signed, the patient was placed in supine position with a slight tilt of the head to the right, following asepsis and antisepsis of the mastoid process, the sonication was performed axially with a 15 MHz linear transducer from SonoSite M-Turbo (Bothell, WA, USA). In a caudal and oblique direction, the SP was identified 2 cm from the skin, and the transducer was then rotated to obtain a longitudinal view of the SP. Prior to insertion of the needle, in the Doppler color flow mode the internal jugular vein and internal carotid artery were identified (Figure 3). With a 25G-gauge 50-mm needle (B-Braun Melsungen AG Stimulex Ultra 360, Germany) the styloid process was approached with an out-of-plane technique. Hydrodissection was performed with 0.5 ml of 0.9% saline solution and finally 1 ml equivalent to 10mg of triamcinolone and 4 ml of 0.2% ropivacaine was administered. During the same approach, the posterior edge of the sternocleiodomastoid muscle was identified, as well as the nerve roots of the superficial cervical plexus below the muscle at C4 level (Figure 4) where 6ml of ropivacaine were administered at 0.2%. At the end of the procedure, total pain suppression was achieved and confirmed with inhibition of response to previously identified algic stimuli. 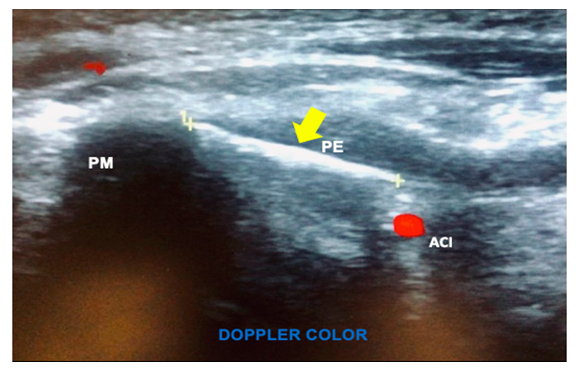 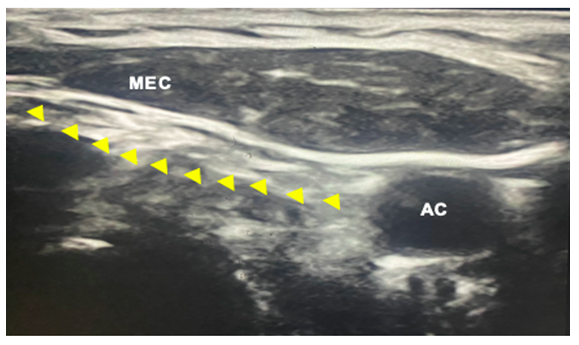 Figure 4: Ultrasound image in two dimensional mode where the nerve roots of the superficial cervical plexus can be seen with yellow triangles below the sternocleidomastoid muscle (MEC) and parallel to the carotid artery.

Due to the anatomical location of the SP between the mastoid process and the jaw, the sonication window is small, easily achieving its identification by modifying the gray scale in the ultrasound, thus highlighting the bone hyperechogenicity. The internal carotid artery and vein below the SP can easily be identified with color Doopler, avoiding vascular injury, as well as side effects from intravascular absorption of local anesthesia, and hematomas. It is important to note that performing this eco-guided procedure gives us the benefit of seeing in real time the needle path and position, the drug diffusion and a higher success rate in pain suppression. According to the results of Liu et al, the time to complete infiltration for glossopharyngeal neuralgia with USG versus X-ray or tomography was 7 to 12 minutes and they obtained satisfactory results in patients who had received treatment with radiofrequency ablation and microvascular decompression [11]. This treatment has the advantages of being performed in a short operating time and is highly effective, being feasible in an outpatient surgical setting; however, studies are currently lacking to identify the average time of effectiveness of long-acting steroids. This method is effective in the treatment of glossopharyngeal diseases, fibrotic compression and local scarring in SP [12-14]. The accessory, hypoglossal, vagus and glossopharyngeal nerves are found medial to the SP along with the sympathetic chain, the glossopharyngeal nerve provides sensory information from the pharynx, posterior area of the tongue, middle ear, parasympathetic innervation of the parotid gland, and the sensation of taste of the posterior part of the tongue [15]. Because of the location and function of the glossopharyngeal nerve, ultrasound-guided block is becoming increasingly popular among anesthesiologists and pain management physicians. The USG glossopharyngeal nerve block via the SP technique has been described with satisfactory results in multiple studies [15-17]. The importance of SCPB lies in the fact that it is a less invasive technique to manage pain of cervical origin, its topographical correlation and its confluence of superficial rami of nerves that transmit somatic pain in areas of the neck and face (C2-C4). There are multiple reports of its applicability in patients with anterior neck, face, and jaw pain [18,19]. In addition, as the use of the USG in the head and neck region has extended, these techniques described above can be performed more safely and accurately. It should be noted that conservative treatment is reserved to the rejection of surgery and notification must be given of mainly vascular neurological risks, styloidectomy represents the highest success rate and low rate of postoperative complications [20].