1Key Research Base of Humanities and Social Sciences of the Ministry of Education, Academy of Psychology and Behavior, Tianjin Normal University, Tianjin, China

3Center of Collaborative Innovation for Assessment and Promotion of Mental Health, Tianjin, China

Information that is initially presented as true but later identified as false and explicitly retracted often continues to influence people’s cognition, and this persistence is termed the ‘continued influence effect of misinformation’ (CIEM) [1-8]. We can easily get a lot of external information every day with the development of new media. At the same time, the number of misinformation is increasing gradually. For example, misinformation about the origin or the treatments of COVID-19 has come [9]. Although this misinformation has been corrected or denied subsequently, the misinformation sometimes still affects the general public’s cognition of the relevant things or people. Misinformation already outraces the truth on Twitter [10]. The study for the CIEM can help us find a way to reduce the negative effects of misinformation on cognition and form accurate judgments [11].

Most studies on this topic focus on retraction methods [2,5,12-17] and motivational factors [1,18-20]. These studies have shown that retraction can reduce reliance on misinformation but cannot eliminate it, and one’s intrinsic motivation would impact on retraction processing. For example, Swire et al. [7] employed short passages on scientific knowledge selecting from websites such as new scientist, scientific American, etc., to investigate the role of familiarity in correcting misinformation. Participants received either a brief or detailed explanation in the study. Results indicated that detailed explanations better elicit belief change than brief explanations. Familiarity may contribute to the false acceptance of corrected myths as true, which supports the notion that familiarity is indeed a driver of continued influence effects.

Authors proposed that information relevance might be another important factor in the CIEM. Walter and Murphy

Rothman and Schwarz [23] investigated the effect of the personal relevance of information on health judgments. Participants were asked to list either the increasing or decreasing risk of developing heart disease. The manipulation of relevance was that half of the participant’s listed risk factors that pertained to themselves, and the other half listed factors that pertained to ordinary people [23]. Following this, participants need to finish five questions such as

“the need to change their current behavior to reduce the risk of developing heart disease”, along with 9-point Likert scales (1 = no need, 9 = need). The results showed that health judgment was different with different relevance. Participants reported greater vulnerability after having recalled three risk-increasing factors when information is not self-relevant, while they reported greater vulnerability after having recalled eight risk-increasing factors in self-relevant condition. Moreover, other studies also provide indirect evidence from the view of “relevance” and “involvement”. For example, processing high-relevant information may induce greater individual involvement because of its greater impact on life [24-26]. To date, less attention has been paid to the effects of misinformation relevance on the CIEM.

The CIEM has been replicated across both a wide variety of news stories (e.g., a warehouse fire) [2,4-6,8,14] and scientific knowledge of physics or biology (e.g., a meteor or bull) [7,12,15,17,27]. Compared with fictional news stories or physical knowledge, the misinformation related to daily life events (misinformation of COVID-19, health, food safety, etc.) may have a closer relationship with people. Using daily life events (i.e., high-relevant misinformation) to explore the CIEM may have higher ecological validity and more social significance.

This study was run from March 10 to 14, 2020. 2864 participants living in 28 provinces in China filled out the questionnaire. The survey was organized by online and followed the principle of voluntary participation. The final sample consisted of 2522 participants (mean age = 22.1 ± 11.52, 1099 males).

The survey included demographic questions and information evaluation. Demographic questions consists of sex (0 = female, 1 = male), age, education (1 = primary and below, 6 = graduate and above), the only child (0 = no, 1 = yes), health condition (1= good, 5 = poor), regional classification of the epidemic situation (1 = mildly epidemic area, 5 = severe epidemic area). In the information evaluation, we selected a list of 12 false and 2 true information relating to COVID-19. The misinformation is widely spread during the March epidemic and subsequently corrected in various media, such as “Eating more strawberries has a great effect on preventing COVID-19”. The true information used as filler materials. Participants were asked to rate four items for each information: 1) familiarity, 2) relevance (how relevant the information is to you), 3) believability (the first seeing), and 4) believability (now). All evaluation adopted 6-point Likert scales, and the higher scores indicate the deeper of extent. In the current data, the internal consistency (Cronbach’s coefficient) reliability of all four evaluations was 0.95.

As mentioned above, the difference of belief judgments was used as the dependent variable in the following analysis. The correlations were based on participants’ average ratings across the 12 statements. Table 1 presents the

correlations for all variables. The results showed that demographic information (sex, age, etc.) was not related to the difference of believability (ps > 0.05), indicating that the demographic information does not affect the retraction effect or the CIEM. Difference of believability was significantly positively related to familiarity (r = 0.07, p < 0.001) and relevance (r = 0.05, p < 0.05), indicating that the more familiar with the information, the larger the CIEM. And when participants thought the information was more relevant to themselves, the harder to retract it (i.e., the larger CIEM).

Table 1: Correlations for all included variables

However, the internal validity of this online survey is relatively low, though it has higher ecological validity. Although the retraction information for all misinformation included in the questionnaire had been widely published and spread by various media before our survey was conducted, we could not provide convincing evidence that each participant had read the retraction information. Besides, we acknowledged the limitation of using a retrospective self-report study to draw firm conclusions about participants’ tendency to experience CIEM. Due to these limitations, the conclusion that information relevance can affect the CIEM drew from study 1 need to be further validated by a more strict experiment. So study 2 further employed a typical paradigm in the CIEM to examine the impact of information relevance on the CIEM.

A priori power analysis (G*Power 3.1.9.2) using a small-to-medium effect size f = 0.20, with α = 0.05 and 1 − β = 0.80, and a moderate correlation between repeated measures of r = 0.50, indicated that 36 participants should be recruited 2]. Given this experiment consist of two types of misinformation and the potential for incomplete or missing data, 80 healthy undergraduates participated in the experiment. Two participants were excluded as they did not complete the task. Our final sample thus included 78 participants (34 males) between 18 and 22 years of age (M

= 19.63, SD = 1.13). The study was approved by the Tianjin Normal University Psychological Experiment Ethics Committee. All participants had signed an informed consent form and received a small remuneration for their participation.

Materials included two parts. Forty items (20 facts and 20 myths) on some knowledge of physical or biological were selected from Swire et al. [7], which was initially from websites such as new scientist, scientific American, etc. Familiarity and believability of the items were rated before the experiment in Swire et al. [7]. Six native Chinese- speakers made minor revisions of the descriptions of these materials to make them more intelligible for Chinese participants. Given that our participants were undergraduate students, we believe that the possible campus life events were more closely related to themselves. So another part of the materials made by authors, who were selected from the Internet, students, and counselors self-report. A total of 40 items (20 facts and 20 myths) that undergraduates often pay attention to or contact with in their lives were made.

A pilot study was conducted before the formal experiment to select high- and low-relevant items and control the influence of familiarity. Twenty-six undergraduate students (10 males, ages 18-25 years, M = 20.31, SD = 1.64) took part in the pilot study and didn’t participate in any of our formal studies. Participants indicated (1) the extent to which they familiarized each item from “definitely unfamiliar” to “definitely familiar” and (2) the extent to which they think the information in each item relating to themselves from “totally unrelated” to “totally related” on

Each item included an initial statement with a pre-manipulation belief rating, followed by a corresponding brief or detailed explanation, two inference questions, and a post-manipulation belief rating. The brief explanation simply stated whether the item was a myth or a fact without any further information, while the detailed explanation provided further clarification with three or four sentences [7]. Example items were presented in Table 2. Each item had two versions of explanations: brief and detailed. Participants were randomly assigned to one of the versions.

Table 2: Example of the high-relevance and low-relevance items.

All participants were instructed to read a series of messages. The experiment was conducted via E-prime 2.0. Each trial started with a fixation cross (500ms) and was followed by an initial statement with a pre-manipulation belief rating. Participants were instructed to indicate the extent to which they believed in each item on a 1-9 scale by pressing the corresponding number keys on a keyboard. After the rating, participants received either a brief or a detailed explanation, and then they indicated on two successively displayed inference ratings with the same 9-point scale. In the end, the belief rating was presented again (Figure 1). During the experiment, all the readings and ratings were self-paced, and the computer recorded the ratings. The program will prompt the participants to rest once and press “J” to continue. 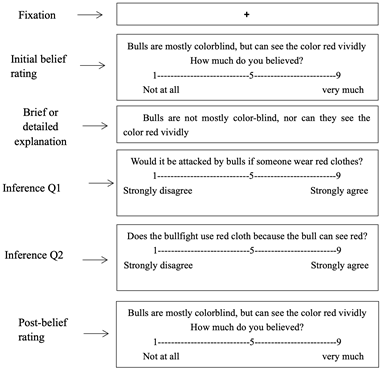 Figure 1: Illustration of procedure for the misinformation task. 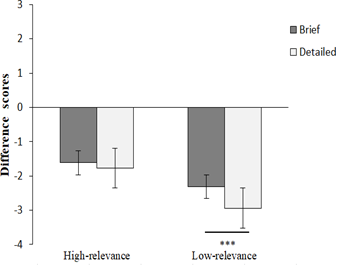 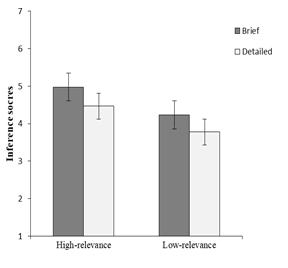 Study 2 demonstrated that the CIEM varies with misinformation relevance by experimental manipulation.

In sum, no matter what kind of measurement and retraction were applied, it is found that the CIEM in high-relevant condition was greater. Besides, the different effects of information relevance were also found in the interaction. So this result again demonstrated the importance of misinformation relevance.

This explanation seems compatible with speculation based on the mental model account of the CIEM. According to the mental model account, the existence of the CIEM relates to a mental model construction for an event. Individuals will construct a mental representation for an unfolding event when they first read its misinformation, and struggle to retain a coherent understanding of that event [5,34]. The subsequent retraction can undermine the internal consistency of the initial mental model about that event [5,35]. People prefer an incorrect but complete model to an incomplete model [14,34]. The initial high-relevant misinformation, which is closer to an individual’s life and higher personal involvement than low-relevant misinformation, facilitates the detection of conflicts between initial misinformation and correct information. Individuals will strongly realize that the retraction would break the consistency of the existing model about the event, and make more efforts to prevent integration of correct information into the model, resulting in a larger CIEM.