The Susceptibility of Swine Abortion-Associated Leptospira hyos to Disinfectants

Leptospirosis is a globally important zoonotic disease which is reportedly caused by the pathogenic spirochetes of the genus Leptospira [1]. As a disease with sporadic in nature, leptospirosis is reported as an under-diagnosed disease in developing countries like the Philippines. Global warming that leads to extreme weather events such as cyclones, floods, increased rainfall, increased world population and urbanization are considered as the factors associated with upsurge in the incidence of leptospirosis [2]. Leptospirosis outbreaks usually happen during the rainy seasons in tropical regions and in late summer to early fall in temperate regions, but most of the time, outbreaks follow periods of excess rainfall [3].  The pathogenic leptospirae enter their reservoir hosts like rats, infect the renal tubules of these animals and are readily shed in the urine of these hosts. The release of the pathogen in the environment, in moist soil and surface water where human activities related to animal farming, butchering, pest control and aquaculture render people and susceptible animals at risk for leptospira infection. Experts believe that Leptospira infection in pregnant sows is often unnoticed and is only recognized when infections advance which are often accompanied by successive cases of abortion in production areas [4]. Unwittingly, the accessibility of Leptospira rat vectors on detritus from aborted sows in a farm with faulty rodent control may provide a portal for the transmission of leptospirosis between susceptible animals and among animal handlers in the same workplace, under favorable environmental conditions.  Leptospira pathogens may continue to have a major impact on the health of food-producing animals and on people who live in areas where control programs for Leptospira may not exist. The barriers to the control of leptospirosis are believed to be precipitated by inadequate diagnostic capacity, lack of concerted efforts to assess the impact of leptospirosis on animal health and limited research that explores control and treatment measures against the pathogen. Identification of disinfectants that potentially eliminate Leptospira is deemed necessary in situations where plans for the prevention or control program against the infection are initiated. Effort to develop a control strategy against leptospira-associated abortion in swine production is wanting. A research-generated information directed to the identification of the most practical method of disinfectant application in areas of infection, in places where transmitters of the infection thrive and in flood-prone areas as control or preventive measure against the Leptospira pathogen is important.  Work on this may essentially provide a basis for giving a recommendation for a low-cost strategy that minimizes the transmission of pathogenic Leptospira.

2.1 Bacterial strains used in the study

Pure cultures of Leptospira hyos (Accession number MK629955) which was utilized in a previous study to evaluate its susceptibility to antibiotics [5] were recovered and used for this experiment.

The recovered samples were grown in replicated tubes that contained freshly-prepared Fletcher’s medium supplemented with 8% rabbit serum. The samples were kept in an incubator at 31ºC for 24 hours. When the growth of L. hyos in the culture medium was already indicated by the presence a dinger zone within the period of incubation, the samples were collected and washed by centrifugation at 3000 rpm for 15 minutes.The bacterial sediments in tubes were obtained in small aliquots (15 to 20 µL) and placed as smears on slides. The slides were stained using the procedures of others [6] with slight modifications. The smears were fixed in 1% formalin before the application of 5% Sodium Bicarbonate. About 10 drops of basic fuchsin solution was placed on the smear, allowing the stain to adhere on the smear for 5 minutes at RT. The slides were washed with water and allowed to dry before microscopic evaluation.

2.3 In-vitro evaluation on the susceptibility of Leptospira hyos to disinfectants

At the start of this experiment, sample sediments of L. hyos were obtained from replicated tubes before centrifugation at 12,000 x g for 2 minutes. Samples of the sediments were re-suspended in 5 mL sterile deionized water (Thermo Fisher Scientific, USA) for the evaluation of cell density using McFarland standards while most of the samples were obtained as the test organism for the evaluation of the pathogen susceptibility to disinfectants. The inability of L. hyos to form colonies on the surface of a solid medium required the need to lay fresh culture of the pathogen (4.33 + 0.57 MFU) in 1 mL Fletcher’s medium and monitor cell density (expressed in McFarland Units/MFUs) using McFarland standards. Five (5) different kinds of disinfectants obtained from local distributors, each with the 5 described different modes of action were used in the study (Table 1).

Table 1: Disinfectants used in the evaluation of L. hyos susceptibility to disinfectants.

Samples from each of the five aforementioned disinfectants (Phenol, Quaternary ammonium, Formaldehyde, Chlorine and Potassium alum) were separately obtained and dispensed in sterile tubes as pure preparations in 5-mL volumes at the start of the experiment. From each of these disinfectants, concentrations of 10%, 25% and 50% per mL of sterile deionized water (Thermo Fisher Scientific, USA) were separately prepared as solutions for the test.

For each concentration of disinfectant described, the disinfectant was added in 100 µL-volumes correspondingly to three replicated tubes that contained 1 mL Fletcher’s medium with a fresh culture of L. hyos suspension (4.33 + 0.57 MFU). McFarland readings were taken before disinfectant application and were used as reference in comparing the cell density of L. hyos recovered after exposure to the 5 different disinfectants which were set at different concentrations, for the 30-minutes and 1-hour experiment duration.

McFarland readings relative to the application of the 3 different concentrations of the 5 different disinfectants were expressed as mean McFarland units (MFU) of 3 replicates. Differences in MFUs as an effect of the application of different concentrations of disinfectants were statistically analyzed using LSD (Least significant differences) while differences in MFUs across time intervals (30-minutes and 1-hour) within treatments were analyzed by Students’ T-test (P< 0.01).

3.1.1 Morphology of the abortion-associated L. hyos: Result of the microscopic evaluation of L. hyos showed that the pathogen appeared S-shaped, short but some were moderately elongated with hooked or curved ends (Figure 1). The organism appeared dark pink to purple after application of the recommended stain. 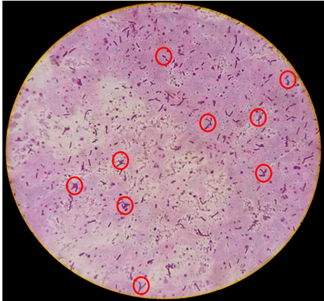 The time in monitoring the effect of the same disinfectants was extended for another 30 minutes to complete a 1-hour data. Data in Table 2 demonstrate nil L. hyos MFUs recorded and related with the appli-

The study explored the susceptibility of L. hyos to disinfectants as an adjunct procedure after determining the responses of the same swine abortion-associated pathogen to antibiotics [5]. Research-generated information are extremely needed in order to draw a basis in giving treatment in the form of antibiotics or as a disinfection control strategy in animal production units.

The study involved evaluation of the responses of L. hyos to a set of disinfectants that included phenol which inactivates bacterial intracytoplasmic enzymes; quaternary ammonium that impairs outer membranes of Gram-negative bacteria; formaldehyde that reportedly causes lethal interaction with bacterial protein and nucleic acids; chlorine that oxidizes bacterial sulfhydryl enzymes and amino acids; and potassium alum  that reduces the acidity of bacterial cell walls, all prepared at 10%, 25% and 50% concentrations, where bacterial cell densities were monitored post-exposure to the disinfectants as a measure to determine disinfectant action on the test pathogen at specified periods of observation.

The effect of disinfectants on leptospires was also tested in another study [11] which reportedly used 2 mL solution of calcium hypochlorite containing active chlorine in a concentration that ranged from 2 to 250 mg/L against one drop of a 4 to 6-day culture of Leptospira icterohaemorrhagiae or L. grippotyphosa in Korthof medium which were later determined by sub-inoculation and microscopic examination. In a similar experiment [12], 0.1% sodium hydroxide solution reportedly killed all the Leptospira spp. in 20 seconds.

There are no recent studies that described the susceptibility of Leptospira spp. to potassium alum. However, there are studies that describe the effectiveness of potassium alum in inactivating some Gram-negative and Gram-positive bacteria. In another study [13], it was reported that white alum was potent against Escherichia coli O157:H7 at a concentration above 1% which described the effect in a dose- and time-dependent manner. The work of other researchers [14] reported the effectiveness of bis-quaternary ammonium on hospital isolates of Pseudomonas aeruginosa based on bactericidal effects and toxicity in human epithelial cells using lactate dehydrogenase release (LDH). The study of other researchers [15] described the use of phenol compounds as anti-bacterials which exert antimicrobial activities that denature and coagulate proteins in a wide range of Gram-positive and Gram-negative bacteria.

The application of potassium alum against Leptospira hyos in this study is a new finding as the potential of potassium alum as a disinfectant is not widely explored. This is a chemical that can be acquired over the counter which can be applied as a disinfectant in farm premises at 10% MIC-defined concentration to minimize L. hyos infections that can be acquired through contamination of farm premises.

A report that discussed the susceptibility of the swine abortion-associated L. hyos to disinfectants with different mechanisms of action was made. The significant reduction of cell densities relative to the application of disinfectants at described concen-trations and at different duration of exposure, and the identification of the MICs of the disinfectants provide a basis in giving a recommendation for a control program against L. hyos in swine farms.

This work was undertaken with the assistance of the Veterinary Microbiology Section, College of Veterinary Science and Medicine, Central Luzon State University, Philippines.

No conflict of interest exists among the authors relative to the submission of this paper for publication.