Tophaceous Gout In a Patient of Thalassemia Intermedia: A Case Report

Thalassemia is an important hemoglobinopathy that poses a significant burden on the Indian health system. It has a prevalence of ~3-4 % in the Indian population. Thalassemia has an autosomal recessive inheritance and co-inheritance with haemoglobin variants like HbE is not uncommon. Here we present an interesting case of tophaceous gout in a patient of thalassemia intermedia.

Thalassemia is an important hemoglobinopathy that poses a significant burden on the Indian health system. It has a prevalence of ~3-4 % in the Indian population. Thalassemia has an autosomal recessive inheritance and co-inheritance with haemoglobin variants like HbE is not uncommon[1]. There occurs a defect in globin component in haemoglobin in red blood cells with resultant ineffective erythropoiesis and hemolysis[2].  Because of high cell turnover owing to chronic haemolysis, hyperuricemia is not uncommon[2]. However, presence of tophaceous gout, is distinctly unusual with only few isolated case reports available so far.

Here we present an interesting case of tophaceous gout in a patient of thalassemia intermedia.

A 31 year old male presented to medicine out patient department with complaints of multiple joint swellings involving first the little finger of right hand, followed by involvement of right 5th toe and later both ankles (Figure 1A-B). The swellings in right hand and feet were nodular, non-tender, hard in consistency and non-mobile without any loss of sensation. The patient also had pallor, frontal bossing with depressed nasal bridge.

The patient was then admitted for detailed examination. On general examination, patient was conscious and oriented to time, place, and person. His vitals were stable with pulse rate of 76/minute, blood pressure 102/56mmHg and respiratory rate 22/minute. The patient was also noted to have scoliosis. Nodules were seen on bilateral earlobes. On auscultation, bilateral air entry was normal and both heart sounds, S1 and S2 were heard with presence of murmur in mitral and tricuspid areas. Massive splenomegaly was found on per abdominal examination.  On probing, the patient gave history of chronic anaemia, having received 3 blood transfusions over the past year.

Routine hemogram revealed anaemia with haemoglobin of 5.2 g/dl with haematocrit of 7.7 and decreased red cell counts(2.9cells/ cubic mm). In addition, hyperbilirubinemia(3.3md/dl) was seen with mildly reduced serum calcium(8mg/dl) and raised serum phosphate levels(5.2mg/dl). Along with these, there was significantly high serum uric acid levels(10mg/dl). However, the renal function test was within normal limits with blood urea of 21mg/dl and serum creatinine of 0.8mg/dl. The peripheral blood smear showed hypochromic microcytic cells, tear drop cells, fragmented and target cells with marked degenerative changes in white blood cells. Ultrasonography of abdomen was also done which demonstrated hepatosplenomegaly.

Xray dorsolumbar spine was done in view of scoliosis which revealed diffuse osteopenia with biconcave appearance of vertebral bodies and partial collapse at multiple levels in lumbar spine causing scoliotic deformity with lobulated paravertebral soft tissue shadow along the lower dorsal spine on left side, due to extramedullary hematopoiesis (Figure 3 A and B). All the above findings suggested a provisional diagnosis of hemolytic anemia with gout.

Diagnosis of thalassemia was confirmed by High Performance Liquid Chromatography (HPLC) done subsequently which revealed HbF of 14.6%, HbA2 of 76.8% and HbA of 10 % suggesting possibility of double heterogenous for HbE and beta-thalassemia (Figure 4).

Fine Needle Aspiration Cytology(FNAC) from swelling in right little finger and right toe was also done which showed features of gouty tophous(numerous brownish needle like crystals ) which were confirmed on polarized light.

Based on patient history with supportive laboratory and histopathological findings, a final diagnosis of thalassemia intermedia with multiple tophaceous deposits was made.

Patient was started on tablet febuxostat 40mg for managing hyperuricemia, symptomatic treatment was given along with it. Packed cells were also transfused to manage anaemia. Patient condition improved and was discharged on medication. 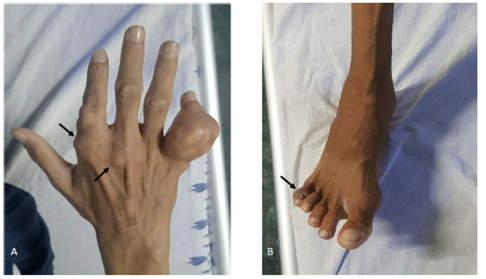 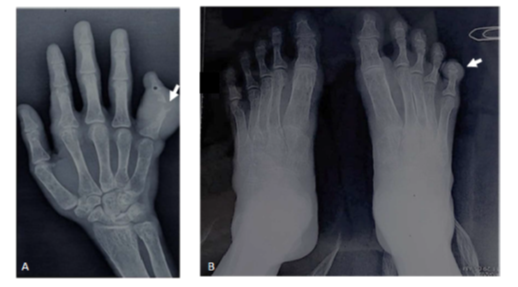 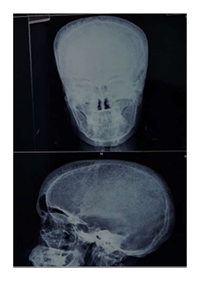 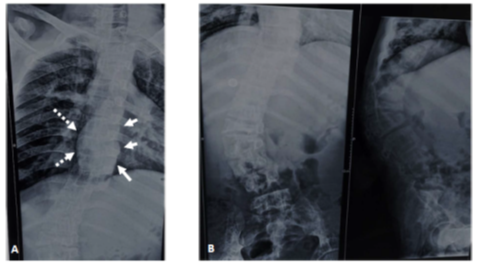 FIGURE 3 A-B: Xray dorsolumbar spine(Anteroposterior and lateral views) showing diffuse osteopenia with biconcave appearance of vertebral bodies and partial collapse at multiple levels in lumbar spine causing scoliotic deformity. Lobulated paravertebral soft tissue shadow also seen along the lower dorsal spine on left side suggestive of extra-medullary hematopoiesis(marked with arrows in A). The aortic shadow is seen to the right of spine consequent to scoliosis(marked with dashed arrows in A). 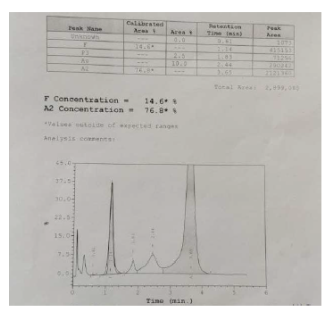 FIGURE 4: High performance liquid chromatography showing levels of HbF at 14.6%, HbA2 at 76.8% and HbA at10 % suggesting possibility of double heterogenous for HbE and beta-thalassemia.

Beta thalassemia is a genetic condition characterized by decreased beta chain synthesis and inadequate HbA formation. However, synthesis of alpha chain continues unimpaired, forming unstable aggregates in red cells and causing inadequate and ineffective erythropoiesis. Such red cells undergo destruction in marrow itself or in spleen.  There is increased destruction of immature erythrocytes (containing nuclei) which results in increased uric acid production, an end product of purine metabolism (present in nucleic acids). The uric acid has tendency to get crystalized in various tissues when the serum is supersaturated, at about 7.0mg/dl, and above this level there is increased risk of gout or renal stones[3]. Although hyperuricemia is common in thalassemia, clinical gout is distinctly uncommon. However, the raised serum uric acid levels in thalassemia patients at times leads to hyperuricosuria which results in microscopic haematuria, renal tubular dysfunction and GFR abnormalities[2,4]. The deranged renal function and prolonged hyperuricemia finally leads to development of gouty arthritis. In our case, however, gout was present although renal function tests were within normal limits.  According to previous literature only small percentage of patients of thalassemia with hyperuricemia develop gout. Few cases have been reported featuring clinically proven tophaceous gout in thalassemia patient, all of them surviving to their middle age, which is an important factor, as it gives adequate time to develop gout[5].

On imaging gout is seen as arthritis most commonly involving metatarsophalangeal joints, midfoot, hand and wrists. Imaging findings include erosion of phalanges, punched out lytic lesion involving joints with sclerotic margins and overhanging bony edges and associated soft tissue swelling. Gold standard for diagnosis is the presence of birefringent monosodium urate crystals under polarized light which can be established by biopsy or FNAC from the soft tissue swelling or from joint effusion aspirate[6,7], a feature seen in our case.

Hemolytic anemia like thalassemia also leads to erythroid hyperplasia and reticulocytosis in bone marrow which on radiographs is seen as coarsened trabeculae and thinned out cortex with widening of marrow spaces as in this case. The patient also showed extramedullary hematopoiesis (EMH) on radiographs. The decreased red cell count is a stimulator for erythropoietin production which in turn leads to EMH mostly seen in imaging as liver and spleen enlargement or paravertebral soft tissue swelling[8]. According to a study by Abolhasani Foroughi, Amin et al EMH is more commonly seen in thalassemia intermedia than thalassemia major, probably due to long time treatment with blood transfusion in thalassemia major patients, with inhibits EMH[9].

Patients with thalassemia may develop hyperuricemia due to increased cell turnover. A small percentage of these patients develop gout which may occur due to renal dysfunction. In presence of relevant clinical-laboratory and imaging findings, the diagnosis of secondary gout in thalassemia patients should be considered and managed accordingly.