We describe a previously unknown mechanism of injury for isolated lateral collateral ligament strain as well as a novel clinical sign. The mechanism of injury is poorly understood and testing of the LCL is challenging and so we aim to add to the evidence base in this area. We present two cases in professional football where LCL injury occurred after passing the ball laterally using forced external rotation of their feet with the knee in extension. Varus stress test was negative in both cases, but the pain was reproduced in long-legged sitting with the left leg crossed over the right at the ankle. This is a novel mechanism of injury with potential for a new clinic sign. Increased awareness of this mechanism of injury may allow clinicians to identify other cases in the future. Furthermore, with additional investigation, this provocative position could give rise to a new clinical sign.

Isolated injuries of the Lateral Collateral Ligament (LCL) of the knee are rare, it is more commonly injured in combination with other knee structures [1]. As such, the mechanism of injury is not well defined and clinical testing can be challenging. We present two cases with a similar mechanism of injury and examination findings.

Both cases are right foot dominant professional football players, Patient 1 was aged 25 years and a Patient 2 aged 20 years. They both presented with immediate lateral right knee discomfort after passing the ball to their right using forced external rotation of their feet with the knee in extension, shown in Figure 1. The pain became worse over the subsequent 24 and 48 hours respectively. Patient 1 was unable to weight bear at this time point. MRI scans of both patients confirmed grade 2 LCL strains (Figure 2). Patient 1 was reviewed at 17 days post injury and continued to complain of lateral knee pain but with some improvement. He was able to jog for 12 minutes despite discomfort. Patient 2 was reviewed at 20 days post injury. At this time, he was also able to run for 12 minutes at a time, but continued to complain of lateral knee pain. Both patients exhibited the same examination findings. There was no knee effusion and a full range of movement without pain. McMurrays’s, Thessaly, Lachman’s, sag sign and pivot shift tests were negative. Tests for medial collateral ligament were negative. Testing of the lateral collateral ligament with a varus stress test did not produce pain and there was not increased laxity. There was tenderness superior to the fibular head. Of note, however, pain in both patients was reproduced in long-legged sitting with the left leg crossed over the right at the ankle (Figure 3). Ultrasound examination of both patients revealed a thickened and hypoechoic lower portion of the LCL. They then continued their rehabilitation under their football club’s medical team. 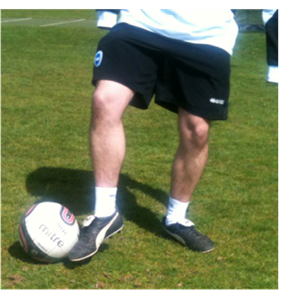 Figure 1: Position of knee at the time of injury. 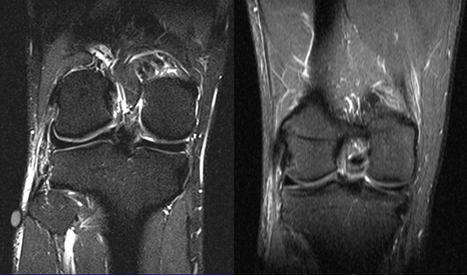 3.1 Anatomy and function of the lcl

The LCL is a component of the posterolateral corner of the knee, originating on the lateral femoral condyle and inserting on the anterolateral fibular head [1, 2]. In contrast to the more fan like medial collateral ligament, the LCL has a cord-like structure. Most studies show that the LCL is the primary varus stabilizer of the knee, particularly with the knee in extension, [2], however there are conflicting reports regarding its role in controlling rotation. Cadaveric studies have found that it limits either internal or external tibial rotation, or both [3]. There are a number of studies investigating the effect that flexion of the knee has on stressing the LCL. They have found that the ligament reaches its longest, and more tensioned, position with the knee in full extension [4]. The literature therefore suggests that the LCL is most vulnerable with the knee in extension and under varus and tibial rotational forces. However, it is unclear whether internal or external tibial rotation produces the greatest stress on the ligament.

The LCL is most often injured in a more extensive injury of the knee, in particular with other components of the posterolateral corner or in other multi-ligamentous knee injuries. Isolated injuries of the LCL are far less common and there are very few reported in the literature. Studies comparing sports associated ligamentous knee injuries found that football makes up the largest proportion but injuries to the LCL make up only 1.1% of sporting knee injuries [5]. Although the mechanism of LCL injury is poorly understood, previous studies have showed that a varus stress on the knee with flexion between 00 and 600 can cause injury [1, 6, 7], This is consistent with the work above describing the normal function of the LCL. There are a small number of reports of isolated LCL injuries in the literature, occurring in yoga [6], rock climbing, Jiu-Jitsu [8] and NFL. In the NFL, most cases occurred with direct contact trauma to the knee [9]. The two cases described in this report sustained their injuries in a non contact incident. They both occurred with the knee in near full extension, resisting a varus force from the ball impacting their foot, whilst simultaneously pushing the ball away with their foot through external tibial rotation (Figure 1). This is not a mechanism of injury that has been described previously, though it is a common movement used in football and so it is possible that others have been injured in this way.

3.3 Examination and symptoms of lcl injury

Diagnostic tests for lateral collateral ligament are not reliable in determining the presence or absence of LCL injury. Currently, the widely used diagnostic test is the varus (adduction) test, but the origin and accuracy of the test is unknown. Palpation of the LCL is also useful during the examination. However, there are a large number of structures present in the lateral knee and so specificity of this finding for LCL injury could be questioned. Sensitivity of the varus test has been reported as low as 25% [10]. The test is also not specific for LCL injury. DeLee et al. describe 12 cases with positive varus test who were found to have additional injuries of the posterior-lateral corner intraoperativley (7). The two cases described in this report had a similar mechanism of injury and examination findings. In both cases, traditional varus testing was negative. Of potential interest for future study however is the reproduction of reported in in a provocative position as described above. In both patients, pain was reproduced in a position that closely reproduces the mechanism of injury (Figure 1), and maximally stresses the LCL according to the cadaveric studies described above. The non-injured leg is crossed over the injured leg at the ankle whilst sitting with straight legs (Figure 3). In this position, the injured knee is in full extension, with varus and internal rotational forces applied. This position has not been described previously, but may merit further investigation, including studies into its sensitivity and specificity as a clinical test for isolated lateral collateral ligament injuries. It is easy to perform and does not require a large amount of skill from the clinician. However, In contrast to a test like the varus stress test, it would not provide information regarding the degree or grade of injury, only the presence of injury.

Isolated LCL strains are uncommon in sport when compared to other knee injuries. However, the novel mechanism of injury described here is commonly encountered in sport and so clinicians should be aware of this injury as a differential diagnosis for acute lateral knee pain. LCL strains can also be difficult to diagnose clinically as current clinical tests have poor sensitivity and specificity. In this study, the varus stress test was negative, but pain was reproduced in a provocative position finding. This position has not been previously reported, but with further study could represent a new clinical test. Further investigation into this test, including establishing the sensitivity and specificity may allow it to be incorporated into routine practice. This may provide the clinician with a useful tool to evaluate LCL injury.

None of the authors have any competing or financial interests to declare.