Uterine arteriovenous malformations (AVMs) are an unusual cause of uterine artery bleeding that can be either congenital or acquired following uterine instrumentation, trauma, infection, or Gestational trophoblastic disease [1]. Uterine artery malformations are mostly acquired malformations that is abide by a pregnancy event and investigated when uterine artery bleeding remains unmanageable despite medical measures. The bleeding caused by uterine malformations is episodic and can be severe, warranting hospitalization and blood transfusions. Traditional therapies of AVMs include medical management of symptomatic bleeding, blood transfusions, uterine artery embolization (UAE), or hysterectomy [2]. Treatment usually depends on the symptoms, age, desire for future fertility, localization, and lesion size. Uterine artery embolization is a preferred method of treating AVM, particularly in the patients of reproductive age group [3].

A 27 years old female, P1 L1 A3, presented to our hospital on July 04, 2020 with chief complaints of intermittent per vaginal bleed in the form of spotting for the last 2.5 months and pain in the lower abdomen for the same duration. Her last menstrual period (LMP) date was June 28, 2020.

The patient had overdue of menses, for which she did a urine human chorionic gonadotropin level test, which came out to be positive. Ultrasonography was done in a private hospital confirming the intrauterine pregnancy. Serum beta HCG was raised (1.5 lakh mIU/ml). The patient had two bleeding episodes during this pregnancy, each lasting for ten days. According to the previous treatment history, she underwent a medical abortion on April 14, 2020 and Dilatation and curettage (D&C) on April 16, 2020. Since then, the patient was having on and off per vaginal bleeding along with pain abdomen. There was no history of the passage of clot per vaginally.

The patient had a history of two more D&Cs in the past. Apart from that, she had a history of Laparoscopic cholecystectomy done for the treatment of cholelithiasis. Her liver function tests and kidney function tests were within normal limits. Again, Ultrasonography (June 29, 2020) was done in a private hospital for persistent per vaginal bleed, which showed a Bulky uterus measuring 12.4 x 7.2 x 5.2 cm with a heterogeneous mass-like area involving endometrium, myometrium of the lower uterine segment, and cervix showing arterial and venous flow on doppler study. Spectral analysis of the arterial vessels using doppler showed a low resistance and high-velocity flow. Peak systolic velocity (PSV) and resistance index (RI) were 47 cm/s and 0.32, respectively. These findings were suggestive of AVM. Also, CT Angiography (July 01, 2020) was done, which revealed a bulky uterus with a large well-defined lesion in the lower uterine segment involving the myometrium and endometrium with internal necrosis. It also showed multiple dilated and tortuous arteries and veins within the lesion supplied by the bilateral uterine artery and drained by bilateral uterine vein suggestive of AVM. The patient was planned for Digital subtraction angiography with uterine artery embolization on July 06, 2020 in the interdepartmental meeting.

After informed consent was obtained, both femoral arteries were punctured with an 18G puncture needle under Local Anaesthesia, and a 6Fr sheath was placed. 2500 U of heparin was given. 5Fr C1 catheter was navigated through the sheath, and Aortic run-off was taken. Selective external and internal iliac artery catheterization was done, and angiography was taken. It showed hypertrophied and tortuous bilateral uterine arteries (R>L). A tangle of vascular structures was seen, supplied by both rights and left uterine artery (Figure 1). Using 2.7 Fr Terumo Progreat microcatheter, super-selective catheterization of both arteries was done sequentially and embolised. Immediate flushing with 5% Dextrose was done, followed by removal of the Microcatheter. Embolising agent used was 20% lipiodol- nBCA (N-butyl cyanoacrylate) mixture. Postprocedural control angiogram showed complete devascularisation with patent other iliac artery branches (Figure 2 and 3). The Proximal left uterine artery was patent. Then, femoral sheath was removed, and manual compression was done to achieve hemostasis. A Pressure bandage was applied after that. No major post-procedure complication was noted except for diffuse pain in the lower abdomen, which was managed with oral and intravenous analgesics. The patient was planned for review USG Pelvis (B mode + doppler) two days after the procedure. 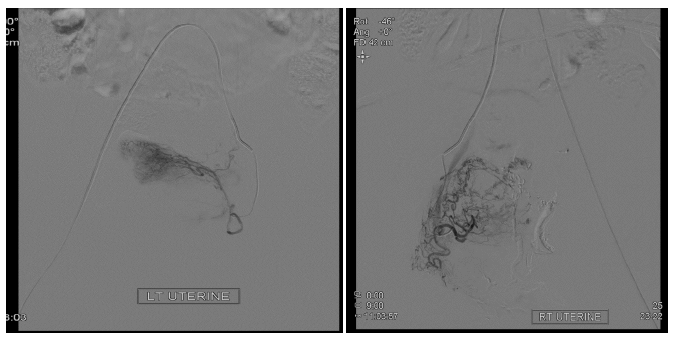 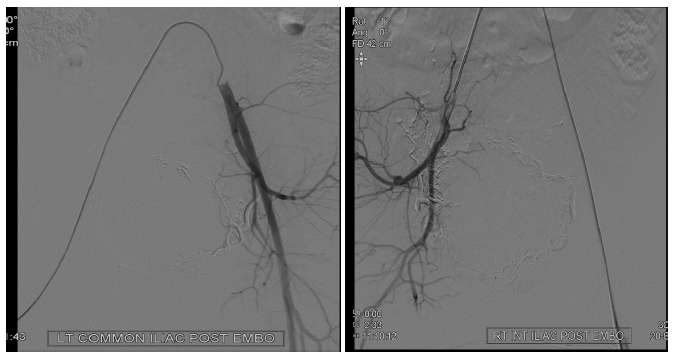 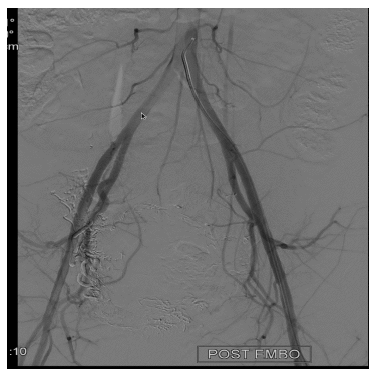 There was no recurrent episode of abnormal uterine bleeding at the two-week follow-up visit. Also, the menstrual cycle of the patient returned to normal one month after the follow-up.

Uterine Arteriovenous malformation is an uncommon condition which can result in serious life-threatening complications. They can lead to acute severe bleeding, infertility, or abnormal placentation. Uterine AVM can be congenital or acquired. Common acquired causes include uterine instrumentation, trauma, infection, gestational trophoblastic disease, and gynaecologic malignancies [4]. With the increased number of gynecological surgical procedures being done, the acquired uterine AVM prevalence will increase. Thus, uterine AVM is a differential that should be considered in any patient who presents with abnormal uterine bleeding.

Earlier AVM was diagnosed by laparotomy or during an examination of the uterine specimen after a hysterectomy [5]. However, with the availability of colour Doppler US, a non-invasive method, early diagnosis is possible. Grayscale ultrasound can detect multiple serpentine tubular or sponge-like anechoic or hypoechoic regions within the myometrium with normal endometrium, which on color doppler shows both arterial as well as venous flow. The spectral analysis will show high velocity (mean PSV: 136 cm/s), low resistance (mean RI: 0.3) flow, low pulsatility of the arterial waveform, and pulsatile high-velocity venous waveform. Differential diagnosis includes haemangioma, gestational trophoblastic disease, complex ovarian cyst, and retained products of conception. Thus, Digital subtraction angiography (DSA) remains the gold standard for diagnosis [5].

MRI is an excellent imaging modality providing an accurate definition of uterine AVMs and delineating the invasion of adjacent organs. The characteristic features include a sizeable bulky uterus with a focal mass, multiple serpentine flow-related signal voids within the lesion, disruption of the junctional zones, and prominent parametrial vessels [6]. Gadolinium-enhanced MRI demonstrates a hypervascular arterial-dominant flow. Like MRI, computed tomography (CT) may be used to determine the vascularity, extent, size, and involvement of the adjacent organs [7].

Peitsidis and colleagues [2] reported an extensive review of all reported cases of acquired AVM after D&C, in which 91 studies totaling 103 patients (1954–2011) were included. Among these, 95 women reported having a history of a curettage procedure before the onset of their symptoms. The mean age of diagnosis was 30 years, with 96% being premenopausal. UAE was the foremost standard treatment (59%), followed by hysterectomy (29%). The recurrence rate following UAE was 17%.

Traditionally, hysterectomy was the preferred modality in treating uterine AVMs; however, UAE, because of its effectiveness, minimally invasive nature, and the possibility of preserving uterine function to allow future childbearing, is increasingly becoming one of the preferred treatment methods [8]. Studies have shown bilateral UAE to be effective in 90% of the cases, with technical failures related to procedure complications, incomplete embolization, and rupture of the uterine artery in rest. Different embolization materials, including isobutyl-2-cyanoacrylate, detachable balloons, gelatin sponge, coils, thrombin, and polyvinyl alcohol, have been used in these procedures. However, there have been no study comparing the efficacy of different methods. In our case, we used a 20% lipiodol-nBCA (N-butyl cyanoacrylate) mixture as the embolizing agent [9].

Bilateral UAE using nBCA is a safe, effective, and minimally invasive method to treat uterine AVMs, which has long-term efficacy and can preserve fertility.