Conclusion: Our results suggested that the groups of sleep deprivation were associated with disruptions in the topological structure of brain functional networks.

Sleep deprivation can adversely affect the brain and cognitive function. A 2000 study, by the UCSD School of Medicine and the Veterans Affairs Healthcare System in San Diego, used functional magnetic resonance imaging (fMRI) technology to monitor activity in the brains of sleep-deprived subjects performing simple verbal learning tasks [1-3]. The study showed that regions of the brain's prefrontal cortex, an area that supports mental faculties such as working memory and logical and practical ("means-ends") reasoning, displayed more activity in sleepier subjects. Researchers interpreted this result as indicating that the brain of the average sleep-deprived subject had to work harder than that of the average non-sleep-deprived subject to accomplish a given task. They therefore concluded that the brains of sleep-deprived subjects were attempting to compensate for adverse effects caused by sleep deprivation. In 1998, Watts and Strogatz found the small worm’s neural network shows the feature of small world [4-6], and concluded that human brain system also has a complex network of small-world properties, then studies confirm the inference [7-9]. Since then, human brain research became the branch of the complex networks, which widely used to study brain diseases [10-12], cognitive tasks [13, 14], and the others. Many brain diseases reflects the small world property degenerate, which tend to random networks when compared with the normal control, such as Alzheimer's patients [15, 16], and attention-deficit/hyperactivity disorder (ADHD) patients [17, 18].

This study based on a common phenomenon in current society - lack of sleep. Studies have shown that adequate sleep is an important basis of human health. In current social environment, overtime work is widespread. In order to study how the lack of sleep affect our brain, researchers began to use an experiment, sleep deprivation, to study changes in our brain. Sleep deprivation is an experiment that to study the change of cognitive and neural activity via sleep restriction. Nowadays researches mainly through functional magnetic resonance imaging (fMRI), electroencephalography (EEG) and other data analysis to reflect the changes in human cognitive activity. Previous studies have shown that sleep deprivation has effects on human cognitive reaction speed, learning, work memory, attention, vigilance, and Inhibition [19, 20], participates has fatigue, drowsy, unresponsive, action instability and other physiological phenomenon. Individual cognitive impairment will be sustained serious with the time of sleep deprivation increasing. It is a very fatal problem for drivers, pilots, hospital staffs, astronauts, etc.

EPI template with a resampling voxel size of 3 × 3 × 3 mm3, smoothing with a 6mm full-width at half-maximum Gaussian kernel. No subjects were excluded because all the head motions were <2 mm or 2°.

2.2 Construction of functional brain network
To construct a functional brain network, we firstly employed the automated anatomical labeling (AAL) template [21] to parcellate the brain into 90 regions of interest (ROIs). Secondly, the time series was acquired on each ROI by averaging the signals of all voxels within that area and then linearly regressing out the influences of head motion and global signal. Thirdly, by calculating the Pearson correlation coefficients in the residual time courses between each pair of ROIs, a correlation matrix was obtained for each subject. To improve the normality, the correlation map was Fisher transformed (r-z) [22]. Finally, the absolute z values were converted into a binary connection matrix to make a graphic model of a brain network. That is, if the absolute zij (Fisher r-to-z of the Pearson correlation coefficient) of a pair of brain regions, i and j, exceeded a given threshold T (Fisher r-to-z), an edge was said to exist; otherwise it did not exist. The degree of each node, Dnod, is the number of connections that link it to the rest of the network. The total number of edges in a network, divided by the maximum possible number of edges (N2-N)/2, is called the connection density or the cost of the network [23]. Given that there was no accurate way to choose a threshold in studies of brain networks, so the functional brain networks were constructed over the whole value of costs (0.03 ~ 0.50) at the interval of 0.01 (Figure 1.). Because a similar trend for between-group differences was observed over the range of 0.03~0.50, and the biggest difference between MDD patients and healthy controls was found when cost is 0.21 for global measures, only results using a cost of 0.21 were reported for regional nodal analyses [24].

Where NGi is the nodes of the sub-graph Gi , The local efficiency of node is a measure of the fault tolerance of sub-graph, which indicates that higher local efficiency is more stable while the node was eliminated.

The node efficiency is defined as the inverse of the harmonic mean of the minimum length of path between node i and all other nodes in the network. 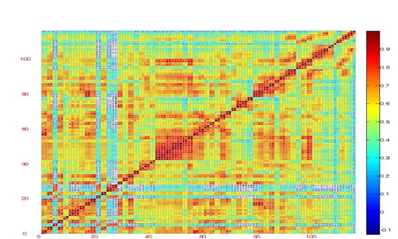 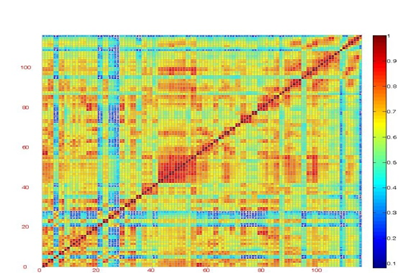 In term of different threshold T (Fisher’s r-to-z) to the partial correlation coefficients, we get network density Kcost in range of 0.3-0.5 and calculate the clustering coefficient, characteristic path length, local efficiency, global efficiency (Figure 2A-D). Statistical analysis reveal that clustering coefficient and local efficiency are significant differences in Kcost (Fig.1A, B),suggesting that local processing efficiency enhanced; the characteristic path length is significant increased and global efficiency is significant decreased, suggesting that the brain functional network has lower messaging capabilities in sleep deprivation. Despite sleep deprivation is negative impact of our body, the brain improve the local processing capability through self-regulation to resist the impact [23]. 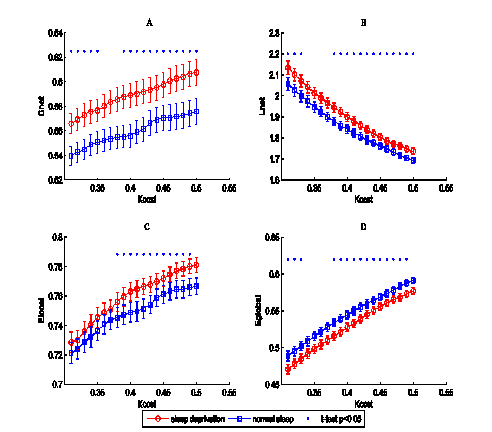 To further reveal the influence of the sleep deprivation, the two group difference in nodal efficiency was tested at the connection density of 0.41. We find that the nodal efficiency in anterior cingulate (ACG.R), inferior parietal (IPL.R), supramarginal gyrus (SMG.R), caudate nucleus (CAU.L, CAU.R), thalamus (THA.L) are significant decreased. And the temporal pole: middle temporal gyrus (TPOmid.L, TPOmid.R) are significant increased (see Figure 3, Figure 4 and Table 1). At the same time, we also conclude that the nodal efficiency is affected by sleep deprivation obviously.

The anterior cingulate is effect on inhibitory control, attention and vigilance. Suggesting that human may distracted easily and lapse. The thalamus (THA.L) is also effect on attention. The angular gyri (IPL) and supramarginal gyrus (SMR) is important cause of semantic processing and somatosensory. In contrast, the middle temporal gyrus is increased, which indicate that not all effect of nodal efficiency is decreased in sleep deprivation. It may comfirm the compensatory mechanism of the brain to prevent the affection of sleep deprivation. 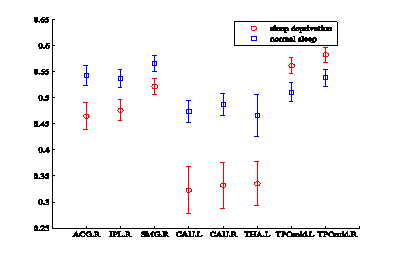 Figure 3: Nodal efficiency significant changes at cost of 0.41, Red and blue error bars correspond to the mean and standard error of the two group. See Table 1 for the detail of the regions. 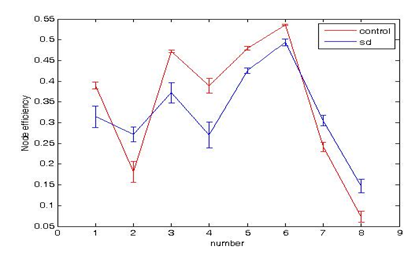 In this paper, we constructed functional brain networks on the global scale for normal sleep controls and abnormal sleep groups. Graph theory analyses revealed that the global efficiencies of functional brain networks in MDD patients and healthy controls were greater than regular networks but less than random networks, and the local efficiencies were greater than random networks but less than regular networks over the whole range of 0.03~0.50 (Figure 5). These results were typical features of small-world and were compatible with previous studies of small-world brain networks. Through the clustering coefficient, characteristic path length compare with random network, there are three parameters. The definition as follow:

is the ratio of clustering coefficient between real and random network.

is the ratio of characteristic path length between real and random network.

σ is the ratio of γ  and λ , which represent the small-worldness of a network.

When γ>1 ,λ≈1 ,σ>1 , the network fit the definition of the small-worldness. σ  increase significantly in range of connection density ( Kcost ) in sleep deprivation(see Figure 3C), which indicate that the small-worldness enhanced in sleep deprivation. The γ  values is increased in whole range of Kcost (Figure 5A), the λ  and σ  is significant in range of 0.38 and 0.5 (Figure 5B, C).

This work was supported by National Natural Science Foundation of China (31571111, 61472330). Thanks for the Department of Psychology of Southwest University offers fMRI data.

The authors declared that the research was conducted in the absence of any commercial or financial relationships that could be constructed as a potential conflict of interest.

This research have informed consent to participate. Ethics approval was granted by the ethics committee of School of Psychology, Southwest University.