A Case of Chronic Subdural Haematoma, A Rare Complication of Eclampsia in Pregnancy

Hypertensive disorders of pregnancy constitute one of the leading causes of maternal and perinatal mortality worldwide. Chronic subdural hematoma is extremely uncommon in Pregnancy. Intracranial haemorrhage (ICH) is deadly complication, if it occurs in pregnancy both mother and fetus gets compromised. Here we present a rare case of Subdural Hematoma in a patient with eclampsia in pregnancy, in which both the mother and baby were discharged with a multidisciplinary approach and early detection of the condition.

Hypertensive disorders of pregnancy constitute one of

the leading causes of maternal and perinatal mortality worldwide. It has been estimated that preeclampsia complicates 2–8% of pregnancies globally [1]. Although maternal mortality is much lower in high-income countries than in developing countries, 16% of maternal deaths can be attributed to hypertensive disorders [1, 2].

Intracranial Haemorrhage is a rare complication of Pre-eclampsia/Eclampsia in pregnancy. When stroke (ischemic or haemorrhagic) occurs during pregnancy, both women and the child may have devastating outcomes [3]. The incidence of stroke in pregnant patients is estimated at 34.2 per 100,000 deliveries, and the mortality rate is 1.4 per 1,00,000 [4] deliveries, accounting for both types.

Here we present a rare case of Subdural Hematoma in a

patient with Eclampsia in pregnancy, in which both mother and baby were discharged uneventfully.

A 28 year-old female G2P1D1 previous Vaginal Delivery with 29 weeks of gestation was brought to the casualty in an unconscious state with a history of convulsions. On examination, Her general condition was poor, her Pulse was 120 beats per minute, with BP of 130/90mmHg, SpO2 - 99% on RA, Respiratory Rate of 22 per minute. There was No pallor/icterus. Bilateral pedal oedema was present with urine albumin of +2. On systemic examination, heart sound s1s2 was present, no murmur was heard, and air entry was bilaterally equal.

On CNS examination, she was unconscious, not responding to commands, anisocoria was noted, and a corneal reflex was present. On Per Abdomen, Uterus was 28-30wks, the size and lie of fetus was Longitudinal with cephalic, Fetal heart sounds were well appreciated, and Uterus was relaxed. On Per Speculum examination, Cervix & Vagina was Healthy. On Per Vaginal examination, the cervical os was closed. No signs of external trauma were seen.

Patient intubated in view of poor GCS (Glasgow Coma Scale), Urgent MRI brain was done, which was s/o a Subdural Hematoma on the left fronto-temporo-parietal region as seen in Figure 1. Her Blood investigations were normal with haemoglobin of 12.2gm/dl, total counts of 15,210 and platelets of 2.56lakhs. Her coagulation profile was within normal limits; her prothrombin time was 11.6seconds with a test time of 11.7seconds and INR of 0.99 and aPTT of 27.90 seconds with a test time of 32 seconds. 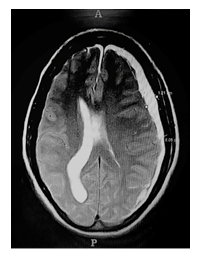 Subdural Hematoma is a complication of pre-eclampsia/eclampsia although it is rare but can happen anytime without the presence of HELLP Syndrome/ thrombocytopenia or any other coagulation abnormality. It may be because of stretching and tearing of bridging veins between the cortex and dural venous sinuses. Chronic subdural hematoma is extremely uncommon in Pregnancy. Intracranial haemorrhage (ICH) is a deadly complication, if it occurs in pregnancy and both the mother and fetus get compromised. Moreover can lead to lifelong morbidity, so prompt and accurate identification of signs and symptoms and early intervention with a multidisciplinary approach can prevent maternal and fetal morbidity and mortality. Urgent neurosurgical conditions usually outweigh obstetric considerations and the treatment of ICH is generally the same as nonpregnant women. Effective decision making demands thorough knowledge, thus multidisciplinary obstetric disaster preparedness is essential for all institutions.