Dyslipidemia in Pregnancy and the Proper Reference Values: A Retrospective Study in South China

Background: Dyslipidemia during pregnancy is associatied with the risk of adverse pregnancy outcomes. However, there is no uniform diagnostic criteria. “Williams Obstetrics 24th Edition” (WO24) and Wang et al gave different lipid references based on ethnic groups. To address the proper reference values of pregnant lipid, we conducted this retrospective study in pregnant women in South China.

Conclusions: Dyslipidemia during pregnancy is associated with the increases of pregnant complications. The reference by Wang et al were more applicable in Southern China.

The levels of serum lipids physiologically raise throughout pregnancy due to unique physiological state and necessary metabolism functional adjustments [1-3]. The significant changes of lipid concentration can be observed from the second trimester of pregnancy [4]. However, evidences suggested that the increased maternal lipid levels are associated with adverse pregnancy outcomes, including gestational diabetes mellitus (GDM), pregnancy-induced hypertension (PIH), preterm birth (PTB), preeclampsia (PE), and macrosomia [5-9]. In addition, dyslipidemia during pregnancy may lead to postpartum dyslipidemia and postpartum impaired glucose tolerance in mothers [10-14] and metabolic disorders in offsprings [15].

However, there is no consensus about normal maternal lipid values during pregnancy. One of the most used reference criteria for lipids during pregnancy was from “Williams Obstetrics 24th Edition” (WO24) [16]. These reference values were calculated according to the 2.5th or 5th percentiles of lipid values from pregnant women mainly from Porto (Portugal), Graz (Austria) and Warsaw (Poland) studies. Recently, a study by Wang et al [17] propose a lipids reference for Northern Chinese pregnant women by calculated the 5th percentiles. The baseline characteristics were mostly similar for dyslipidemia people diagnosed by those two references, including maternal age, p-BMI, family history of diabetes and hypertension. However, it has been shown that the normal blood lipid ranges are different between Western and Eastern populations [18]. Therefore, the reference ranges of blood lipids during pregnancy might also vary from ethnic and regional groups. In this study, we analyzed the lipid profile in the Southern Chinese pregnant women of middle stage. The reference values of pregnant lipid were calculated by the 5th percentiles. And the pregnant complications were compared among the cohorts by three different diagnostic references, for the purpose to address the proper reference values of pregnant lipid in Southern Chinese women.

This retrospective study was performed at one of the largest regional university hospitals in South China (The First Affiliated Hospital of Sun Yat-sen University). A total of 860 pregnant women who delivered at our institution between January 2018 and April 2018 were recruited. Approval was obtained from Institutional Re-view Board. Informed consent was waived because this study was retrospective. Women were excluded if they met the following conditions: (1) diagnosed of diabetes or hypertension before pregnancy; (2) patients with hypothyroidism or hyperthyroidism; (3) patients with chronic kidney disease or hepatic dysfunction damage; (4) multiple pregnancy; (5) missing data of blood lipids in the second trimester. Overall, 642 cases were included in the final analysis.

Since lipid levels raise significantly from 12th week of

pregnancy and both of those two researches had recommended reference of dyslipidemia in second trimester, we compared the reference in the second trimester of pregnancy. The following data were collected from medical records: maternal age, pre-pregnancy body mass index (p-BMI), family history of diabetes and family history of hypertension, and results of pregnancy lipids, pregnancy complications including GDM, PIH, PE, PTB, and macrosomia. In “Williams Obstetrics 24th Edition” [16], the recommended reference unit for blood lipids was mg/dL. We converted the unit to mmol/l according to the conversion factors described in the instructions of the blood fat detection kit provided by Roche Diagnostics GmbH.

All blood samples were measured in the laboratory of the Department of Biochemistry of the First Affiliated Hospital of Sun Yat-sen University. Lipid levels were measured with standard enzymatic procedures on an automatic chemistry analyzer (Abbott Aeroset, Chicago, IL, USA). Reference values of the lipids were calculated with 95% confidenceinterval (CI). Abnormal TC, TG and LDL-c level were diagnosed with the value above the 95% percentiles, and abnormal HDL-c level was diagnosed with the value below the 5% percentiles.

Data of a total of 642 pregnant women of the mid-trimester were collected. The mean age were 32.70 ± 0.18 years. 6.54% of these women had a family history of diabetes and 10.44% had a family history of hypertension. The average lipid levels were presented in Table 1. The prevalence of dyslipidemia were 11.53% by WO24 reference value and 17.45% by Wang’s reference value (P<0.001). There was a trend of increase of TC, TG and LDL-c levels as the pregnant week increase, while the levels of HDL-c remanded stable during the whole pregnancy. The TC and LDL-c levels raised significantly between 16 to 20 weeks and maintained a smooth stage thereafter. However, the TG levels have shown continuous increase in the whole stages (as shown in Figure 1).

The referent range of the lipids of our cohort were shown in table 2. The prevalence of dyslipidemia was 15.26% by the references of our research. After adjusted by maternal age, p-BMI, and gestational age at the time of lipid measurement, The relation between the lipid levels in second trimesters and the risk of pregnant complications were analyzed by logistic regression analysis. It was observed that increase of TC concentration was associated with increased risk for PTB (odd ratios [OR]: 1.150), increase of TG concentration was associated with increased risk for GDM (OR: 1.494) and PTB (OR: 1.415), and increase of HDL-C concentration was a protective factor for PIH (OR: 0.124) and PE (OR: 0.086). However, when we turned HDL-c concentration into a categorical variable, the protective effect was diminished. The level of LDL-c showed no statistic association with GDM, PIH, PE, PTB, and macrosomia (Table 2).

3.3 The adverse pregnant outcomes of dyslipidemia

The reference values of abnormal lipid levels were 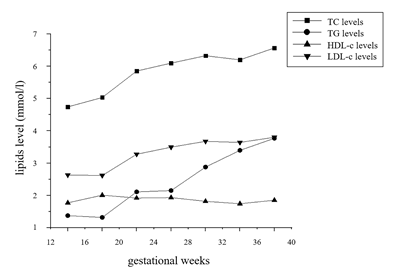 Figure 1: The changing curve of lipids level during pregnancy.

3Our research: 95th percentage from our population

a P values of OR (95% CI). OR (95% CI) and P valuesa were calculated by logistics regression analysis

bCompare with our research, calculated by Fisher exact test

1 95th percentage from our population

This study found that every 1 mmol/l elevation in HDL-c concentration in second trimester was associated with a significant decreased risk of PIH and PE. However, when we turned HDL-c concentration into a categorical variable, the protective effect was diminished. Together with that there was no significant changes of HDL-c levels during the whole pregnancy, we consider the levels of HDL-c play a limited role in the adverse pregnant outcomes. Same is the LDL-c level as we found no statistic association between LDL-c level and any kind of adverse pregnant outcomes. TG was the lipid with the most obvious increase during pregnancy and was significantly associated with both the increase of GDM and PIH. TC levels raised significantly at 16 to 20 pregnant weeks and stabled in the following stages. It is also associated with increased risk of PIH. Taken together, attentions should be paied on the abnormally increases in the TG and TC levels during the second trimester of pregnancy, as it may be a mark of metabolic syndrome developed in pregnant mother that relates to the long term postpartum metabolic disorders in both mother and offsprings.

Our study showed that both WO24 and Wang’s study

provided applicable serum lipid reference values to the pregnant women in Southern China. The reference by Wang et al may be more applicable as the prevalence of dyslipidemia and the ORs of adverse outcomes were more similar with ours. Abnormally increased TG and TC levels at mid-stage of pregnacy play important role in the adverse pregnant outcome and may be associated with long term postpartum metabolic statements. There were several limitations in our study. First, the limited sample size of our study might weaken its power of presentative of women in Southern China. Second, the risk of selection bias is unavoidable in observational study. Therefore, furtherprospective multicenter randomized controlled investigations for lipid reference during the whole pregnancy are needed.

In conclusion, this study showed that dyslipidemia during pregnance is associated with the increases of pregnant complications. Futhermore, both the pregnant serum lipid references of WO24 and Wang’s study are applicable to pregnant women in Southern China. However, the reference by Wang et al provided a trend of more applicable. This finding provides evidence for lipids screening during pregnancy.