Case: Primiparous of 26 years had three recurrent episodes of severe PPH within 37 days after LSCS. Hysteroscopy visualized features of uterine scar dehiscence on the left angle side and excluded other causes of PPH after the 2nd episode on the 24th day and found bleeding through the wound gap. Laparoscopy after 3rd episode on 37th day revealed bleeding eroded left uterine artery. Bipolar coagulation of the left uterine artery sealed bleeding and conserved the uterus.

Secondary postpartum haemorrhage (PPH) following caesarean section (CS) occurs one in 365 cases. Common causes are the retained products of concept-tion, subinvolution of placental site and endometritis, etc. Massive life-threatening secondary PPH due to uterine wound dehiscence after lower segment caesa-rean section (LSCS), and because of uterine artery erosion is rare [1]. The diagnostic difficulty of such cases increases morbidity and delays definitive inter-vention. We, present here with a case of recurrent (three times) massive secondary PPH within 37 days after LSCS where a hysteroscopy helped us to detect bleeding through the left angle of the uterine scar from the eroded left uterine artery, and was managed laparoscopically.

A 26-year primiparous woman was presented to our hospital in an emergency on the 24th day after CS in a state of haemorrhagic shock. She was afebrile, her blood pressure was not recordable. There was infla-mmation and induration of the abdominal wall skin scar. Vaginal wall had no tear or trauma. About 100cc of blood clot was removed from vagina during the speculum examination. However, there was no fresh haemorrhage from the vaginal or cervical canal at the time of examination. LSCS was indicated for failed progress of labour. She was discharged from the hospital on the fifth post-operative day after uneventful recovery. She gave history of a similar episode of severe vaginal bleeding on 20th day (first episode) after LSCS. She responded to conservative management with intravenous fluids, blood trans-fusion and antibiotics in another local hospital. The bleeding stopped following the management, and she went home after a day.

On bimanual vaginal examination, uterus was well involuted, external cervical os was patulous. There was tenderness in fornices. Transabdominal ultra-sound showed an empty uterine cavity and cervical canal. There was a hypoechoic area of broad ligament suggesting oedema measuring 2.5cm beside the left angle of the CS scar. The right angle of the LSCS scar did not show any hypoechoic oedematous area. She was resuscitated with intravenous fluid and blood transfusion. Broad-spectrum antibiotics were started. We continued watchful conservative management as there was no active bleeding. Blood investigation showed leucocytosis (TLC - 12800/mm3) with predominant neutrophils, severe anaemia with hemoglobin-5.4Gm%, normal Platelet- 290 thousand/ ml and raised CRP level-10.6mg/L.

We performed hysteroscopic evaluation 48 hours after conservative treatment with an aim to find  other causes of PPH like a retained piece of placenta, endometritis, scar dehiscence, slough, etc. Hyster-oscope entered easily into the uterine cavity without a need for cervical dilatation. The tip of the 30-degree hysteroscope was directed towards the posterior wall of the uterus during insertion to avoid the fragile LSCS scar. Hysteroscopy showed smooth uterine cavity, pale appearing endometrium without any tear or space- occupying lesion or endometritis. During withdrawal of the telescope, the anterior wall of the cervix showed multiple loose loops of vicryl suture hanging in one place (Figure 1) to the left side of the midline of the LSCS scar. Also, there was a thin string of blood clots of the recent bleeding hanging along the loops of vicryl suture on the left side (Figure 1). The upper end of the clot was there inside the LSCS wound gap. Hysteroscopic diagnosis of sloughing of edges of incision on the left side of uterine scar was made. In view of no active bleeding throughout the admission periods, we took the traditional decision to continue with the conservative treatment. The patient recovered and went home after 5 days. 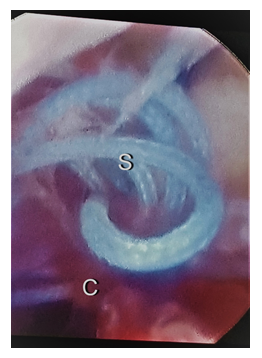 On the 37th day after the caesarean section, she again presented in emergency with the third episode of vaginal bleeding. The patient was apprehensive about her concern. Her blood pressure measured 120/80mm of Hg, the pulse of 96/min. The patient was in stable condition. During speculum examination, about 200cc of blood clot came out of the vagina. Again, there was no active bleeding from the cervix. The patient was treated with a plasma expander and intravenous fluids. Her transabdominal ultrasono-graphy had similar oedematous features to that of the previous one after 2nd episode of bleeding. We strongly suspected the source of recurrent bleeding was from the left uterine artery erosion following uterine scar dehiscence and decided to proceed with emergency laparoscopy, and laparotomy as when required. She signed the informed consent for operative laparoscopy, emergency laparotomy and if needed, for a hysterectomy. Under anaesthesia, we tried a quick hysteroscopy as the patient had no active vaginal bleeding and was in stable condition. The hysteroscopy found a clear uterine cavity, the clot and blood were seen clearly at the LSCS wound dehiscence.

After achieving complete haemostasis, edges of incisions after minimal debridement were closed in a single full -thickness layer using interrupted vicryl suture no 1(Ethicon). Inj. Meropenem (1Gm) was administrated 12 hourly for 5 days. The patient continued scanty blood tint discharge vaginally from inflamed and oedematous tissues for 5 days and was discharged from the hospital on the 6th post-operative day. She was followed 6 weeks later with no fresh complaints. The patient resumed her normal menstruation 3 months after laparoscopy. Thereafter, she did not experience recurrence of severe uterine bleeding.

This is the first case in our obstetrics practice of 22 years. Recurrent episodes of massive secondary PPH following uterine wound dehiscence like the present case had been reported by previous studies [1, 3-6]. Massive haemorrhage occur usually from uterine artery leaks [1, 3-5]. Erosion of the arterial wall due to infection may occur without an aneurysm [7]. Remission due to different haemostasis mechanisms in between 2 episodes of massive haemorrhage gives a false impression of complete recovery, and delays diagnosis and definitive treatment. The main risk factor associated with infection and weakening of the arterial wall is previous surgical trauma [8] among others like underlying arterial pathology, foreign body, intimal disruption, and endothelial cell (EC) dysfunction, etc. The sloughing out of the left angle of the CS scar compared to the right angle in this case, caused tension and tearing of the bare weak ascending branch of the uterine artery. All cases having infection of the abdominal wound and uterine wound do not suffer from uterine wound dehiscence and massive PPH. Sloughing of uterine wound margins rarely happens due to infection [9]. The uterine wound dehiscence could be detected by MRI. A pelvic angiogram would have detected and occluded by uterine artery embolization the leaks from the uterine artery in a hemodynamically stable patient in the same sitting [3]. Bare exposed uterine artery erosion was the culprit of severe secondary PPH in this case. Alternatively, in the present case, abdominal sonography, a quick hysteroscopy, and an emergency laparoscopic bipolar seal of uterine artery could serve the purpose of minimally invasive surgery  in a stable patient.  In the present case, lapa-roscopic bipolar coagulation of the uterine artery successfully stopped bleeding and helped to conserve the uterus like that of uterine artery embolization [1, 4, 5].

Recurrent massive PPH may occur from uterine artery erosion following LSCS scar dehiscence. Abd-ominal sonography, a quick hysteroscopy, and an emergency laparoscopic bipolar seal of the uterine artery can serve the purpose of minimally invasive surgery  in a stable patient.