Clostridium tertium (C. tertium) is a Gram-positive, aerotolerant bacillus and a rare human pathogen usually identified in neutropenic patients with hematological malignancy. Limited case reports in non-neutropenic patients suggest the C. tertium is a potential pathogen when associated with risk factors which include intestinal mucosal disruption and beta-lactam antibiotic use. Our case is a 59-year-old woman who developed a post-operative collection containing C.tertium following complete cytoreductive surgery for high-grade serous cancer of tuboovarian origin in the absence of neutropenia. To our knowledge, this is the first documented case of C. tertium infection in a post-operative Gynecological-Oncology patient.

Clostridia are a diverse group of Gram-positive, spore-forming bacilli found in soil and intestinal tracts of animals and humans. First isolated from war wounds in 1917, C. tertium is an unusual species within this genus, being both aerotolerant and non-toxin producing [1]. It is rarely a pathogen in immunocompetent individuals, being more frequently associated with pathogenic infection in patients with neutropenia and hematological malignancy [2, 3]. A number of presentations are described ranging from soft tissue infection to spontaneous bacterial perit-onitis [2-8]. To date, C.tertium is not reported as a pathogen causing major complications in the post-operative gynecological patient.

A 59-year-old woman with a past medical history of mild hypertension presented with abdominal bloat-ing, pain and constipation. Previous surgery included abdominal hysterectomy with ovarian conservation for uterine fibroids. Workup included serological CA125 and CA19-9 tumour markers (245 kU/L and 94 kU/L, respectively) and a CT scan showed a pelvic mass with evidence of disseminated peritoneal disease. Flexible sigmoidoscopy failed due to extrin-sica compression from the mass. Ultrasound-guided peritoneal biopsy confirmed the diagnosis as high-grade serous carcinoma of tubo-ovarian origin. The patient was counselled for primary cytoreduction via laparotomy. Intra-operative findings were consistent with the pre-operative imaging results. Complete cytoreduction was achieved by removal of the pelvic mass, contralateral tube and ovary en-bloc with the colon and omentum, as well as total abdomino-pelvic and right diaphragm peritonectomy. An end ileostomy was created and the right upper quadrant and pelvic drains were placed at the end of the operation. Intravenous (IV) piperacillin/tazobactam 4.5 g and metronidazole 500g was administered in the first 24 hours postoperatively according to the preferences of the consultant surgeon.

Following an uncomplicated stay as an elective patient on the surgical high dependency unit, the patient was discharged to ward-based care according to our institution’s enhanced recovery pathway. The pelvic drain was removed on day 4. The patient developed oral candi-diasis on day 5 postoperatively and was commenced on oral nystatin spray. On postoperative day 5, symptomatic ileus was diagnosed after the patient reported mild abdominal cramps, distension and nausea. On day 7, the patient developed acute abdominal pain and feculent discharge per vagina. Blood results revealed an acute rise in inflammatory markers with a white cell count of 20.12 (9.59), neutrophil count 17.77 (7.51), C reactive protein 429 (53.6) and a new stage 2 acute kidney injury. A CT thorax, abdomen and pelvis showed moderate intra-abdominal collections and gas within the pelvis (Figure 1).

Due to concern regarding the patient’s clinical condition, an emergency laparotomy was performed. Intra-operative findings on this occasion included an infected pelvic hematoma with pooling of serous fluid, infected debris and fibrin deposition. As per consultant microbiologist guidance, the patient received intravenous piperacillin/tazobactam 4.5g and metronidazole 400mg three times daily for 24 hours, before being switched to IV Ciprofloxacin 400mg and metronidazole 500 mg on postoperative day 2. On postoperative day 3, surgical specimen bacteriology was reported showing polymicrobial growth including Coliforms, Streptococcus angina-osus, and C. tertium. Clinical status and biochemistry significantly improved and on day 4 the patient was switched to oral ciprofloxacin 500mg and metro-nidazole 400mg, again with Microbiology Consultant advice. This regimen was continued until postopera-tive day 9 when antibiotics were discontinued following sustained clinical improvement. On post-operative day 10, the patient was discharged home. Blood cultures and surgical wound swabs grew no organisms. 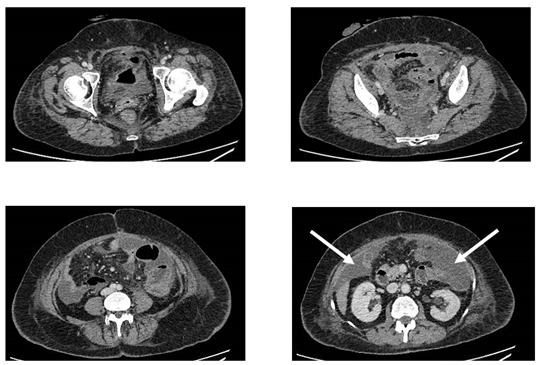 Risk factors for C.tertium infection include neut-ropenia, intestinal mucosal injury, severe liver disease and use of beta-lactam antibiotics [2] Over 90% of cases of pathogenic C.tertium infections involve neutropenic patients [2]. C. Tertium invol-ving non-neutropenic patients is rare and almost all reported cases involve gastrointestinal pathology. Two cases of C.tertium have been reported in the post-operative patient. Hepatic abscess and C.tert-ium bacteremia following emergency appendectomy [8] and C.tertium lung empyema post right hemi-colectomy [9]. In our case, numerous risk factors were identified including recent bowel resection, peri-operative administration of beta-lactam antibio-tics and a possible impaired immune system from prolonged poor nutrition. Additionally, in this case, a solid-state hemostatic agent was used to aid hemo-stasis before closure. These agents have previously been reported to be a risk factor for the development of postoperative pelvic collection in gynecological patients undergoing pelvic exenteration for recurrent malignancy [10].

Post gynecological surgery pelvic collections are mostly polymicrobial due to contamination from the skin, vaginal opening or bowel resection [11]. Organisms commonly found include Coliforms, Enterococcus, Streptococcus and Anaerobes. Due to its aerotolerant characteristics, C.tertium is some-times falsely identified as Gram-positive aerobic organisms/bacilli, and these are often judged to be a contaminant such as Lactobacillus spp. or Bacillus spp. [12]. In some cases, this has led to delays in the initiation of correct treatment. Antimicrobial guide-lines for the management of C.tertium are not standardised. Typically, the organism is resistant to beta-lactams, including cephalosporins and clinda-mycin. Common susceptibilities and successful treat-ment has been described with vancomycin, quin-olones, imipenems and trimethoprim [3, 13-15]. C. tertium bacteremia has been successfully treated with Metronidazole, yet we understand metronidazole resistant strains have been reported. In our case, this particular C.tertium strain was sensitive to peni-cillins, co-amoxiclav and metronidazole.

In conclusion, we present the first case of a post-operative polymicrobial pelvic collection containing C. tertium in a tertiary Gyne-Oncology unit. Numerous identifiable risk factors were found for C. tertium infection and for developing a post-operative pelvic collection. A combination of bowel surgery, exposure to perioperative beta-lactam antibiotics and use of fibrin hemostat agents were likely to be contributing factors. By reporting this case we hope to contribute to the limited literature available regarding C.tertium pathogenicity and successful management. Given its potential for misidentify-cation, C.tertium should be considered in the post-operative Gynecological Oncology patient who has been exposed to known risk factors.