Coconut water (CW) has gained wide attraction as a known functional food that offers additional benefits to its basic nutritional value. CW is employed in the management of oxidative stress-associated diseases for its natural antioxidant features. This study sought to investigate CW antioxidant capacity and effect upon its dietary inclusion in an Alcl3-induced amnesic Drosophila melanogaster. CW was extracted from the coconut fruit cotyledon and supplemented in the flies’ diet for five days. The CW extract antioxidant activity was examined in vitro through the total phenol, total flavonoid content, ferric reducing power, iron-chelating ability, ABTS* and DPPH* scavenging ability assays. Likewise, the anti-lipid peroxidation potential of CW extract was also measured in vivo using D. melanogaster. The CW extract has a total phenol content of 1.48 ± 0.43 (mg/g GAE) and a total flavonoid content of 0.53 ± 0.02 (mg/g QE) which could be attributed to its scavenging ability against ABTS* and DPPH* in vitro with an increase in extract concentration. Similarly, a positive trend was detected in the ferric reducing antioxidant power and iron-chelating ability tests. Furthermore, dietary inclusion of CW in groups fed with 0.1% and 1% CW lowers Malondialdehyde (MDA) concentration significantly (p < 0.01 and p < 0.0001 respectively) in Alcl3 induced flies. This correlates with CW’s ability to considerably (p < 0.05) reduced MDA in vitro in a concentration-dependent manner (0.01 – 0.03 mg/mL). These findings provide substantial information that affirms CW's natural antioxidant ability, thus bolstering its therapeutics usage.

Coconut fruit, botanically called Cocos nucifera, is a member of the Arecaceae family, which provides numerous health benefits beyond its nutritional content [1]. Coconut water has gained attention as a functional food with its application in health and medicine, supported by increasing scientific evidence [2]. This coconut water is the plant's liquid endosperm and an outstanding natural drink with a caloric of 174/100g. Coconut water contains unique beneficial ingredients, namely sugars, vitamins, minerals, amino acids, and plant hormones which justifies its wide applications [3, 4]. The phytohormone Cytokinins' present in coconut water influences the plant cell division and confers its anti-aging effects [5]. According to some experimental research and reviews, coconut water has been revealed to contain minerals and aromatic compounds as its primary composition [3, 6] Young coconut water (about six months) contains estrogen-like compounds that prevent Alzheimer’s disease in menopausal women [7], while the matured coconut water of about 12 months has displayed hypoglycemic effect and also reduced oxidative stress in rats [8].

Drosophila melanogaster, a fruit fly now commonly used as a multipurpose model organism for biomedical science research due to its economic advantage to culture in the laboratory, rapid generation time, shorter life cycle, high production rate and genetic modifications possibilities [26]. Its lifespan is between 40-120 days, depending on diet and environmental stress conditions. Some diets, such as those rich in free saccharides and cholesterol, can reduce fruit flies life span [27]. This present study was designed to examine the free radical scavenging property of coconut water and the antioxidant effect of its dietary inclusion in an oxidative-induced D. melanogaster.

Figure 1a shows a sample of fresh Cocos nucifera fruits (thirty) purchased from a native market in Akungba-Akoko, Ondo State, Nigeria. The plant was identified and authenticated at the Department of Plant Science and Biotechnology, Adekunle Ajasin University, Akungba, Akoko, Ondo State. The shell of the coconut fruit was removed and washed properly to avoid contamination. The cotyledon was broken (Figure 1b) to extract the water. It was then broken, and the water was collected in labeled vials, kept in a deep freezer until use. 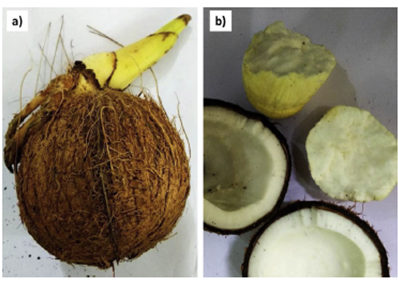 The flies were exposed to these treatments for five days and sustained at ambient temperature. All experiments were done in triplicates [19].

The basal diet was based on the traditional cornmeal medium containing 1% w/v brewer's yeast, 2% w/v sucrose, 1% w/v powdered milk, 1% w/v agar and 0.08% v/w nipagin. The diet was prepared once a week. The coconut water supplemented diet was prepared by adding 0.1mg/g and 1.0 mg/g coconut water, respectively. The media were then mixed and distributed into vials [19].

The flies were transferred every five days to prevent overpopulation and contamination and also to breed new flies. The following method was employed for the transfer of the flies from old jars to new jars. A funnel was placed on the new jar, while the old jar was gently tapped on a soft padded surface (towel) so that the flies fall to the bottom of the jar. The jar mouth's cotton plug was quickly removed and then placed on the inverted funnel and slightly banged on the padded surface. Thus, the flies were transferred into a new feed [19].

2.6 Preparation of sample for biochemical assays

Using a Teflon homogenizer, the anesthetized flies were homogenized in 0.1M phosphate buffer, pH 7.4and, the resulting homogenates were centrifuged at 10,000g, 4°C for 10 minutes in a Kenxin refrigerated centrifuge Model KX3400C (KENXIN Intl. Co., Hong Kong). After that, the supernatant was removed from the pellet into an Eppendorf tube used for some bioassays.

Total phenol content was quantified as described by Singleton et al. [29], total flavonoid content as stated by Meda et al. [30], but with slight modifications. Free radical scavenging activity of coconut water was investigated through the 2, 2-azino-bis-3-ethylbenzothiazoline-6-sulfonate (ABTS) and 2, 2-diphenyl -1- picrylhydrazyl assays as described by Re et al. [31] and by Brand-Williams et al. [32], respectively. While the Ferric reducing antioxidant power was determined using the method of Oyaizu [33], Iron chelating ability was measured according to Minotti and Aust [34] method, with a slight modification by Puntel et al. [35].

A modified [36] method was employed for the anti-lipid peroxidation assay. A reaction mixture containing 30 µL of 0.1M pH 7.4 Tris-HCl buffer, coconut water (0-100 µL) and 30 µL of 250 µM freshly prepared FeSO4 was mixed with 100 µL S1 fraction briefly. The volume was top-up to 300 µL with distilled water and incubated at 37▢ for 1hour. 300 µL 8.1% Sodium dodecyl sulphate (SDS) was added to the reaction mixture for colour reaction development, afterward followed by the addition of 500 µL of acetic acid/HCl (pH 3.4) and 500 µL 0.8% thiobarbituric acid (TBA) mixture. This mixture was incubated at 100▢ for 1hour. The produced thiobarbituric acid reactive species (TBARS) from the reactions were measured at 532nm using a JENWAY UV-Visible spectrophotometer. The absorbance was compared against the malondialdehyde (MDA) standard curve.

Data were pooled and expressed as mean ± standard deviation (SD). All results were statistically analyzed using the Graph pad PRISM (V.5.0) software. Levels of significance were accepted at p < 0.05, p < 0.01, and p < 0.001 for One-way analysis of variance (ANOVA), while the IC50 (concentration of extract that will cause 50% reducing activity) was determined using linear regression analysis [37].

The extract scavenged DPPH radical in a concentration-dependent manner (0-133 μg/mL).

Figure 6 shows the effect of dietary inclusion of coconut water on brain malondialdehyde (MDA) content in Alcl3 induced amnesic flies. The result reveals that the MDA content in flies fed with Alcl3 was significantly (p < 0.05) higher than the control group. However, 0.1% and 1% CW dietary inclusion significantly lowers (p < 0.01 and p < 0.001 respectively) the MDA content against the control without CW. 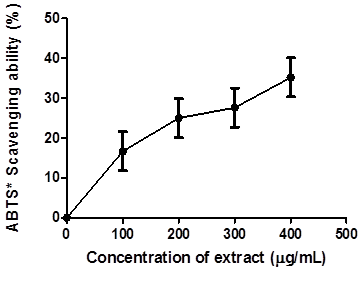 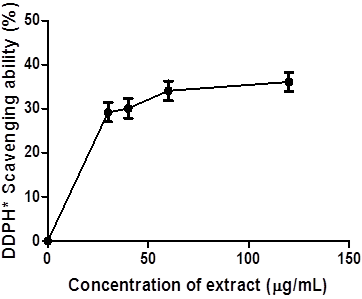 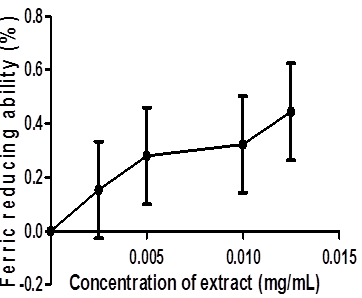 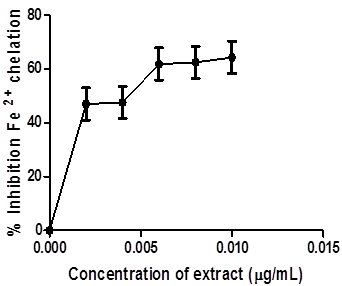 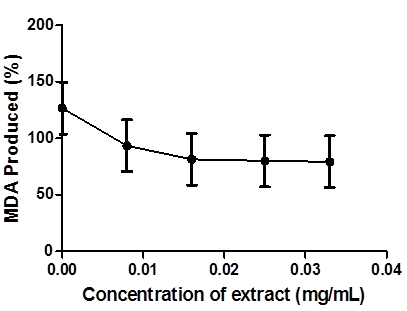 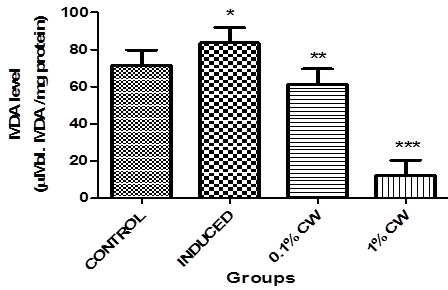 Over the years, coconut has been extensively explored for its use in different fields. Results from this study revealed high phenol and flavonoid content, consistent with a study on the phytochemical analysis of Cocos nucifera endosperm by Offor et al. [38], conferring its antioxidant ability to significantly lower cellular oxidative stress (Oboh et al. [28]. Flavonoids also function as signaling molecules exerting a positive effect on cognitive function [40]. Phenolic compounds derived mostly from plants possess an antioxidant potential to manage oxidative stress-associated diseases like Alzheimer's and other neurodegenerative diseases [41, 42].

The scavenging ability and the reducing power of coconut water (CW) could be attributed to the total flavonoid and total phenol content. The increase in the scavenging ability and the reducing power of CW in a dose-dependent manner could also be due to the total phenolic concentration [18]. DPPH is a stable nitrogen-centered free radical donor that is stabilized by accepting an electron or hydrogen [43]. The ABTS and DPPH radical scavenging ability of CW results revealed that the extract can prevent radical-induced oxidative damage because phenolic compounds possess hydrogen-donating abilities to function as an antioxidant. Thus, reducing stable DPPH radical [44] and converting the coloured ABTS cation into a colourless form [45].

A similar trend was also observed when the antioxidant activity of the coconut water sample was assessed by the ferric reducing antioxidant power (FRAP) assay, a new antioxidant defence mechanism that is affected by the transfer of electrons and a hydrogen atom [45]. The antioxidants present in the extract can reduce ferric ion (Fe3+) to ferrous ion (Fe2+), which forms a blue complex that is absorbed at 700 nm [46]. Accordingly, several reports have established a correlation between the health benefit of polyphenolic-rich food and its antioxidant effects [47]. Additionally, current findings show that phenolic compounds exhibit health-promoting effects ranging from radicals scavenging to metal chelation responsible for lipid peroxidation [48]. Several animal models have been used to investigate the oxidative stress hypothesis of aging [49].

Specific reports have stated the implication of reactive oxygen species generation and oxidative stress in reducing D. melanogaster's life span [50]. The TBA assay was employed to measure the CW’s scavenging ability of radicals generated in lipid peroxidation. The study revealed that both concentrations (0.1% and 1.0%) dietary inclusions of CW significantly reduce MDA content in the tissue homogenate, which agrees with Das et al. [51], who reported that coconut water significantly reduces free radical generation and has antioxidant activity. The increase in the scavenging activity correlates with a decrease in the MDA level as the induction progresses with the utilization of CW by the brain. Studies have shown that amnestic mild cognitive impaired patient’ exhibit patterns of memory impairment and oxidative stress, similar to those observed in Alcl3-induced amnesic flies' [52, 53]. Therefore, a reduction in the brain MDA (marker of lipid peroxidation) level of flies treated with CW extract indicates a marked improvement in the brain antioxidant status, which could be due to phenolic present in the extract (Table 1). This shows that coconut water extract is capable of inhibiting the formation of lipid peroxidation.

The obtained results show that coconut water extract has antioxidant property, inhibited prooxidant-induced TBARS production, scavenged free radicals, chelated Fe2+in vitro and was also able to reduce MDA level in the brain of Alcl3 induced amnesic D. melanogaster fed with coconut water supplemented diet. These abilities could be linked to the action of polyphenolic compounds present in it. Therefore, this study suggests that coconut water could provide a cheap therapeutic means for neurodegenerative disease management/treatment. Further studies should be done to isolate and characterize bioactive compounds present in coconut water.

The contributions of all the authors and the supports of the technicians at biochemistry department, Adekunle Ajasin University are immensely appreciated.