Pregnancy related diseases can lead to medical complications that extend beyond the pregnancy for both mother and child. Some of these diseases such as preeclampsia, HELLP (hemolysis, elevated liver enzymes, low platelet count), and AFLP (acute fatty liver pregnancy) are clinical syndromes of multi-factorial origin. The final common pathway for the development of these multi-system disorders may be maternal endothelial dysfunction due to oxidative stress [6]. The placenta may play a crucial role in the production of oxidants that lead to this damage. Highlighting this theory, during preeclampsia it has been demonstrated that lipid oxidation is increased and the levels of glutathione and vitamin C are also increased. Furthermore, the activities of antioxidant enzymes superoxide dismutase, glucose 6-phosphate dehydrogenase, glutathione peroxidase, and glutathione S-transferase are decreased in preeclamptic placentas [7,8]. Reduced levels of total thiol content and superoxide dismutase, observed in the plasma of preeclamptic women, increased significantly after delivery [8]. The products of lipid oxidation may serve as potential early-stage biomarkers; therefore, investigation into the presence, quantity, and predictive nature (biomarkers) of fatty-acid oxidation products such as lipid aldehydes in placenta and other biological fluids is prudent. Furthermore, the uncovering of biomarkers in placenta may also provide a diagnostic measure for the extent of oxidative stress experienced during pregnancy. This measure of oxidative stress may then be useful in correlation with, and eventually prediction of outcomes.

Traditionally, malondialdehyde (MDA) has been the primary marker for oxidative stress, [9] and typically, the 2-thiobarbituric colorimetric assay has been extensively used for quantitation of MDA in various biological matrices [10,11]. This assay has come under scrutiny in the past few years due to its lack of specificity [10,11]. Consequently, numerous other analytical strategies have been employed to quantitate MDA, as well as other biomarkers. For example, direct infusion mass spectrometry has recently been used to quantitate lipid-based biomarkers in serum from preeclamptic women [12]. This study utilized an untargeted lipid profiling approach and demonstrated that there are global changes in the lipid profiles. Additional methods include GC/MS, HPLC with UV detection, and more recently LC-MS and LC-MS/MS [13-16].

The investigation of lipid aldehydes by LC-MS is complicated by the fact that underivatized lipid aldehydes do not produce a strong mass spectrometric response under atmospheric pressure ionization conditions. To enhance the mass spectral response, derivatization can be employed. This is highlighted by recent elegant work of Andreoli and co-workers who employed 2,4-dinitrophenyhydrazone (2,4-DNP) derivatives and LC-MS/MS to study lipid aldehydes [12]. In this paper they developed and validated a method to quantitate lipid aldehydes in breath condensate following derivatization with 2,4-DNP.

Seven key lipid aldehydes that have been implicated to be produced under oxidative stress conditions were initially selected for study here [9,12]. These include MDA, acrolein, hexanal, heptanal, nonanal, 4-hydroxyhexenal, 4-hydroxynonenal. By investigating this small targeted set of lipid-analytes there remained the possibility that a number of other potential biomarkers derived from lipid oxidation may be missed; therefore, there was also interest in developing methodology to ‘profile’ biological samples for other lipid aldehydes produced under oxidative stress conditions.

In reviewing different approaches, a second class of aldehyde derivatization reagents was found that possess properties that may render them superior to 2,4-DNP. This other class of reagents, termed Girard reagents, also employs hydrazone formation for covalent attachment (Figure 1) [17,18].

This predictable fragmentation in the mass spectrometer allows samples to be profiled for all species that react with the derivatization reagent. Molecules that react with Girard reagent T will fragment losing 59 Da (the trimethylamine moiety). This equates to a ‘neutral’ loss of 59 Da for the aldehyde-derivative. Thus, with biological samples it is possible to ‘profile’ a diseased sample (e.g., hypertensive placentas) versus a control sample (e.g., normal placenta) to explore for unexpected oxidation products. This profiling has also been used recently by Johnson and co-workers in their studies of ketosteroids [19].

In the Department of Pathology at University of Texas Southwestern Medical Center, approximately 100 mg (each) of chorionic tissue was collected from de-identified freshly delivered placentas. Following procurement, the tissue samples were immediately frozen on dry ice and stored at -80 ± 10 ºC until further processing. IRB approval was obtained for this study and patients signed informed consent to be part of the study.

Solutions of the lipid aldehydes were prepared in 100% acetonitrile at a concentration of ~ 1000 ng/mL. These stock solutions were used for the direct infusion experiments to determine the observed mass-to-charge ratios under electrospray ionization conditions. This stock solution was also used as a chromatographic standard during the LC-MS/MS method development. Serial dilutions of the 1000 ng/mL stock standard in acetonitrile produced standards with concentrations of 10 ng/mL to 1000 ng/mL. These lipid aldehyde standards were reacted with Girard reagent T and worked up to produce calibration and quality control standards. All lipid aldehyde solutions were stored at -10 to -25 °C when not in use.

Placental samples were thawed and ground in an aqueous environment (100 mg placenta in 1.0 mL Milli-Q water). Following grinding, the suspended tissue was centrifuged (12,000 rpm for 10 min at room temperature) and the supernatant was removed and extracted two times with 1 mL of ethyl acetate. The ethyl acetate layers were combined and the solvent was removed using a vacuum centrifuge. The residue was dissolved in 100 µL of acetonitrile prior to derivatization.

Derivatization reactions were conducted by incubation of the solutions of lipid aldehydes or placenta (100 mL) with 12 mM GirT (100 mL). GirT (~50mg) was dissolved using 20 mL of acetonitrile and then acidified with 400 µL of formic acid. The reactions were allowed to proceed for at least 2 hours at room temperature and then put under a steady stream of N2 to complete dryness; if not all samples were under N2 they were put in the freezer (-10 to -25 °C) in order to halt the reaction. The samples were then reconstituted with 300 mL of water:methanol (98:2, v/v) and mixed well. The standards were then analyzed by LC-MS/MS with positive electrospray ionization and a 20 mL injection volume.

The ions associated with each aldehyde were obtained by direct-infusion mass spectrometry on a Sciex API-3000 Tandem Triple-Quadrupole Mass Spectrometer equipped with an electrospray ionization source and interfaced with a Harvard Apparatus syringe pump. The product ions for each of the precursor ions were subsequently determined of the aldehydes. 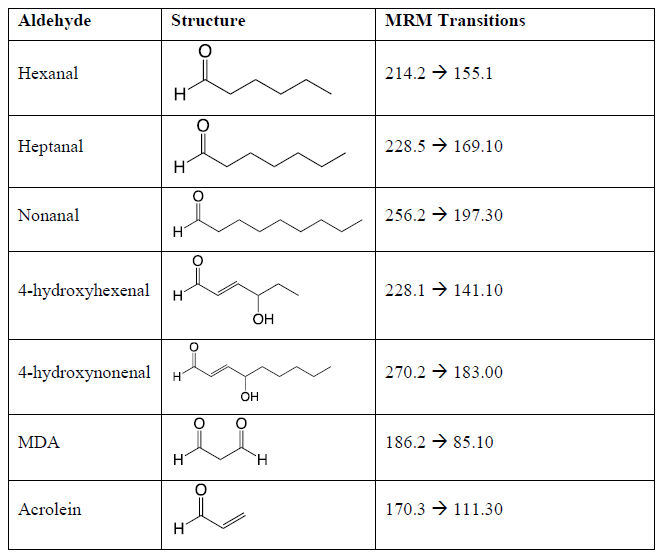 3.2 Optimization of the Placental Sample Preparation

A number of different homogenization and extraction methodologies can be found in the analysis of oxidized lipids in biofluids and tissues [27,28]. Four different homogenization - extraction methods were compared to determine the best method for the analysis of oxidized lipids in placental tissue. The following four different sample preparation techniques were investigated:

Homogenization in LiCl aq. with Chloroform:Methanol Extraction (Bligh-Dyer method) [29] was consistently found to provide the most efficient extraction.

3.3 Optimization of the Derivatization Reaction

GirT was selected as the derivatization agent because it produces positively charged derivatives and its potential to be used to profile the molecules that contain an aldehyde or ketone. The derivatization procedure was based on previous examples of hydrazone formation with Girard reagents [12]. Acetonitrile was selected as the solvent for the derivatization due to its compatibility with GirT and the oxidized lipids. A small portion of formic acid was used in the reaction to catalyze the formation of the hydrazone and due to its compatibility with mass spectrometry.

The length and the duration of the reaction were examined. Reaction times of 0.5, 1.0, 2.0 and 3.0 hours were investigated using concentrations of the oxidized lipid aldehydes from 10 to 1000 ng/mL, and 12 mM concentration of GirT. The reaction was found to not be complete at 0.5 hours. Reactions of 1, 2 and 3 hours provided similar results to each other, thus a reaction time of 2 hours was selected. The optimal temperature of the reaction was examined. Reaction temperatures of 23ºC (room temperature) and 37ºC were investigated found to produce similar results; therefore, subsequent reactions were conducted at room temperature.

The addition of an antioxidant was investigated to prevent the spontaneous oxidation of lipids during the sample preparation procedure. Reaction in the presence of and in the absence of butylated hydroxytoluene (2,6-di-tert-butyl-p-cresol, BHT, 0.01 M in the reaction), a common antioxidant, were investigated. The presence of BHT did not alter the reaction of the solution standards, thus the presence of an antioxidant was not deemed necessary using this methodology. This is similar to previous results obtained with exhaled breath condensate and oxidized lipids [12].

3.4 Optimization of the Chromatography

Optimal chromatographic resolution and peak shape was achieved using a Varian ODS-3 (5m) reversed-phase column (2.1 x 50 mm) and gradient elution in the presence of the volatile ion-pairing reagent HFBA. Representative chromatograms for each of the lipid aldehydes are presented in Figure 2. 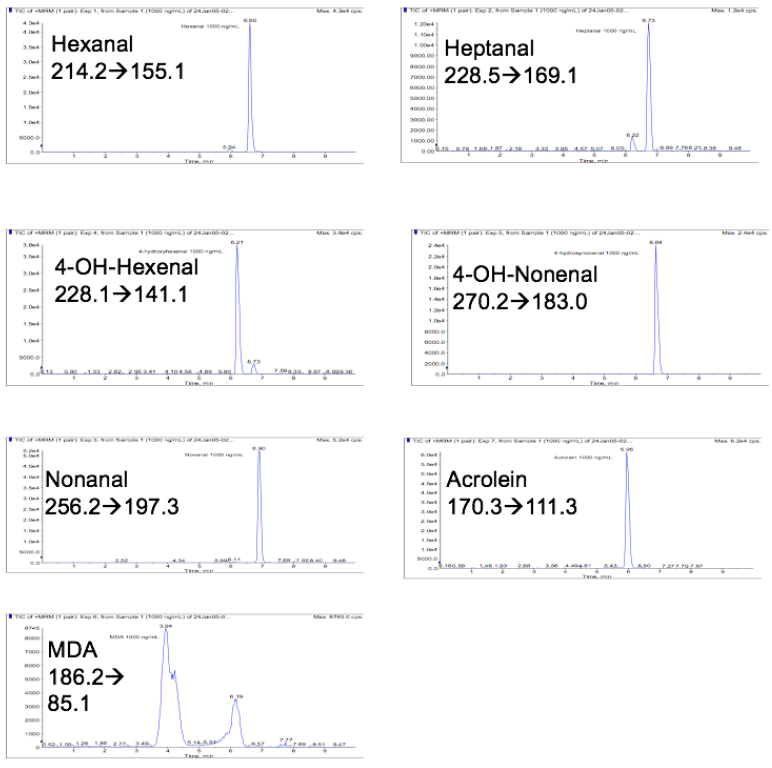 The linear concentration range was determined to be from 10 to 1000 ng/mL for the lipid aldehydes studied. This is the working concentration range for this study. The full range may be greater. A weighted linear regression of (1/×) was used. Interday values for slope, intercept and correlation coefficient values are depicted in Table 2 using data from three separately-prepared calibration curves. It is noteworthy for these initial experiments that an internal standard was not used; however, a spiked lipid aldehyde could be used as an internal standard. The observed accuracy and precision of the method was appropriate for the aims of the study without the use of an internal standard.

The limit of detection was not rigorously examined. All seven analytes demonstrated a signal-to-noise ratio significantly greater than three-to-one at the 10 ng/mL level. Thus, the actual limit of detection may be much lower than 10 ng/mL (in solution).

Table 4: Quantitation of oxidized lipids in control placenta samples and placenta samples from women with preeclampsia (PE). Concentrations are expressed as µg of analyte per gram of placenta processed.

The placental tissue samples were then analyzed employing the neutral loss scan (Precursor-59). The metabolite ID software package (Applied Biosystems, Foster City, CA) was then used to profile the differences in the placental samples from normotensive and hypertensive mothers. The samples were compared on a one-by-one basis over the retention time window 2-8 minutes. Differences were scanned over the mass-to-charge ratios 80 – 400. Seven nominal masses were consistently observed: m/z of 299, 236, 205, 214, 200 158, and 144. Investigations continue on the molecular identities of these species. Interestingly, the m/z of 200 corresponds to the molecular weight of pentanal, a lipid oxidation product that has not been previously implicated in oxidative stress disorders.

A new method has been developed and qualified to analyze seven key oxidized lipids in placental tissue. The method employs derivatization of the lipid aldehydes with GirT to increase the sensitivity. The method was found to be sufficiently accurate, precise, and sensitive for quantitation. The use of the derivatization agent GirT was found to substantially increase the number of lipid aldehyde species that can be readily quantitated in biofluids using electrospray ionization and LC-MS/MS.

An extension of this method using neutral loss scanning allows profiling of placental samples for unexpected oxidized lipids (untargeted lipid aldehyde-omics). This methodology provides a unique top-down approach to profile biological samples for oxidized lipids. The neutral-loss scanning technique is applicable to any analyte that reacts with GirT, thus this methodology provides a technique that should be applicable to profiling any biofluid or tissue for unexpected products of lipid oxidation.

This method was used to analyze a small number of placental samples from normotensive and hypertensive mothers. It was determined that placental tissue from mothers with preeclampsia had relatively lower amounts of oxidized lipids when compared to control placental tissue. This differential expression may provide insight into potential biomarkers or biological profile of lipid aldehyde expression in preeclampsia.

This research was funded by the Jerry H. Hodge School of Pharmacy at Texas Tech University health Sciences Center.