Background: Staphylococcus aureus are among the most important and several pathogens in human infections.

Objectives: The objectives of this study are to evaluate the efficacy of the agglutination test in the detection of Staphylococcus aureus in the laboratory and to identify the factors associated with staphylococcal infections.

Methods: It is a prospective study of 100 isolates of staphylococci in a period of nine months from May 2021 to January 2022 in the University Hospital of Befelatanana. Results: Among of the 100 isolates of staphylococci, 49 (49%) were represented by Staphylococcus aureus. Concerning the prediction performance of the agglutination test, it has a sensitivity of 93.8%, a specificity of 100%, a positive predictive value of 100% and a negative predictive value of 94.7%. Concerning the associated factors, the men (63%) (p=0.002), the patients aged 40 to 59 years (63%) (p=0.3; NS) and with suppuration (75%) (p=0.004) were the most affected by Staphylococcus aureus. Moreover, Staphylococcus aureus was often identified in pus samples (72.4%) (p=0.0009).

Conclusion: In brief, agglutination test is a good test and can replace the standard gold test for the detection of Staphylococcus aureus.

Staphylococcus, group of spherical bacteria, the best-known species of which are universally present in great numbers on the mucous membranes and skin of humans and other warm-blooded animals. The term staphylococcus, generally used for all the species, refers to the cells’ habit of aggregating in grapelike clusters [1]. They are observed in multiple clinical situations, in community acquired infections and nosocomial infections [2]. Among staphylococci, Staphylococcus aureus (S. aureus) is one of the major human pathogens in which it is responsible for toxic shocks, food borne diseases and especially a wide spectrum of suppurative infections [3].

Thus, the aims of this study are to evaluate the efficacy of the agglutination test in the detection of S. aureus in the laboratory and to identify the factors associated with Staphylococcal infections in order to improve the care of the patient.

2.1 Type and period of study

It is a prospective study of 100 isolates of staphylococci in a period of nine months from May 2021 to January2022 in the University Hospital of Befelatanana.

In the beginning, the isolates were identified according to appearance, odor and color of bacterial colonies. Then, the identification of Gram-positive cocci on microscopic examination and the positivity of catalase confirms the diagnosis of staphylococcal infection. For the diagnosis of S. aureus infection, we performed 2 tests simultaneously. The first test is the inoculation of the strain on the baird-parker culture medium. The second is the agglutination test. Baird-parker require incubation at 37°C in an oven for 24 hours. The identification on baird-parker culture medium represents the gold standard test [4-7]. But this test requires several conditions that make it more difficult to perform compared to the agglutination tests. Indeed, a petri dish by strain is necessary for the test. In addition, we need to buy a box of baird-parker culture medium that is quite expensive. Finally, the egg yolk tellurite emulsion must be used, which will be mixed with the baird-parker agar during the preparation of the culture media. The egg yolk tellurite emulsion is necessary for the good growth of S. aureus strains. Indeed, strains of staphylococci will reduce tellurite that will become a black tellurium causing a black staining of staphylococci colonies. Similarly, there is proteolysis of egg yolk proteins, resulting in a clear (transparent) halo around the colony. The presence of this halo is specific to isolate of S. aureus (figure1 and figure 2). 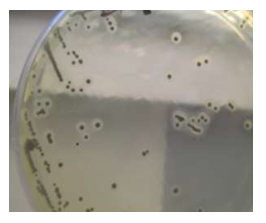 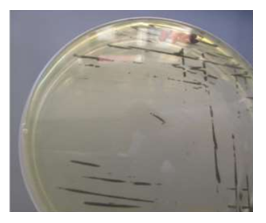 Concerning the agglutination test, staphytect Plus is a latex slide agglutination test for the differentiation of S. aureus by detection of clumping factor, Protein A and certain polysaccharides found in methicillin resistant S. aureus (MRSA) from those staphylococci that do not possess these properties. This test is very easy to do. First, we dispense one drop of test latex onto one of the circles on the reaction card and one drop of control latex onto another circle. After, we pick up and rock the card for up to 20 seconds and observe for agglutination under normal lighting conditions. The result is positive if agglutination of the blue test latex particles occurs within 20 seconds. It identifies the isolate as S. aureus (figure 3). A negative result is obtained if no agglutination occurs and a smooth blue suspension remains after 20 seconds in the test circle. It identifies the isolate as a non-aureus Staphylococcus (figure 4). 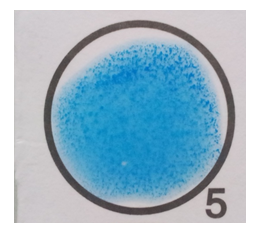 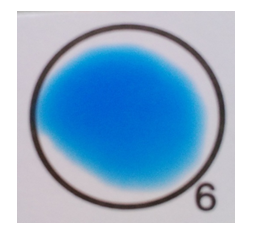 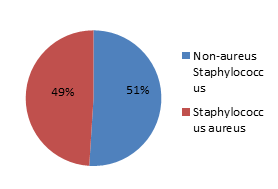 The authorization of this study by an ethics committee was not necessary because we analyzed isolates of bacteria. Nevertheless, the authorization of the director of the establishment was obtained before the data were collected in the registers. Likewise, the seizure was done anonymously to maintain confidentiality.

The entry and processing of data were performed on Epi-info 3.5.2 software. Proportions are presented as numbers (percent) and were compared using the chi-square test. Results were considered significant if p was 0.05 or less, with a 95% confidence interval.

Prediction performance of the agglutination test

In this study, almost half of identified staphylococcal isolates were represented by S. aureus. Indeed, S. aureus is a major bacterial human pathogen that causes a wide variety of clinical manifestations [8]. Infections are common both in community-acquired as well as hospital-acquired settings and treatment remains challenging to manage due to the emergence of multi-drug resistant strains such as MRSA [9-10]. S. aureus is found in the environment and is also found in normal human flora, located on the skin and mucous membranes (most often the nasal area) of most healthy individuals [8]. S. aureus does not normally cause infection on healthy skin; however, if it is allowed to enter the bloodstream or internal tissues, these bacteria may cause a variety of potentially serious infections [8]. Transmission is typically from direct contact. However, some infections involve other transmission methods [11]. Thus, a good identification of staphylococci allows better management of the patient.

Concerning the associated factors, the patients aged 40 to 59 years were the most affected by bacterial infection with S. aureus but without significant difference. Thus, all age groups can be concerned. However, the literature confirms that very young children and elderly or ill patients in hospitals and nursing homes are particularly susceptible to MRSA infection, which is difficult to treat because of its resistance to most antibiotics [1]. Regarding gender, men were significantly more affected by S. aureus infection than women. Our study in 2019 was found the same result [12]. Indeed, more men work than women. Thus, they are more exposed to the risk of infection. Likewise, their toxic habits can make them more vulnerable such as tobacco and alcohol. Concerning the clinical information and the types of samples, S. aureus infections were very common in patients with suppuration with a very significant difference. Other studies have also found a high prevalence of S. aureus infections in the suppurations [13-14]. Indeed, staphylococcus is a ubiquitous bacterium frequently found on the skin. It is one of the main etiological agents of superficial and deep suppurative infections [15].

Authors have declared that no competing interests exist.