Background: Adenoma–borderline tumor–carcinoma sequence, which was substantiated in the pathogenesis of ovarian mucinous carcinoma, could be extrapolated to that of primary retroperitoneal mucinous cystadenocarcinoma. Nevertheless, direct evidence is still insufficient due to its rarity.

Case: A 34-year-old Japanese woman with huge unilocular retroperitoneal cyst (16×8 cm) refused surgery. The cyst was gradually shrunken, measuring 10×4 cm at the age of 40. One year later, however, remarkable enlargement of the cyst (17×14 cm) with the emergence of three mural nodules was noted. The cyst was surgically removed intact. Histologically, a benign single layer of mucin-producing epithelial cells lined most of the cystic wall with focal microinvasive adenocarcinoma localized to the bases of mural nodules.

34-year-old Japanese married woman, gravida 0, with a past history of appendectomy in her childhood received her first gynecological examination in the neighboring hospital. Multiple uterine fibroids and a unilocular cyst measuring 16×8 cm in the right upper abdomen were detected by ultrasonography. In magnetic resonance imaging (MRI), the unilocular cyst was located in the retroperitoneal space and was apart from bilateral ovary. The cyst content showed low signal intensity on T1-weighted image (T1WI) (Figure 1A) and high intensity on T2WI (Figure 1D), which was a characteristic pattern of serous fluid. From these findings, the primary diagnosis was retroperitoneal Mullerian cyst [11]. Although the serum tumor markers examined were all within the normal range (CEA 0.2 ng/ml, CA19-9 14 IU/ml, CA125 9 IU/ml), the tumor markers in the aspirated content fluid were markedly high (CEA 730 ng/ml, CA19-9 25167 IU/ml). The patient consistently refused to undergo operation, which was strongly recommended by the attending physicians. Afterwards, the patient was followed up every 6 months, monitoring the tumor size and being alert for potential emergence of mural nodules. The size of the tumor was gradually decreased and the serum tumor markers remained within the normal ranges. 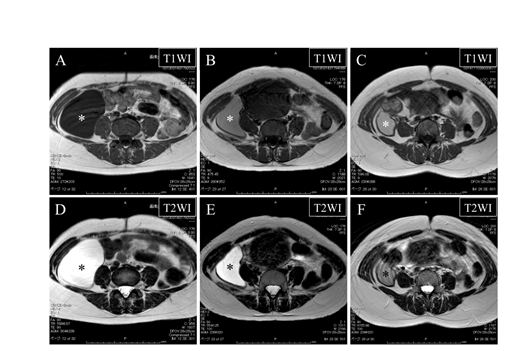 Figure 1: Magnetic resonance images at the ages of 34 (A and D), 38 (B and E), and 40 (C and F) showing gradual shrinkage of the retroperitoneal cyst (asterisks).

At the age of 38, the patient was referred to our hospital due to the relocation. At her initial visit, ultrasonography confirmed the presence of a unilocular cystic tumor measuring 15×5 cm in the right upper abdomen. In MRI, the cyst content showed intermediate signal intensity on T1WI (Figure 1B) and high intensity on T2WI (Figure 1E). This signal pattern was consistent with mucus, allowing us to reach the diagnosis of primary retroperitoneal mucinous cystadenoma. In complying with the patient’s intent, half-yearly follow-up was continued. At the age of 40, the cystic tumor was found to have gradually shrunk, reaching to 10×4 cm and the cyst content showed intermediate signal intensity both on T1WI and on T2WI (Figure 1C and 1F).

At the age of 41, one year after her previous visit, sudden re-increase of the tumor size to 17×14 cm was detected by ultrasonography. The patient complained of abdominal fullness. In MRI, emergence of three mural nodules measuring about 1 cm was also detected (Figure 2A). These mural nodules exhibited high signal intensity on diffusion-weighted imaging (DWI) (Figure 2B) and low value on apparent diffusion coefficient (ADC) mapping (Figure 2C), strongly suggesting that they were composed of malignant cells. No lymph node or organ metastasis was suspected in the enhanced thoraco-abdominal computed tomography (CT). The patient accepted to undergo surgical removal of the cystic tumor.

Figure 2: Magnetic resonance images at the age of 41 showing remarkable enlargement of the retroperitoneal cyst (asterisk) accompanied by the emergence of mural nodules (arrows)

Note that the mural nodules (arrows) exhibit high signal intensity on DWI (B) and low value on ADC map (C), strongly suggesting that they are composed of malignant cells.

At laparotomy, a cystic tumor of adult head size was vaulting the peritoneum and displacing the ascending colon medially (Figure 3A). The retroperitoneal tumor was covered by the outermost capsule of the ascending colon and was engaged in the right paracolic gutter. While the uterus was enlarged to over newborn head size due to multiple fibroids, bilateral fallopian tube and ovary appeared normal. The retroperitoneal tumor had no direct connection with the surrounding organs. Small amount of thin bloody ascites, which proved to be negative for malignancy in the intraoperative pathological consultation, was accumulated in the Douglas pouch. The tumor was carefully separated from the ascending colon and was successfully removed intact. The resected cystic tumor was opened in the operating room, exposing three fragile mural nodules on its inner surface. One of the mural nodules was submitted for the intraoperative pathological diagnosis. The nodule was mostly composed of necrotic tissue and was devoid of any obviously malignant cells. Since the patient had desired to preserve her fertility, a hysterectomy and salpingo-oophorectomy were withheld.

On gross examination, the resected specimen was a unilocular, smooth-surfaced, cystic tumor measuring 20 cm in diameter. The cyst contained dark-brownish mucin with papillary growth of three fragile nodules on its inner surface (Figure 3B). On histological examination, a benign single layer of mucin-producing high columnar epithelial cells lined most of the cystic wall. Although the protruded portions of the mural nodules exhibited extensive necrosis that did not allow for further histological evaluation, minimal invasion of atypical microglandular structures into the surrounding fibrous stroma was detected at their basal portions (Figure 3C). The immunohistochemical analysis showed that benign epithelial cells as well as adenocarcinoma cells were negative for calretinin (mesothelial marker) and were positive for cytokeratin 7 (epithelial marker) (Figure 3D). From these findings, the final pathological diagnosis was mucinous cytadenoma with focal microinvasive adenocarcinoma arising in the retroperitoneum. 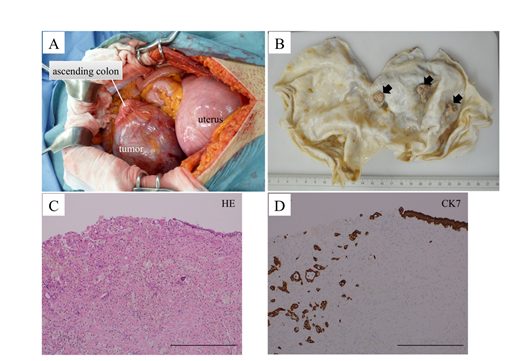 Figure 3: (A) Intraoperative photo showing the retroperitoneal tumor, uterus, and ascending colon.  The cystic tumor is vaulting the peritoneum and displacing the ascending colon medially.

Postoperative recovery of the patient was uneventful. Since no residual malignant lesion was suspected in postoperative 18F-fluorodeoxyglucose (FDG)-positron emission tomography (PET)/CT, additional treatment including secondary laparotomy or systemic chemotherapy was not offered. The patient is doing well without evidence of disease 12 months after the operation.

The present case afforded an invaluable opportunity to observe the natural course of primary retroperitoneal mucinous tumor owing to the patient’s unbending determination not to undergo an operation. In this case, the remarkable re-enlargement and emergence of three mural nodules suddenly took place in the retroperitoneal unilocular cyst after seven years of follow-up. These mural nodules were histologically composed of microinvasive mucinous adenocarcinoma focally scattered in the benign epithelial lining of mucinous cystadenoma. These findings strongly suggest that mucinous cystadenocarcinoma arose from the pre-existing benign mucinous cystadenoma. This is the first case report that lends evidence for the presence of adenoma?borderline tumor?carcinoma sequence in primary retroperitoneal mucinous tumor.

According to a meta-analysis by Myriokefalitaki et al., 73 female and 5 male cases of primary retroperitoneal mucinous cystadenocarcinoma had been reported by 2015 [12]. Median age at diagnosis was 42.0 years (range 18?86 years), with women being significantly younger than men (42.0 years vs. 62.2 years, p=0.005). This apparent preponderance of premenopausal women suggests that certain specific milieu such as high estrogen concentration could contribute to its pathogenesis. Follow-up data were identified in 57 women (range 1-130 months, with a median of 15 months). During the follow-up period, 23 recurrences (40%) with median time from diagnosis to recurrence of 8 months (range 1-58 months) and 14 deaths (25%) were reported, illustrating relatively poor prognosis of this disease.

In the ovary, the response rate to platinum-based chemotherapy for invasive mucinous carcinoma is no more than 12.5% [14]. Considering the morphological similarity between ovarian and retroperitoneal mucinous carcinoma, it is not prudent to expect high response rate of chemotherapy against the retroperitoneal counterpart. In fact, the same meta-analysis failed to demonstrate any beneficial effect of adjuvant chemotherapy on the postoperative prognosis of primary retroperitoneal mucinous cystadenocarcinoma [12]. From these data, we believe that chemotherapy should be reserved for the patients with obvious residual lesion after the operation. In the preset case, since no residual lesion was suspected in the postoperative FDG-PET/CT, we did not offer adjuvant chemotherapy. Nevertheless, the presence of mural nodules in primary retroperitoneal mucinous cystadenocarcinoma has been reported to predict worse prognosis [15]. Considering that we were not able to extract any significant tumor marker elevated prior to the operation, close follow-up with regular systemic imaging should be warranted in the present case.

In MRI, the signal intensity of mucus varies depending on the degree of its mucin concentration, i.e., the signal intensity on T1WI becomes higher and that on T2WI becomes lower as the mucin gets thicker. This is in contrast with serous fluid, which almost invariably shows low signal intensity on T1WI and high intensity on T2WI. In the present case, the cyst content exhibited low T1WI signal and high T2WI signal in the initial MRI, leading to the wrong diagnosis of retroperitoneal Mullerian cyst, which was reported to contain serous fluid [11]. During the subsequent six years, however, the T1WI signal became higher and the T2WI signal became lower as the cyst has shrunk. Owing to this temporal change, which was considered to reflect the intracystic mucin condensation, we were able to reach the correct diagnosis of primary retroperitoneal mucinous tumor.

The authors report no conflicts of interest. The authors alone are responsible for the content and writing of the paper.