Objective: To find out the co-morbidities such as infections and micronutrient deficiencies in hospitallized children with severe acute malnutrition.

Results: 42% had diarrhea and 27% had acute respiratory tract infections as co morbid condition. Tuberculosis was diagnosed in 13% of cases. Anemia was present in 86% cases. Signs of vitamin B and vitamin A deficiency were seen in 24% and 6% cases. 97% children have inadequate vitamin D levels.

Conclusions: Timely identification and treatment of various co-morbidities is likely to break undernutrition-disease cycle, and to decrease mortality and improve outcome. Nearly all SAM patients have inadequacy of Vitamin D. So Vitamin D supplement should be given to all SAM patients.

Malnutrition or malnourishment is a condition that results from eating a diet in which nutrients are either not enough or are too much such that the diet causes health problems [1, 2]. Not enough nutrition is called undernutrition or undernourishment while too much is called over nutrition. According to the World Health Organization (WHO), malnutrition essentially means “bad nourishment” and can refer to the quantity as well as the quality of food eaten [3, 4]. Severe acute malnutrition affects an estimated 20 million children under 5 years of age and is associated with 1-2 million preventable child deaths each year [5]. Severe acute malnutrition (SAM) results from a nutritional deficit that is often complicated by marked anorexia and concurrent infective illness [6]. Similarly, malnutri-tion increases one’s susceptibility to and severity of infections, and is thus a major component of illness and death from disease. Globally, comorbidities such as diarrhoea, acute respiratory tract infections and Malaria, which results from a relatively defective immune status, remain the major causes of death among children with SAM [7]. Anemia, Vitamin B complex deficiency, Vitamin D deficiency, Vitamin A deficiency, Scurvy are the common micronutrient deficiencies seen in severe acute malnourished Children [8].

This study was carried out to find out demographic data and co-morbidities such as infections and micronutrient deficiencies in children with severe acute malnutrition.

This study was conducted in the Department of Pedia-tric Medicine, Sir Padampat Mother and Child Health Institute, attached to SMS Medical College, Jaipur from May 2020 to April 2021. A total of 125 cases presenting with severe acute malnutrition were enroll-ed of age 6 to 59 months. Severe acute malnutrition among children of six to fifty nine month of age is defined by WHO and UNICEF as any of the following [9] –

Children whose guardians refuse to give positive consent and those who died before taking necessary investigations were excluded. Children with major congenital malformations and those with chronic sys-temic diseases such as chronic kidney disease, chronic liver disease were also excluded. This study was descriptive type of observational study. The clinical and the demographic information were recorded on a pre-structured proforma, together with the detail history, physical and detailed systemic examination. Weight, length/height, Mid-Upper Arm Circumfer-ence (MUAC) and weight for height/ length were determined from each study participant. Socioecono-mic status of study subjects was assessed as advised by Modified Kuppuswamy scale of social classifica-tion which is based on occupation, education of the parents and income of the family [10]. Contact with tuberculosis was determined by either contact with open case of pulmonary tuberculosis recently or if there is history that the child was in contact of open case of tuberculosis in last two year of time. Immunization status of study subjects was assessed as per schedule of National Immunization Programme (NIP) [11].

Vitamin A deficiency defined clinically by presence of night blindness, Bitot’s spots, corneal xerosis and/ or ulcerations, corneal scars caused by keratomalacia. Vitamin B complex deficiency defined clinically by presence of angular stomatitis, cheilosis, glossitis, dermatitis, tingling/numbness in the extremities. Scurvy defined clinically by gum bleeding, loose teeth, Joint pains, Dry scaly skin, delayed wound-healing with suggestive findings of X-ray long bones. Vitamin D status (25 Hydroxy Vitamin D) in study subjects was determined by laboratory test by chemil-uminescence method using ADIVA CENTOR XP machine. Vitamin D level <10ng/ml was defined as deficient, 10 - 29 as insufficient while ≥30 as adequate level. A written, informed consent was obtained from parents. Clearance from Departmental Ethics Commi-ttee was taken prior to the start of the study. All participants had the option to withdraw from the study anytime during their hospital stay. All filled questionnaires were checked and coded on Microsoft Office Excel Worksheet and any missing data or information was actively searched from patient’s files. Descriptive cross tabulations were formed to examine for associations. 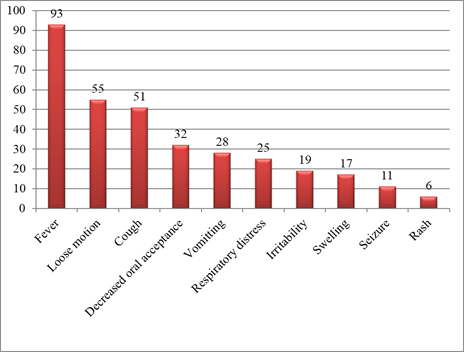 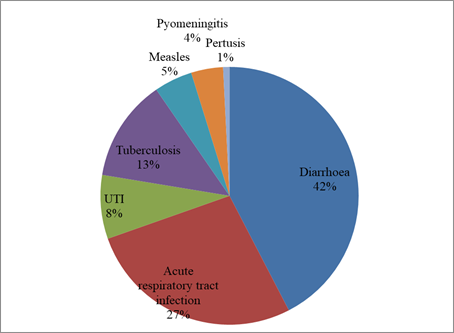 Figure 2: Distribution of cases according to their infectious co-morbidity.

Severe acute malnutrition is a well recognized emerg-ency situation with substantial morbidity and mortali-ty that requires immediate and effective treatment. Prompt initiation of appropriate treatment of both complications such as hypoglycemia, hypothermia, dehydration, electrolyte imbalance, infections and the underlying cause can significantly reduce associated morbidity and mortality. Most of the studies are related to infectious co-morbidities while only few studies are related to micronutrient deficiencies in severely malnourished children. Mean age of children reporting with malnutrition was similar to other studies and there was significant male predominance in malnourished children [14]. This may be due to ignorance about the health checkups of female children. So that they reach to the health facilities less than the boys. However, no definite causal relation-ship was found for this male preponderance. Our study show less coverage of immunization in our study area which is likely due to ignorance and unawareness about immunization.

In our study about two third children had the history of recurrent hospitalization; either by same illness or other illness. In study by Yoann Madec el al [15] history of recurrent hospitalization was present in 4.7 % children only. Unhygienic living conditions and poor socioeconomic status may be the cause of increa-sed rate of hospitalization in our study subjects. Rate of exclusive breast feeding found to be more in our study but weaning not started at recommended age which is predisposing factor for malnutrition. In present study, Diarrhoea was found to be the most common infectious co-morbidity. Acute respiratory tract infections were found to be the second most common co-morbidity followed closely by tuber-culosis. In a Colombian study, 68.4% of malnourished children were suffering from diarrhea and 9% had sepsis at the time of admission [16]. Two African studies also showed high incidence of diarrhea in SAM children of 49% and 67% [17, 18]. Though previous reports have described malnutrition as an important risk factor for pneumonia than for diarrhea [19], diarrhea was the major co-morbid condition found in our study. A study from Africa [20] also reported a comparable incidence of respiratory illness and tuberculosis (18% each) in admitted SAM children. Measles has severe consequences on the nutritional status. A previous Indian study [8] showed only 3.8% of children with past history of measles but we found a higher proportion. Malaria and HIV infection were previously reported as major co-morbidities with total prevalence of 21% and 29.2%, respectively [21] but in our study malaria, HIV were not found to be as co-morbid condition.

Overlapping nature of protein–energy malnutrition and micronutrient deficiencies is well understood and it is seen that lack of one micronutrient is typically associated with deficiency of others [22]. Anemia and vitamin D deficiency were the two most common micronutrient deficiencies associated with malnut-rition in our study, and this is consistent with the previous reports [23]. In previous studies vitamin D status is accessed by clinical examination and radio-logical findings but in our study vitamin D status is accessed by laboratory test. So we found higher incidence of Vitamin D deficiency. Absence of a comparative group, no biochemical evaluation for micronutrient deficiencies and non-assessment of contributing factors for these deficiencies were the main lacunae of the study. Our institute is the only referral centre and the major hospital that provides primary to tertiary care for children in this region. The geographic location of our hospital may have led to an enrollment bias. Our study suggest that malnutrition is predicted by age less than two years, failure to start complimentary feeding at recommended age, recur-rent hospitalization, taking unbalanced diet, lack or incomplete immunization and lower socioeconomic status.

Apart from nutritional rehabilitation, timely identify-cation and treatment of co-morbidities like diarrhea, acute respiratory tract infection, anemia and micronu-trient deficiencies is vital in malnourished children, so as to break undernutrition-disease cycle, and to decre-ase mortality and to improve outcome. Nearly all SAM patients have inadequacy of Vitamin D. So Vitamin D supplement need to be given to all SAM patients.