This paper presents a teenage patient followed at Motol University Hospital. She has irreversible damage to the lung parenchyma due to primary ciliary dyskinesia. At the molecular level, there is a defect of the outer dynein arms, given by DNAH5 gene mutation. Repeated viral and bacterial infections of the respiratory tract led to progressive worsening of respiratory functions. In 2018, two severe exacerbations occurred, accompanied by an episode of allergic rash caused by antibiotics. The airways went colonized by the fungus Exophiala dermatitidis, which is known chiefly as a pathogen of the skin and brain in immunocompromised persons. In cystic fibrosis, colonization of the airways is quite usual, but in PCD, it is unique. Although the clinical condition has improved, colonization of the lower respiratory tract persists despite complex treatment, which is limited by inborn prolongation of the QT interval.

We present a patient who has a unique combination of primary ciliary dyskinesia, inborn long QT interval and airway colonization by Exophiala dermatitidis.

The patient was born in 2005, and her development was normal during the first three years of life. Later, she suffered from frequent infections of the lower respiratory tract. In 2013, she developed severe pneumonia. A chest X-ray revealed the presence of multiple inflammatory infiltrates with an atelectatic focus in the right lung base. The recovery was slow despite appropriate antibiotic treatment. In September 2013, an HRCT of the lungs revealed atelectases with bronchiectases of the right middle lobe and lingula (Figure 1).

We performed a set of functional and laboratory tests to uncover an underlying chronic respiratory pathology. Cystic fibrosis was ruled out. We found chronic inflammatory changes in the lower respiratory tract by bronchoscopy, almost akinetic cilia by HSVA, and absent outer dynein arms (ODA) in the ciliary axoneme. Genetic testing detected a mutation of the gene DNAH5, which is the PCD disease-causing abnormality. During the following years, the patient experienced recurrent infections of the respiratory tract. There was an evident shift from antibiotic-susceptible to resistant strains, from community-associated to nosocomial bacteria, and from primary to secondary pathogens. The airways were gradually colonized by, e.g., Streptococcus pneumoniae, Pseudomonas fluorescens, Stenotrophomonas maltophilia, MRSA, and other species. In February 2018, she went through an exacerbation with desaturation and weight loss. A chest X-ray revealed a new infiltration of the basal and retrocardial region of the left lung and severe atelectasis of the right lower lobe (Figure 2).

Partial clinical recovery occurred only after the administration of several antibiotics (piperacillin-tazobactam, clindamycin, ciprofloxacin, and co-trimoxazole). After cefotaxime, an extensive skin rash appeared, which was confirmed as a symptom of allergy to cephalosporins. In October 2018, another severe exacerbation with poor response to therapy occurred. Moreover, ECG examination revealed prolongation of the QT interval, later confirmed as a result of KCNQ1 mutation. At that time, Exophiala dermatitidis appeared in the sputum. Due to little data about isavuconazole, poor accessibility, and unavailability of laboratory testing and level monitoring, we decided for oral posaconazole and nebulized amphotericin B with continuous monitoring. The patient tolerates the treatment with no cardiac events.

Nowadays, she receives oxygen therapy, antimicrobial, mucolytic (6% saline solution for inhalation), and bronchodilation treatment (tiotropium), intensive chest physiotherapy, and long QT syndrome medications (propranolol). Her pulmonary functions improved significantly with this treatment. She has become stable, and her quality of life is good. The polymicrobial colonization of the lower respiratory tract persists, together with respiratory failure (Figure 3), brown purulent sputum (Figures 4 and 5), atelectases, and bronchiectases of the lower lobes (Figure 6).

The long QT syndrome acts as an obstacle for the treatment because many medications induce its prolongation, thus increasing the risk of tachyarrhythmias and sudden death. Surgical resection of the most affected lobes is not recommended due to the possible worsening of preconditions for future lung transplantation (diaphragm ascension).

Further prognosis depends on the success of future lung transplantation that will probably be recommended. In the next exacerbations, isavuconazole will be a candidate treatment due to the shortening effect of the QT interval.

Exophiala dermatitidis is a slow-growing dimorphic fungus. Microscopically, it’s characterized by septate hyphae and pseudohyphae with oval conidia, notably pigmented with melanin, which is a virulence factor and gives the colonies the characteristic appearance of mud drops (Figure 7). Its virulence is varied. It may have a marked mucous capsule (Figure 8), which helps to form biofilm [1]. 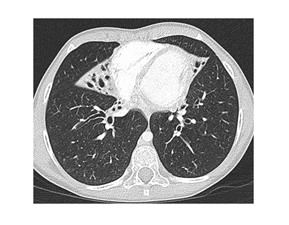 Figure 1: HRCT, performed in September 2013. Bilateral atelectases with bronchiectases of the right middle lobe and lingula. 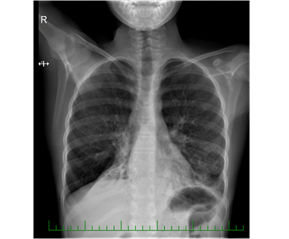 Figure 2: Chest x-ray, January 2018. Infiltration of the basal and retrocardial region of the left lung and severe atelectasis of the right lower lobe. 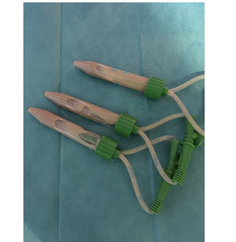 Figure 5: The presence of Exophiala dermatitidis results in the brown color of this BAL sample. 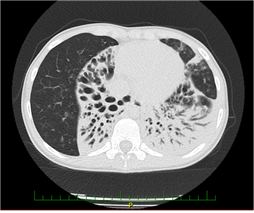 Figure 6: HRCT of the chest, November 2018: atelectasis with bronchiectasis, affecting most parts of both lower pulmonary lobes. The right middle lobe is also completely affected, as well as major parts of the lingula; borderline bronchiectases can be seen in the upper lobes. 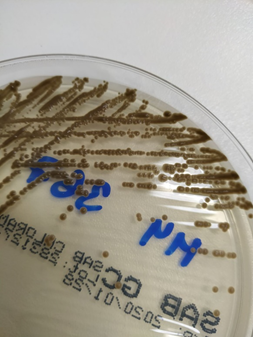 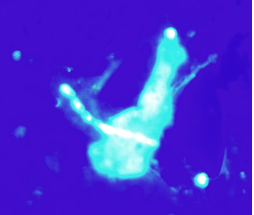 Figure 8: Sputum specimen in fluorescence microscopy, calcofluor stain. A cluster of detritus and a pseudohypha of Exophiala dermatitis with a well visualized mucous capsule.

In humans, it is known chiefly as a pathogen of the skin [2], but it also invades inner organs like the brain [3], mainly in immunocompromised persons [4] or specific gene defects carriers like CARD9 [5]. It colonizes the airways of some patients with cystic fibrosis [6] or other chronic illnesses of the lower respiratory tract [7]. PCD also represents a suitable space for Exophiala, but no such patient has been reported. The treatment can be topical or systemic. In systemic or focal infection inaccessible to surgery or topical treatment, voriconazole, posaconazole, or liposomal amphotericin B can be used [8]. Combination therapy of caspofungin with voriconazole, amphotericin, or itraconazole may improve the effect, although monotherapy with an echinocandin is not recommended [9, 10]. Lung transplant is the only solution for the most severe cases. Nevertheless, cases of successful decolonization have been described in cystic fibrosis [11]. In patients with QT prolongation, azole antimycotics must be used carefully. These drugs carry a high risk for QT prolongation and the uprise of tachyarrhythmias: itraconazole, fluconazole [12], ketoconazole, voriconazole, and posaconazole [13]. But there is an azole antimycotic with the opposite effect: isavuconazole, as recent data show, shortens the QT interval [14, 15].

This research was supported by: