The thermodynamic properties of binary liquid mixture of 2-Bu-OH and Cumene (isopropylbenzene) have been determined at different temperatures (298.15-323.15) by 5K intervals over the whole composition range. The data have been utilized to estimate the excess thermodynamic properties (excess enthalpy, excess entropy, excess free energy). The excess values have been found to be useful in estimating the type and strength of the interactions between the polar-nonpolar binary mixture.

From the past few decades liquids have been studied extensively by both theoretical and experimental techniques using various physico-chemical properties. The practical nature of liquid mixtures rather than single component liquid systems, has gained much importance in assessing the nature of molecular interactions and investigating the physico-chemical behaviors [1,2]. In chemical process industries, materials are normally handled in fluid form and as a consequence, the physical, chemical, and transport properties of fluids draw attentions. Thermodynamic investigation of liquid mixtures consisting of polar and non-polar components is of considerable importance in understanding intermolecular interaction between the component molecules and in processing product formulation in several industrial and technological purposes. 2-Butanol (or 2-Bu-OH), is an organic polar compound normally found as an equal mixture of the two stereoisomers [3], a racemic mixture of (R)-(−)-2-Bu-OH and (S)-(+)-2-Bu-OH [4]. This secondary alcohol is a flammable, colorless liquid that is soluble in water and completely miscible with polar organic solvents such as ethers and other alcohols [5,6]. Cumene is also a colorless, flammable hydrocarbon but nonpolar liquid. It is an aromatic hydrocarbon, based on benzene having isopropyl substituent on the aromatic ring.  It is part of the aromatic family and has a distinctive odor. The common uses of cumene are as solvent, dissolvent, fragrance intermediate [7]. Cumene is primarily used as a feedstock in the manufacture of phenol [8]. In view of this importance, it is of interest to study the thermodynamic properties in order to understand the interaction behavior in their binary mixtures of various proportions with the variation of temperature. In this paper, density and viscosity for the binary mixtures of 2-Bu-OH with Cumene at (298.15, 303.15, 308.15, 313.15, 318.15, 323.15) K are provided. From the experimental values of density and viscosity, thermodynamic properties and their excess thermodynamic properties have been estimated. The result of excess properties viz: excess enthalpy of activation (DH#E), excess entropy of activation (DS#E) and excess free energy of activation (DG#E) were fitted to the Redlich-Kister equation [9] and plotted by graphical presentation.

All the chemicals used in this study were purchased from Sigma Aldrich Chemicals Company. According to the manufacturer, the purities of these compounds were >99%. The water used in all experimental work was double distilled water. The binary mixtures of 2-Bu-OH and Cumene were prepared by using an analytical electrical balance with a precision of ± o.1 µg and later were converted to different composition of the mixture using dilution method. Special care was taken to prevent evaporation and the introduction of moisture into the experimental samples. To measure the viscosity Stabinger viscometer (svm-3000-stabinger-viscometer) was used. The temperature was previously set up by 298.15-323.15 K. The measurement was accomplished by the descending of the temperature in the viscometer. Density of all binary mixtures including pure solvents was measured using an oscillation densimeter (Anton Paar DSA 5000). In both machinery processes the temperature was automatically controlled with an uncertainty of ±0.01K.

Liquid in a tube is considered as a combination of layers and that it flows as a rate process. To treat the viscosity as a rate process it is assumed that the motion of liquid layers involve the passage of a molecule from one equilibrium position to another in the same layer. In order to do so, it is necessary that a suitable ‘hole’ or site should be available and the production of such a ‘hole’ requires the expenditure of energy, since work must be done in pushing back other molecules. The jump of the moving molecules from one equilibrium position to the next may thus be regarded as equivalent to the passage of the system over a potential barrier. Eyring and his co-workers using absolute reaction rate theory and partition functions, correlated viscosity [10], as follows:

The free energy of activation, DG#, for viscous flow has been calculated by using the simple thermodynamic relation,

Where, the subscripts 1 and 2 represent the pure components of the mixture.

The experimentally obtained values of excess properties for a system can be fitted by the least square method using Redlich-Kister Eq. (13) of the form:

4.1 Density and Viscosity of the binary mixture

The density and viscosity values of binary mixture as a function of the mole fraction of 2-Bu-OH(x1) respectively at temperatures (298.15 to 323.15) K are listed in tables 1 and 2. The corresponding plotting of these values are displayed to observe the trend of changing these properties by figures 1 and 2. The changes of the properties are evaluated for the changes of each proportion of the mixture component along with the variation of temperatures. 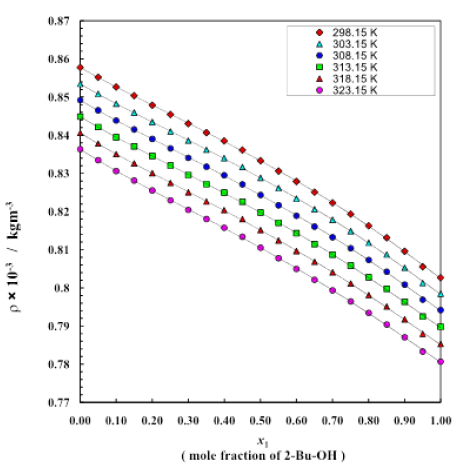 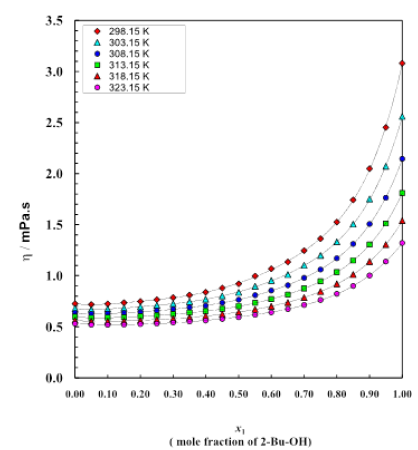 The three types of very important thermodynamic properties viz. enthalpy, entropy, and free energy were very intensively studied for the binary mixture of polar + nonpolar interaction. There excess values were also calculated and fitted in Redlich-kister fitting equation (eq.13). The overall data are provided by tables 3-10. The trend of changing due to miscibility is displayed by figures 3-8. Table 3 is for enthalpy study and its corresponding plots are by figures 3,4. Table 4 is for entropy study and it’s corresponding plots are by figures 5,6. Data for the free energy study of this binary mixture were provided by tables 5-10 and corresponding plotting are shown by figures 7,8. 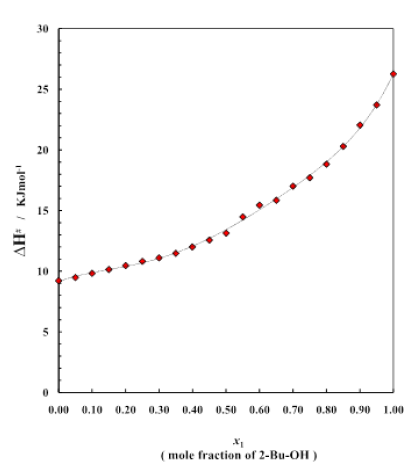 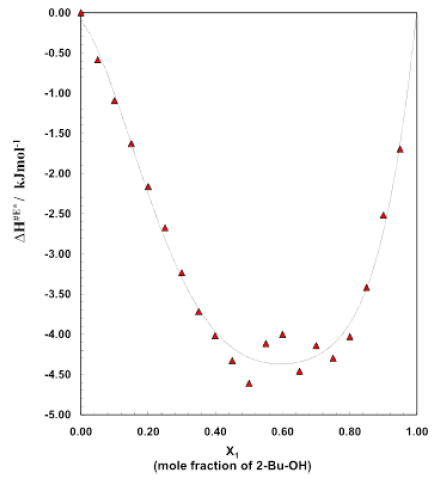 Figure 3 shows the plot of enthalpy of activation ΔH# for the transport process vs. mole fraction of alcohol for the system over the whole range of composition (0 to 1). It is noticed that for the binary system ΔH# value (table 3) continues to rise on addition of alcohol and eventually reach the value of pure 2-Bu-OH because H-bonded liquids, like 2-Bu-OH always require higher enthalpy for activation than that of the other low polar or nonpolar liquids. The excess enthalpies of the binary mixtures of aromatic hydrocarbons with 2-Bu-OH are represented by the figure 4. The excess enthalpy of activation for viscous flow (ΔH#E) show the negative values extended over a considerable region of concentrations. 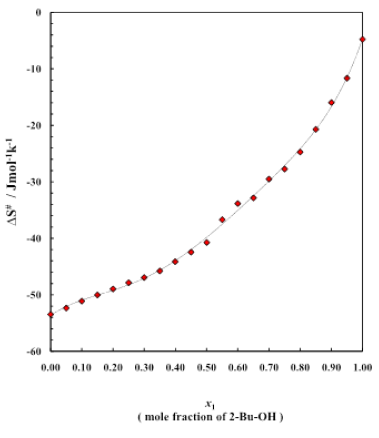 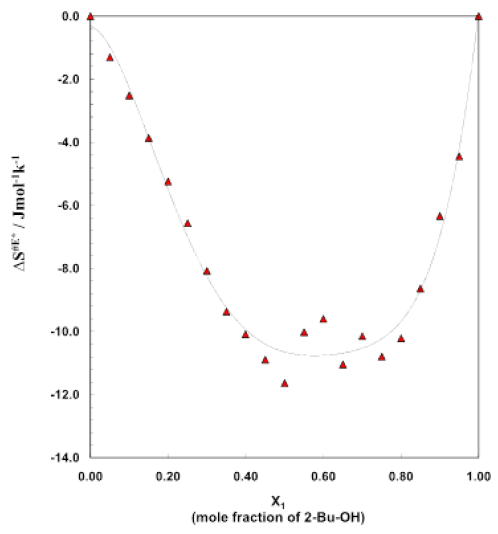 Figure 5 is for the plots of entropy of activation ΔS# for the viscous flow vs. mole fraction of alcohol for this binary system. The corresponding data are listed in table 4. The typical nature of the small and negative (ΔS#) value of alcohol indicates that during the viscous flow of initial H-bonded order breaks down to form the activated complex of little ordered structure. On the other hand, negative (ΔS#) value for the aromatic hydrocarbons revealed that during the flow process the activated complex formed, are much more ordered than of the initial state. Figure 5 also reveals that with increases of concentration of alcohol, the negative value decreases for the binary system of 2-Bu-OH + Cumene respectively. It indicates that during the flow process at the certain composition of mixtures, the molecular order of the activated and inactivated state for each of the mixtures is same. The excess entropy ΔS#E of activation for the system are shown (Figure 6) as a function of mole fraction of 2-Bu-OH. The plot of ΔS#E vs. mole fraction of 2-Bu-OH (Figure 6) for the binary mixture show an almost similar trend at those of the excess enthalpy (ΔH#E). The curve has been found to be concave in nature. The negative excess entropy signifies that the species formed in the activated state are more ordered than what is to be expected to the additive law. 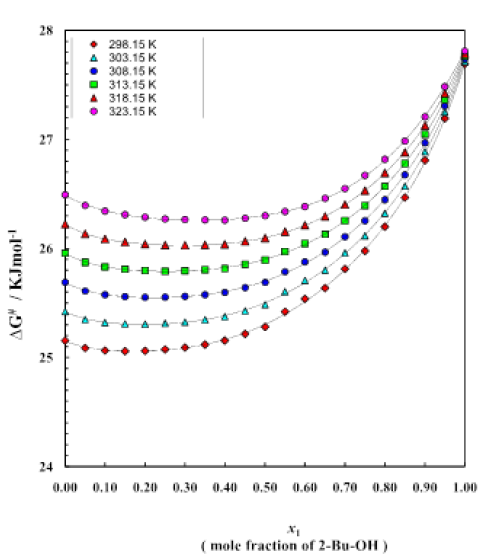 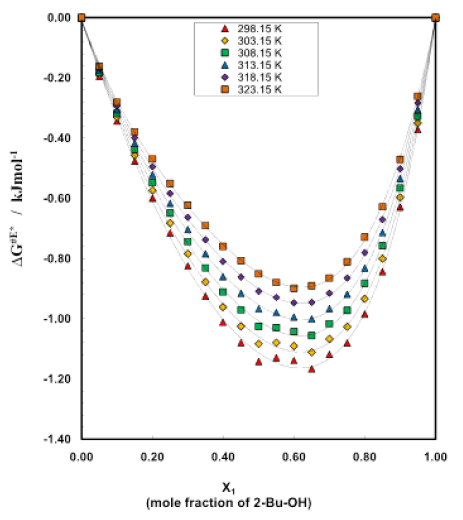 Tables 5-10 show the variation of free energy of activation ΔG# for the viscous flow of the system as a function of 2-Bu-OH under the whole range of composition at temperature 298.15 K to 323.15 K. And trend of changing this thermodynamic property are given by figure 7. The ΔG# values increase very slowly in the initial stage which is followed by a relatively greater rise with increasing concentration of 2-Bu-OH. The curves for ΔG# for the system are found to be smooth and similar. But a crossover of curves between temperature 298.15 K and 323.15 K is noticed in the system at higher mole fraction of 2-Bu-OH. It is also revealed from the figure 7 that the nonpolar (Cumene) rich region the ΔG# values increase slightly with the rise of temperature but at the alcohol rich region it is vice versa. Figure 8 shows the variation of excess free energy ΔG#E of activation at 298.15 K to 323.15 K over the whole composition range for this binary system (Table 5-10). In each case, the ΔG#E values are negative, but with the rise of temperature, the values are less negative, i.e., (δΔG#E/ΔT)p is positive. The general nature of the curves does not virtually change with the variation of temperature. The negative excess free energies indicate according to the Eyring

that the viscous flow of the solutions of the aromatic hydrocarbons in 2-Bu-OH is enhanced, causing the viscosity to decrease from the values expected ideally.

The excess values throughout the whole concentration range are negative with minima falling around 0.62 mole fraction of 2-Bu-OH. The free energy of activation is often regarded to be an energy barrier that a molecule must surmount in order to make a hole which is a necessary requirement for a molecule to flow through [11]. The negative excess free energy indicates the reduction of energy barrier height and hence increases of viscous flow.

The properties of binary liquid mixtures are of interest to experimental chemists and physicists and to the pharmaceutical as well as chemical industries [12,13]. An understanding of the thermodynamic properties of 2-Bu-OH and Cumene and their binary system have been measured at temperatures (298.15 to 323.15) K and in atmospheric pressure. Excess thermodynamic properties of binary mixture solvents were calculated and fitted with the Redlich–Kister equation. Besides knowing the very important thermodynamic behaviors of the liquid mixture at different proportions we also got some ideas about the polar-nonpolar interactions between these mixing components which are mainly for dipole–induced dipole interaction thus breaking of self-network built by H-bond among the polar molecules and rising dispersion force of nonpolar liquid. The observed excess values (excess enthalpy, excess entropy, excess free energy) in all the mixture indicate the significant interaction between the unlike molecules. Cumene is comparatively highly densed than 2-Bu-OH and the almost linear decreasing trend is observed with the addition of 2-Bu-OH as well as with the increasing of temperature (Figure 1). From table 2 and figure 2 it can be observed that viscosity of the binary mixture of 2-Bu-OH + Cumene increases in very disciplined way with the increasing proportion of 2-Bu-OH but decreases almost linearly with temperature rises.  Here the nonpolar Cumene is low viscous liquid and when it interacts with the polar one it breaks the intermolecular network of the 2-Bu-OH which was built due to a lot of H-bonds and by polar-polar interactions between adjacent molecules. There was an induction of polarity occurred in Cumene and become induced dipole and attached to the polar 2-Bu-OH. Thus, the liquid mixture becomes more viscous than individual Cumene. From figure 2 the rising of viscosity was first observed slowly but when the polar proportion is higher it rises sharply upward.

This work was the partial fulfillment of academic degree of Master of Science of Md Sydur Rahman, financially supported by department of Chemistry of University of Chittagong and still the project is running in other significant areas of investigation. Teachers of this department and lab mates helped us in many ways during this research work to make it successful.