Impact of Endometriosis on Pregnancy and Delivery- A Retrospective Cohort Study

Impact of Endometriosis on Pregnancy and Delivery- A Retrospective Cohort Study

Objective: To clarify if endometriosis, especially deep infiltrating endometriosis (DE), in our cohort is associated with increased risk of obstetric complications.

Conclusion: Endometriosis is associated with an increase in obstetric complications. DE does not increase risks additionally. Mode of delivery should not exclude vaginal delivery per se.

All surgical endometriosis cases from our department from the period 2009 until 2016 were identified from patient records. As an internal control group, patients from the same period undergoing laparoscopy because of infertility during which endometriosis was excluded, were equally identified from patient records. Both groups received similar questionnaires by mail asking patients to report on any additional treatment regarding endometriosis as well as infertility, occurring pregnancies, mode of delivery and complications during pregnancy, delivery and puerperium. Those patients not responding to the questionnaires were offered a telephone interview if they gave their consent. The possible specific influence of deep infiltrating endometriosis (DE) rated using the ENZIAN classification [6,7] for better understanding of the severity of DE cases, on pregnancy and its outcome was analysed. The Clavien-Dindo-classification was used to describe the complications reported [8-10]. Cesarean sections were not considered a complication or surgical intervention in the sense of the Clavien-Dindo-classification. There was no analysis of fetal or neonatal outcome performed in the study. 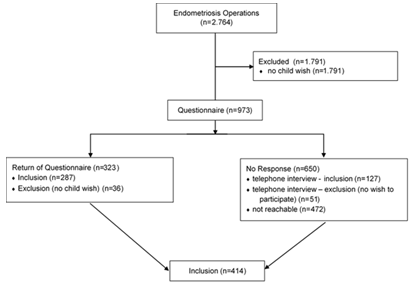 Patient characteristics, pregnancy rate and pregnancy outcome are reported in table 1. Median age when giving birth and relative number of pregnancies were similar in cases and controls. Secondary caesarean sections were more frequent in cases achieving pregnancy by ART (p=0.04). Birth by primary caesarean section seemed to be more frequent in controls as well as generally in case of conception by ART but these differences were not statistically noticeable (p=0.202 / p=0.092). Natural birth was similar between groups but it was more frequent in cases with natural conception as well as controls with ART (p=0.009). Miscarriage rate was higher in patients from the control group (p=0.038), especially in the subgroup with natural conception (p=0.011).

Table 2: Complications according to Clavien-Dindo-classification and details on complications (n>3; nsn: not statistically noticeable).

Limitations of this study mainly are due to limited sample size, retrospective design of the study, data collection being dependent of patient participation, response rate, the internal control group suffering from infertility and possibly differing surgical techniques between the surgeons involved.

This study shows that women with endometriosis and adenomyosis have a higher risk of miscarriage and caesarean section compared to published controls from the general population. This however varies depending on the location of endometriosis lesions. Especially women with adenomyosis, who also suffer from prolonged labour, are often in need of a caesarean section. The risk for placenta praevia and placental abruption seemed to be higher in case of endometriosis and even more so in DE than in the average population. The risk for bleeding during all stages of pregnancy and delivery was much higher for women suffering from endometriosis. Also early uterine contractions and cervical insufficiency occurred noticeably more often. According to the Clavien-Dindo classification severe complications did not occur more often during the pregnancy of women with endometriosis, however mild to moderate complications were more likely to happen. DE of the rectovaginal space, the vagina and the rectum did not seem to increase the risk of severe lacerations during vaginal delivery. Counselling of endometriosis patients with regard to pregnancy and delivery is recommended. Patients should have access to specialized centers of care also with regard to pregnancy and delivery as increased risks are reported. Recommendations regarding mode of delivery should not exclude vaginal delivery in case of DE.

All authors confirm that the corresponding author Sebastian Daniel Schäfer, MD PhD and the co-author Mr. Moritz Berkenkamp contributed equally to this work