Background: Gestational Diabetes Mellitus (GDM) accounts for the majority of cases of diabetes complicating pregnancy. This study aimed to delineate the levels of knowledge and practice about GDM management among the nurses of Dhaka, Bangladesh.

Method: This cross-sectional study was conducted among 427 nurses of three healthcare centers of Dhaka city. Data were collected by semi-structured questionnaire through face-to-face interview. All data were analyzed through descriptive and inferential statistical techniques. Knowledge and practice scores were categorized as poor (Mean+1SD) by predefined scores.

Conclusion: The results revealed that there is a gap of knowledge and practice about the management of GDM among nurses’ capital of Bangladesh. Capacity building training should conduct regularly for young graduate nurses so that they can apply knowledge properly in the practice area.

Gestational diabetes is a significant medical problem in this 21st century, a large portion of the population is living with diabetes around the world [1]. In 2019, it was assessed that 463 million individuals have diabetes and this number is projected to arrive at 578 million by 2030, and 700 million by 2045. It is expected that 15.8% (20.4 million) of live births are influenced by hyperglycemia in pregnancy in 2019 of which 83.6% were because of Gestational Diabetes Mellitus (GDM), even though 7.9% were the after effect of diabetes recognized before pregnancy and 8.5% because of diabetes type 1 and type 2 are first identified in pregnancy [1]. South-east Asia (SEA) is considered the epic center of the diabetes epidemic, containing most of the populous countries in the world, securing demographic, epidemiologic, and socio-economic [2, 3]. Bangladesh is a developing country with an increased prevalence of diabetes, including GDM [2, 3]. As a SEA country, the pre-valence of GDM takes grew in Bangladesh. Several population-based studies showcased Bangladesh at different time points, exposing an increasing trend of GDM prevalence ranging from 6% to 14% according to the usage of different diagnostic criteria [2, 3].

The prevalence of gestational diabetes (GDM) goes from 8.2% in rural Bangladesh to 12.9%. Especially undiagnosed instances of women with diabetes in pregnancy are a critical worry in Bangladesh, where the economic wellbeing of women is low bringing about imbalances in regards to medical services access and sustenance [4]. According to International Diabetes Federation (IDF) report in 2017, it is assessed 21.3 million or 16.2% of live births to women in 2017 had cases of hyperglycemia in pregnancy, 86.4% cases were reasons for gestational diabetes mellitus (GDM), 6.2% produced for diabetes recognized before pregnancy, 7.4% emerge due to different sorts of diabetes (counting type 1 and type 2 diabetes) first distinguished in pregnancy [5]. The SEA region having the highest prevalence at 24.2% associated with 10.4% in the Africa Region. Maxi-mum (88%) cases of hyperglycemia were discovered in the pregnancy period, mostly happening in low and middle-income countries, maternal care is limited [5]. In Bangladesh, 7-14% of women are victims of diabetes in their reproductive age [6, 7]. The Fasting blood glucose (FBG) ≥ 5.8 moll/l in pregnancy are connected to the risk of intrauterine death [8]. Multiparous women showed a high prevalence of GDM (∼13%) [9]. Maternal mortality increased for Hyperglycemia/GDM, leading to chances of the high rate of maternal morbidity, high rate of perinatal, neonatal morbidity, and after a long term, conseq-uences for both mother and child. Tertiary hospitals for health providers occur due to a lack of services, it’s essential to have information with knowledge and practice on GDM management for nurses that are the main responsible people, but no published study was discovered to assess this issue in the Bangladesh context. This study was planned to assess the know-ledge and practice on GDM management among the nurses. Studies of this information should help to plan and implement a sustainable health program to combat GDM.

This cross-sectional study was adopted based on descriptive approach. Semi-structured data were collected to portrait the knowledge and practice of gestational diabetes mellitus management guidelines among the nurses of capital Bangladesh.

A total 427 nurses were randomly enrolled in this study. Data were collected from three selected terti-ary level healthcare centers i.e. Maternal & Child Health Training Institute, Institute of Child & Mother Health and Dhaka Medical College & Hospital of Dhaka city of Bangladesh. Initially it was assumed that a potential standard sample size 384 would be taken by using the formula “n= ‘Z2pq/d2” where Z (standard normal deviate) considered as 1.96; p (the prevalence of knowledge and practice of gestational diabetes mellitus management guidelines) was un-known and was considered as 0.50 and margin of error was considered as 0.05. With a minimum cal-culated sample, an additional 11% was added as cushion to take into account non-response and ques-tionnaire error factors and the final samples were 427. Study subjects were selected by systematic rand-om sampling from the selected nurses list of the health facilities followed inclusion criteria.

Data were gathered by pre-tested, semi-structured and interviewer-administered questionnaire. Inter-view was administered in an out-patient department setting by using a face-to-face technique. The survey was administered in local Bengali language with the utmost support of the hospital authority.

This study was approved by the Ethical Review Committee of the Bangladesh University of Health Sciences (memo no: BUSH/BIO/EA/19/165) and conformed to the Declaration of Helsinki. Participa-tion of the respondents was anonymous and volun-tary. Informed consent was sought from the respon-dents at the beginning of the survey and participants could withdraw from the survey at any time.

A three-section questionnaire was developed by the researcher. The question was drafted according to the specific objectives, and variables. The first section was containing socio-demographic information of nurses; the second section was about basic and technical knowledge related question on GDM and the third section include practice-related questions of GDM. The questionnaire was finalized after comple-ting the pre-test. The knowledge related to the mana-gement of the GDM questionnaire was validated by the Bangladesh University of Health Sciences (BUHS) and was modified for the data collection. Variables were also basically modified according to the local guidelines for GDM management which document was developed for the GDM management in 2012 by the WDF-GDM (World Diabetic Foun-dation-Gestational Diabetes Mellitus) project sup-orted by Bangladesh Diabetic Association (BADAS). After the development of this document, it was distributed among 3800 health care providers in 64 districts of Bangladesh through 18 training programs.

3.2 Level of knowledge and practice among the respondents

Table 2 shows that, on bivariate analysis, a positive and significant (p<0.05) association was found bet-ween basic knowledge regarding GDM management and respondent’s gender, level of education & work-place status. Findings also indicated that the female participants, whose education level was Diploma in Midwifery and whose workplace status was autono-mous, had a poor level of basic knowledge. However, there was no significant association with marital status, monthly family income, and basic knowledge. This table showed that those who were unmarried, had monthly family income between 30,000/- to 40,000/- BDT had a poor level of basic knowledge.

The data of Table 3, shows that only there was a sig- 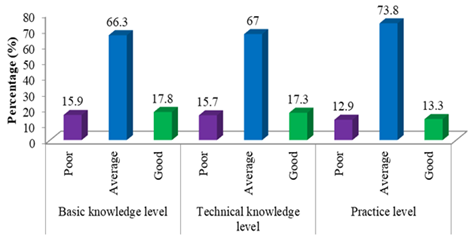 Figure 1: Level of knowledge and practice among the respondents.

Table 2: Association between levels of basic knowledge with socio-demographic characteristics among the respondents (n=427).

Table 3: Association between levels of technical knowledge with socio-demographic information among the respondents (n=427).

Table 4: Association between levels of practice with socio-demographic information among the respondents (n=427).

The present study revealed or found that the level of practice among 427 respondents, majority 73.8% of the respondents were average practice group, and minority 13.3 % of the respondents were good prac-tice groups. This is similar to another study conduc-ted in Morocco to find after diagnosing GDM, 88.5% of providers refer patients to specialists, and only 11.5% treat them as outpatients. There was a signify-cant association with the respondent’s gender, level of education and a workplace with basic knowledge regarding GDM management. However, there was no association with marital status, monthly family income, and basic knowledge (Table 2). The data shows that there was a significant association with the level of education and marital status of respon-dents with technical knowledge (Table 3). The data revealed that only there was a significant association with the respondent’s practice and monthly family income (Table 4). This is similar to another study conducted in Morocco to found 56.8% of the doctors had some pre-service training on gestational diabetes, most nurses and midwives lack such training. Only 36.1% of 97 health care workers who answered the question related to training stated their pre-service training included aspects of GDM. Overall, 56.8% (21) of doctors reported being taught about GDM during their studies whereas only 23.3% (14) of the nurses and midwives stated they did receive any pre-service training on GDM [10].

This study revealed that the majority of the nurses had an average level of basic (66.3%) and technical (67.0%) knowledge as well as practice (73.8%). Moreover, results indicated that poor level of basic, technical knowledge and practice were more visua-lized among the female and unmarried participants, those with completed Diploma in Midwifery course, who worked in autonomous organizations, resided in the urban area and monthly family income was within 30,000/- BDT.

This study recommends that, as the number of female nurses in the nursing profession is high and many patients are under pressure in the tertiary hospitals of the city, they have to be under a lot of workloads. Therefore, to reduce this workload, there needs to make an administratively specific plan. The nurses who are unmarried and have completed the diploma course they need to further increase their knowledge through professional training. Then they will be able to ensure the better services of GDM patients inclu-ding all types of patients properly. Finally, there need to proper educational training about the GDM mana-gement guideline and preventive measure to decrease the prevalence and complication rate of GDM. More-over, a strong follow-up system needs to introduce to increase the practice level to manage GDM properly.

Acknowledgement to all the study participants.

The authors declared that there was no conflict of interest.